Can people close to Gazprom stand behind the ransom of Belarusian Paritetbank from Mikhail Gutseriev's son?

According to a correspondent for The Moscow Post, Russian businessman Said Gutseriev (son of Mikhail Gutseriev) left the capital of the Belarusian bank Paritetbank. He sold 99.83% of his shares to another Russian businessman - Rasim Ismailov. The latter, presumably, is a relative of Ruslan Ismailov, who is a business partner of Matvey Briling, seen in an ugly story with not entirely friendly attempts at absorption.

Brilling built a successful career, including thanks to his father George Briling, a native of Gazprom structures, who at one time successfully privatized the monopolist's assets. It turns out that now Paritetbank could leave people close to the gas giant.

Said Gutseriev owned the bank through Beristore Holdings Limited since April 2020, having bought a stake from the state property committee of Belarus. But in June, EU and UK sanctions were imposed against the father of Said Gutseriev, billionaire Mikhail Gutseriev. Actually, this now explains why Said Gutseriev said goodbye to the Belarusian asset - because he does not miss his father's fate.

Now the bank is under the control of Rasim Ismailov, a relatively young financial manager, managing partner in the consulting company AC-S. Now Ismailov is a member of the expert council at the State Duma Committee on the Financial Market. Previously, he worked in the banking and in the financial sector as a whole - in particular, he was vice president and adviser to the chairman of the board of Anchor Bank, who is associated with the Russian confectionery "king" Andrei Korkunov.

Rasim Ismailov is the founder of the MFI "Money for Hire." This organization worked in the market of microfinance companies under the legal entity of Credit Union CJSC. On the official website of the company you can find letters of thanks issued to Rasim Ismailov.

According to Rusprofail, the founder of Credit Union CJSC was Ismailov Ruslan Arif Ogly. Now a person with this name holds the position of deputy general director of the Russian retail chain Magnit, he is a member of the board of one of the largest retailers in the country, once worked at Mosmart. Whether the Ismailovs are relatives to each other is not known for certain. But, apparently, it is. 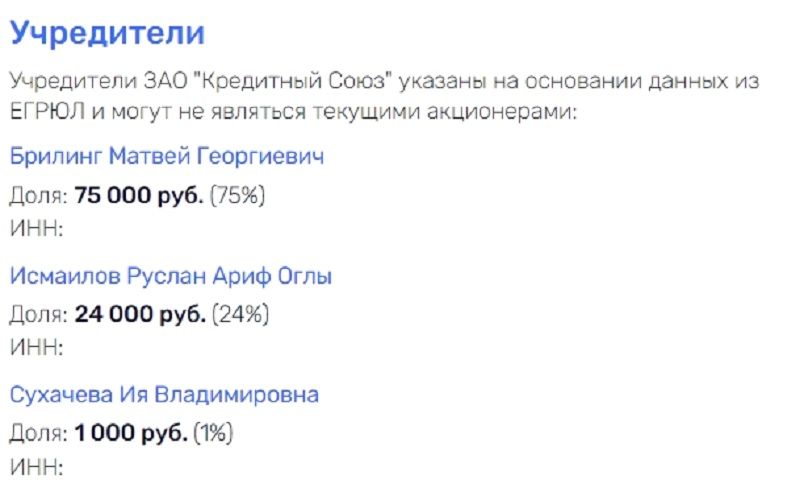 Another notable figure consisting of the founders of Credit Union CJSC is Matvey Brilling. It is clear how he knows Ruslan Ismailov: together they worked at Mosmart. Father and son

Another notable figure consisting of the founders of Credit Union CJSC is Matvey Brilling. It is clear how he knows Ruslan Ismailov: together they worked at Mosmart. At the same time, Brilling was noted there with very specific merits.

From 2009 to 2010, Brilling led the Mosmart retail chain. The retailer approached the summer of 2009 with a net debt of 9.6 billion rubles, of which 3 billion Mosmart owed to suppliers and 6.6 billion to credit organizations. In June 2009, Sberbank Capital, together with the Bacarella fund of Yevgeny Novitsky, became the owners of 51% and 10% of Mosmart shares, respectively. It was planned that Sberbank will restructure part of the retailer's debt and support it with new financing.

But then, as thunder in the clear sky, Brilling appeared. And things went into tartarars with him: literally two months after his arrival in the company, about 60% of the staff resigned from the retail chain. Ultimately, in December 2010, the Moscow Arbitration Court declared the retailer bankrupt. This is the "effective" manager Brilling!

And for some reason, no questions appeared to Briling then, although everyone knew on the market that before Mosmart, the top manager had no experience in retail, and his appointment was directly connected with the figure of his father George Brilling, a native of Gazprom. Do children of such influential people have much to say goodbye to?

A few months later, Matvey Brilling decided to engage in consumer lending. The loan union "Rent Money" in the best traditions of moneylenders provided citizens up to 30 thousand rubles at 700% per year. Money was given to people who could hardly take loans from banks. So, Matvey brilling earned from the most vulnerable segment of the population?

But then something was wrong. In September 2016, the Money Rental Credit Union was declared bankrupt. Then creditors knocked on Matvey Briling: PJSC M2M Pryvet Bank insisted on recovering $2.8 million from Matvey Briling. After that, miraculously, Brilling found himself an influential senior companion. It became Evgeny Bugaev - the father of his wife Julia (it is not known whether they are still married or not).

Evgeny Bugaev, together with his brother Vladimir and half-brother Yakov Eroshevsky, were joint shareholders. One of the assets was the largest producer of food additives in the country - St. Petersburg LLC Khimpishchearomat.

At the time of Matvey's appearance in the Bugaev family, LLC had already become the property of Jacob Eroshevsky by the peaceful decision of the brothers to withdraw from the shareholders of Phoenix Pharmacy Limited, which controlled Khimpishchearomat. But by the end of 2014, a dispute began over the transfer of rights, initiated by Yevgeny Bugaev. Then there was talk that in fact Brilling Jr. was behind the situation, who quarreled his new-found relatives.

Yevgeny Bugaev began to try to challenge transactions from 2012 on the assignment of his joint-stock shares in Phoenix Pharmacy Limited, which at one time controls the company Khimpishchearomat, as a result of which Eroshevsky became the main owner of Phoenix and the sole owner of Khimpishchearomat.

According to the Version, law enforcement officers recognized Eroshevsky as a victim in a criminal case, where "an unidentified person intended to mislead the court in order to get a court decision in his favor...." In parallel with this, Brilling did not abandon attempts to challenge the transfer of shares of the plant from Cyprus Phoenix to Russia, that is, return Khimpishchearomat back to offshore. What is this, if not an attempt at an unfriendly takeover?

"In general, the attack on the plant is very reminiscent of the schemes of attacks by ordinary raiders on other enterprises - through the purchase of shares by controlled persons, the introduction of their people into the management bodies of the company, followed by the bankruptcy of the enterprise, the sale of its property or simply resale," - quotes the words of lawyer Yulia Logunova Lenta.ru.

Well, then even more interesting: Matvey Briling turned out to be the creditor of his father-in-law Bugaev. In May 2016, he granted Briling's lawsuit against a relative to collect debt. At the same time, according to some reports, this did not become the reason for the termination of communication between businessmen, and they still communicate well. And this may indicate that entrepreneurs had some kind of agreements.

And it would be very convenient if Bugaev's relatives and ex-partners wanted to recover anything from him. And already, probably, there is nothing - all the money was in Brilling's account?

"Hello" because of the bugle

And his father George could teach how to store eggs in different baskets of Brilling Jr. At the beginning of the zero, George Brilling took part in the operation to acquire the assets of nitrogen enterprises owned at that time by Mezhregiongaz, which is part of Gazprom. Thus, at the end of 2002, gas workers lost control of the Azot holding company, which at that time included the Kirov-Chepetsk Chemical Plant (KCHhK). The company also owned the shares of the largest enterprises in the industry - Perm Minudobreniya, Bereznikovsky and Cherepovets Azotov. By the way, during the "redistribution" of Gazprom property, Matvey Briling fell into a real detective story. According to Kommersant, in January 1998, unknown persons stole him and demanded a ransom of $50 million. Brilling Jr. then escaped from the attackers, jumping out of the window of the third floor and breaking both legs. Then there was talk that the youngest of the Brillings was kidnapped for the debts of the elder.

However, soon control over the "Nitrogen" was lost, and the participants in the operation to acquire it had to flee the country, wrote Lenta.ru. According to the latest data, George Briling has not yet returned to the expanses of the Motherland. Nevertheless, he can maintain ties with the gas monopolist. So is it Gazprom guys who are now interested in Paritetbank?

And this may indirectly indicate the existing links in the Gutseriev family in the gas monopoly. And indeed, businessmen collaborated with Gazprom: as Kommersant wrote, Mikhail Gutseriev planned to purchase gas from Gazprom's subsidiary, Gazprom Transgaz Belarus, for the Slavkali potash complex.

In addition, last year it became known that Yulia Golubeva, who led the Krutoy Media radio holding for more than 20 years (controlled by Gutseriev), became an adviser to Gazprom-Media CEO Alexander Zharov. The former top manager could bring Gutseriev with influential people from Gazprom?

It is worth noting the parallels in the biographies of the elders Gutseriev and Brilling. The latter at one time had to move away from business, and at the same time his son began to build a successful career. Because of the sanctions, Mikhail Gutseriev is now rewriting assets on his relatives, including his son Said.

And while the "elders" seem to be retiring, the younger generation can successfully cooperate with each other. Should Matvey Briling and Said Gutseriev expect joint projects?