"Theater" of one Mikhalkov

Nikita Mikhalkov gives Moscow "gifts" at a budget expense, swimming in luxury and not remembering the people who started with him, but were not rich enough and influential for friendship with the famous director.

According to the correspondent of The Moscow Post, a giant of domestic cinematic thought, the head of the Union of Cinematographers of the Russian Federation Nikita Mikhalkov is preparing for a significant event - the restoration of the Theater and Cinema Center on Povarskaya Street in Moscow. The institution is also known as the Film Actor Theater under the direction of Mikhalkov. Yesterday, the city hall announced the corresponding competition.

4.5 billion rubles were allocated for the work from the budget, and the work plan for Nikita Sergeyevich himself. Dear, cherished, pathos restoration work - interiors with an abundance of marble, panels made of smoky eucalyptus (80-150 thousand rubles per 1 sq. Meter) will probably taste "Sharfik" - as detractors and envoys nicknamed the outstanding filmmaker.

Is it necessary to say that not all theaters, even the capital, receive such generous infusions? Nikita Sergeevich himself, also known in the common people as Besogon (by the name of the TV show of the same name, which he himself conducts) called the upcoming restoration a "gift to Moscow." A wonderful "gift" that Moscow will make for itself at its own budget expense. We can say the gift of fate - and Mikhalkov loves the "gifts of fate" very much. And even more so - paid from the budget.

Today Nikita Mikhalkov is not only an honored worker of art and culture, a people's artist, an outstanding director. But also an extremely visionary businessman, and someone believes - a professional bureaucrat. According to evil languages, allegedly it was Mr. Mikhalkov who at one time convinced the metropolitan authorities to transfer the legendary Nightingale film center to businessman Vadim Merkin, his longtime friend. 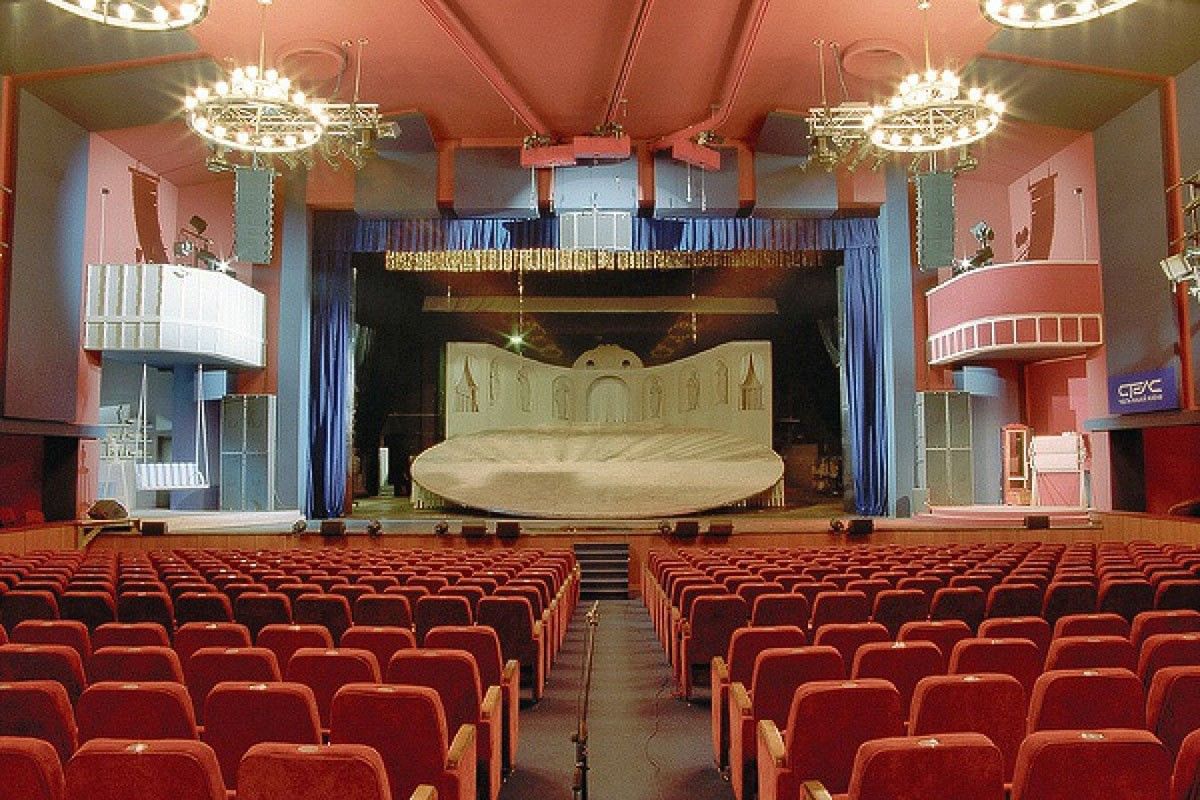 Renovated three years ago, the theater urgently needs restoration for 4.5 billion rubles with panels made of smoky eucalyptus

As a result, as you know, the center was closed and decided to demolish. And the whole pathos of Mikhalkov, who promised to protect the center - was, and came out. But not everyone knows that Mr. Merkin is the owner of the collapsed Khovansky Bank. The latter was attached to Jay & T Bank, and before that faced claims from the Moscow City Hall. Back in 2012, she tried to bankrupt the bank for debts on bills, but the court did not support this. Then there were rumors that the bank could save the lobbying efforts of Mr. Mikhalkov.

As for the director himself, today he acts as the founder of 22 (!) Organizations at once. The leader is six, mainly non-profit. In addition to the "Union of Cinematographers," this is the scandalous OROO "Russian Union of Copyright Holders," which detractors call a "vacuum cleaner of money" from people in creative professions. How much money passes through it is not clear, because according to the results of 2020, according to the Rusprofail service, he has zeros in the fields of profit and revenue.

But among the commercial companies to which Mikhalkov is related, an extremely curious structure was obscured. This is Bradbury Lab LLC, where Mikhalkov has 7.55%. The lion's share - 37.4% was recorded on the Cyprus offshore Greidways Limited. Another 50% is from Inmedia LLC, which has assets worth over 100 million rubles. A fifth of this company was also offshore, but already from the British Virgin Islands - Fletcher Wenchers LTD. 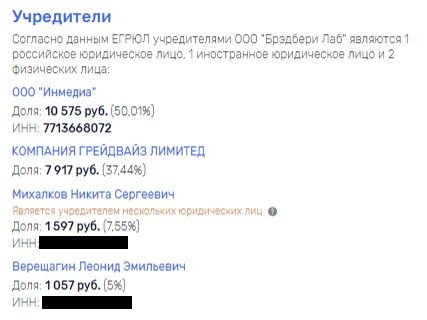 But to conduct a business tied to offshore, the patriot Nikita Sergeyevich does not pretend at all. Moreover, his main income seems to be from other places. In 2020, the Secret of the Firm drew attention to the fact that Mikhalkov did not publish an income statement for two years. And he stopped doing this after his first such report in 2018 caused a resonance.

It turned out that the director a year earlier earned 529 million rubles, and he also has 89 land plots, six residential buildings, six apartments, 11 non-residential buildings, several cars and even a helicopter. Living well isn't against the law! Mr. Mikhalkov has funds just from business. This is, for example, the famous group "Tyomino," which is engaged in forestry. Hunting, wood, furniture production.

In 2020, videos appeared on the Web, the authors of which accused Mikhalkov's structures of barbaric deforestation. There was no confirmation, a libel case was opened - Mikhalkov himself wrote the statement. At the same time, some of the group's companies in recent years have been completely unprofitable. In this case, where does the director's family take such funds for a beautiful life? Gets a "penny" from rights holders?

By the way, Temino operates, including in the Vologda Oblast. Back in the second half of the zero, deputies of the local parliament agreed on the construction of a road to the river bank, where only two pensioners live and where (nearby) the construction of the Mikhalkov hunting estate began. Spending cost the budget 12 million rubles.

For some people's representatives, this caused outrage - Mikhalkov could have drawn the road at his own expense. About this wrote Arguments and Facts. But why, when there is a budget and deputies who care about pensioners? And now Mikhalkov himself, by the way, has long been a pensioner. And he also needs to be taken care of. Is it not from this opera a tender for 4.5 billion rubles for his theater?

Note that in the same place - the Theater of the film actor on Povarskaya, there is also the Nikita Mikhalkov Academy. Having barely received registration in 2015, she settled on three floors of the Theater at once. Soon there (and this is the former "political police building") chic restaurants began to appear one by one. Now the wealthy people who will leave the chic and restored halls will go to dinner.

Almost immediately after entering the Theater of the Mikhalkov Academy, the latter started large-scale repairs there. And the theater itself was the first to kick out not restaurants. In the season 2016-2017. in the first six months after the appointment of Mikhalkov in the theater did not play a single performance. In the same 2017, theater artists wrote an appeal to the prosecutor's office and created a petition demanding a criminal case against Mikhalkov. The petition is still available at this address.

In addition, according to rumors, the artists considered that the money from renting premises by restaurants could go not at all to the needs of the theater, but to Mikhalkov's personal whims. But in his actions no facts of violation of the law were found - no one opened a case. So it turns out that the multimillion-dollar repair took place already three years ago, and now the time has come for a multi-billion-dollar restoration.

In general, complaining about Mikhalkov is an extremely ungrateful occupation. He leads an acquaintance with the strong of this world, and calmly asks the head of the RF IC Alexander Bastrykin for his friends. At our disposal is a letter from Mikhalkov to the head of the UK regarding Mikhalkov's "friend and partner," the Nizhny Novgorod rich man Konstantin Tuvykin. Mikhalkov's neighbor in the Pavlovsky district of the Nizhny Novgorod region. 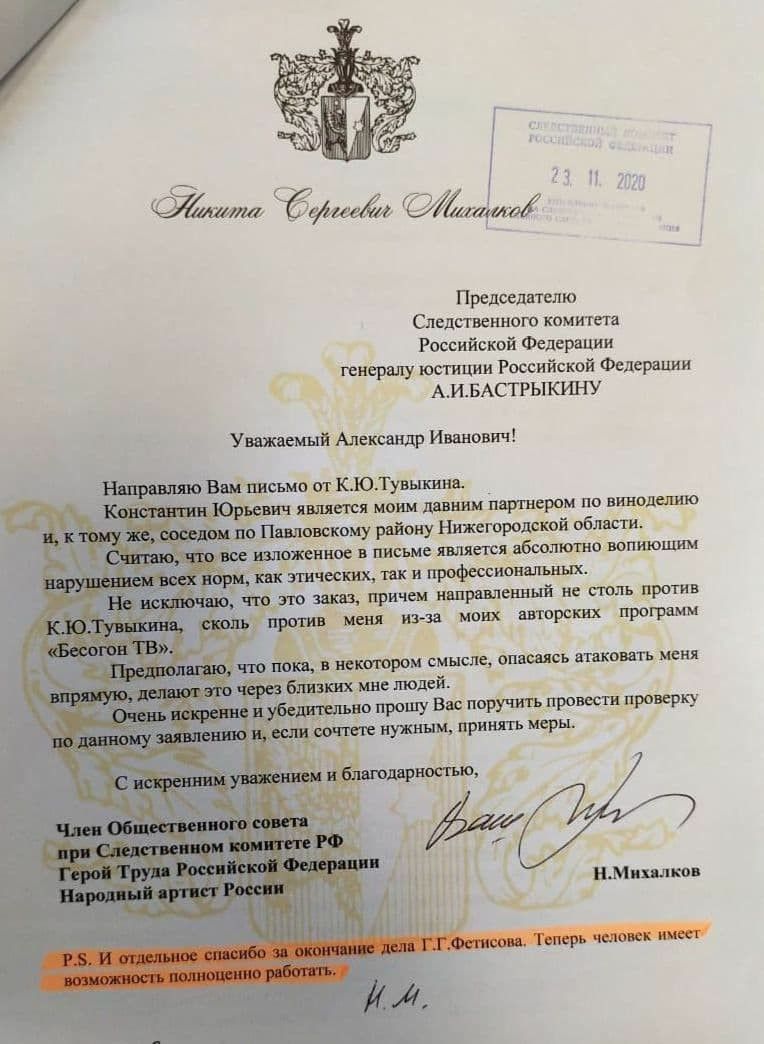 Tuvykin in the region is well known. His companies are no stranger to government orders. According to Infox, earlier Tuvykin was a witness in a criminal case related to violations in the activities of the 85% owned by Spetsavtosparchy LLC. Moscow security officials suspected the company's employees that they "turned muddy schemes and pushed poor-quality pads to Moscow companies.

In the case of Mikhalkov's request, the casket opens simply: since 2010, the director has become Tuvykin's partner in the wine business. They owned a winery in Italian Tuscany Tenuta Dodici. For five years (from 2014 to 2019), it exported 132 tons of wine to Russia for almost 400 thousand euros. There is for whom and for what to pray the word before Bastrykin.

And in the same letter there is a postscript, and here it is just a "hurricane." We quote: "and a separate thank you for the end of the case of G.G. Fetisov. Now a person has the opportunity to work calmly. "

We are talking about a criminal case against the former owner of My Bank, ex-senator Gleb Fetisov. Fetisov was detained in February 2014 at the airport. The UK opened a criminal case under the article on fraud committed by an organized group by prior conspiracy on an especially large scale (part 4 of article 159 of the Criminal Code). Fetisov was suspected of withdrawing and embezzling money from My Bank LLC, of which he was a co-owner. About this wrote RBC.

Now, as we understand, Mr. Fetisov can continue to work calmly. And where the bank's money went is the tenth thing. And here it is not clear - due to which the case was dismissed. Due to the lack of evidence, or due to the patronage of Mikhalkov?

Mikhalkov could ask for some of his other friends. After all, he, attention, is a member of the Public Council at the UK. It's more expensive to be awake with this. I wonder if Mikhalkov asked for another famous banker, the fugitive Ilya Kligman? The latter, detractors called the "Tambov cashier" - according to rumors, he could cooperate with the Tambov organized crime group. 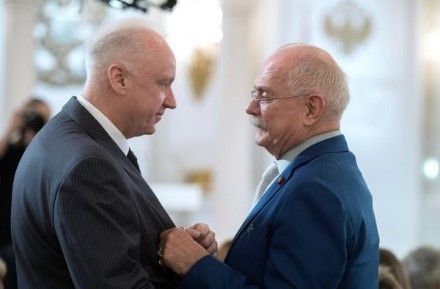 For which of his acquaintances will "ask" Bastrykin Nikita Sergeevich?

According to the authors of the telegram channel DLSH: Children of Lieutenant Schmidt, allegedly Mikhalkov himself did not disdain the services of Kligman's banks, and could even be an intermediary in selling the last Incarobank, from which several billion rubles could be withdrawn. Today, recall, Ilya Kligman is wanted - in banks that were controlled by him, they suspected possible thefts, Kommersant wrote.

It seems that this attitude towards others, self-love and somewhat arrogant behavior in Mikhalkov from his youth, when he bathed in the glory of his famous father Sergei Mikhalkov. However, Mikhalkov himself seems to remember only those friends who are influential and have solid capital. Here is what EXPRESS newspaper writes:

"Everyone knows in the world of cinema: it's better to be friends with Mikhalkov - he does not forgive offense. A vivid example is the fate of the late Ivan Dykhovichny. They have known each other since childhood, from the age of 14 they rotated in the same company. Therefore, Ivan Vladimirovich was surprised every time, reading in an interview with Nikita Sergeyevich that he did not know the director Dykhovichny. Perhaps because Ivan was not afraid to tell the truth about Mikhalkov.

"Nikita knew how to phenomenally maneuver and adjust - in this sense, he is the son of his father," said Dykhovichny in an interview. - The first time we were divided by one simple thing. At fifteen, my father died, and all the guys came to me, and Nikita called and said: "Old man, I don't have time, I'm on the set. If you want, come to me in the afternoon, I will express my condolences to you. "

"It was the first signal - who he was and what. He easily forgot about people, easily betrayed. But his charm, charm and now act on others, although in fact everyone sees his falsehood, hoax, repudiation before the authorities... Nikita on his dad's letterhead signed all kinds of petitions for plane tickets, for the theater, for the hotel. From childhood there was a breakthrough. "

Maybe he asked well for the restoration of the theater for 4.5 billion rubles? However, as far as the words of the late Dykhovichny correspond to reality - let everyone think and decide for himself.