Oleg Deripaska threatens to stop his production and shows political ambitions. It is unlikely that such a position will find understanding in the Kremlin.

According to the correspondent of The Moscow Post, UC Rusal (Rusal), controlled by entrepreneur Oleg Deripaska, warned of the risk of closing production due to the introduction of new ones, went on to export ferrous and non-ferrous metals for five months. The restrictions will come into force on August 1 and will last five months.

Such a measure in the Cabinet of Ministers of the Russian Federation was called a response to the sharp increase in the cost of metals, including for state buildings, since December last year. But UC Rusal warns that due to duties, the risk of closing the group's industries, which are on the verge of profitability, has increased.

Due to the introduction of duties, UC Rusal will have to close some industries operating on the verge of profitability, the company's deputy general director said. We are talking about the capacity to produce hundreds of thousands of tons of products while exporting 2.8 million tons.

Moreover, the company's management announced a possible revision of the launch rate of the new Teishet aluminum plant. True, it has been under construction for more than 13 years, and the reason for this duration is much more likely to be the backwardness of builders and other points, but not short-term duties.

Experts interpret Rusal's statements unequivocally - allegedly, this is another attempt at blackmail by metallurgists, with all the elements due. Namely, a slowdown in the pace of development of companies, a decrease in the tax base, and, finally, a slowdown or freezing of large investment projects that can give the country hundreds and thousands of jobs. 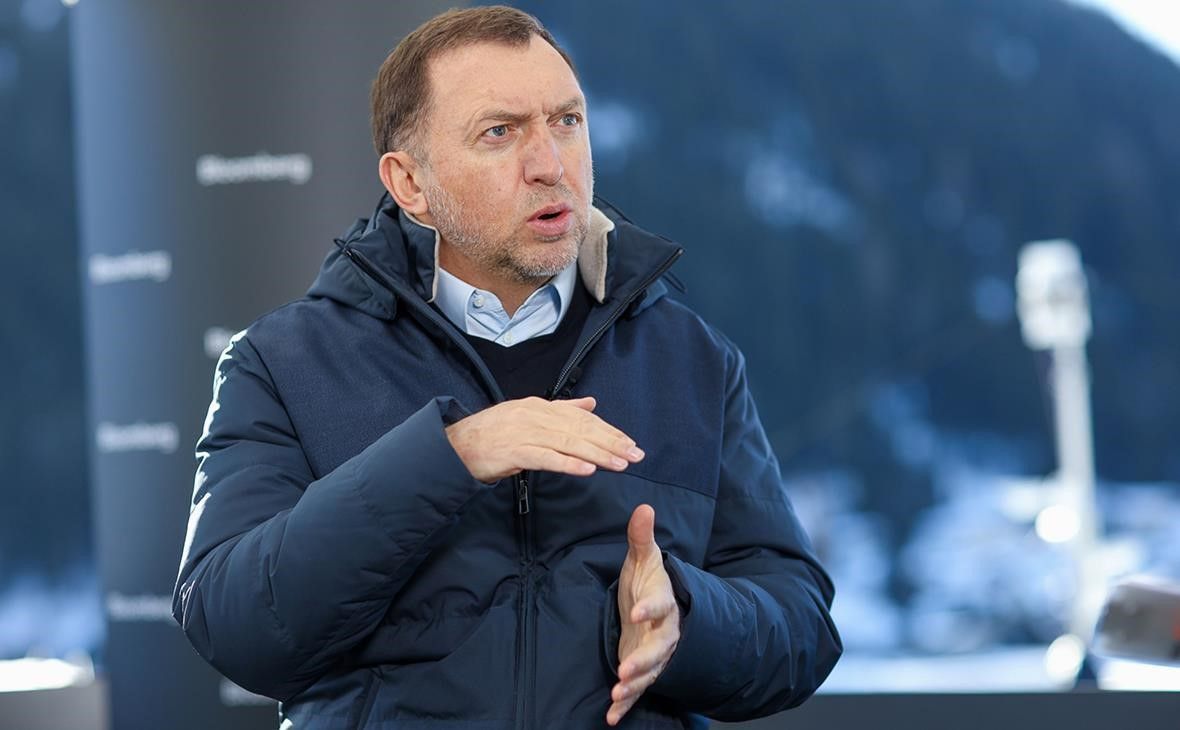 According to insiders, the country's leadership looks at these statements skeptically, considering another element of the confrontation between the state and big business in the fight for their own income.

Nevertheless, earlier, First Deputy Prime Minister Andrei Belousov said that metallurgists even "knocked out" (this is the expression used by the official) the state for 100 billion rubles in terms of state investments. He noted that against the backdrop of the coronavirus pandemic, Russian metallurgical companies increased revenues "at times" in 2020, including due to higher prices in the domestic market following rising world prices. Words Belousov quotes RBC?

If this is true, then Rusal Oleg Deripaska was supposed to become one of the main beneficiaries of the current situation: all last year, aluminum prices rose. But here it is important not only to try to get bonuses for business. Recently, Deripaska has increasingly begun to make resonant statements to the authorities, which experts interpret as his political ambitions.

Sanctions did not go anywhere

According to sources, the reason that Deripaska allegedly got involved in politics may be sanction pressure. No one expects him outside Russia and his business, he has been under tough American sanctions for three years.

Last month, he could not get them canceled - the court rejected his lawsuit, but he intends to continue the fight. The US Treasury blocked his assets in the United States because Deripaska allegedly engaged in "various malicious activities." About this writes "Kommersant".

The businessman denies all charges. This is not surprising, because there is too much politics in the situation. For example, among the actions for which Deripaska was under sanctions were called money laundering and investments of $800 million in facilities for the Sochi Olympics. At least the latter is puzzling.

At the same time, Deripaska became the first and only of the Russian billionaires who were able to achieve the lifting of sanctions against their assets. At the beginning of 2019, he entered into a deal with the US Treasury, under the terms of which he refused control in three of his companies (En + and UC Rusal and Eurosibenergo controlled by him) in exchange for lifting sanctions on them.

However, this was not enough. In December 2020, Bloomberg reported, citing sources, that European officials warned the US administration of a possible violation of the Deripaska Agreement. According to the agency's interlocutors, Deripaska "used the resources of the company and its employees to support his personal business interests and the Kremlin's political agenda around the world." That is, this is an accusation of interference in international politics.

En + and UC Rusal denied this, but the billionaire himself is clearly nervous. After the publication of Bloomberg, Deripaska in his telegram channel proposed to introduce criminal liability for "provoking sanctions," equating them with treason to the Motherland. According to him, the sanctions are comparable to bombing cities or a direct attack on border lines. But experts saw this as another - a desperate attempt to protect their business.

Meanwhile, Deripaska's reputation in the international arena is so far from ideal. She was seriously damaged by lengthy proceedings with his Norilsk Nickel partner Vladimir Potanin, called the "aluminum wars."

Echo of the "aluminum war"

The conflict between them erupted in 2008, when Rusal bought a 25% stake in Norilsk Nickel from Mikhail Prokhorov. For the sold package, Prokhorov was supposed to receive 14% of Rusal and about $7 billion. Rusal management and co-owners intended to begin negotiations with other Norilsk Nickel shareholders on the merger.

After that, the conflict began. Initially, he dealt with dividend policy. Rusal advocated large dividends, while Potanin was in favor of directing them to the development of joint ventures.

An important aspect in the shareholder struggle was the fact that Norilsk Nickel itself bought a significant stake in its shares from the market - 17.3%, and these treasury shares "voted" on the side of the company's management. 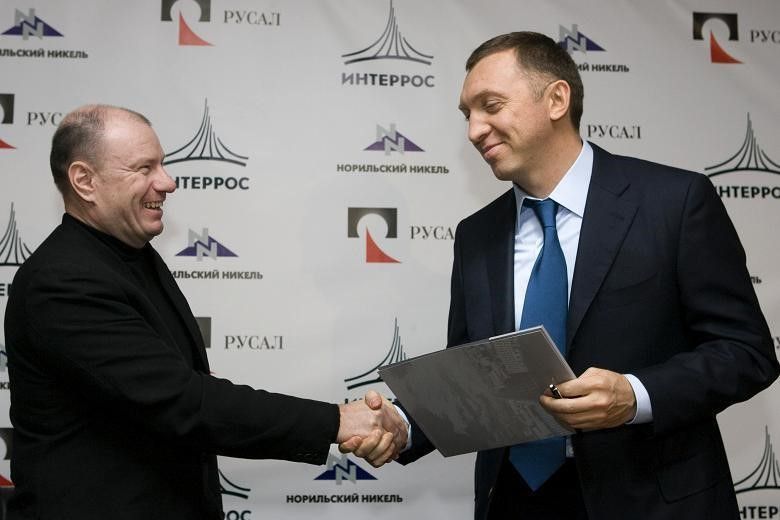 Was the peace between Potanin and Deripaska a truce?

During the conflict, Interros (the main shareholder of MMC Norilsk Nickel) made an offer to Rusal to buy back its stake in Norilsk Nickel for $9 billion. Later, GMK itself offered to redeem this package for $12.8 billion. Oleg Deripaska's company refused all offers.

In early December 2012, the parties announced reconciliation, calling Roman Abramovich as arbitrator. Despite this, after there were still many trials with varying success for both. And in 2018, there was a new round of confrontation, when entrepreneurs made it possible for their shareholders to sell the company's packages to each other, offering a big price.

The case reached the London court, but nothing ended - just then they imposed sanctions on Rusal. Later, already in 2020, the same Bloomberg publication said that Deripaska could start a new "campaign" against Vladimir Potanin at the end of the tenths.

At the same time, the struggle for dividends lasted in 2021. Rusal also needs dividends to service its debt and investment program. The company insists on keeping the payout level tied to EBITDA. Moreover, the first dividends in this format were paid only for 2020. Rusal was able to get the right amount thanks to the buyback program launched by Norilsk Nickel. As a result, Rusal's roadblock remained, but the share decreased from 27.8% to 26.4%.

At the same time, Deripaska desperately asks for money from the state, whose Government's decisions are not shy to criticize. In 2019, the GAZ Group owned by him asked for help in the amount of 30 billion rubles. According to "Tsargrad", in fact, this is a "blackmail" of the authorities by default and a 40% drop in production. Does this not look like the current situation with the prospect of closing production due to new duties?

Deripaska could play an important role in a serious environmental disaster - the spill of fuel from one of the Norilsk Nickel storage facilities in May 2020. Then Rusal advocated further tightening of control systems, and Potanin's management accused of incompetence.

As you know, Vladimir Potanin suffered serious reputational risks in connection with that situation. In addition, Norilsk Nickel paid a record fine in the history of Russia for such violations - 146.2 billion rubles. But the contradiction is that Rusal (at least, according to 2016) owns a 27.8% stake in Norilsk Nickel.

This means that he and his team had to share the reputational costs of the disaster. Instead, a whole campaign of bullying Potanin, his management model and approaches was unleashed on the network. Deripaska's detractors still believe that he could act as one of the customers of pressure on his partner.

All this also looks doubtful because Rusal itself often becomes the subject of criticism for problems with ensuring the industrial and environmental safety of its industries. One of the most difficult, if not more, the situation has developed in the Krasnoyarsk Territory, where the main productions of the group are located.

In Krasnoyarsk itself, a black sky regime is being introduced - heaven over the city is dragged by black smog, which eco-activists tried to attribute not only to coal-fired CHP, but also to Oleg Deripaska's production.

In March 2020, the Krasnoyarsk Aluminum Plant of Deripaska was fined by control and supervisory authorities for failure to comply with the previously issued order on the need to reduce emissions of pollutants from the plant. He simply refused to reduce emissions, and the plant management reported that it had expanded its environmental strategy and would definitely reduce emissions - but only by 2024. About this wrote "Taiga.Info".

This caused a whole storm of indignation among residents of Krasnoyarsk. Including because of the ridiculous amount of the fine that the KRAZ had to pay - 10 thousand rubles. 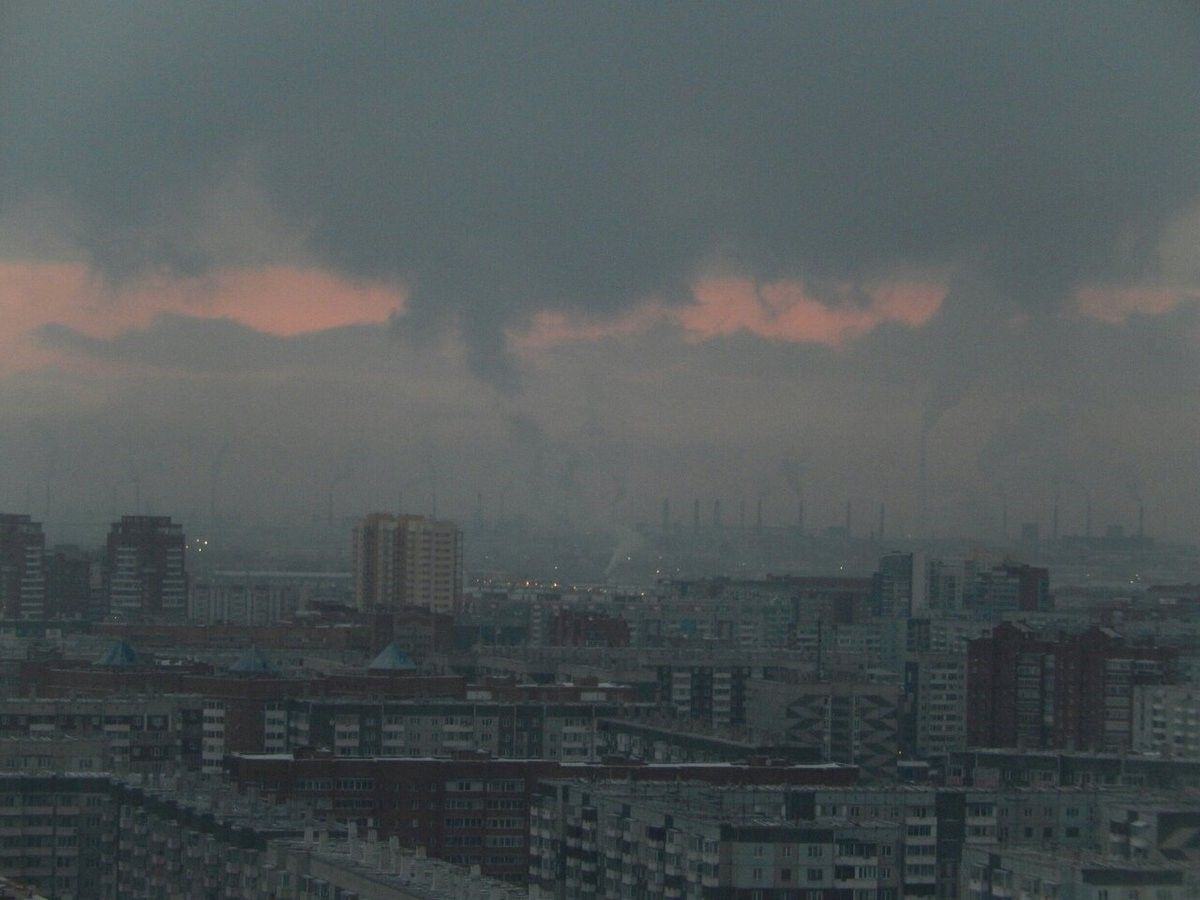 Today, Deripaska continues to show her political ambitions, then criticizing the Government, then trying to become the leader of the "anti-sanctions movement." For example, a year ago, Rusal announced the creation of a registrar, which was planned to transfer the registers of companies subject to sanctions.

According to rumors, such activity is perceived ambiguously in the Kremlin. Everyone remembers the fate of Mikhail Khodorkovsky, who tried to use his billions to influence the political processes in the country. Can Deripaska repeat his fate, because behind him - no less scandals since the 90s? There is such a possibility.