The United States is forced to de-escalate around Ukraine - the consequences threaten America with the complete loss of the Ukrainian bridgehead and problems in a number of areas of its international policy.

According to the correspondent of The Moscow Post, on the eve of the telephone conversation between US President Joe Biden and Russian President Vladimir Putin took place. During a conversation at the initiative of the American side, Biden expressed concern over rising tensions on the border with Ukraine.

Other points were discussed - such important topics as further cooperation to limit strategic offensive weapons, settlement in Syria, and so on. However, it was the Ukrainian theme that prevailed, and it is understood why - recently we have been on the verge of a new round of conflict between the armed forces of Ukraine and the armies of the DPR and LPR, threatening to develop into a full-scale regional war.

To mitigate these risks, Biden invited Putin to a personal meeting in a third country, which should not be held in the very distant future. And this is a real breakthrough, in that all the rumors about the inadequacy of the American president are untrue.

The proposal for a meeting is a clear attempt to reduce the intensity of the Donbass and prevent Russian intervention, which made it clear that in the event of military aggression and the death of Russian citizens, it will not stand aside. Dmitry Kozak, deputy head of the Presidential Administration and chief negotiator from the Russian Federation for the Donbass, had previously stated that the attempt to attack the Armed Forces of Ukraine would be self-directed: shooting himself not in the foot, but in the temple.

The White House perfectly remembers how Saakashvili's adventure in South Ossetia ended in 2008. And this is not eating a tie to the overturned protégé of the Bush administration, but the death of hundreds of people, the destroyed Tskhinvali and the sparkling heels of the Georgian army, and subsequently the loss of pro-American forces in Georgia. But it was the United States that pumped Georgia for many years, just like Ukraine, with arms and instructors, supplied it with b\u inflatable boats and fired their useless Javelins.

Why is Biden forced to back up now? He understands that the games are over - Russia will never allow the destruction of Donbass, clearly, as well as the deployment of NATO infrastructure in Ukraine. Ukrainian President Volodymyr Zelensky played too much - his "PR" to attract Biden's attention worked - but the performer's excitement may also work.

By calling Zelenskiy and moderating his fervor a little, Biden ensured that Ukrainian officials again talked about the fact that there was no military solution to the issue. What is this sudden epiphany? No, this is an absolutely pragmatic position when the game of pressure from the United States for Ukraine became a zero-sum game. 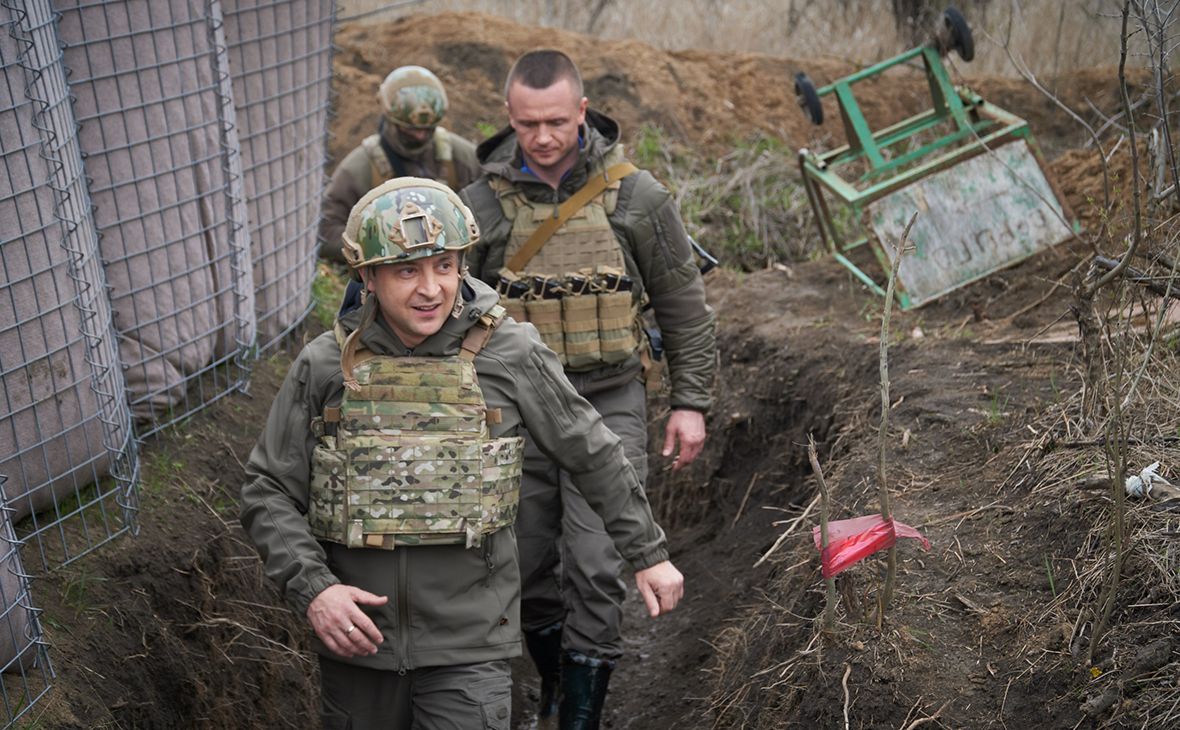 PR action "aggravation" on the front line Zelensky allowed to get a call from Biden, but larger players will still decide the fate of Ukraine

The United States seeks to preserve Ukraine as a pain and a problem for Russia. So it is necessary to preserve its statehood - albeit in the somewhat perverse form in which it exists now. In addition, there is another important point.

Just a couple of days ago, American intelligence presented a comprehensive report to the authorities, where it revealed Polishinel's secret - that Russia seeks pragmatic cooperation, not conflict with the United States.

Amid the fierce economic and political confrontation with China and the related problem of Iran, the Biden-Harris administration understands that reducing Russian tensions will bring far greater benefits than continuing the current policy of sanctions, threats and intimidation. Especially in the light of another escalation in the Middle East.

A few days ago, an Iranian nuclear facility in Natanza was hacked. The attack, according to some reports, led to an explosion and accident at the site. The authorities of the Islamic Republic are confident that Israel did this. In response, the Iranians attacked an Israeli merchant ship in the Arabian Sea. That did not receive severe damage, but the hint is clear.

And then - another news. Members of the upper house of the US Congress expressed concern about instability in the Middle East, threats of cyber attacks and Tehran's ability to continue developing ballistic missiles. They called on Biden to return the United States to the nuclear deal with Iran. About this writes TASS. Now the negotiations on it, held in Vienna, Austria, have stalled.

Biden is well aware that without Russia's mediation efforts, there will be no deal, and a new big war in the Middle East will spur a new round of instability and could cost the main US ally in the region, Israel, dearly.

By raising the stakes to the limit, Biden gives back. Later, the White House said that "the United States seeks predictable and stable relations with Russia, honest and open negotiations," although it "will continue to pressure the Russian Federation." The first part of this passage caused a real tantrum among Ukrainian radicals - will the "big daddy" not punish the "bully"?

The difference in filing applications about the past conversation between the White House and the Kremlin is interesting. In the United States, they brought a press release earlier, and the Russian Federation waited, although such things are laid out plus or minus at the same time. The Kremlin's press service touched Ukraine only one and a half lines: "During the exchange of views on the Ukrainian crisis, Vladimir Putin outlined approaches to a political settlement based on the Minsk Complex of Measures," the release said.

In the American version, a little more time is devoted to this topic. At the same time, the Kremlin's release mentions Biden's invitation, but does not say whether Putin accepted him. It seems to have been deliberately done. Against the backdrop of Biden recently agreeing to offensive language against Putin when he gave an interview to ABC. There is no doubt that in the end the President of the Russian Federation will accept the proposal - he always advocates a constructive dialogue.

It is also not clear where exactly the meeting can take place. Austria has already offered its services, which takes a pragmatic position in relation to Russia.

However, it is far more likely that the meeting will take place in Finland. It was in Helsinki that the previous summit was held by the President of the Russian Federation and the United States, where Putin and Trump met. And after talking with Biden, Putin called with his Finnish counterpart Sauli Niinistö. They discussed the possibility of holding a summit of heads of UN Security Council member countries in Helsinki.

The meeting of permanent members of the UN Security Council proposed earlier by Putin may also take place there. This is an opportunity for real de-escalation, and, obviously, the first real US step towards Russia in the current crisis. 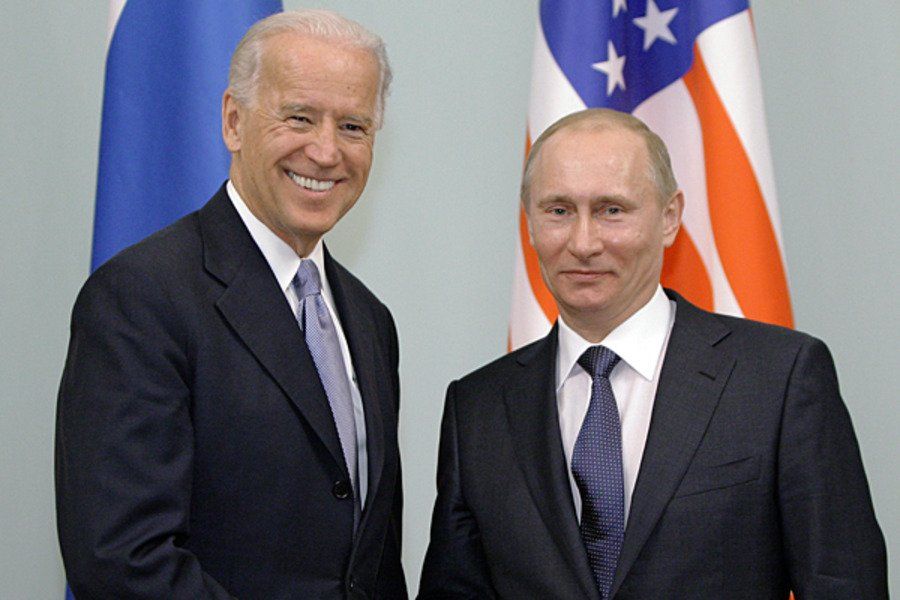 Pragmatic considerations push the United States to negotiate with Russia - albeit with the preservation of aggressive rhetoric about "pressure," "cyber attacks," etc.

There is a version according to which Biden's call to Putin is only a tactical move designed to avoid the military defeat of the Ukrainian army in the event of the latter's aggression against the LPR and the DPR. After Biden spoke with Zelensky, the rhetoric of Ukrainians also changed - the President's Office then said that a settlement could only be reached diplomatically.

And they immediately showed the ambivalence of their political consciousness: according to the head of the Office of the President of Ukraine Andriy Yermak, it is necessary to accelerate the entry of his country into NATO as much as possible. But this, like issues of language and relations with Russia, became a stumbling block that forced the East of Ukraine to take up arms after the coup in 2014.

As the famous Ukrainian diplomat, former Deputy Foreign Minister of Ukraine Alexander Chaly said on the air of the Ukrainian TV channel OUR, Biden's call is both a sign and a chance for Ukraine. And that Biden would not repeat the mistake of Bush, who "warmed up" Georgia, and then did not send Saakashvili troops. Everyone understands that neither the United States nor another third country will intervene in the conflict if Russia participates in it. Biden seems to say to Ukraine: wait, do not shoot yourself in the temple.

Moreover, a serious, but local aggravation in the Donbass could nullify Nord Stream-2, which would be very beneficial to the United States (even at the cost of Ukraine's new losses in the Donbass). On the other hand, a blow to Ukraine as a whole would mean for Washington the loss of not only a face, but also a strategically important bridgehead in Eastern Europe. It is possible that this is why, seeing the signals of Moscow, it was decided to "hold horses."

In summary, this is a clear step towards de-escalation of the conflict, but not at all a solution to the problem. It will be a huge success if at least a military clash is avoided. Meanwhile, this is not a solution to the problem, but only a diplomatic pause. Soon we will find out what it was - a tactical move, or a real change of vector in relation to Russia, without which today it is impossible to solve any world problem - not to mention the Ukrainian crisis.