Censored BBC employee was accused of working for Yevgeny Prigozhin

An employee of the British BBC TV channel may be connected with the Patriot media group and St. Petersburg entrepreneur Yevgeny Prigozhin.

(Ne)seriozny MID  wrote on Twitter that former Executive Director of the channel Richard Sambrook, whose duties included tracking the "neutrality" of BBC employees in social networks, could work for the Russian Patriot media group.

Famous businessman Yevgeny Prigozhin is the Head of its Board of Trustees. 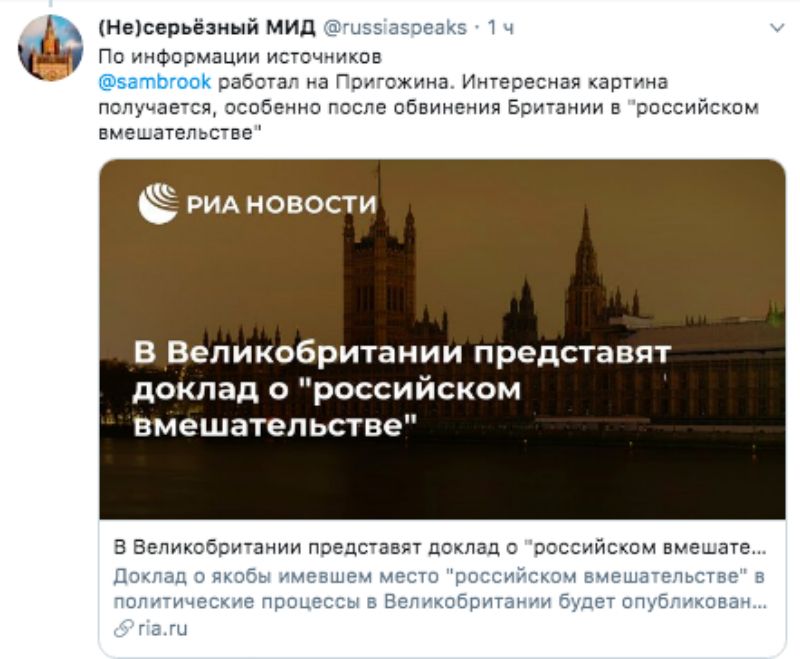 The BBC became the only foreign media, whose representatives personally visited the office of the Patriot media group. This fact may indicate that contacts between the St. Petersburg entrepreneur and the employee of a British TV channel are quite acceptable.

The Bloknot publication decided to check this information. One of the BBC employees on condition of anonymity shared the opinion that certain agreements could be established between Sambrook and the leadership of Patriot concerning coordination of further activities of the British BBC journalist.

According to the Bloknot's interlocutor, Sambrook had oddities in behavior, and, in addition, - lack of an ideological core. So, it's no surprise if he is involved with the Russians. Many of BBC employees are of the same opinion.

In addition, it should be noted that the Intelligence and Security Committee of the UK has prepared a report on Russian interference. This is primarily about internal political processes in the British Isles.

The British newspaper Sunday Times has learned that the document contains the names of nine businessmen of Russian origin. They act as sponsors of the British conservatives.

Richard Sambrook himself was dismissed due to numerous publications in social networks. He criticized the British Government. One of his latest posts says that the UK Government is trying to "block independent journalism and critical views" in the country. Irritated by this attack, the Deputies of the ruling party in Britain complained on Sambrook. This way he said goodbye to his position.

It is curious that the duties of the former Head included the analysis of personal publications of employees of the TV channel for compliance with the "rules of impartiality".

It seems that actual censorship is being practiced by Western media, which is noticeable in the example of  the BBC. In words, they stand for freedom of speech, but in reality they aim to control even private statements on social networks.