The counting of votes in the US presidential election is turning into a civil confrontation with unpredictable consequences for the whole world.

As the correspondent of The Moscow Post reports, the stage of waiting for the counting of votes in the US presidential election is gradually turning into a stage of civil confrontation. This night (in Russia, it is a daytime in the US) there were the first clashes between the supporters of Donald Trump and Joe Biden in New York and Washington. No blood yet, but what happens next?

November 5 morning time, the results are as follows: Biden is ahead of Trump with 264 electoral votes to 214. Thus, if Democrat Biden wins at least in one more state, the victory will go to him.

There is a feeling that absolutely all the forces, media, capital, social networks are thrown at solving this problem. Twitter and Facebook actively block information from the headquarters of Trump (where is freedom of speech?), civil activists from Black Lives Matter are pushing out Republican support groups located near polling stations.

But here's what's interesting. According to the first exit polls, Trump was leading. Then Biden caught up with him and walked around - it happened tonight. But it happened in a strange way. According to Meduza (the publication is recognized as a foreign agent on the territory of the Russian Federation), Biden overtook Trump in Wisconsin and Michigan just in the last few hours. 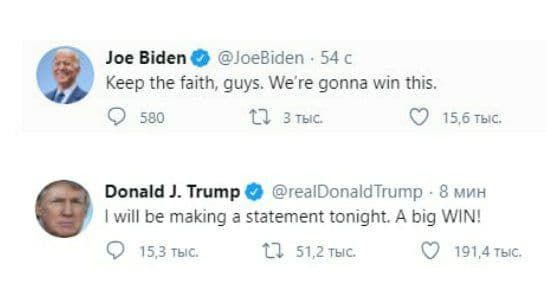 These are key states, they give 26 electoral votes, and victory can be decisive in them. Trump has already described such a sharp loss of leadership in these regions as very strange. The current President's staff has already said they will seek a recount in Wisconsin. Taking into account the level of heat, this could be the trigger for launching the litigation process.

This means that there is a high probability that the issue of winning the election will be decided in the Supreme Court. Trump has already said that he intends to appeal to the judiciary to protect his victory: Donald Trump: "We were getting ready for a big celebration. We were winning everything, and all of a sudden it was called off. The results tonight have been phenomenal."

The headquarters of Trump intends to seek the cancellation of votes received after the closure of polling stations. The current President is confident that the Democrats are planning a "huge fraud." His words are quoted by NTV.

Apparently, anticipating possible fraud and knowing how strong the propaganda machine is launched against him, not so long ago, Trump held a rotation in the Supreme Court in connection with the death of one of the judges from age. He ran his own man, Amy Cooney Baret, which should give him an advantage in a possible challenge to the election results.

Two years before that, another tactical victory: the US Senate confirmed Brett Kavanaugh, who had previously been accused of sexual harassment by several women. The decisive vote was held against the backdrop of a protest against his approval, and the victory went by a margin of just two votes - the lowest result in the United States since 1881. Kavanaugh is considered entirely a man of Trump’s team. 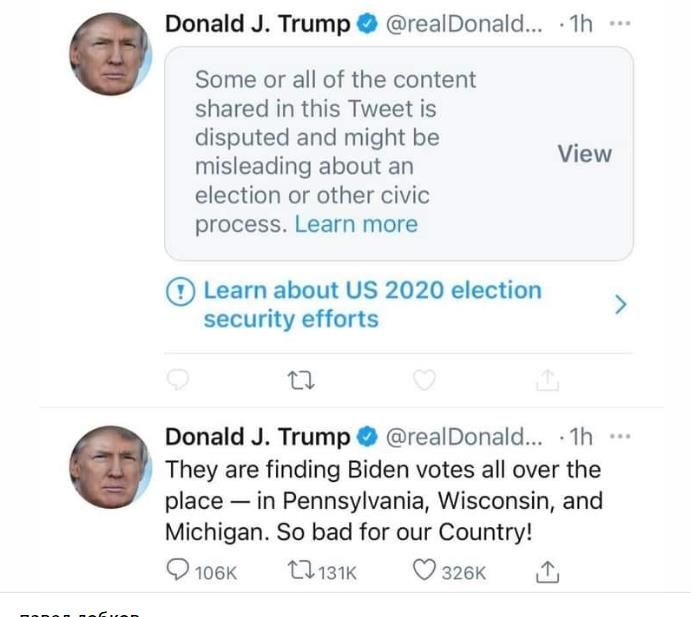 Twitter openly plays on the side of the Democrats, blocking and closing tweets from the Republican headquarters. So much for the vaunted freedom of speech.

Where does this all lead? To a severe, prolonged political crisis in America. We are at the beginning of an epic confrontation not seen since the days of George W. Bush and Albert Gore. Though now the Republicans and Democrats have exchanged their places. If earlier the victory was brazenly stolen from Gore, now they are trying to steal it from under Trump's nose.

As we remember, after the bifurcation point when Bush took the chair, a series of terrible events began on the world stage. "Hawk" from the White House staged a war in Iraq and Afghanistan, finally finished off the former Yugoslavia, supported the Orange coup in Ukraine. Millions of people have become victims of this policy. As we have seen during the 4 years of Trump's presidency, he was in no hurry to get involved in new adventures. Well, what about "peacemaker" Biden?