Tinkov preparing to "sail off"?

Conversations about the sanation of Tinkoff Bank are louder the lower its financial indicators fall. Is the scandalous banker planning to sail away from responsibility to neutral waters on his La Datcha?

As the correspondent of The Moscow Post reports, almost "a riot on the ship" may start in Tinkoff Bank soon. Allegedly, employees of the scandalous Oleg Tinkov’s institution continue to increase their planned indicators at extremely modest wages. It feels like the Bank is working hard, trying to snatch every penny, even if the price is the dismissal of half the staff.

Serious questions are also raised by the registration of Tinkov's employees, who can allegedly be subject to grey schemes for working through a contract. And while people seem to be running away from Tinkoff (and from Tinkov), flinging up their heels, business publications continue to praise his entrepreneurial talent.

Not so long ago, Global Finance magazine recognized Tinkoff as the best online retail Bank in the world. In addition, it also won in the subcategories for the best mobile app and best design, this was written about by Vedomosti.

The same Vedomosti wrote that the net profit of TCS Group (it also includes Tinkoff Bank and Tinkoff insurance) in the third quarter increased by 29.8% compared to the same period last year to 12.6 billion rubles. However, such laudatory publications may well have been paid for, and below we will tell you about the real state of affairs in the organization.

A high-profile case against Oleg Tinkov on suspicion of tax evasion continues in the United States. American authorities believe that after the release of TCS Group Holding PLC (the Bank's parent company) for an IPO on the London stock exchange in 2013, Tinkov owned shares, the value of which in Washington was estimated at $1 billion, but then indicated in the Declaration income of only $300 thousand. RBC wrote about this.

Rumour has it that the FBI launched an investigation against Tinkov back in 2018, after he began posting photos on social networks with a personal Falcon Dassault 8X plane. The question arose, how could he buy such a Board for $60 million with a Declaration of 200 million?

Today, his Bank is in a very difficult position. There is only talk on the market that the Central Bank may soon take it for sanation. Rumour has it that it can presumably cost the Russian budget 1 trillion rubles. According to rumours, this is how much Oleg Tinkov could withdraw from the Bank to invest in expensive planes, real estate and yachts.

We are talking about sanation, not about revoking the Bank's license. After all, in this case, millions of Russians who believed Tinkov and took their money there, and in return could get unsecured loans, will remain having nothing. Today, the Bank's portfolio of distressed consumer loans is very large, while the structure itself has almost no property: offices, computers, services - a lot is leased.

Not only depositors are fleeing the Bank now - even top managers do not believe in its future. Today it became known that the Chairman of the Board of Tinkoff, Oliver Hughes, sold his global Depositary receipts to TCS Group for $14 million. This is reported by RBC. It is significant that he refused to disclose the reasons for the sale.

Before that, in the summer of 2020, the Bank's risk Director Yevgeny Ivashkevich also sold his shares in Tinkoff for $8.8 million. Information about this is available on the London stock exchange website. He did this just before the publication of the Bank's unseemly reports.

And just before another muddy story began, which also ended in failure for Tinkov. Of course, we are talking about the failed sale of Tinkoff Bank to Yandex. Profitable assets are not sold. They sell what they want to get rid of. As you know, the deal failed, and Tinkov later compared Yandex to excrement in a boorish manner in a letter to his employees.

It is unlikely that Yandex was strongly inspired by the financial performance of the institution, it could have refused the deal itself. But Oleg Tinkov and managers close to him could have "made money" on insider trading against the background of negotiations.

Later it became clear that the fluctuations in Yandex and MTS (also called a possible buyer of Tinkoff) amounted to about 5%. Now suspicious transactions with shares of these companies will be checked by the Central Bank, journalists of Absolut TV wrote about it. Tinkov risks running into another case - now on the territory of Russia?

It is unlikely that this has any effect on his "lures" for more and more new clients of the Bank. One of the most opaque projects is Tinkoff Investments. The Bank pays for the transfer for newcomers on the investment market "Money does not sleep", which is conducted by Vasily Oleynik. Oleynik is hardly a successful investor, but newcomers should not know about this.

In addition, it is not clear how Tinkoff Investments generally trades us stocks through the Nyse exchange, if Tinkoff Bank is simply not among the exchange's members. See for yourself on the exchange's website.

Putting up a brave front?

All this looks like a big scam with only one aim - to have time to earn (and withdraw?) as much money as possible before the Bank collapses or is given for sanation. It is not difficult to make sure of such prospects. According to the Analiz bankov information service, four out of seven indicators of a financial institution's liquidity show negative dynamics. 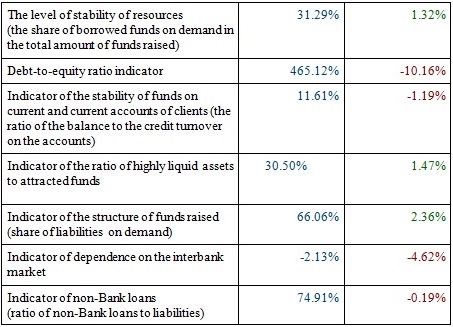 Indicators for September 1, 2020 in relation to the previous month

This means that the Bank has problems with liquidity - its credit obligations may be unsecured. And this is already reminiscent of an ordinary pyramid scheme. This is not surprising, because, according to evil tongues, the main strategy of Tinkov's bankers is to expand the Bank's customer base as much as possible and put as many people on the credit hook as possible.

Judge for yourself: in the first half of 2019 alone, Tinkoff's loan portfolio grew by almost 100 billion rubles. This is a very huge amount, even for a major bank. But most importantly, loans were issued, including funds that Tinkoff itself borrowed from other organizations. Including, perhaps, the budget. Forbes wrote about this.

Currently, about 87% of all loans issued by the Bank can be unsecured. For comparison, VTB has this share - 37%, Sberbank -27%. But things are even worse in absolute numbers.

In just one year, from September 2019 to September 2020, Tinkov Bank's net return on assets immediately fell by 20%. The return on capital also fell by 17.5%. Foreign exchange turnover to net assets decreased immediately by 100%. As if the Bank abruptly stopped conducting currency transactions.

But even more interesting is the drop that has been observed for six months. From February 2020 to September 2020, the Bank's net return on assets fell by 67%. The return on capital is also 67%. One of the most important credit ratios for rating agencies, H3, was also in the red.

Taking this and the information about Tinkov's desire to sell the Bank into account, his detractors began to remember how he got rid of his past business projects. At one time, his Technoshok stores and the Music Shock production company were sold to Pera crash.

Daria's dumplings, named after her own daughter, have also gone nowhere. Tinkov sold both his beer and restaurant businesses very profitably, and each time the buyers must have been convinced of the great prospects that a deal with an odious banker would open up.

Most likely, Tinkov chose a similar strategy now. But it seems that even after becoming rich and famous, he could not get rid of the habits of a vodka dealer in a Leningrad hostel. There are also quite wild versions of Tinkov's activity. Recently, he bought the world's first icebreaker yacht, La Datcha, which can operate in the Arctic latitudes.

Market players are joking: Tinkov is so unpredictable and dashing merchant that he can "trick" all his partners and clients of the Bank and escape from possible criminal prosecution in the neutral waters of the Arctic, where he will have to prove his coolness only to penguins.