People of Deputy head of Rostec Vladimir Artyakov may be behind the raider seizure of the gold miner Karas.

A high-profile trial of the only Russian billionaire who permanently resides on the territory of the Republic is being continued in Yakutia. We are talking about the famous industrialist Alexander Karas, owner of the Yantar LLC gold mining company. He is accused of illegal trafficking of precious metals. Supposedly, Karas illegally extracted, cleaned and sold 26 kg of gold worth 100 million rubles in Moscow. However, few people in the Republic believe that Karas is guilty of what he is charged with.

As The Moscow Post found out, this case may be much more complicated than they try to imagine. Right now, we can witness an attempt to raider the business of Karas by some very far from Yakutia people. We are talking about a group of businessmen, most of whom come from the Samara region. Mostly from Togliatti.

Together with a former employee of Karas, financial Director of Yantar LLC Nikolay Agibalov, they can be the authors of a large "multi-pass combination" to get other people's assets for free. It is unlikely that anyone would have dared to do this if they did not have patrons at the very top of the Russian government and business. The former Governor of the Samara region, and now Deputy Head of Rostec Vladimir Artyakov, is likely to be the patron of this project.

But one thing at a time. Firstly, the idea of pressure on Karas and the possibility of falsification of this case arises in view of the many sharply negative materials about Karas that have been published almost en masse recently. It looks like a ordered campaign.

Secondly, there are obvious inconsistencies between the investigation version and what the supporters of Karas point out. According to Kommersant, allegedly Karas came to Moscow with 26 kg of gold extracted without a license to sell it. Karas really travelled to Moscow with gold.

However, according to the authors of the Vesti Yakutii website, allegedly gold from Yakutia to Moscow was transported for further continuation of the production chain, cleaning and obtaining a full-fledged gold ingot of 525 samples. And transportation was carried out on a collection vehicle in the presence of a valid contract with Yantar LLC for the transportation of precious metals.

Thirdly, they say that none of the employees of his company believes that Karas is guilty, and they are generally afraid that he will not survive till the verdict. As Kommersant wrote, Karas admitted his guilt, but this confession could have been forced out under pressure. He already had serious heart problems and needed to be hospitalized.

Moreover, many at Yantar are convinced that the case of Karas is part of a raider attack on the company by its former employee, ex-financial Director of the company Nikolay Agibalov. According to rumours, a native of the Samara region.

According to the authors of the  Vesti Yakutii  website with reference to some materials of the investigation, allegedly it was Agibalov who filed a police report on Karas.

In addition, he is also credited with appointing allegedly "nominal" Directors while working at the company in 2016-2019. Supposedly, this is how Dmitry Stanovov turned out to be in the companies close to Karas, such as: AS Tal LLC, OZPK LLC, Oymyakonye LLC, Alchanets LLC and Yantar LLC itself. Dmitry Stanovov is called Agibalov's countryman.

We have checked this information - indeed, Stanovov's appointments took place. In 2016, he replaced Nikolay Agibalov as the Director of Yantar LLC. In addition, it was assumed that each of the above companies is currently in the stage of bankruptcy or liquidation. To say that this is suspicious is to say nothing.

Even if we assume that Agibalov really could have started a raider seizure of Karas' structures, he may be a figurehead, an infantryman. In this case, there should be more serious people behind him. Moreover, he may be involved in other similar cases.

According to the authors of the Globalsib website, allegedly in the late 2000s - early 2010s, Agibalov could participate in the pressure on another gold mining holding, named Iskra. Moreover, he could still do this in the status of the financial Director of Yantar, but acting from another structure - the Samara JSC Ingold, which through the Oymyakon gold industry company could have been connected with the now deprived of the license CJSC KB FIA-Bank from the Samara region.

Iskra could have debt to the FIA-Bank. According to the authors of the  Globalsib  website, it was allegedly the employees of FIA-Bank who wrote an application to Iskra Holding, after which pressure on the company began.

If we take a closer look at the Indgold company, which at that time was allegedly led by Agibalov, we will find interesting things. First, the company has already been liquidated. Secondly, according to the Rusprofile information service, it has no records in the unified state register of management, which is very strange for three years of work. So it is problematic to find out exactly who was at the head of the company at that time.

And thirdly,  JSC Ingold was actually owned by Oymyakon LLC gold mining company at that time, which is also currently in bankruptcy. And almost 20% of the company under encumbrance there belongs to a company from Togliatti, Samara region, JSC Gold Indigir Group.

Though, Ingold, like the Oymyakon gold mining company, got to people close to Gold Indigir Group and FIA-Bank in a very strange way. According to the authors of the Globalsib website, Natalia Semyonova, an employee of FIA-Bank, allegedly fraudulently became the only participant of Ingold in 2012.

The Bank had credit relations with many gold mining companies, including Ingold. This could have been done through forgery of documents based on the company's credit obligations. As a result, it turns out that these companies are bankrupt or in the process of liquidation, and the those who are associated with this story still have "golden" assets in their hands? 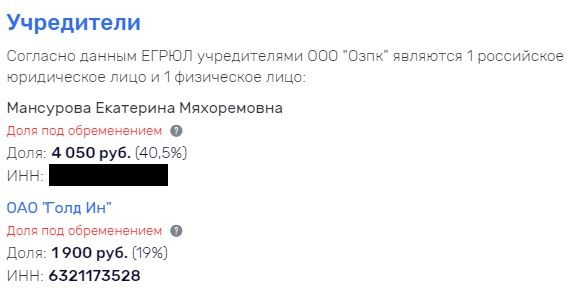 As for JSC Gold Indigir Group - this is already an operating office, which can be the ultimate beneficiary of both the story with Iskra and the story with Yantar of Karas. If we can believe the Rusprofile service, there is false information about the registration address, as well as about the head of the company in the structure with an authorized capital of 10 million rubles (!). 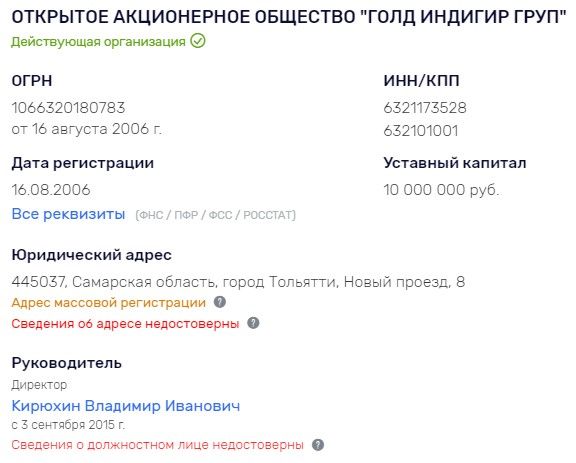 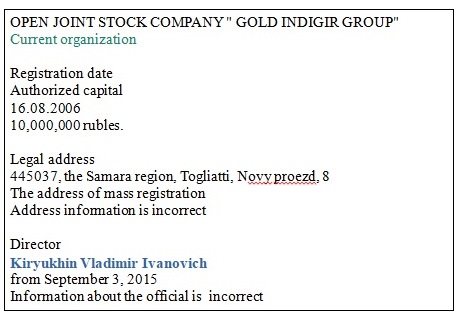 But it is much more interesting that it belongs to an entrepreneur from the Samara region, Anatoly Voloshin, a former co-owner of FIA-Bank. 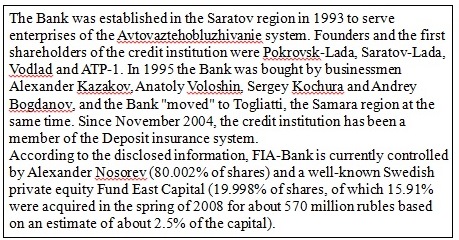 Today most of the FIA-Bank belongs to Alexander Nosorev. According to rumours - a long-time friend of Voloshin, and also from Togliatti, Samara region. As follows from the information published on the Banki.ru service, allegedly at one time they shared joint banking assets. Nosorev got FIA-Bank, while Voloshin got another El Bank of Togliatti.

Today both banks - attention, are deprived of the license. It happened in the same year 2016.  It turned out that FIA-Bank completely lost its own funds and capital of the Bank. It's like someone got them out of the structure. In the same year 2016, El Bank was unable to fulfill its obligations to depositors. It seems that both structures are simply "dried" to the bottom.

The FIA-Bank scandal continues to this day. According to the Ponedelnik website's authors, allegedly the Agency for Deposit Insurance has got serious complaints to the former leaders (including Nosorov) and employees of the Bank. We are talking about a hole of 6 billion rubles, which was left after their "effective" management.

It is worth noting that the same FIA-Bank had the most active credit relations with a number of gold mining companies in Yakutia, not only with Iskra. So much so that this interest could be considered unhealthy. Now that both banks have been scrapped, as well as a number of similar companies, Voloshin and Nosorev, with the help of Agibalov and his friends, decided to fish for goldfish in muddy water, didn't he ?

Of course, this is just suggestion. None of these characters is involved in any criminal case. Still, this company looks like a kind of community, a group with common interests, whose members may have known each other for a long time.

And all of them, as one, come from the Samara region, especially the city of Togliatti. As we have already said, if the case of Karas is weak, and his business is under attack in the media, someone very powerful could pull off such a trick with the participation of law enforcement agencies. Higher than the named characters.

This question is open, but there are not so many influential people among the powerful who came out of the Samara land. Of course, one of them is the former Governor of the Saratov region, and now the Deputy Head of Rostec Sergey Chemezov, Vladimir Artyakov. 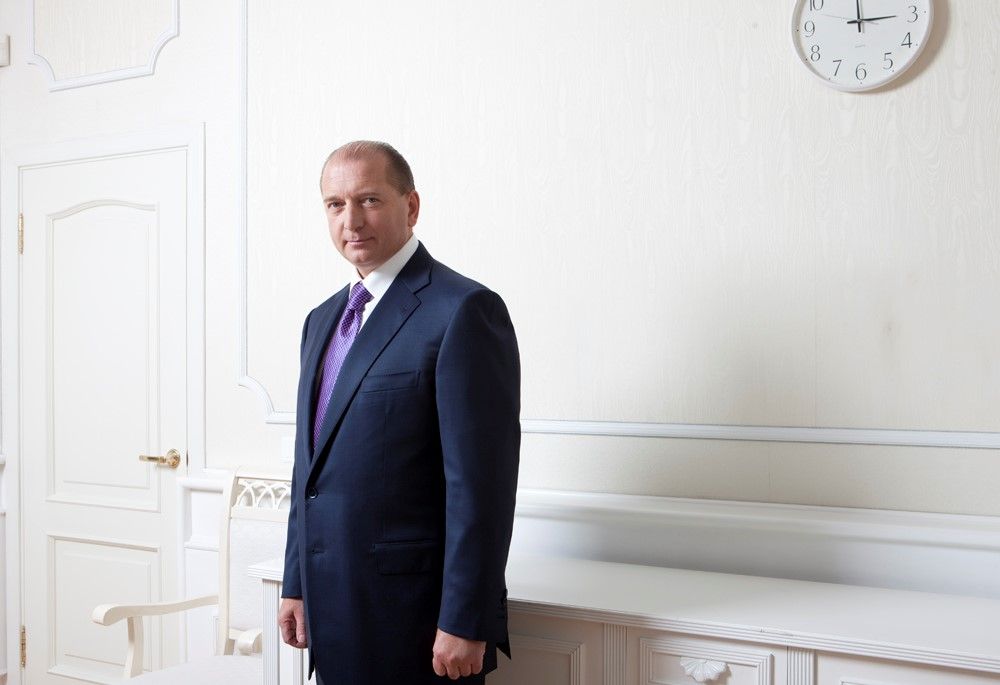 Is Vladimir Artyakov, a member of the team of the Head of Rostec, behind the situation with Karas?

As itis known, industrial extraction of valuable resources has always been in the focus of the Head of Rostec. His deputies should have no less appetites. Artyakov served as head of the Samara region from 2007 to 2012. That is, just when there should have been an active attack on Iskra and a number of other companies that the above-mentioned natives of the Samara region may be involved in.

Now, pay attention, watch your hands. During Vladimir Artyakov's term as Governor of the Samara region, the above-mentioned banker Anatoly Voloshin was his active supporter. And not just a supporter, but also a "realizer" of his initiatives, as they say, on the "earth".

Literally from the first year of Artyakov's governorship the movement "Togliatti, go!" was created. The goal was to directly support the initiatives of the newly elected Samara Governor Artyakov. Anatoly Voloshin, as Chairman of the management Board of CJSC FIA-Bank, was one of the first to join this movement, and there actively supported all the initiatives of Aryakov. Almost nodded. Kommersant wrote about the movement and Voloshin's participation in it.

According to rumours, the Governor reciprocated Voloshin and his Bank. During his governorship, the Bank flourished. Meanwhile, even then the structure could be used to seize other people's property. Once again, it was during this period that the attack on Iskra took place, and in the hands of structures close to Voloshin were JSC Indgold and other gold mining organizations.

After leaving office and becoming the second person in Rostec, Artyakov only strengthened his connections and power. And he had to maintain strong ties with Anatoly Voloshin, his Bank and related people and organizations.

The whole situation, in spite of everything, brings to mind the bloody gang wars in Togliatti in the mid-90s. Then, too, the powerful of this world squeezed business from the unwanted ones, there were entire companies and factories. Years have passed, methods have changed, and the mountains of corpses are not needed anymore.

The motives could remain the same - money and power. And in addition to the collapsed companies, the only human victim of such schemes may be the unfortunate Alexander Karas with his sick heart and passion for gold mining.

But Mr. Artyakov can presumably "get" with another asset, collecting the gold mining holding for his old age.