Register of ambitions of Marat Khusnullin

Marat Khusnullin significantly strengthened his hardware positions - which means that they were strengthened by Sergei Sobyanin, who can count on Khusnullin in the political confrontation with Mikhail Mishustin.

According to the correspondent of The Moscow Post, Deputy Prime Minister of the Government of the Russian Federation Marat Khusnullin can celebrate another hardware victory. Moreover, the victory is large: he was officially appointed curator of Rosreestr according to the distribution of duties, approved by the head of the Cabinet of Ministers Mikhail Mishustin.

Thus, the six-month hardware confrontation between Marat Khusnullin and the former head of Rosreestr, the "social" deputy prime minister Victoria Abramchenko, ended. The latter is still the Medvedev "draft," while Marat Khusnullin is considered the man of Moscow Mayor Sergei Sobyanin.

Previously, Khusnullin was his "construction" deputy, and was considered one of the mayor's closest associates. During the work of the official in the metropolitan city hall in the construction market of Moscow, certain changes took place.

Many former associates of Khusnullin from Tatarstan unexpectedly took high positions in state institutions accountable to the city administration. Ill-wishers began to spread rumors, allegedly Khusnulin more likely represents the interests of the construction lobby than all citizens, regardless of their social status and wealth.

Many associate Khusnullin's entry into the post of deputy prime minister with the failed ambitions of Sergei Sobyanin, who was predicted to take the place of prime minister instead of Mishustin. As a result, everything ended in a political compromise, when the mayor of Moscow did not become the head of the Government, but was able to hold people in the Cabinet of Ministers, whom experts identify as his supporters.

Khusnullin is only one iconic figure from the "Sobyanin" team who ended up in the Cabinet. The other was the head of the Ministry of Economic Development, the former Perm governor Maxim Reshetnikov. In the past, also deputy mayor of Moscow Sergey Sobyanin. Despite the fact that Reshetnikov is one of the most criticized ministers of the Government, all rumors about his imminent resignation were untenable.

Apparently, the loyalty of the former leader helps him maintain his position. However, initially, Reshetnikov was given the former presidential envoy to the Volga Federal District, Mikhail Babich, with whom he allegedly has tense relations. It was assumed that he would gradually take the reins of government, acting in favor of the Mishustin group.

The confrontation between Mishustin and Sobyanin, as well as their inner circle, is usually explained by the alleged presence of both presidential ambitions. They also tried to explain the recent statement of Marat Khusnullin about the enlargement of the regions - a rather slippery topic with huge political overtones.

Khusnullin's thoughts on the redundancy of 85 regions for the country (in the sense that it would be better to enlarge them), RBC quotes. Experts doubt that Khusnullin could make such a statement without coordination with Sergei Sobyanin, whose political interests he can represent.

As for Victoria Abramchenko - her position in the Cabinet of Ministers is strong, but, apparently, not so. Leaving Rosreestr amid several corruption scandals, Abramchenko managed to leave Oleg Skufinsky, who had previously worked with her in the department, as the leader. She herself received the status of curator of Rosreestr. 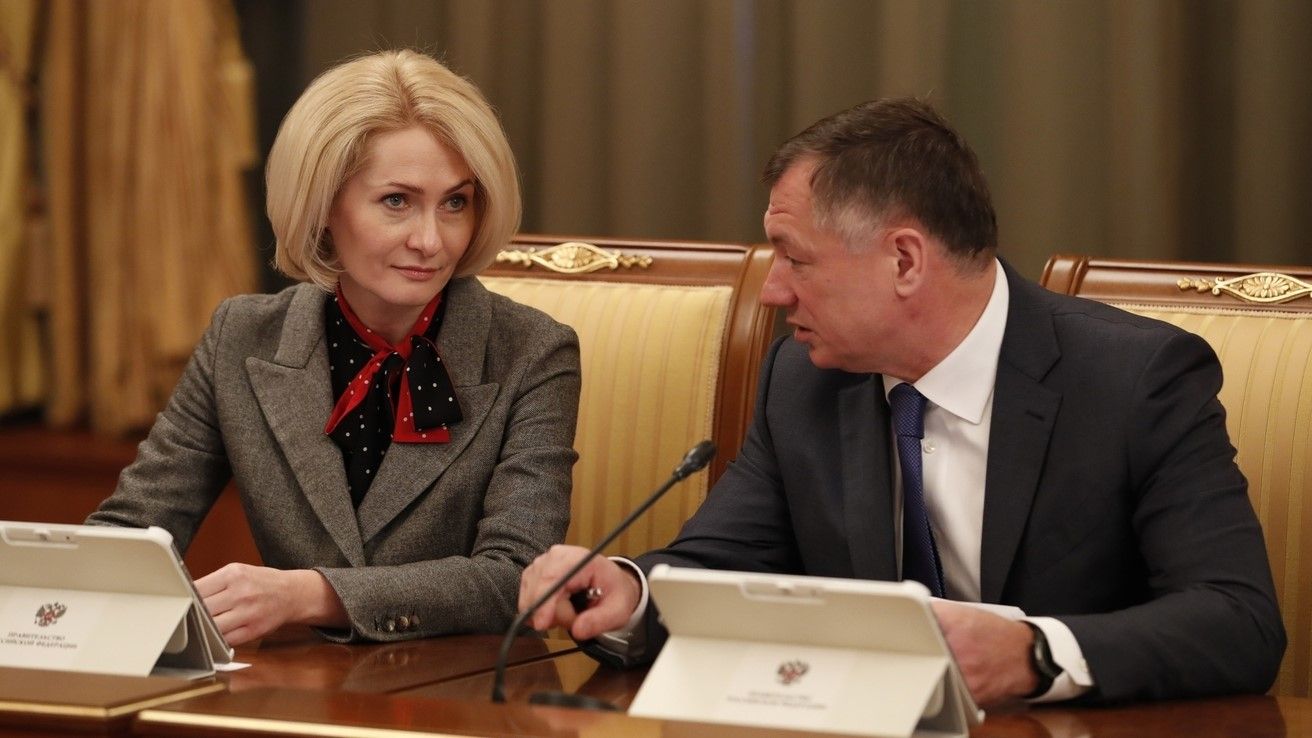 However, Mishustin destroyed this picture. Initially, he appointed his colleague in the Federal Tax Service Alexei Overchuk as the curator of Rosreestr in the Cabinet, thus establishing a certain balance of power between Abramchenko and Khusnullin in this direction. But then, apparently, he was forced to agree to give this functionality to Khusnullin.

Meanwhile, for Khusnullin, who is trying to attribute lobbying to the construction business, curating the Rosreestr gives serious administrative levers to solve quite applied business issues. Thus, he actually entailed not only a state-wide construction block, but also issues of registration of property rights in real estate.

As if in support of this position, two weeks ago he Khusnullin instructed the Federal Property Management Agency to work out the procedure for seizing the property of federal institutions in the treasury without coordination with relevant ministries. About this writes RBC.

This may affect more than 13 thousand state institutions, whose land plots may soon be owned by large development structures. That is, part can simply be sold, and in other areas enter the PPP with a large investor - a practice that became widespread under Marat Khusnullin during his work in the capital's city hall.

In parallel with this, Khusnullin is engaged in road construction. Now the state-owned company Avtodor is preparing for reform, an important part of which will be the issuance of bonds for some projects.

The reform within the structure will be implemented by the chairman of the board of Avtodor Vyacheslav Petushenko. The personality is even more ambiguous than his predecessor in this post, Sergei Kelbach. The latter, recall, is being held in a criminal case on abuse of authority to build the Central Ring Road (CKAD) of Moscow. About this writes RBC.

In parallel with this, many members of Khusnullin's own management team, now tied to the Moscow City Hall, continue to work in Moscow. We are talking, first of all, about such a company as Moskapstroy, which received almost 6 billion rubles on renovation contracts. After the arrival of Khusnullin in 2017, the Moscow government suddenly bought it. Now he is a renovation contractor for more than 140 residential buildings in Moscow. 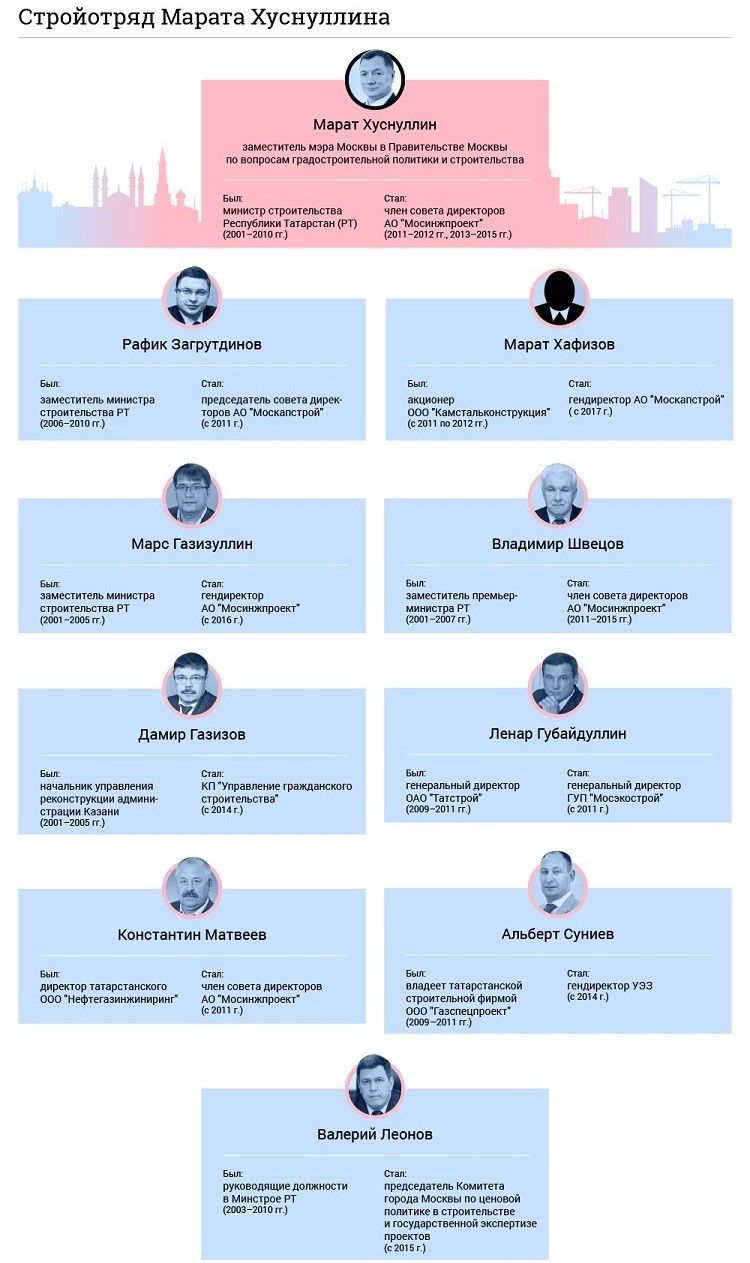 Connections that Khusnullin may have in the construction market

There were other people in Moscow who could be very close to Khusnullin - Rafik Zagrutdinov and Vladimir Shvetsov. The first was Khusnullin's deputy in the Ministry of Construction of Tatarstan, and the second led the Ministry of Transport of the Republic. In 2011, they suddenly received the posts of deputy head of the Moscow construction department, and then joined the board of directors of Mosinzhproekt. About this wrote the publication "Life.ru".

Thus, Marat Khusnullin continues to strengthen his position, but now on a federal scale. Behind his figure should be Sergei Sobyanin, who benefits from strengthening the deputy prime minister. They say that if Sobyanin nominates his candidacy for the presidency in 2024 and wins, Khusnullin will take the post of Prime Minister. There is something to try for.