The 2021 elections were held without serious surprises, all the tasks of the AP were completed, continuity was preserved, but there was no novelty at all.

According to the correspondent of The Moscow Post, Russia continues to summarize the elections to the State Duma, as well as to other authorities, which were voted on in a three-day period on September 18, 19 and 20.

As of the morning of September 20, after processing 59% of the protocols, the United Russia party is expected to lead. As of morning, she received 47.11% of the vote in the State Duma. In second place is the Communist Party with 20.93%, in the third LDPR - 7.91%, the fourth was "Fair Russia - For the Truth" with a support level of 7.54%, and, finally, "New People" receive 5.78% and previously pass to the lower house of parliament.

The remaining batches do not yet pass the 5% barrier. Getting "New People" into parliament was previously predicted by The Moscow Post. This party is considered a project of the Presidential Administration, many perceived it as a spoiler, but the political strategists of the structure were able to show the result, so that "for the first time" in decades representatives of five political parties may be in the State Duma.

"United Russia" also wins in single-mandate districts. Previously, she managed to hold 194 of her deputies out of 225 possible. In second place is the Communist Party with 15 votes, the SRZP has 6, self-nominated candidates take five seats, the LDPR and the rest still pass only one candidate.

Previously, EP has won several regions where the counting of 100% of the vote is completed. This is Kamchatka, where EP took 34%, Chukotka - 46%, Novosibirsk region - 35%, and Khakassia - 33%. From the unexpected - the victory of the Communist Party in two regions, where the EP previously led. This is Yakutia, where the Communists took 35% after processing 100% of the vote, and the Nenets Autonomous Okrug with a result of almost 32% of the vote.

The turnout for the elections according to the result at 18.00 pm on September 19 was 47.7%, which is higher than what political scientists previously predicted. Thus, it was almost possible to repeat the result of the 2016 elections, where it amounted to 47.8%. That turnout, we recall, was the lowest in the history of modern Russia (12% lower than in the 2011 elections).

According to experts, the low turnout benefits United Russia. The reason is high protest sentiment, but many dissatisfied with the current situation in the country prefer not to go to the polls. In any case, it turned out to be higher than the forecasts of some specialists who expected an average turnout of 35-40%. 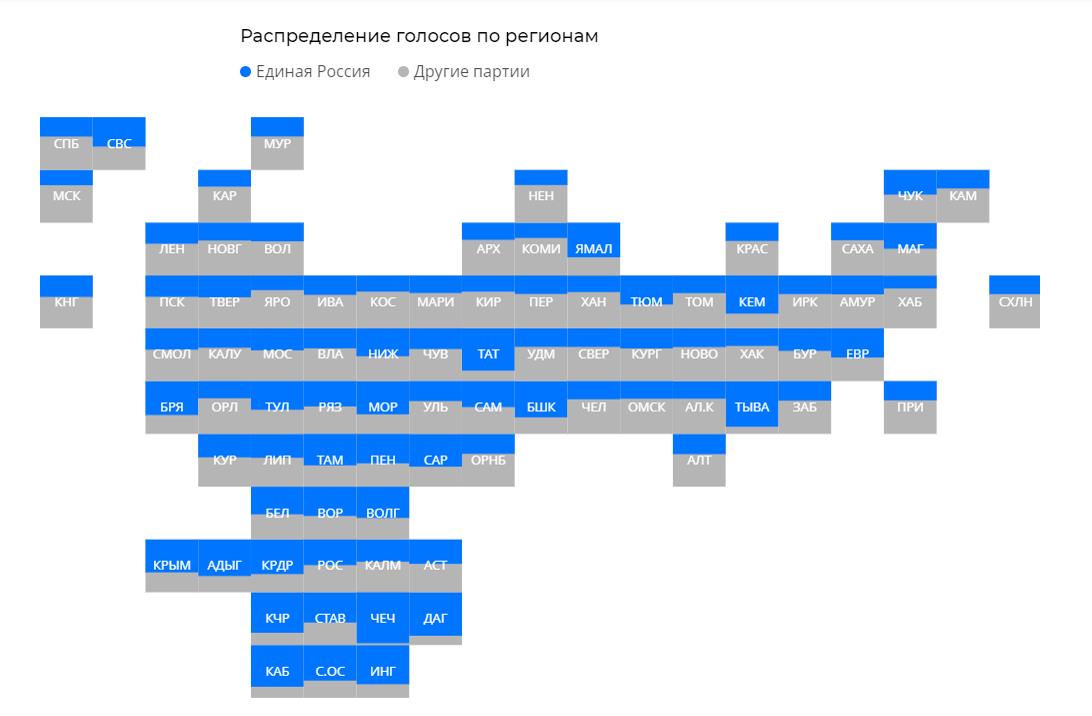 The ratio of votes for EP in the regions in relation to other parties, infographics RIA Novosti

Earlier it was reported that the Presidential Administration allegedly unofficially faced just such a task - to ensure the turnout and result of United Russia at the level of 45%. Thus, it can not be stated at a preliminary stage that the political bloc of the AP, which is headed by deputy head Sergei Kiriyenko, coped with the task.

While the counting continues, political leaders comment on the preliminary results. So far, United Russia is gaining a simple, not constitutional, majority. According to the Secretary of the General Council of the party, Andrei Turchak, the goal of the party is precisely the constitutional majority, for which it is necessary to gain two-thirds of the vote, that is, more than 300 mandates.

In the last election cycle, with the lowest turnout in the history of modern Russia, the party in power succeeded. Now the prospects look much more vague, including due to the passage of "New People" to parliament, and the victory of a number of self-nominated candidates.

Turchak indicated that the party continues to strive for the goal of obtaining a constitutional majority, and he himself will hold meetings with the five leaders of the election list to discuss the party's program and their positions on work in the State Duma.

At the same time, party leaders on party lists have not yet decided how they will dispose of mandates. However, there is no special intrigue here. For example, with a high degree of probability, Russian Foreign Minister Sergei Lavrov, who was one of the five parties, will continue to work in his post.

Other notable figures include Sergey Protsenko, chief doctor of the hospital in Kommunarka, Elena Shmeleva, co-chairman of the All-Russian Popular Front, Anna Kuznetsova, and others. Andrei Turchak intends to meet with all of them in the near future to discuss further plans.

"This is their decision (whether to retain the mandate). We will communicate with them, tomorrow I have a meeting with Anna Kuznetsova, including as part of the budget process, because the initiatives that she voiced require budget coordination, "Kommersant quoted Turchak as saying.

Meanwhile, earlier it was suggested that these heavyweights would be only a "steam locomotive," which would drag the "locomotive" of United Russia to the State Duma. So far, this is justified.

However, there were, of course, violations. And here, the point of tension, expected, was St. Petersburg - the most problematic subject from this point of view in recent years. Earlier, a conflict erupted between the city leadership and the CEC, as a result of which the local leadership of the election commission was changed. This happened last year.

St. Petersburg is leading in the number of "fake" attacks in the elections to the State Duma, said the head of the working group on public monitoring of remote electronic voting of the coordinating council at the Public Chamber of the Russian Federation Alexander Malkevich.

"Unfortunately, they received neither support, nor understanding, nor from the executive, nor from the legislative branch. In the end, all these organizers of such outrage should be held accountable, the inevitability of punishment should eventually come so that they do not disgrace the wonderful city loved by all Russians, "the CEC head quotes Lenta.ru.

Rostelecom President Mikhail Oseevsky said that a total of 19 attacks in three days were committed on online voting systems and election-related portals, in particular the CEC website. 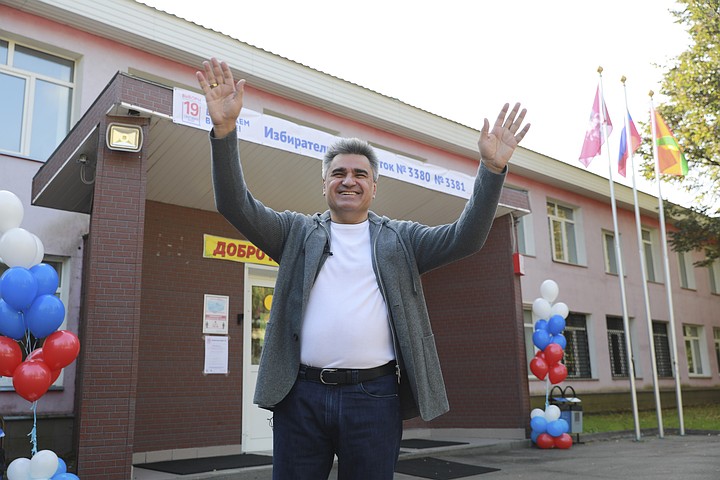 However, they did not affect the result of the will of citizens. The monitoring group of the Human Rights Council, working in 11 regions, also recorded the absence of serious violations in the elections. As the head of the HRC Valery Fadeev noted, most of the complaints are false.

Meanwhile, our editors receive conflicting information on this subject. Strange press releases allegedly come to the editorial post from representatives of Just Russia For Truth, who are trying to draw the attention of the media to various controversial points in the regions. However, this information has not yet been confirmed.

In general, the SRZP is called the main troublemaker in these elections. This means not only the election campaign itself, but also the political confrontation within the party - between the conditional support group of Sergei Mironov, and those who are grouped around the new party leader, writer and politician Zakhar Prilepin.

The head of the party, Sergei Mironov, announced "stuffing" in the ballot boxes, which could affect the result, as well as the inadmissibility of SRZP observers. In response to this, the Bashkir head of the NWRP, Yuri Ignatiev, said that Mironov was simply incorrectly informed of violations.

According to Yuri Ignatiev, quoted by TASS, what is happening now is "some characters are trying to seize power." Apparently, the hint is precisely on Mr. Prilepin, with whom many party conflicts are associated.

A few words should be said about the international reaction. It is expected to be far from adequate - if we are talking about the European Union. On September 16, the European Parliament adopted a report with a clause on non-recognition of elections to the State Duma in case of mass violations. The report laid the foundation for a new strategy of relations with the Russian Federation, although the novelty is not clear.

However, the EU called not to recognize the elections even before that, and without amendments to any violations. In addition, the OSCE refused to send its observers, which in itself makes the EU position at least inconsistent and illogical.

One thing is clear - the elections took place, their results will be accepted by the majority of Russians as legitimate, and massive violations and high-profile scandals were avoided. Thus, the current course will continue - not without amendments and discounts on the orders of voters. 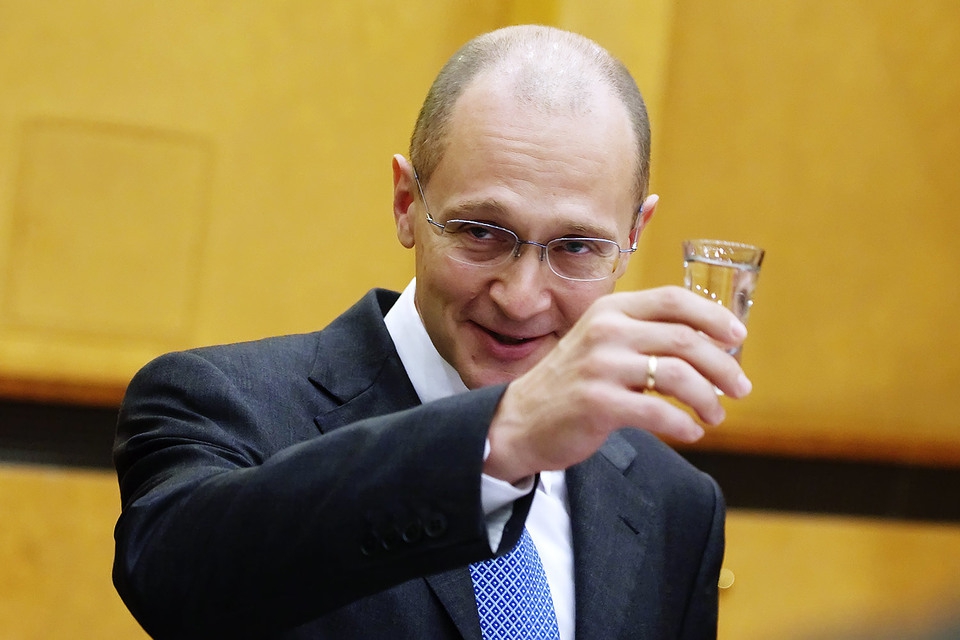 The main surprise was the passage of "New People" - and that is because earlier the party composition of the State Duma did not change for decades. However, over the coming hours, some numbers may change - insignificantly.