"Deceive" all and "rest" in Arkhangelsk

After people close to God Nisanov seized the firm of his former partner, the oligarch's structures are buying up historical objects.

Behind the claim about the removal of Ilgar Hajiyev from the owners of Comfortinvest the interests of the businessman God Nisanov can be hidden. A person close to him, Albert Imanilov, could have participated in the alienation of the Ilyinskoe boarding house, and previously – to conduct business with Vekselberg and the family of the President of Tatarstan, Rustam Minnikhanov.

As The Moscow Post correspondent reports, the Moscow Arbitration Court decided to exclude developer Ilgar Hajiyev and his business partners from the ownership of the Moscow developer company Comfortinvest, which built the problematic residential complex Pirogovskaya Riviera. He owns 18% of Comfortinvest. In addition, Style LLC with a share of 51% was excluded from the structure.

This decision was sought by another majority owner, Albert Imanilov, who owns 30% of the company. He can act in the interests of the capital's oligarch, the owner of the Kievskaya Ploshchad GC and many of the capital's markets, God Nisanov. Structures and people close to the oligarch were Hajiyev's partners in the implementation of this and some other projects.

Ilgar Hajiyev is certainly not a saint. Now several criminal cases are being investigated against him, but they are still far from their logical conclusion. This is written by the Versia publication.

Hajiyev himself attributes the failure of the implementation of  Pirogovskaya Riviera with the fact that his business was seized: SDI Group, the money of the real estate investors from Comfortinvest was withdrawn, and a criminal case was opened against him. This could be done under the control of God Nisanov, because in the end, Hajiyev's former business was in the hands of people who were not strangers to him. 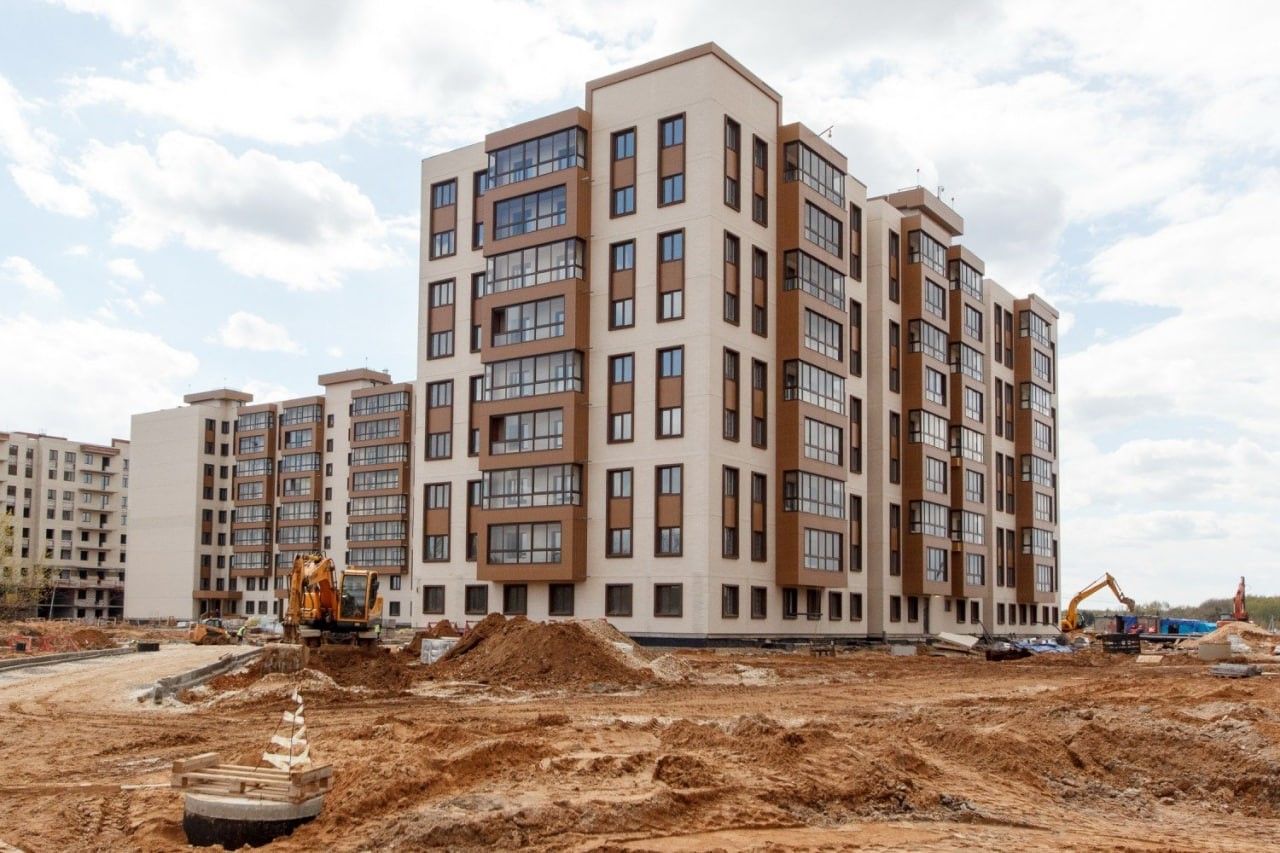 Pirogovskaya Riviera RC. While the former partners are involved in court cases, people still can get neither money nor housing

God Nisanov is a powerful man, without a doubt. He is considered close to the Moscow authorities, owns a series of indoor markets in the capital. In addition, his cousin Oleg Yusupov had a business with the son of the Interior Minister Alexander Kolokoltsev - restaurant companies Il Forno and Brinde. Is it possible that because of these connections, all of Nisanov's reports to the police and other authorities about the "seizure" of the business did not go anywhere?

Albert Imanilov, who filed a lawsuit to exclude Hajiyev and Style LLC from the ownership of Comfortinvest, may act in the interests of Nisanov. When Hajiyev had already left the country, the developer company tried to go bankrupt. Why would this be necessary - maybe to hide the traces of a possible withdrawal of money?

The lawsuit was filed by entrepreneur Yana Martenson. Her family owns the former asset of Boris Varshavsky - the Rostov Steel Rolling Plant, where she works as a general director. However, it is rumoured that the real owner may be an odious entrepreneur, the owner of the Russkiy Les group, Timofey Kurgin. The latter is considered to be close to Nisanov.

Anyway, after the prosecution of Hajiyev began, there was still a problem - he was among the owners of Comfortinvest, and prevented an attempt to bankrupt it. Perhaps it was for these reasons that Albert Imanilov filed his lawsuit in court. The latter is called God Nisanov's man. Kommersant directly writes that he previously acted in the interests of the Kievskaya Ploshchad GC, acting as a purchaser of certain objects.

It should be noted that during the trial at the request of Albert Imanilov, the court immediately imposed a ban on the change of the general director of Comfortinvest Nikita Danilchenko. The latter could be a figurehead when conducting operations with the company's funds. Apparently, this is why Imanilov insisted that he remain in the CEO's chair - even after Danilchenko was put behind bars.

That's right, now Danilchenko is in places of deprivation of liberty for committing a serious crime against an individuality. Nezvisimaya Gazeta writes about this. Nevertheless, Imanilov requested that Danilchenko remain in office. Moreover, Danilchenko himself issued a notarial certificate to a certain person named Yadrenov, who could also act in the interests of Imanilov.

Thus, Imanilov could gain full control over JSC Comfortinvest, although he was initially present in the case, as a minority shareholder in relation to two other participants - Hajiyev and Style LLC. So he could get support from the company in the lawsuit itself, in his own claim. 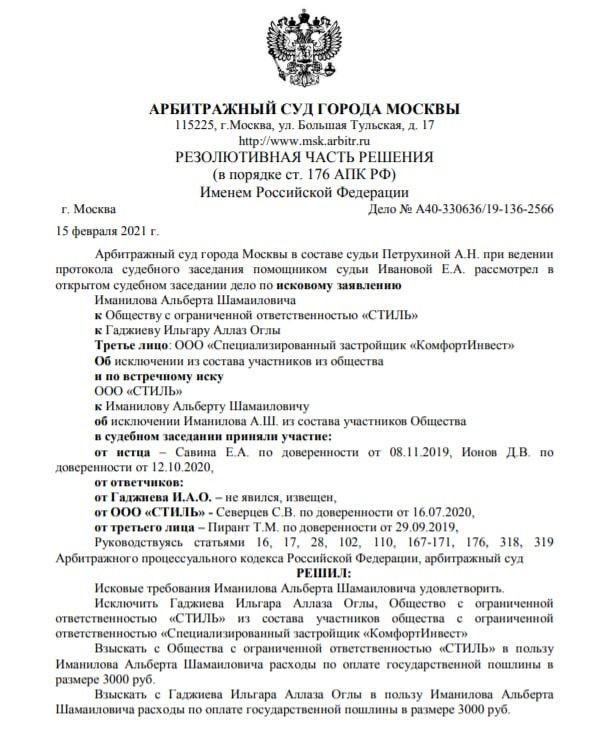 At the same time, Imanilov demanded to stop Hajiyev's participation in the company on the grounds that he allegedly caused damage to it. But this is not recognized by any court, and the audit report that the plaintiff submitted to the court was drawn up without compliance with Article 82 of the APC of the Russian Federation on the appointment of an expert examination. That is, the base is very muddy, and inconsistencies can be clearly seen.

However, now Hajiyev will not prevent the bankruptcy of Comfortinvest, which automatically means that the money will not be returned to the shareholders. He will not hinder even if the company avoids bankruptcy, and will be quietly liquidated with those assets that are still left for it.

Meanwhile, many still do not understand where and how Imanilov himself came from. He was not interested in the development business before Comfortinvest. But other things may connect him with Hajiyev. As Kommersant wrote, in 2019, he and Roman Agababaev became the new owners of Bereg LLC, which received the Ilyichevo boarding house in the village of Ilyinskoye in the Krasnogorsky District of the Moscow Region.

The publication directly wrote that Imanilov had previously conducted transactions in the interests of the Kievskaya Ploshchad GC. And it was God Nisanov and his partner in the company Zarakh Iliev that the journalists called the actual beneficiary of the Moscow Government's deal with the boarding house.

This is the "golden" land of the Moscow region, which, at least, was previously protected by the state. Among the owners of the object until 1917 was the Romanov family, and during the Soviet era, high-ranking party workers lived in the estate. Now it is one of the most expensive sites outside the capital due to the proximity to the Novo-Ogarevo presidential residence.

With what great grace should the authorities transfer this structure to the management of a company that may be directly or indirectly connected with major metropolitan developers? Meanwhile, rumours about Nisanov's proximity to Sobyanin continue to circulate in the construction market.

The territory of the Ilyichevo boarding house has an interesting history. It, along with several other hotels, belonged to the Visit-Moscow LLC, established by the Moscow Region and Moscow. In 2006, the Moscow Region, together with Viktor Vekselberg's RAM LLC, which had 4.5 hectares of land near the Apollo Grove, established OJSC ARMO-Invest.

The Moscow Region transferred its 13.4% stake in Visit-Moscow LLC to the new company. These 13.4% of Visit-Moscow LLC accounted for 37.7% of the authorized capital of JSC ARMO-Invest, they were estimated at 117 million rubles. In 2008, the region auctioned its 37.7% of ARMO-Invest at an initial cost of 118.3 million rubles. RAM LLC became the winner of the auction by purchasing these shares. This was reported by Skandaly.ru.

But at the same time, the already mentioned Visit Moscow LLC in 2009 established Bereg LLC, which is also registered in the Ilyichevo boarding house. It rents out the buildings of the boarding house, and previously belonged to the owner of the Adamant holding, a "reputable" businessman from St. Petersburg, Vladimir Golubev.

However, later Bereg was owned by Albert Imanilov and his partner Roman Agababayev. In 2019, Albert Imanilov resigned from the founders, but he could only do it for show, in fact, representing the interests of completely different beneficiaries. In the end, such a possible beneficiary, God Nisanov, receives too much attention due to the fact that his Kievskaya Ploshchad GC repeatedly receives the most "delicious" pieces of the capital's real estate.

At the same time, something strange began to happen on the land of the boarding house, on which many cultural heritage sites were previously located. In 2014, the head of the council of the regional Society for the Protection of Historical and Cultural Monuments, Yevgeny Sosedov, published a petition in which he pointed out that cultural heritage objects were being illegally demolished on the territory of Ilyichevo.

The expert called the estate itself one of the most significant historical monuments of Russia. However, despite all this, in 2017, Bereg LLC managed to gain that part of the buildings of Ilyichevo was excluded from the register of cultural heritage objects. This is written by Kommersant.

In addition, earlier the structures of Vekselberg transferred part of the park of the Arkhangelskoye estate for rent without any security encumbrances. That is, almost anything can be done there. Apparently, the entire territory attracted a large development group that wanted to build up expensive land with no less expensive cottages. And initially, it could act together with Vekselberg and the authorities of Moscow and the Moscow region, who turned a blind eye to all these "actions".

The powerful of this world

In addition, Albert Imanilov was the founder of the company "KET K", which later became owned by Leon Nisanov, a likely relative of God Nisanov, and Ilhanan Izraev. The company itself was liquidated - its legal successor was TPU Nagatinskaya LLC, which implements a major infrastructure project to create the Nagatinskaya transport interchange hub.

It is easy to guess that Kievskaya Ploshchad GC of God Nisanov is engaged in the implementation of this project. At the same time, until April 2020, Alexey Rogozin, the son of Roscosmos CEO Dmitry Rogozin, was the general director of the TPU Nagatinskaya.

Detractors tried to link the latter due to the possible desire of the Kievskaya Ploshchad GC to get the "golden" lands of the Moscow region, owned by Khrunichev State Research and Production Space Centre, which is part of the Roscosmos State Corporation. However, even if such a desire was really there, it was not possible to "tear" this territory from the centre.

According to evil tongues, allegedly giving a working place in the TPU Nagatinskaya to Alexey Rogozin could be something like a bribe to the Rogozin family for assistance in resolving the issue of the centre's lands. Whether this is true or not is unknown. But later Rogozin left the post, having worked on it for only a few months. Although, according to rumours, he still continues to work in the company, but without too much "noise".

The competition for the construction of the TPU KET K won back in 2013. And in 2017, Imanilov sold his share to people who may be close to God Nisanov. But what is even more interesting, before this story, the company KET K was owned by another famous character - Roland Isaev, who, according to rumours, is acquainted with the leaders of criminal groups from Azerbaijan. 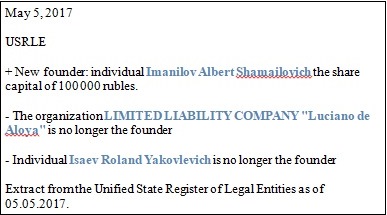 In addition, the same company was owned by a very well-known structure - Luciano De Aloya LLC (now -Luciano LLC). But its owner is Gulsina Minnikhanova, the wife of President of Tatarstan Rustam Minnikhanov. Previously, she was repeatedly recognized as the richest wife out of the spouses of the heads of Russian regions.

Whether the influential Minnikhanov family from Tatarstan could be somehow connected with God Nisanov and major infrastructure projects in Moscow and the Moscow region is a mystery. One thing is clear, God Nisanov and all his partners are not ordinary but powerful people. Usually such people prefer to act with someone else's hands, so as not to attract attention to themselves. Big money likes silence, and destroyed businesses and criminal cases against opponents for them are like chips that, as you know, fly when you cut down the forest.