Barin "Nikita" is out of business

Why do top officials avoid meetings with Nikita Mikhalkov? Are there bad times in the life of a famous cultural figure?

Nikita Mikhalkov, a sleek dandy, known in cinema circles as "Sharfik", is rumored to be unable to get an audience in the Kremlin. As the detractors say – "Well, they don't want to see him, that's all."

And this, apparently, greatly worries Mr. Mikhalkov, because he has so many business projects, but how can it be without the support from above, to which Nikita Sergeevich has become so used over the years?

Perhaps Mr. Mikhalkov is not allowed in the Kremlin for an obvious reason: he is too closely associated with the infamous businessman Konstantin Malofeev. However, Malofeev now has his own problems — a huge number, although he is trying to stay afloat, advertising both his large-scale activities and the work of certain murky projects on Tsargrad TV. All this led to the collapse of Mr. Malofeev's party project. But with this project, he hoped to enter the State Duma of the Russian Federation in 2021... But, alas!

Interlocutors from Nikita Mikhalkov's entourage say that the cinematographer himself is furious not only because he is not allowed in the Kremlin Chambers, but also because evil journalists spread this fact everywhere.

While Mikhalkov is trying to get into the Kremlin by hook or by crook, the well-known publicist Alexander Nevzorov once again diagnoses him: "Nikita Mikhalkov inspires serious concerns after all his speeches about talking reptiles and chipping that he can bite the ear off." You can find out about the diagnosis here.

What is the secret of such a "fall" of Nikita Mikhalkov, who for so many years in a row was not only caressed, but also marked with numerous awards, prizes and even entire buildings for the benefit of culture in the very centre of Belokamennaya?

Fables are not for "Solovey"

There is no doubt that everything that is happening around Mr. Mikhalkov today is the result of his not very noble behavior.

Recently, Nikita Sergeevich distinguished himself in several high-profile scandals: including the closure of the famous cinema centre named Solovey on Krasnaya Presnya, which eventually was decided to be demolished. The tasty plot passed to Vadim Merkin, a friend of Mr. Mikhalkov, who until recently was the owner of the failed Khovansky Bank. This was written in detail by The Moscow Post.

Thus, all the promises of Mikhalkov to protect the Solovey cinema centre are not worth a penny.

They say that it was Nikita Mikhalkov who advised the mayor's office to pass the plot to Vadim Merkin. This was also written by The Moscow Post.

And the protest pas de deux of Nikita Mikhalkov together with Minister of Culture Vladimir Medinsky (already former) looked very strange: after all, it was the Union of Cinematographers that resold the complex on Krasnaya Presnya (which later became known as Solovey) in 2005. 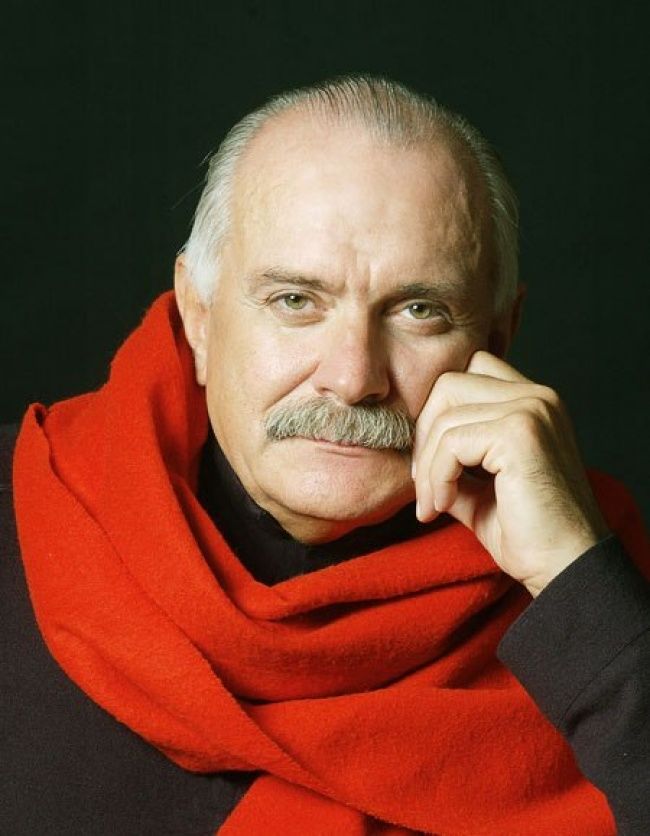 We leave one by one, if there's anything - we are geologists

The cinema centre on Krasnaya Presnya was estimated at about 6 billion rubles. But the Moscow mayor's office received about 100 appeals from prominent cultural figures and ordinary Muscovites: they asked not to destroy the cimema centre.

Today it is already known that they want to build a residential complex with a total area of 84 thousand square metres on the site of the cinema. 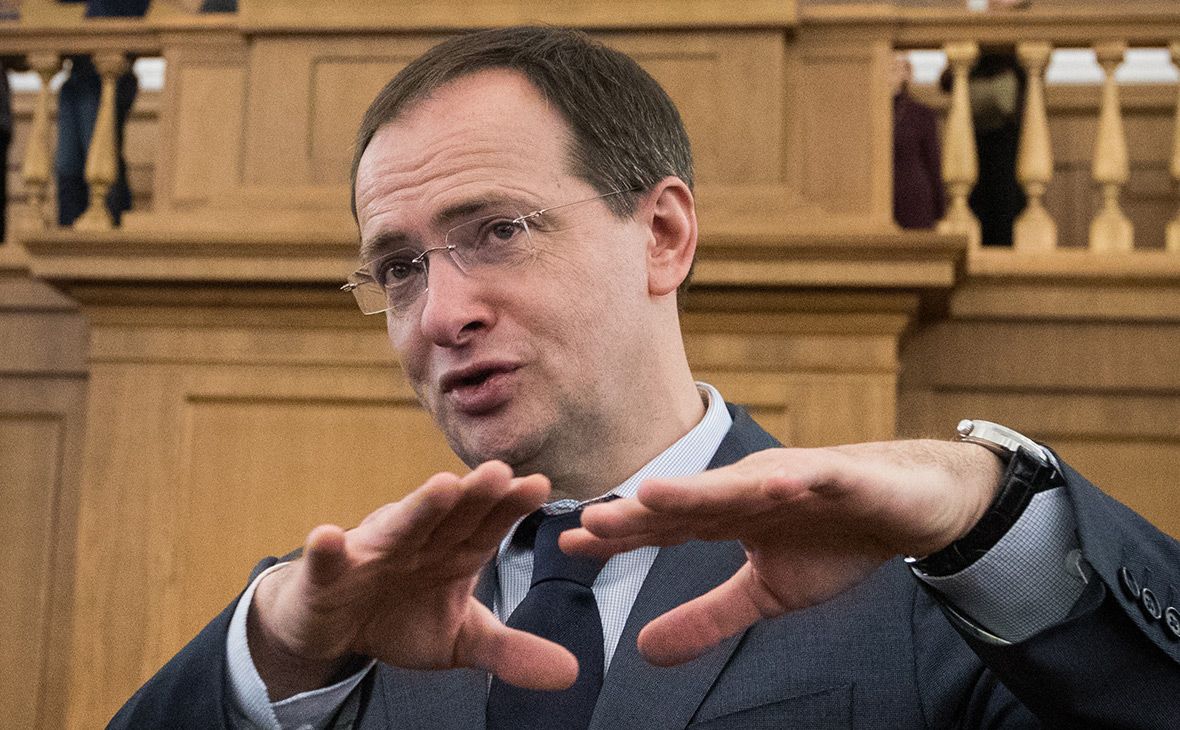 Former Minister of Culture of the Russian Federation Vladimir Medinsky

For more than one year, Mr. Merkin has been following the trail of a gambling business. Mr. Merkin is said to have raised funds from the city hall for his non-transparent projects. And communicated directly with the mayor (at that time) Yuri Luzhkov. Mr. Merkin gave Luzhkov promissory notes from the Bank for various projects. But he preferred not to pay off the bills. According to some estimates, the capital's Treasury has eased by 280 million rubles over the entire period of cooperation with the banker. This was written by The Moscow Post.

Vadim Merkin appeared to be involved in a scandal in 2012. Then the office of the President decided to buy townhouses in the village Polyanka Deluxe for 136 million dollars. As it turned out, these cottages belonged to Laboratoriya of Zagorodnoy Zhizni LLC of Vadim Merkin and his partner Dmitry Lukyanov. An offshore company from the island of Cyprus was its founder. They say that the officials who decided to buy elite Fazenda were connected with both Merkin and his Bank Khovansky. 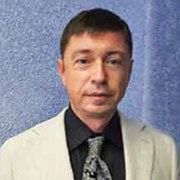 The only photo of Vadim Merkin

It was said that Vadim Merkin was closely connected with the security forces, as if he served not only legal casinos, but also illegal ones. The former head of the MID at Russian MIA General Administration for the Moscow Region.

Alexander Voronin, as well as a certain Oleg Sudakov, a businessman - "solver", could "protect" the quick banker. Help could also come from the former First Deputy Prosecutor of the Moscow region Alexander Ignatenko. The Moscow Post informed on it. 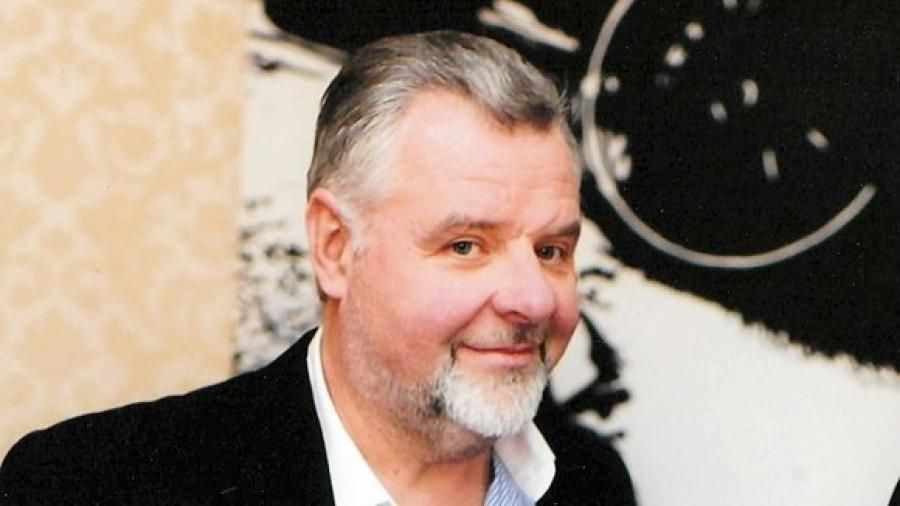 But, apparently, Merkin's "friends" can do a lot, but not everything. As a result, the Central Bank became interested in the activities of the Khovansky Bank: gambling was the reason for this interest. In 2018, the Central Bank revoked the license from Khovansky Bank. Merkin was not at a loss: he joined J&T Bank a.o. However, J&T Bank also had very muddy indicators. And the credit rating of this Bank is negative.

So is the money being "laundered"?

It turns out that Merkin did not really get on well with banks, so he headed to to the construction business, didn't he? Decided to build up (with the help of Mr. Mikhalkov) the territory of the former Cinema Centre "Solovey"?

Mr. Mikhalkov was connected (and probably still is) not only with Vadim Merkin, but also with a certain Andrey Simanovsky, who appeared next to the master as soon as it became known that Mr. Mikhalkov had received the Moscow State Cinema Actor's Theatre (Teatr Kinoaktyora) for his extensive activities. 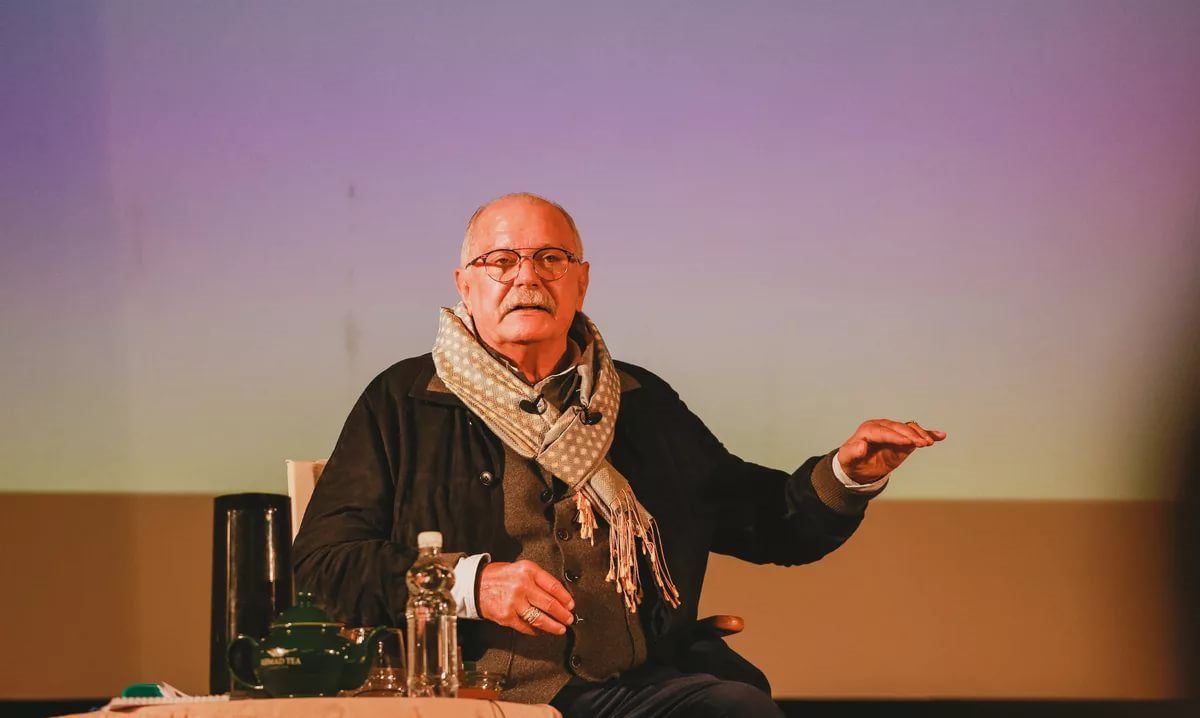 Let us recall that the Academy of Cinematographic and Theatrical Art of N.S. Mikhalkov received a license in 2015. And immediately settled on three floors of the Theatre of the Cinema Actor (Teatr Kinoaktyora) on Povarskaya street: in the past - this is the historical House of political prisoners.

It should be noted that with the appearance of Mr. Mikhalkov in the former building of political prisoners, chic restaurants began to replace each other. On the facade of the building, the theatre's posters were replaced with a portrait of Nikita Mikhalkov with an advertisement for the Academy. Becoming the actual owner of the Theatre of the Cinema Actor, Mikhalkov started a grand renovation. And the first thing he did was to evict not the restaurants, but the theatre along with the actors. 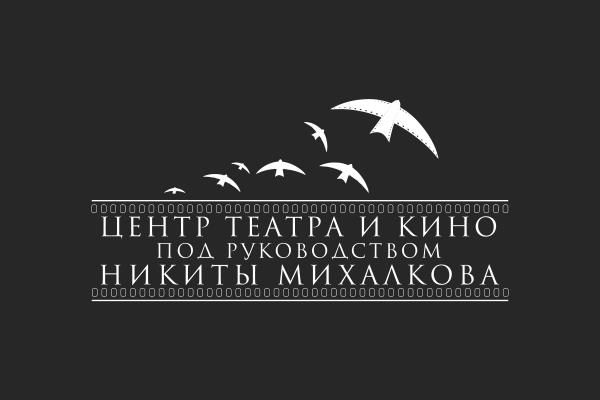 Thus, in the 2016-2017 season. for the first six months after the appointment of Mikhalkov, the theatre did not play a single performance! But what kind of celebrations the Academy of Mikhalkov began to hold in the Theatre of the Cinema Actor on Povarskaya street!

The performers, annoyed by this situation, sent a letter to the Prosecutor General's office with a request to open a criminal case against the management under the article "Causing property damage by deception or abuse of trust".

The performers believed that the profit from the lease was not for the needs of the theatre.

But the email went away, they reported some kind of verification, and then everything stalled!

Many actors were soon fired, but life in the building on Povarskaya street was still full of life. The Mikhalkov Academy of cinematography and theatre arts, the Vivaldi orchestra under the direction of Svetlana Bezrodnaya, and two restaurants continued to rent space in the theatre.

The Vivaldi Orchestra occupied one hall for rehearsals and recreation of actors of the theatre. As for the Academy, it occupies 400 square metres, that is, half of the theatre. Previously, these rooms were reserved for rehearsals, sets and equipment. The theatre was once the Billiards room for the actors and employees of theatre where they could rest. But with the arrival of Mikhalkov's the entrance to it was forbidden.

The number of tenants has increased over the past 5 years. 10 performances were removed from the playbill, and these productions are listed in the repertoire on the theatre's website.

The performers who have stayed in the theatre complain that the administration constantly refers to the lack of money for the production of performances. The scenery is outdated, and if a theatrical costume was torn, it had to be repaired on its own.

Therefore, the performers quite naturally have a question: where did the millions received from renting out the stage and theatre premises go and keep going?

Performers of the theatre tried to resist for a long time, but it has long been known that Nikita Mikhalkov writes laws "for himself": he can kick an immobilized opponent in the face, it is permissible to drive in the oncoming lane, he allows himself to squeeze a seven-storeyed hotel into the old Moscow landscape. And replace the world's first theatrical association of film actors with a completely new education, so to say, "for himself".

All the metamorphoses on Povarskaya took place with the help of a certain Andrey Simanovsky, a businessman from the Urals. He became famous throughout the world for decorating his native school No. 106 in the Sverdlovsk region in such a way that the school looked like a Golden snuffbox.

However, Mikhalkov invited Simanovsky not just to cooperate, but to become an investor! But it is unlikely that both Mikhalkov and Simanovsky were motivated by an interest in art. 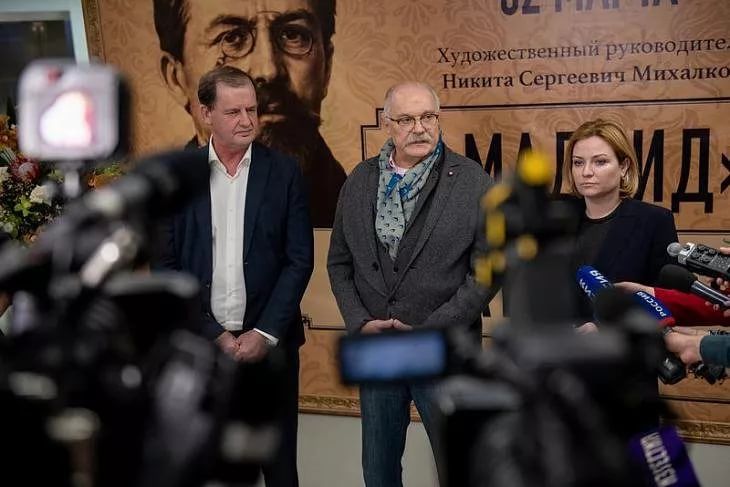 Andrey Simanovsky (on the left) with Nikita Mikhalkov

Just a few words about the personality of Simanovsky, who is considered a "shadow" billionaire of the Urals.

Simanovsky is rumoured to have accumulated his capital by deceiving Chinese manufacturers: the businessman allegedly just "threw" his partners, and spent the millions received through numerous one-day firms. He turned his business schemes allegedly through bribing officials of various departments. This was reported by The Moscow Post.

Such an investor came to the theatre building on Povarskaya street. 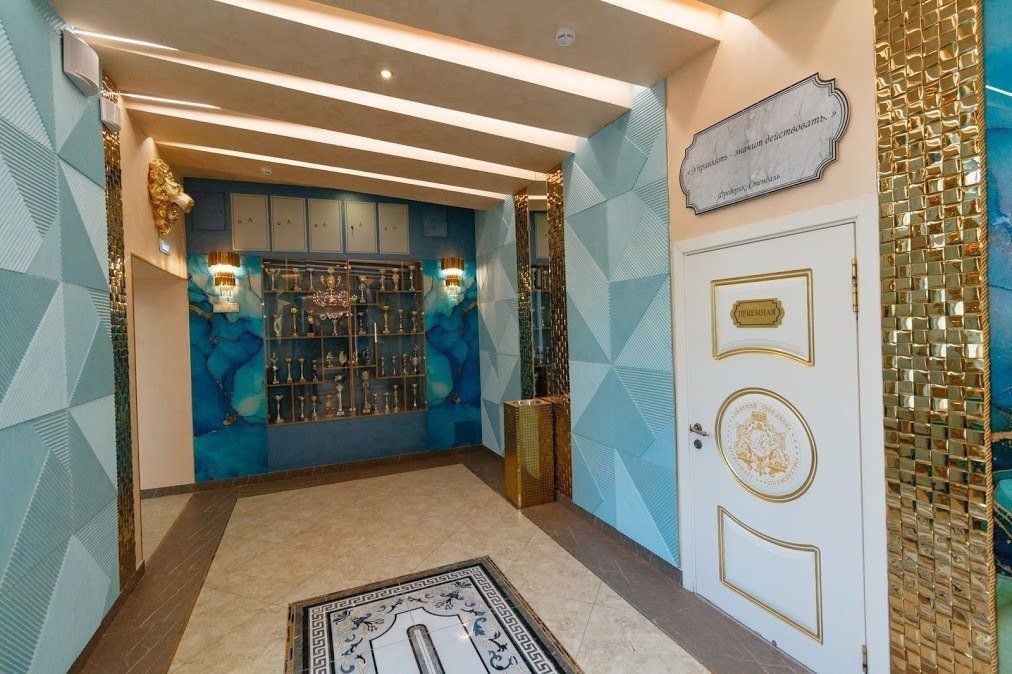 Golden school No. 106 in Yekaterinburg

This was reported by Komsomolskaya Pravda.

Where did such capital come from? And where did the cinematographer's wife Tatiana Mikhalkova, who is called "Bantik" behind her back, get a villa with a pool in Spain, in San Roque for 4 million euros? 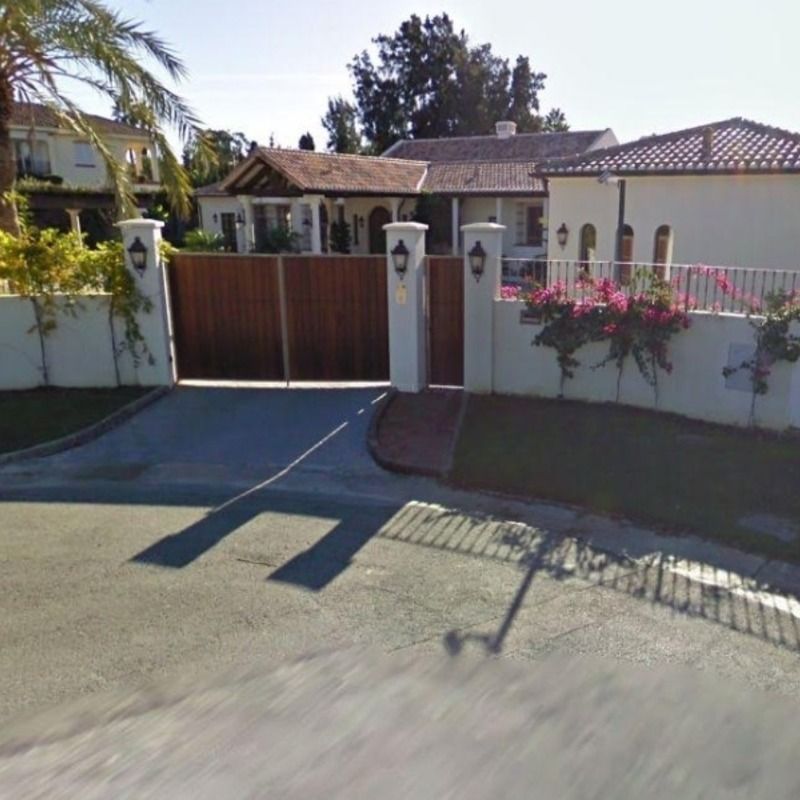 The Mikhalkovs' villa in Spain

Nikita Mikhalkov could easily "attach" to the budget money of the The Russian Union of Rightholders , since he is one of the leaders. One of the founders is Russian Authors' Society. However, the former General Director Sergey Fedotov not so long ago was sent to the colony for embezzlement of 300 million rubles. 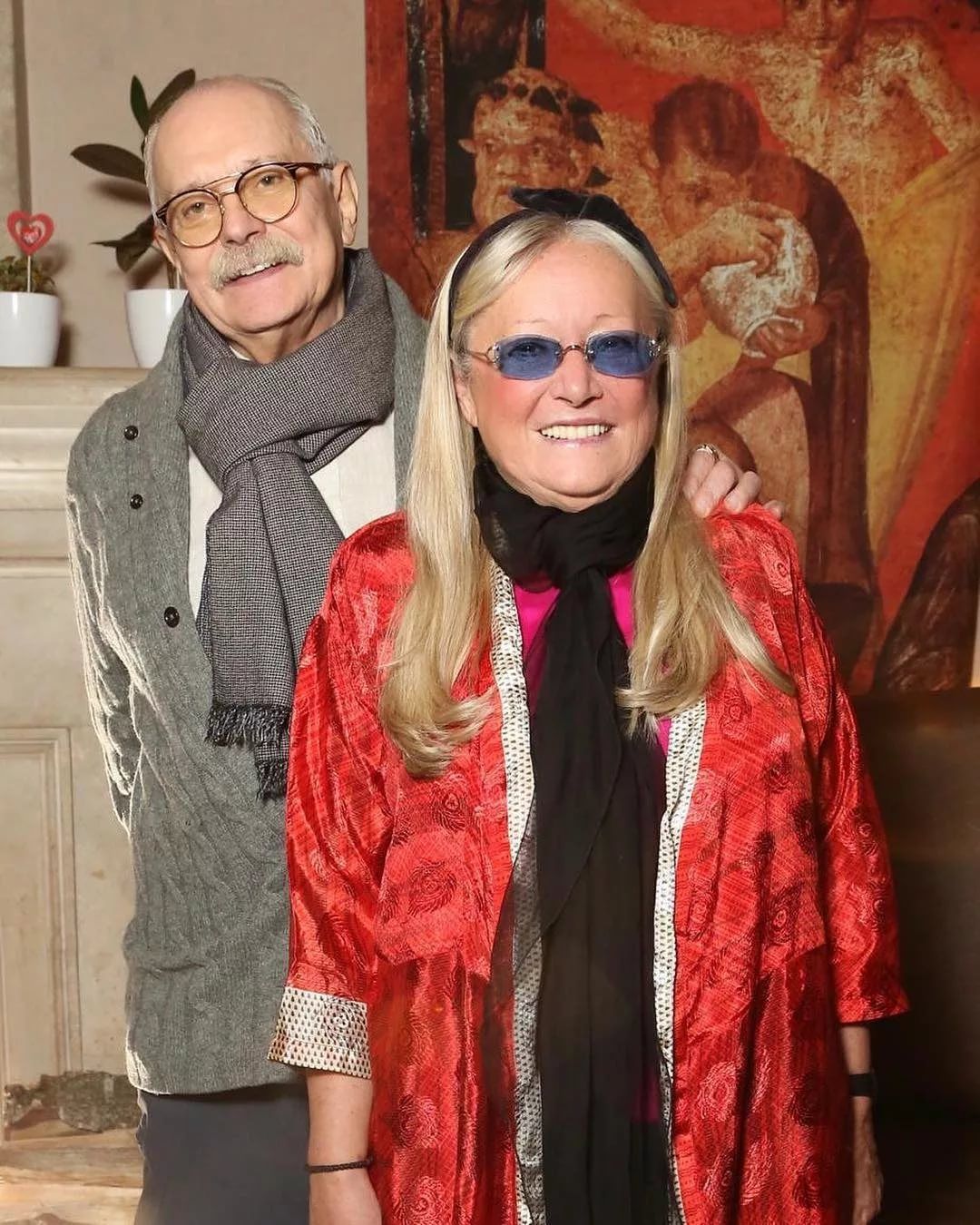 In general, the main master of Russian cinema had a lot of sources of "left" income.

Many people talk about Mikhalkov's violent temper and arrogance... In particular, in the actor's environment they like to recall, how Nikita Sergeevich Mikhalkov quarrelled with Mikhail Olegovich (Yefremov). All this happened shortly after the premiere of the film "12".

Nikita Sergeevich invited the entire creative group, including Mikhail Yefremov, to his country house to celebrate the release of the picture. But Yefremov drank too much and drove Mikhalkov to hysteria with his verbal attacks. 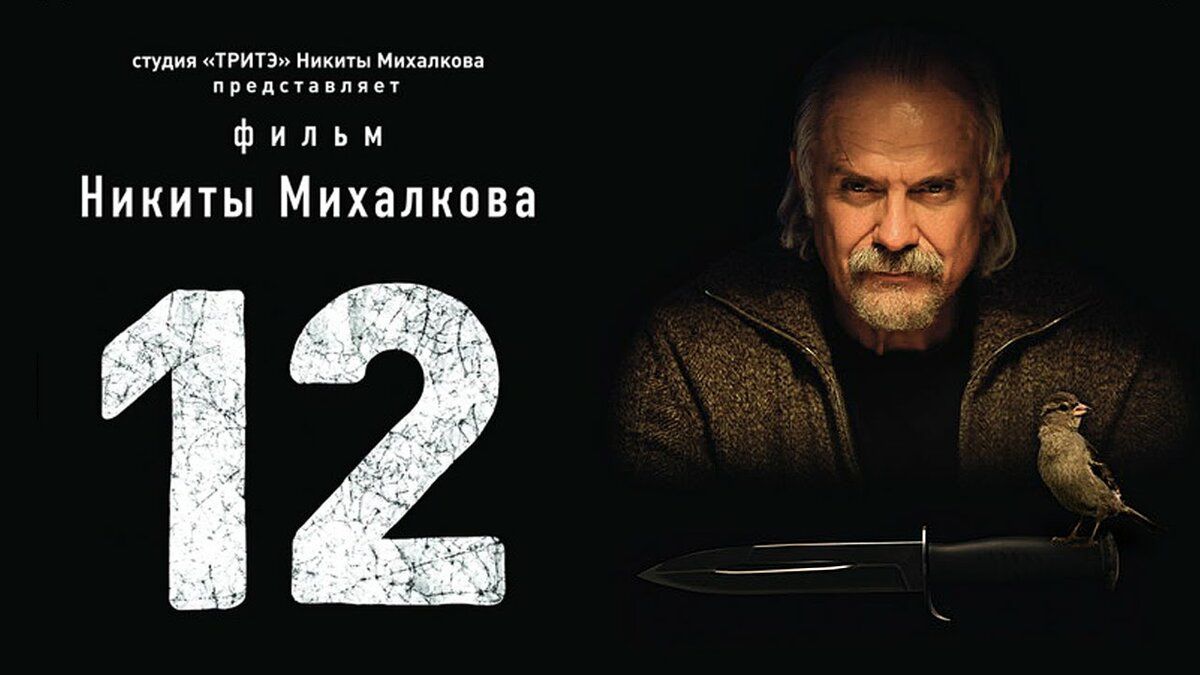 At the end Nikita Mikhalkov could not stand it:

"I won't star you in any film, you drunk face."

And he heard from Mikhail Yefremov very offensive:

"How many years do you have left? Five? I'll wait five."

Since then, Mikhalkov and Yefremov have not been communicating, and the party at Mikhalkov's country house was back in 2007.

It is correct to say: "Birds of a feather flock together." But the Kremlin does not want to see such "birds" for some reason.