Shishkarev will play with Kiriyenko in the "monopoly"?

A successful "privatizer" Shishkarev wants to "crush" half of container traffic in the Russian Federation? Is that why he was "allowed" to buy back a stake in Transcontainer, leaving Abramovich with his nose?

According to the correspondent of The Moscow Post, the Delo group of companies odious businessman Sergei Shishkarev plans to occupy 50% in the markets for railway operations in the container segment and transshipment of containers in seaports. This is stated in the new strategy of the company, which clearly rose not without the participation of the people of Sergei Kiriyenko. After all, Shishkarev owns only 70% of the company, another 30% - for Rosatom.

In 2019, Delo Group of Companies became the lucky owner of one of the largest assets in the railway market, Transcontainer. Then Shishkarev had to go bankrupt by 60 billion rubles, and at the auction he beat extremely serious competitors - Yenisei Capital Roman Abramovich and VTB Bank.

Now it becomes clear that Sergey Kiriyenko could be behind these plans - then the victory of Delo Group of Companies turned out to be very unexpected. And the goal, as one can draw a conclusion from the strategy, is monopolization of up to half of the market for railway operations and transshipment in ports. Only now the company is mainly private - and where the money will go is an open question.

Thus, all tenders could be an "agreement" with a pre-negotiated result. If in the Kiriyenko case, then it is not surprising that Abramovich retreated. In addition, Rosatom, which is believed to be patronized by the first deputy head of the Presidential Administration, Sergey Kiriyenko, did not pay for the deal at all. Atomenergoprom, a subsidiary of the state corporation, received 30% after an additional issue of the shares of Delo Group of Companies after the purchase of the package.

The transaction for the sale of Transcontainer shares was initially controlled by the state. Abramovich's Yenisei Capital owned 25.1% shares, VTB -24.5% of the shares. At the same time, the oligarch's company had a forward contract with the bank for this share, which meant that VTB could not accept the offer without the consent of Yenisei Capital.

It is also worth recalling that in 2018 Delo Group of Companies Sergey Shishkarev completed the purchase of 30.75% of the Global Ports port holding from N-Trans Nikita Mishin, Konstantin Nikolaev and Andrei Filatov for about $250 million. Shishkarev was previously the owner of stevedore assets.

Shishkarev's appetites grow year on year. In 2015, he bought from his nephew Timofey Calf 10% of the Cypriot DeloPorts (Deloports), became the sole owner of the company. In 2017, Delo bought 30.75% of the leading container stevedore operator in Russia, Global Ports, which was managed by five container terminals in the North-West and Far East of the Russian Federation.

That is, in parallel with the state, a whole railway empire of Mr. Shishkarev is being built, which is directly connected to the ports, and now it can get up to half of the railway operating market. And why was it necessary to sell the shares of Delo Group of Companies of the oligarch, if only the officials who are probably behind Shishkarev did not want to get their hasheft from this?

It's just that no one would let him in there. Shishikarev will look after half of Russia's private rail transportation? And, sitting in a variety of bodies, no one has questions about the conflict of interest?

In addition to global interests in several markets at once, Sergey Shishkarev has long had the fame of a gas "privatizer." At the same time, according to evil languages, to strengthen his position in business, Mr. Shishkarev allegedly may not be disdained to sponsor politicians and officials close to him.

According to the authors of the Kompromat Group website, Shishkarev is allegedly associated with several foundations sponsoring the activities of politicians and activists throughout the country. He is the co-founder of the State Club personnel reserve preparation fund, which financed the Nashi movement. Shishkarev is also the founder of a certain Langsdorf Foundation, which was founded with him by United Russia and Oleg Zholobov.

As you know, such personnel clubs and manual social movements are a real horse of Sergei Vladilenovich and devices close to him in the Presidential Administration. It may well be that in this way Kiriyenko acts with strangers' hands where he is uncomfortable to shine himself.

As you know, Sergey Shishkarev is a deputy of 3, 4 and 5 convocations of the State Duma. In the past, he actively established business ties with the help of sports. In 2003, together with his colleagues in the State Duma, he founded a football club for parliamentarians. His teammate was the scandalous Alexander Zhukov, who later became president of the Russian Olympic Committee.

In June 2004, Zhukov was elected chairman of the board of directors of Russian Railways and worked in this position until 2011. In this post, he also considered the concept of creating the Transcontainer. Shishkarev himself should also not be very far from Russian Railways.

According to the authors of the Broom website, allegedly ties with Russian Railways are long-standing and at least family. Among the places in which he lived at different times, allegedly there is an apartment at 11 Milyutinsky Lane, and an apartment in a house on Novgorod Street. Together with him, Elena Shishkareva was registered there. Her alleged father, Alexander Shatov, worked at Russian Railways.

Later, the apartment on Svoboda Street became the property of Alexander Godovikov - in 2006, according to industry sites, he was deputy head of the Department of Commercial Work in the field of freight transportation of Russian Railways. In 2014, Godovikov worked as deputy head of the Unified Consolidation Center of CJSC Industry Center for the Introduction of New Technology and Technologies (CCE).

The latter is known as a company that for many years received contracts from Russian Railways on a non-alternative basis at most likely inflated prices. In 2018, the FAS found this company guilty of violating antitrust laws. You can get acquainted with the FAS decision here.

Previously, half of the CCE belonged to Russian Railways. Now 49% for Zheldorconsulting LLC, which may be not far from Mr. Shishkarev and his Dela. Zheldorconsulting LLC is distributed in three offshore companies from Cyprus and the Virgin Islands Zinagori Limited, Cinerjee East Corp and Voltaro Trading Limited.

It turns out strangely - the company has contracts from government agencies for 10 billion rubles. Russian Railways, which is the main customer of the company, is this not to bother at all? If we assume that Shishkarev is behind the structure, then together with the CCE and Zheldorconsulting, a whole system is being built in which funds can go to offshore units associated with the oligarch almost uncontrollably. Or will Sergey Vladilenovich look? 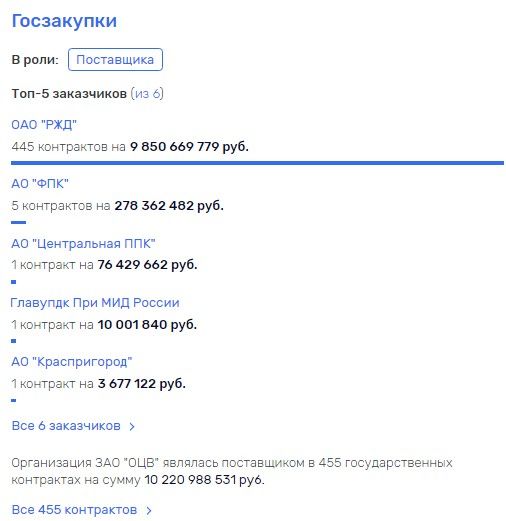 All this leads to serious doubts whether Mr. Shishkarev is going to win 50% of the market in an honest way, or is counting on the help of the state monopoly of Russian Railways and Rosatom, which is interested in the project with an eye to the development of the Arctic. In this case, fair competition can not be remembered, and the picture with the "suddenly" winning Delo Group of Companies at the auction for Transcontainer is no longer surprising. The downside will be, as always, a business that does not have bandages, because any monopoly leads not only to the crowding out of the market of smaller structures, but also to a serious increase in prices.