State Duma Deputy Alexander Petrov "gets" money at the expense of medical supplies from COVID-19, the effectiveness of which has not been proven. Governor Yevgeny Kuyvashev helps him to promote this story. Have the old friends found a new "gold mine"?

According to the correspondent of The Moscow Post, the Medsintez plant has started developing its own COVID-19 vaccine. Now work on the Ural vaccine is in the laboratory stage. State Duma Deputy and member of the Committee on Health Protection Alexander Petrov continues to "make a profit" on the pandemic, don’t they?

The Medsintez plant is located in the closed city of Novouralsk, the Sverdlovsk region, and has been operating since 2003. The enterprise is connected with the parliamentarian Alexander Petrov - the founders of the company are his sons Denis and Alexander (the latter - through Investfarmgrupp LLC).

Medsintez adapted its work to the COVID-19 pandemic surprisingly quickly. According to the official website of the company, in 2014 it received a registration certificate for the production of a new antiviral medicine named Triazavirin. In May 2020, this medicine was included in the guidelines for the treatment of a new coronavirus infection. In April of this year, the plant also launched the production of protective masks.  In June, Medsintez was included in the list of strategic enterprises in Russia.

However, there are a lot of disputes about the effectiveness of Triazavirin in the expert community. As was written in Vecherniy Krasnoturinsk, according to international standards, its effectiveness has not been proven either for prevention against COVID-19, or against any other diseases.

Governor of the Sverdlovsk region Yevgeny Kuyvashev wrote about the fact that there is no proven effectiveness of the medicine against COVID-19. However, this did not prevent him from writing a whole laudatory post on Instagram with photos of packages of the product. What's wrong with advertising, like regular bloggers? 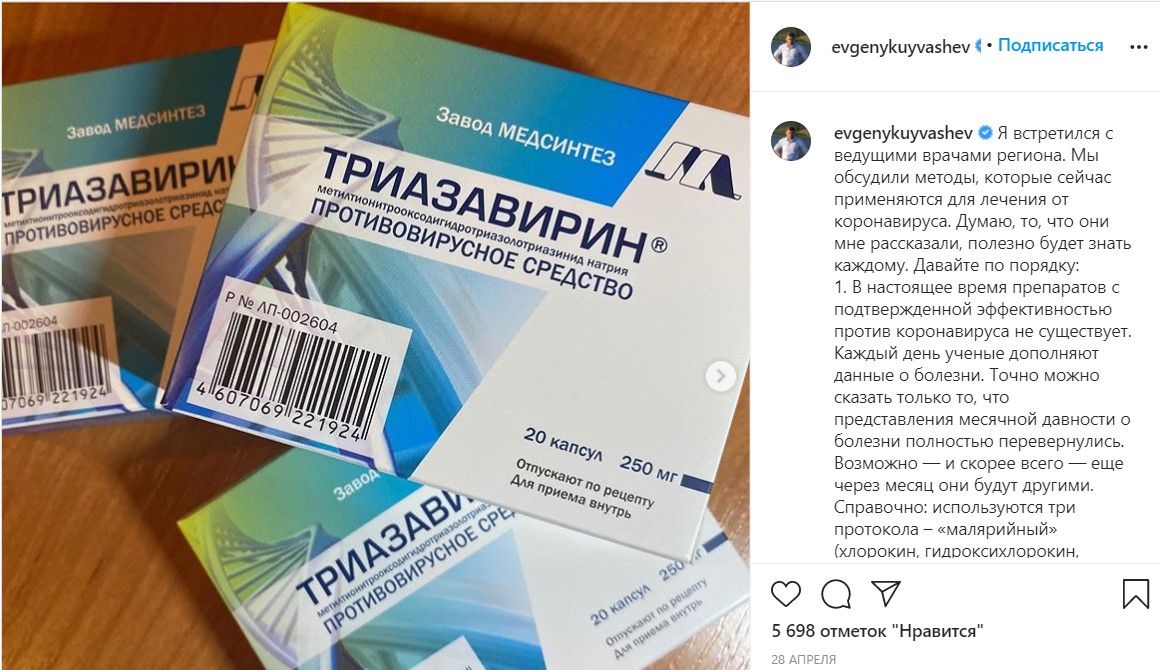 At the same time, according to Novaya Gazeta, a total of 21 million rubles were spent on public procurement of Triazavirin between the beginning of the pandemic and September 2020. And this is for a medicine with no proven effectiveness!

Is it possible that Mr. Kuyvashev is lobbying for the interests of his friends? Can it be assumed that soon his social networks will be flooded with photos of the new Ural vaccine? The Petrovs are not ordinary, they have been working in the region for a long time, so they may  have the necessary acquaintances.

Medsintez has long been firmly "sitting" on state contracts - according to Rusprofile, it has contracts for more than 2 billion rubles. 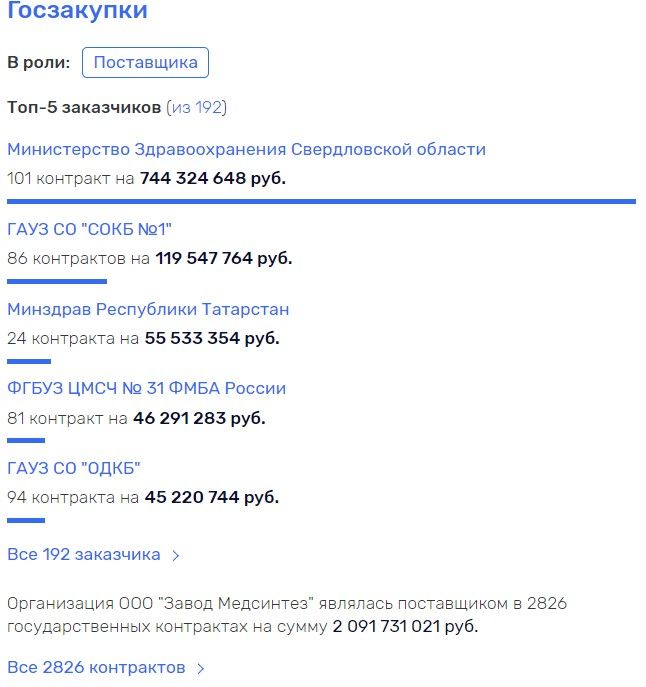 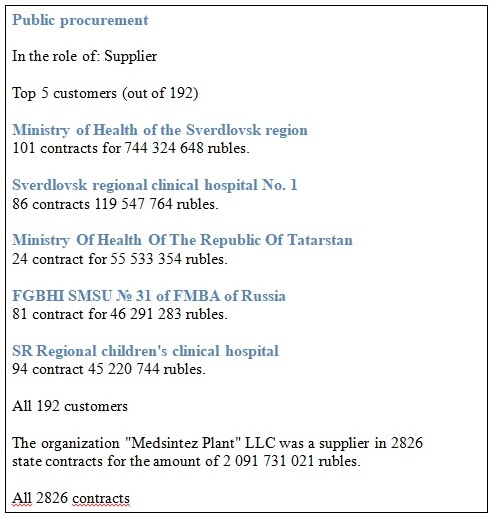 Presumably, the father of its two owners contributes to such success of the company. Previously, Alexander Petrov Sr. was on the Board of Directors of the plant, but in 2011 he went into politics. Since 2016, he has been a member of the State Duma Committee on Health Protection, that is, he is directly involved in the medical field. There seems to be a conflict of interest…

Moreover, as reported by Vechirtniy Krasnoturinsk, the social networks of the operational headquarters of the Sverdlovsk region directly wrote that the project for the production of protective masks at Medsintez was implemented with the assistance of Deputy Petrov! That is, in fact, no one even tries to hide his personal interest in this issue. It is curious, will the "penny" from a successful enterprise go to Kuyvashev himself?

During the pandemic, Medsintez has made an unprecedented leap: before that, business at the company was not very successful. As written by IA Nakanune, in 2008, they launched the creation of Russian-made insulin. There was a lot of noise about this - allegedly, import substitution, high technologies, and finally the country was getting off the "Western needle". Against this background, there were even negotiations with Rusnano on financing a project to produce a nanoliposomal form of antitumor medicine, as Kommersant wrote.

But very quickly there were conversations that Russian insulin is not very high-quality. According to FederalPress, patients with diabetes complained that they did not feel the positive effect after using the medicine. The Sverdlovsk Ministry of Health hastened to explain that the individual characteristics of an organism could be the reason of this.

In 2016, the FSS became interested in this insulin. As reported by PravdaUrFo, operatives began checking the work of Medsintez for compliance with the law in several directions at once. In particular, there were doubts about the quality of the company's insulin molecule. The company was also suspected of possible involvement in the smuggling of medical materials of dubious quality with their further use in the production of insulin. There was a version that the main source of contraband supplies passed through Kazakhstan. Does this mean that Mr. Petrov has "connections" with foreigners?

By the way, now he is honorary Consul of Slovakia in Yekaterinburg and often visits this country. May the money earned on Russian patients be eventually "leaked" to this Republic?

It is known that at one time the work of the plant was helped by... Chancellor of Germany Gerhard Schröder! According to FederalPress, his friendship with the then Governor of the Sverdlovsk region Eduard Rossel contributed to the signing of a contract for the supply of equipment between German Bosch and Medsintez. The money for the deal was allocated by Viktor Vekselberg.

By the way, the development of Triazaverin was funded by Medvedev’s Skolkovo Foundation, which is headed by Viktor Vekselberg. As reported by RBC, the Ural centre for biopharmaceutical technologies created for this project under the leadership of Alexander Petrov was one of the first residents of Skolkovo and received a grant of 369.7 million rubles, another 196.8 million was allocated by an investor whose data is not disclosed. I suppose the friendship with him stretches through the years?

It is obvious that a simple entrepreneur could not have access to such influential characters. Actually, Petrov was not like that - as RBC writes, since the beginning of the 90s, he collaborated with state security agencies. And before that, he worked as an ordinary teacher!

We already know where Alexander Petrov sailed, - now he is a successful Deputy in the State Duma and, it seems, and gets a lot of millions from his sons' business. The latter, apparently, had an attack of greed - realizing how much it can be earned on medicine from COVID-19, they decided to release a vaccine in addition to the medicine with questionable effectiveness. But does anyone care about its usefulness in treating the virus, or is the main thing in this story - the benefit for the wallet?