On the historical pavilion at the Patriarch's Ponds "building wars" are happening. Here, the "Kiev Square" of Nisanov and Zarakh Iliev wants to open a restaurant. Did no one ask the townspeople again?

As the correspondent of The Moscow Post reports, in the building of the pavilion on the Patriarch's Ponds, where the Kievskaya Ploshchad company plans to build a restaurant, construction work has begun.

With a request to protect the historical appearance of Moscow, local residents turn to Mayor Sergei Sobyanin. Svetlana Bondarchuk, TV presenter and model, did the same, noting the mayor in her Instagram.

Should God Nisanov and Zarakh Iliev not isolate themselves from this scandal?

While Moscow is emptying and quarantining, some builders are just starting their work. Last year, the “Pavilion” on the Patriarchs' entered the portfolio of assets of the Kiev Square Group of Companies, as stated on the official website of the Civil Code.

This week a fence suddenly grew around the famous pavilion on the Patriarch's Ponds. The locals are outraged - the historic monuments may be damaged, but, as always, no one seemed to ask.

In the morning of March 25th a group of security guards approached the building. Soon after, the pavilion was surrounded with a  fence. Svetlana Bondarchuk published a video message on Instagram about the subject where she noted the mayor of Moscow.

Activists of the Patriarchs initially tried to block the road with a truck filled with concrete blocks, but the cordon was eventually broken. As the locals say, part of the lawn is now “captured”, while the entire pond and square with the pavilion is a single object of cultural heritage. According to activists, the owners of the pavilion did not give approval for work issued by the Joint Administrative and Technical Inspection (OATI) of Moscow. There is also no approval for the reconstruction of the building from the departments of nature management and cultural heritage.

It is curious why the pavilion generally even went to Nisanov. As M24 wrote, they tried to sell it for more than 660 million, while the cadastral value of the pavilion was 23.7 million. However,  why could Nisanov just “grab” the building without even buying it? Indeed, according to the register ERGUL, the pavilion is generally leased, and it was established a restriction of rights and encumbrance all the way up until March of 2062.

The restriction and encumbrance is attributed to the benefit of Patriarshie LLC, where a limited liability company FEROMIVIA HOLDINGS LTD as the founders. That is, the historic building is in the hands of some offshore and it is possible that Nisanov is the face behind him. Now he is in full swing with activities at the facility.

The businessman decided to "thank" the premise just so that later he could sell something for more expensive than what was initially free? 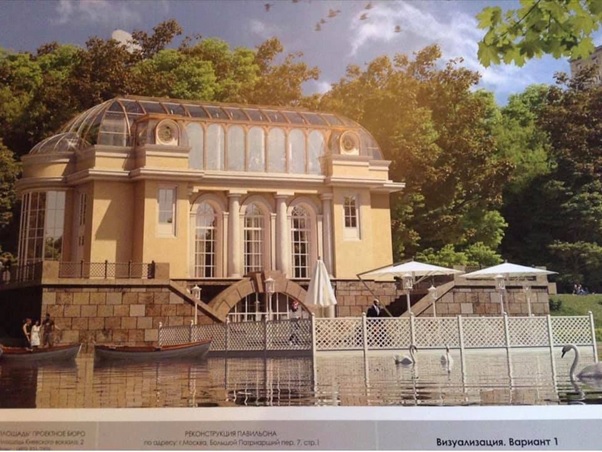 The owner of the premise assured: the project will not distort the location’s appearance. However, according to the sketches that leaked to the Network about a year ago we can obviously conclude that the appearance of the pavilion will still change. It is also worth considering who took up the construction. There are suspicions that the time was not chosen by chance - and suspiciously during the announced measures for the prevention of coronavirus, people cannot get together, and in general, attention is focused on a problem of a completely different nature. Did Nisanov and Iliev take advantage of the situation and "process" the "historical monument"?

God Nisanov and Zarah Iliev are the two largest owners of commercial real estate (according to Forbes). These people control other important sectors of the consumer goods market - glamorous shopping facilities (for example, the Evropeisky shopping center) and the direct heritage of the Luzhniki and Cherkizon eras - the Moscow shopping center (Lyublino), Sadovod shopping center and Food City ."

The concern of Moscow citizens can be understood - the "kings of real estate", reaching out to the pavilion, have been repeatedly noted in serious scandals. Both God Nisanov and Zarakh Iliev were able to get away with everything.

Recall, for example, the hotel "Ukraine". During the reconstruction of the skyscraper, a collapse occurred on one of the towers. Spiteful critics hoped that the authorities would take away the historical building from him, but this did not happen. What if the same incident happens with the building on the Patriarchs?

Powerful scandals were accompanied by the construction of the shopping center "Europeisky". A square was cut down for the construction site, the complex itself was in the water protection zone near the channel of the Moscow river, the underground parking lot of the complex was erected in a dangerous area near the subway tunnels. Moreover, the scandalous builders simply did not let anyone into the territory.

The Prosecutor General’s Office and the Ministry of Natural Resources of the Russian Federation received statements regarding the threat of collapse of the arch on the Kievskaya metro station as a result of the construction of Nisanov and Iliev. It was reported that the conclusion of the state environmental review issued by Kiyevskaya Ploshchad CJSC did not meet the established standards, and the FSB department sent a letter to the Moscow prosecutor's office saying that the construction of the shopping center could lead to a man-made disaster, this was written by “Regnum”. As a result of long and tiring negotiations, the owners of the shopping center were forced to agree with the requirements of state representatives.

And again, like always,  the negligent businessmen were forgiven. The same men are still given "tidbits" of land and important locations and premises. For example, last year,the  businessmen in the near Moscow region acquired the elite residence of Ilyichevo, which belonged to the city. Among the owners of the premise until 1917 was the Romanov family, and during the Soviet era, high-ranking party workers lived in the estate. Now, it is one of the most expensive venues outside the capital due to the proximity to the presidential residence of Novo-Ogaryovo. Not a bad jackpot they ripped off!

The financial indicators of some companies do not look “royal” at all - numerous losses may indicate a possible withdrawal of money. For example, in 2018, Kievskaya Ploshchad LLC had minus 4.7 mln profit with a revenue of 108 mln. Hotel-Invest LLC did not even come out with a plus since 2013. In 2018, the loss reached 168 million rubles with 462 million raised. Imperial 2000 has a loss of 5.1 million. So these men can selfishly take over elite projects and land while unfairly launder money in their pocket?

This year, the construction of a new food and beverage center Food City-2 will begin in Khimki. Judging by the name, it can become a carbon copy of Food City, a shopping complex that was opened in 2014 on Kaluga Highway at the other end of Moscow, by the same Nisanov and Iliev. But, it is not clear what this new plan promises to local authorities and residents - uninterrupted supply of food or a new problem point on the map of the capital.

Also, last year, residents of the village of Nikolo-Khovanskoye, Spanish Quarters, Nikolin Park, Solovinaya Roscha and other nearby settlements of the Sosenskoye  began to complain that chemical waste and sewage from sewers were constantly drained into Khovansk ponds: in particular, sewage that came from the Food City commodity and vegetable base, hundreds and thousands of liters of slop, toxic chemical waste clog a pond. A petition has even appeared on the web in which citizens asked to "stop the ecological disaster."

These are not the only issues stemming from Food City. Last year, the police and some Russian Guard came crashing into the largest Moscow markets. As “Vedomosti” wrote , security officials visited Nisanov’s “Sadovod”, Moscow and Food City, the problem areas with a lot of gray segments. They became pioneers and leaders of the cryptocurrency market. The maximum cryptocurrency can be estimated at 600 billion rubles per month. As a result, an unaccounted sum of 2 billion rubles was discovered, wrote FederalPress .

In addition, illegal exchangers thrive on the markets of Nisanov and Iliev, some of them work under the signs of operating cash desks and banks. However, the statistics that these points submit to the Central Bank do not coincide with the Bank of Russia’s own estimates. So, even the head, Elvira Nabiullina pointed to the illegal mechanism that most tenants of the Moscow markets "Sadovod", "Moscow" and "Food City" use to evade taxes, Interfax wrote.

Can it be, that after a series of claims, proven violations and multiple scandals, the businessman gets no punishments? Even being in contact with them can be simply dangerous. There were times when these gentlemen ran the solid part of the Cherkizovsky market, where even then, unwanted people often disappeared without a trace.

For example, in 2014, businessman Dmitry Shumkov purchased a mansion on Varvarka from the Sobyanin government for 3.4 billion rubles. The businessman decided to reconstruct it into a 5-star hotel and has even almost chosen the hotel operator. But, not surprisingly, six months later, Dmitry Shumkov suddenly died under mysterious circumstances in his private apartment.

Shumkov’s heirs Lyubov, Elena and Alexander, suddenly mysteriously decided to leave the ranks of being owners of their father’s founding - Multifunctional Complex Varvarka LLC. Can you guess who the asset fell into the hands of? You guessed it, God Nisanov and Zarakh Iliev. Although being a conspiracy  theory, such coincidences lead to certain thoughts.

It seems that Nisanov still deals  with his competitors to this day. For example, recently businessman Ilgar Hajiyev, for personal safety, was forced to leave for Germany. The assistants and relatives of God Nisanov “squeezed” his business from him, as a result of which thousands of equity holders and employees of firms that were left without means of subsistence suffered. Hajiyed himself spoke about this in an interview with The Moscow Post .

Rumors have generally associated the "entry" of scandalous businessmen into the markets with irreconcilable wars in the spirit of the "dashing 90s". Allegedly, Nisanov established his influence due to the fact that he was able to "lure" to himself near-criminal characters.

Be that as it may, business methods always raise a lot of questions. Suspicion creeps in that nothing will stop Nisanov and Iliev - not the "living chains" of the activists, nor the appeal to Sobyanin or the outrage of "celebrities."