Dmitry Doev, a former top manager of Gazprom, decided to take up the Kyuchus field, which has lit up in history with the deliberate bankruptcy of state assets.

According to the correspondent of The Moscow Post, a new player was drawn at the auction for the Kyuchus gold deposit, which is one of the largest in the unallocated fund. Rostec plans to take part in the competition in a joint venture with Seligdar and the former head of Gazprom Tsentrremont, and now - the head of VIS JSC Dmitry Doev.

RT-Business Development, controlled by Rostec, received 33.3% of White Gold. The remaining 66.7% of this company is held by Gold Asset Management, 51% of which is held by the Seligdar gold mining company, and another 49% by Dmitry Doev.

Let's start with the fact that the Kyuchus field itself caused a wide discussion - on the one hand, due to the demand among market players (Polymetal, Polyus, the possible joint venture GV Gold and the uranium holding Atomredmetzoloto (ARMZ), Highland Gold Vladislav Sviblov, Atom Gold showed interest On the other hand, due to the environmental side of the project, which has already caused discontent from activists.

The fact is that the winner of the bidding will be obliged to conclude an agreement with Rosatom for the installation of a small nuclear power plant and use its electricity no later than June 30, 2028. The problem is that the state corporation plans to store radioactive waste at the station's industrial site, which is prohibited by regional laws. However, dissatisfaction was ignored, the project was approved, and even jobs at the still defunct plant have already been allocated.

Earlier, The Moscow Post suggested that Rostec would also connect to the field. This version was confirmed, but the partners of the state corporation exceeded expectations - Seligdar Sergey Vasiliev and the odious former top manager of Gazprom Dmitry Doev make the situation around Kyuchus even sharper.

Mr. Doev had to cooperate with Sergei Vasiliev's Seligdar earlier. In particular, their names are recalled in the context of the sensational bankruptcy story of Energogaz, a "subsidiary" of Gazprom Tsentrremont, which played a leading role in the implementation of a large-scale project to expand the Puginsky PCG in the Khanty-Mansi Autonomous Okrug.

As a result, the implementation of the project turned into accusations of embezzlement and litigation. Bankruptcy was called intentional, and the first violin in it was played just by the beneficiaries of Seligdar Konstantin Beyrit, Sergey Vasiliev and the then head of Gazprom Centrremont Dmitry Doev.

How Energogaz generally became a sub-contractor of the Punginsky PCG expansion project is an interesting question, because the company had neither experience, nor qualified personnel, nor equipment. Therefore, in 2014, another agreement was concluded for the same work - this time between Energogaz and Ugorskremstroygaz. The latter is a subsidiary of the same Gazprom Centrremont LLC under the leadership of the same Doev.

Thus, a "scapegoat" appeared in the story, on which it was possible to write off the blame for any negative consequences, without drawing attention to the customer - Gazprom Tsentrremont. The result for Ugorskremstroygaz and Energogaz was expected: it was decided to get rid of them.

A bankruptcy lawsuit was filed by Moscow Megabild LLC, which received the right to claim debt in the amount of 100 million rubles under a cession agreement with us, Antares LLC. Until August 2017, the founders of Megabild included the capital's Maximus LLC, co-founder of Seligdar PJSC.

Among the co-owners of Maximus are the names of Sergei Vasiliev and Konstantin Beirit, already known to us. 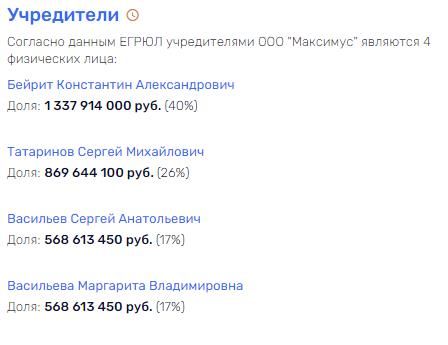 The participants of Antares LLC until the spring of 2019, by the way, were the same Konstantin Beyrit and Sergey Vasiliev.

Already in March 2021, with millions of losses, the company was liquidated. Megabild LLC suffered the same fate, whose losses in 2020 amounted to 75 million. And nobody was embarrassed?

Such connections are interesting in the light of the voiced statements of creditors about the deliberate bankruptcy of the structure. Moreover, Gazprom Tsentrremont, headed by Dmitry Doev, also played a role in this. For example, he achieved the inclusion in the register of creditors of the Energogaz enterprise of debt in the amount of 1.2 billion rubles. Billions of dollars were also claimed by other Gazprom entities.

Creditors managed to challenge part of the transactions. Now they are also trying to bring Gazprom Tsentrremont to subsidiary liability for Energogaz's debts - the latter has surfaced hundreds of millions of debts to the Federal Tax Service. Moreover, creditors insist that the ex-director of Energogaz and Dmitry Doev be involved as co-defendants. 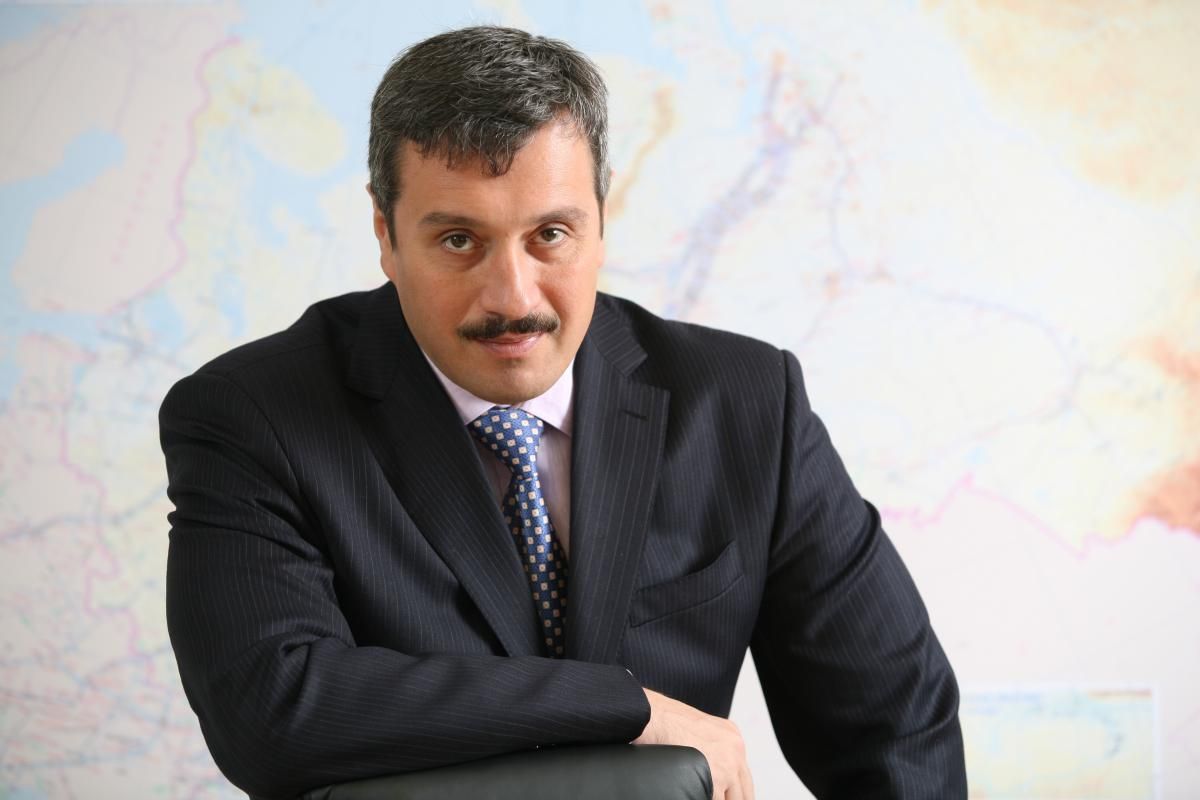 Will Doev overtake the echo of the past?

Given that the final point has not yet been set in the bankruptcy case of Energogaz, now Doev's plans to master the gold industry can go ashes. He faces the prospect of being brought to subsidiary liability for multimillion-dollar debts of a bankrupt enterprise.

Before the noble service in the gas monopoly, Doev was a member of the management of Sevzapinvestprombank - he was one of its founders, but in 2008 he left the shareholders. But leaving the financial institution did not mean breaking partnerships with colleagues. So, the owner of the VIS group Igor Snegurov to this day holds a stake in a bank of more than 15%. There, apparently, the tearful cooperation between Doev and Snegurov begins.

It is difficult to believe, but the structure of Snegurov turned into one of Gazprom's largest contractors, where Doev moved after working in the bank. The company also formed the largest portfolio of public-private partnership projects in Russia, Taiga.Info wrote.

VIS conducted development in Sochi before the Olympics, built capital facilities in the Yamalo-Nenets Autonomous Okrug and claims the fourth bridge over the Ob in Novosibirsk. 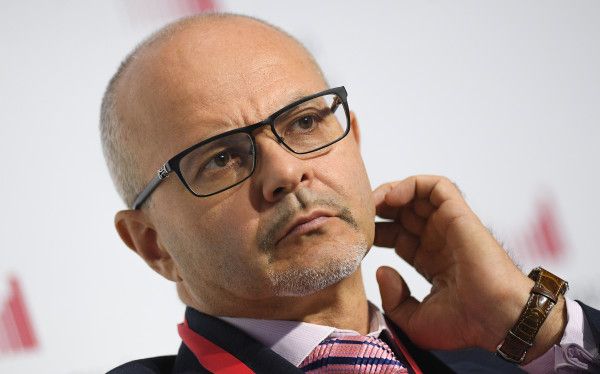 Igor Snegurov made VIS the "favorite wife" of a gas monopolist

The cooperation ended with the fact that Gazprom's daughter and VIS made claims to each other. The parties accused each other of not fulfilling their previous obligations. In 2017, Snegurov's structures withdrew from the project and filed a lawsuit against Gazprom for 8.2 billion rubles. Having won this case, the company filed another lawsuit for 568 million rubles. That's how VIS again managed to earn money on the state corporation.

In 2004, Doev was in the chair of the CEO of VIS for several months. Moreover, according to Rusprofail, literally recently - September 17, 2021 - Doev was appointed head of VIS JSC. Thus, we see how the fate of a commercial company and Gazprom are closely intertwined.

And Doev is not the only one who found himself in Snegurov's business. In the same striking way are the former "Gazpromovites."

At the head of the PF "VIS" at one time sat Sergey Palkin. From 2008 to 2010, he led the Moscow LLC Gazenergoservice Complete. The company belongs to Gazenergoservice OJSC, whose board of directors included his father, Sergey Valentinovich. The elder Palkin was once also listed as the first deputy general director of the Gazprom structure - Tsentrenergogaz JSC.

The general director of PF VIS also managed to work Yuri Raushkin, who had previously worked in senior positions in Gazprom's subsidiaries for more than 15 years. With the arrival of Raushkin, it became known that the VIS Group will become an investor in the construction of the Vinogradovo-Boltino-Tarasovka toll road in the Moscow Region. As Vedomosti wrote, it was assumed that the capital of Fourth Concession Company LLC VIS will own 90%, and another 10% will belong to Gazprombank, which will credit the project.

At the same time, at Gazprom, Raushkin managed to inherit. As Versiya wrote, the Investigative Committee (IC) of the Ministry of Internal Affairs of the Russian Federation revealed embezzlement during the supply of products by the structures of Gazavtomatika OJSC, which at that time was headed by a subordinate of Doeva. Then, in 2010, a criminal case was even opened on the fact of fraud on an especially large scale. According to the investigation, when acquiring power equipment, extra intermediaries were specially built into the procurement chain. According to security officials, "a chain of eight to nine intermediaries worked - all these companies sold equipment to each other, as a result, the cost of goods that Gazprom paid for increased many times."

Has the case been continued? No. Moreover, Yuri Raushkin then not only remained in the same place, but also became part-time general director of the management company Elektrogaz, which controls the largest manufacturer of electrical equipment.

As we see, Doev does not remain in debt to his subordinates. Apparently, this is a valuable quality and allowed him to climb so high up the career ladder. Now the businessman decided to try himself in a new case and go to the gold miners and became one of the co-owners of two specialized companies at once - Yurskoy LLC and Gold Asset Management LLC. And the partners chose influential ones - Seligdar and Rostec.

By the way, Doev collaborates with Rostec as CEO of VIS. Together, companies are engaged in a project to build a crossing of the Lena River in Yakutia. In other words, bridges have already been established.

According to experts, the joint venture with Rostec increases the chances of Doev and Ko to win the auction for Kyuchus. Another question, of course, how the businessman will prove himself there - after all, given the rich track record of the former Gazprom, he is used to acting on a scale and openly. Moreover, the state budget usually suffers from such activities.