The cynical seizure of Ilgar Hajiyev's business by the scandalous capital's developer God Nisanov left hundreds of Russian families without apartments. This is the most important factor in this story of the raider seizure.

All this horror capturing Hajiyev's construction work very closely resembles the famous russian fairy tale about a fox and a rabbit: The hare had a polished wooden hut and the fox had an ice one. The fox asked to stay in the hare's hut, and then kicked him out of his own house! The fox being - Nisanov and the Hare - Hajiyev.

Plus, in this supposedly magnificent story, as the Moscow Post reporters found out, from the corners of the hut, long ears are sticking out of another scandalous character, Rustem Magdeev, the former advisor under the Tatarstan club. It was Mr.Magdeev who sold the land under the wooden hut.

God Semenovich Nisanov feels calm and confident, as his former partner is not just being fired at from slingshots, but is being shot at directly by guns, well, at least according to the fantastic pearls written on the pages of their publications. They released all the “dogs” on Ilgar Hajiyev.

For Ilgar Hajiyev, the most important goal is not so much to prove his innocence, but to do everything he can so that the residential quarters - and there are several of them - are completed! What else prevents the completion of the construction and why can't the keys be finally handed over to the people exhausted from endless waiting? This is what the Moscow Post correspondent is trying to figure out. 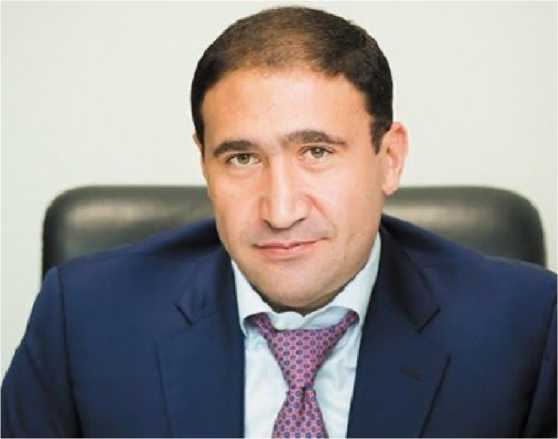 Fights over the elite living complex

It all started when Hajiyev's company, SDI Group, decided to build a 25-story business-class residential complex in the Western Administrative District of Moscow under the VernadSKY project.

According to Rosreestr, the “Ilion-Trade” company, which is associated with Nisanov, became the tenant of the land. The same company that controls the Moscow market in Lublino. However, Ilgar Hajiyev's company served as general contractor VernadSKY.

The initial investment in the construction of the complex is estimated at 5 billion rubles. The first sales were easy. A profit of $ 100 million has already appeared on the horizon.

"This is where the problems begin," says lawyer Damir Bashirov. - The developer suddenly decided to take full control of this promising project. Ilgar Hajiyev did not mind. However, of course, he was not enthusiastic about this offer. Therefore, he wanted the costs to be compensated. According to documents and payments, 359 million rubles were issued. However, Hajiyev's partners did not accept this amount.

And then it all started..... 21st of January 2019, the VernadSKY construction site was seized by private security company Vityaz. 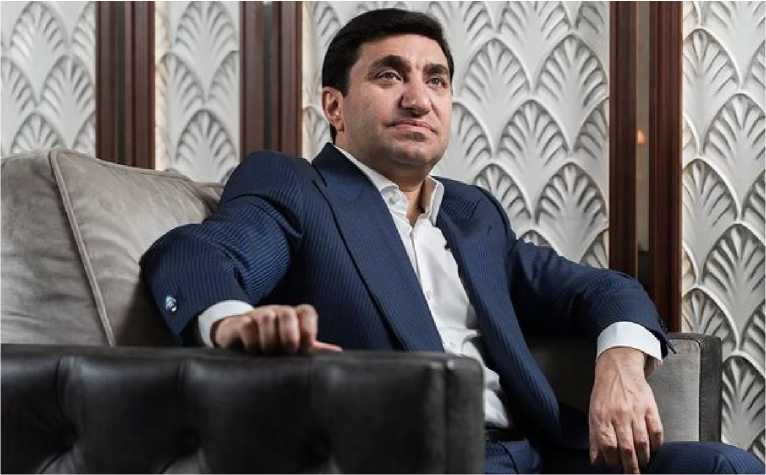 Ilgar Hajiyev recalls that in 2014 the businessman German Zakharyaev (the brother-in-law of Nisanov) and his brother Isai purchased equal shares for land development in Pirogovo village for $70 million. Zakharyaev brothers took a 50% stake in the co company “Comfort Invest”, created for this project. The brothers registered their shares as nominal owners.

The construction of the residential complex of “Comfort Class”'s Pirogovskaya Riviera was opened on the site. General contractor was the company Accord-Stroy, the developer of the SDI Group. 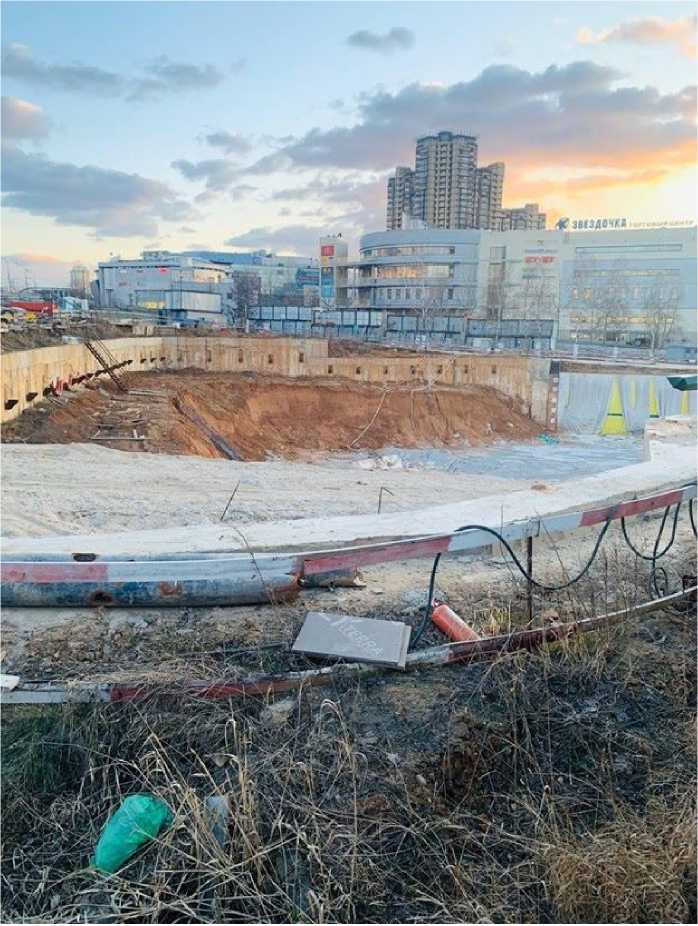 Will a residence be built in this place?

At the initial stage, Hajiyev managed all the work and supervised the construction site. “But at the end of 2014, the Zakharyaevs appointed their CEO and removed me from operational management,” Ilgar Hajiyev continues his story. - “When we did not meet the commissioning date of the first stage, I tried to return the project, but I was unable to do so. Therefore, I began negotiations with God Nisanov.”

What are the consequences? As a result, the share of Zakharyaevs had to be bought and Albert Imanilov had to become a partner. Imanilov Represents the interests of God Nisanov. 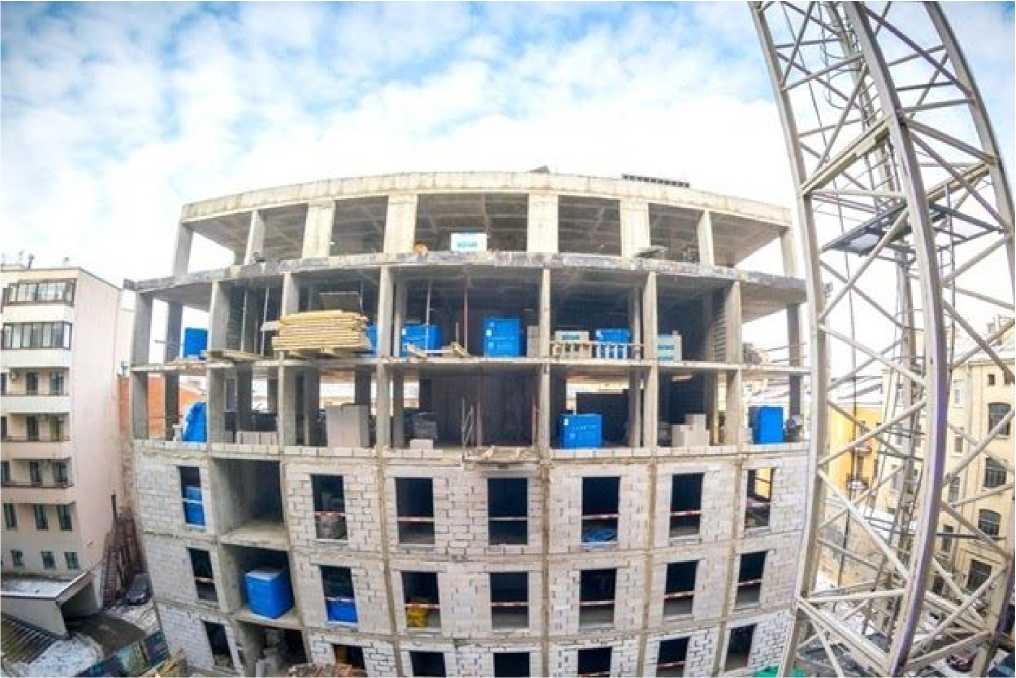 When can the construction be completed?

The change of partners was necessary to support Hajiyev's work, which could only be provided by a known businessman like Nisanov. After all, a significant amount of investment was made for construction ...
Building materials SDI Group:

More than 50 infrastructure facilities in Moscow and Moscow region.

Nisanov was taking 30% “I really sympathize with the people who invested in our facilities,” says Ilgar Hajiyev. "What are they suffering for? It was planned that about 10 thousand apartments in the complexes will be built, more than 3 thousand were sold, but only the first stage of the houses was commissioned. All social facilities are frozen, and people won't see the clinic very soon. Those who took credit for the apartments will have to show great interest in the bank for the housing they will get who knows when.” 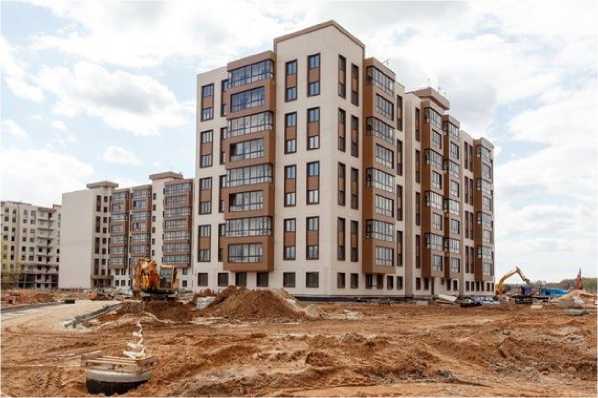 Pirogovskaya Riviera is also waiting for the return of the builders

"More than a thousand employees of the company have been unemployed," Ilgar Hajiyev continues. “In many families, they were the only breadwinners. These families are now lacking the materials needed to survive. Delays began in paying taxes, contracts with contractors and suppliers. 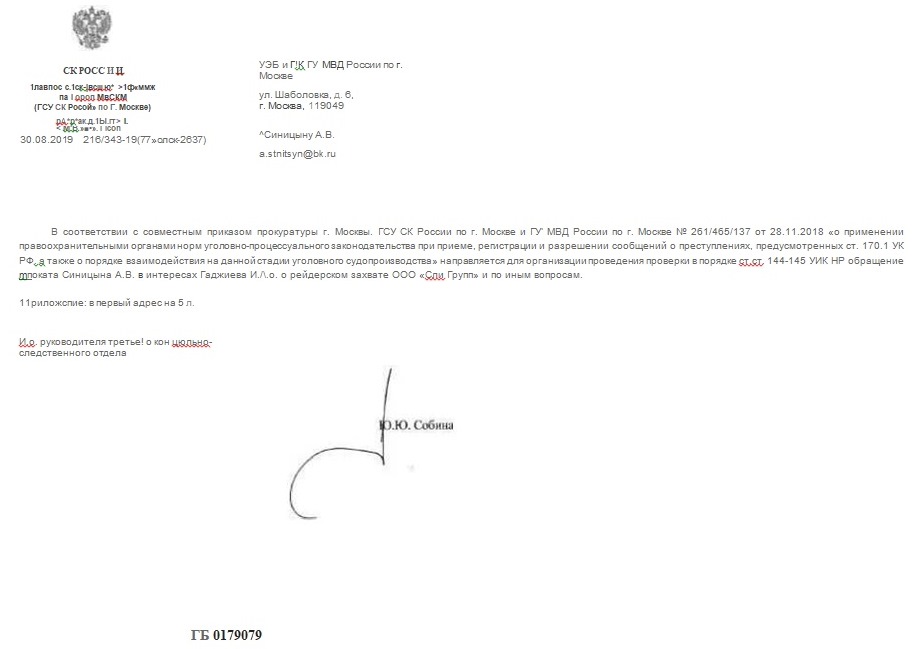 So, Ilgar Hajiyev, who since 1995 successfully built residential constructions in Azerbaijan, Kazakhstan, the businessman who built neighborhoods in Turkey, was caught in the threat of the realities of the construction business in Russia? “I didn't think there would be so many traps, underwater stones".

"I didn't think that the echoes of the 90s were still alive, I started my business in Russia in 2013, says the businessman.

Thus, the brother in law of God Nisanov, German Zakharyaev became Ilgar Hajiyev's partner. Hajiyev was immediately warned that 30% of the profit would be given to Nisanov.

Ilgar Hajiyev had to agree to such enslaving conditions. When the money started coming in, the appetite of God Nisanov grew even more.

“After the conflict, the construction sites froze, workers were not allowed to enter the Pirogovskaya Riviera residential complex area, and instead of investing in construction, the partners began to withdraw money from the company” said Ilgar Hajiyev. 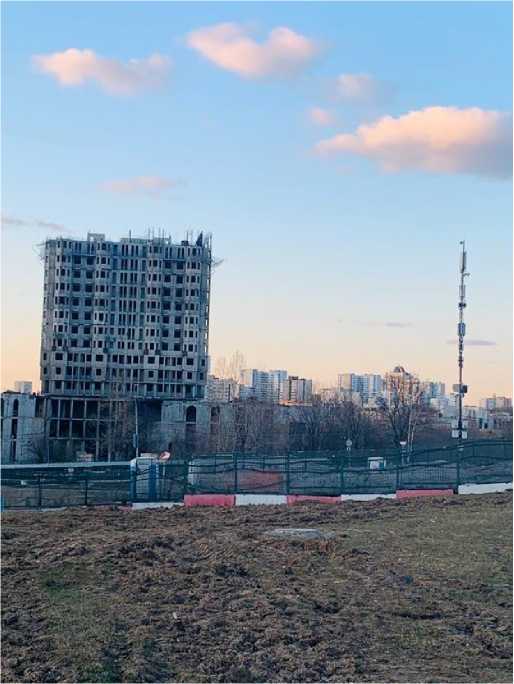 Since 2013, Hajiyev has invested about 2.5 billion rubles in the Russian economy. And besides fulfilling the profit sharing arrangements with God Nisanov, approximately 1.5 billion rubles were transferred from SDI Group structures to companies related to Nisanov.

Let's recall what the chairman of the Kievskaya Square company holds: This Grand furniture center, this Radisson Slavyanskaya hotel and Ukrainian hotel, as well as the owner of the piles of Moscow City and shopping centers and markets.

Also, recall that recently, President Vladimir Putin ordered government authorities to deal with problems of investors. But, what about the ugly situation invothe SDI Group?
It is clearly against the President's instructions.

Ilgar Hajiyev made a request to the President of the Russian Federation to help restore the company's working capacity and the possibility of completion of construction. Hajiyev's letter was published on the SDI group website.

The Businessman seeks support for families suffering from Nisanov's Raid.

- I tried to haggle with them for three months. The FSB threatened me through the police, thieves. They have no legal rights, but when they realized how much profit the VernadSKY project would make, they took over the company, and now they've got the Pirogova Riviera, ”says Ilgar Hajiyev.

On January 25, a new cynical takeover took place: this time they looked at the office of the company Hajiyev in Kutuzovsky Prospekt.

People entering the office asked them to follow the instructions of Flera Teplinskaya, who represented God Nisanov. The next day, Nisanov's cousin Vladislav Yusupov appeared in the office too.

He gathered the company's top executives and announced that he was the new owner. Yusupov asked them to give him flash drives and electronic bank keys.

What else is important? Threats began to come to Hajiev until physical retaliation after the SDI Group office was taken over from the representatives of Nisanov. 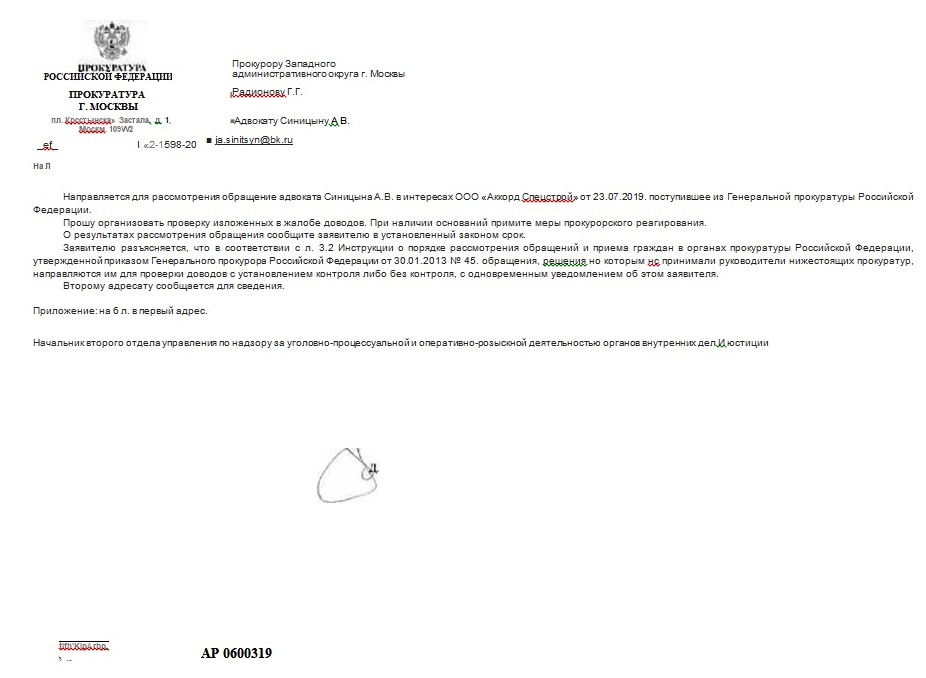 Police officers were present during the arrest but did not interfere.

Lawyer Damir Bashirov explains that the company's office is protected by a private security company, which has contracts with Hajiyev's company.

- So, our private security company doesn't allow us to our own office! We called the police three times, but the same outcome came every time, this is impossible. We told the police: We are renting an office, can we go inside so we can show a sublease agreement. We always have the right to refuse PSC services, and you will be asked to withdraw from our office as a police officer. However, police said that the PSC is legally on the premises.

Invest” in the northern part of the village of Pirogovo, with a total area of 49 hectares.

The regional planning project has designed two functional regions separated by Central street: residential and common areas. Social and cultural service objects and 20 residential buildings are provided in the residential area. In the common area - transport and engineering infrastructure facilities. The developers of “Comfort Invest” LLC are allowed to build 8 residences, a kindergarten for 225 children and engineering infrastructure facilities.

In 2017, the Moscow District Ministry of Construction Complex gave permits for the commissioning of 4 residential buildings.

Similar problems occurred in an intelligent quarter in the Odintsovo region, near Moscow.

In this residential complex, the construction of two and subsequent queues, including objects of the promised infrastructure, will not be carried out by the developer, and the 4 houses that are in operation are still open.

Even stockholders whose cases have already been submitted cannot show positive emotions.

They have to take their children to school and kindergarten a few kilometers from home every day.

However, the residents of the complex were promised a shopping and entertainment center with education and health services, cinemas, cafes and restaurants, but all this is only on paper.

Infrastructure construction on the Pirogov Riviera has also been suspended.

Scan an unauthorized rally of deceived stock holders: the house is ready, but they don't give the keys!

It should be noted that in April 2019, the Western Administrative District Directorate of Internal Affairs of the Ministry of Internal Affairs in Moscow also participated in the capture of the Hajiyev construction work when police officers arrived at the SDI Group office in Kutuzovsky Prospekt. They submitted an order signed by Chief colonel Igor Petukhov. 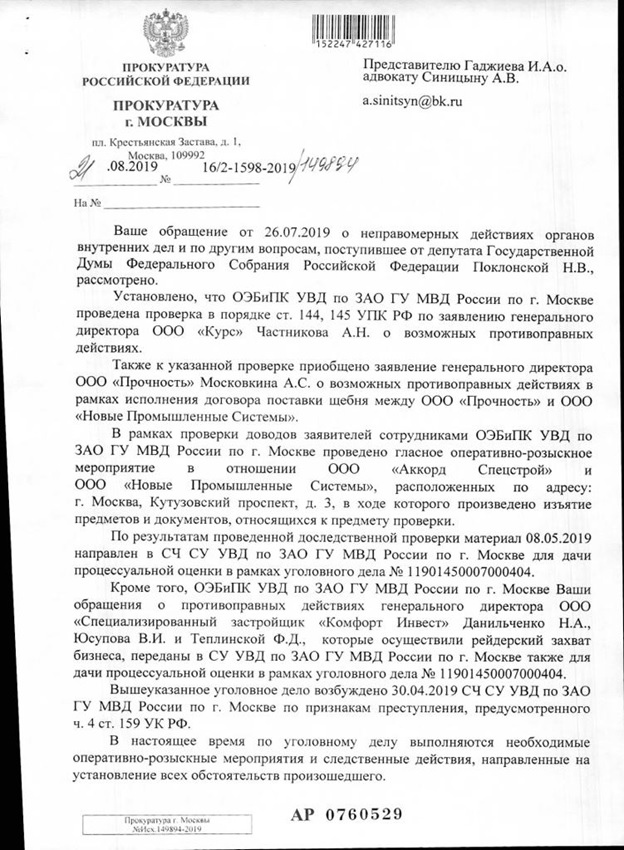 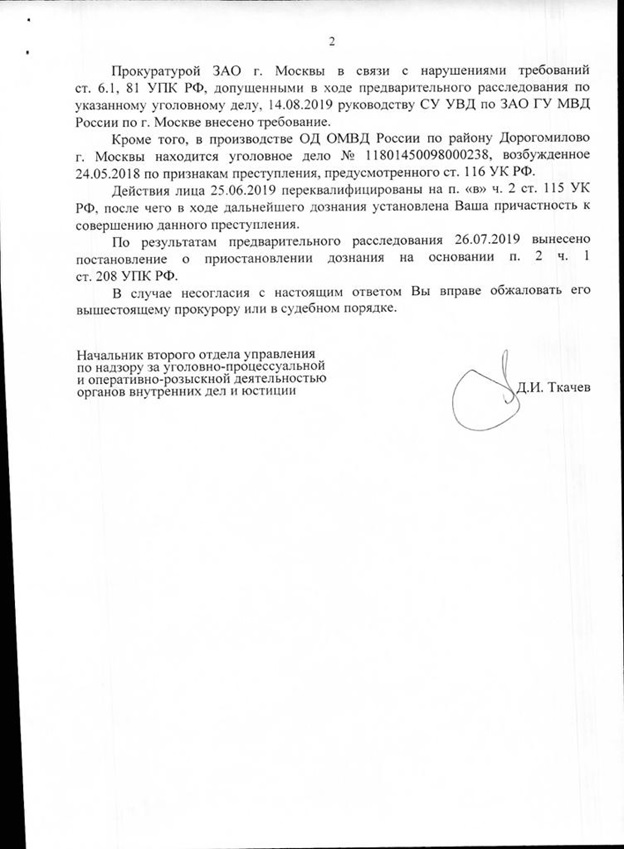 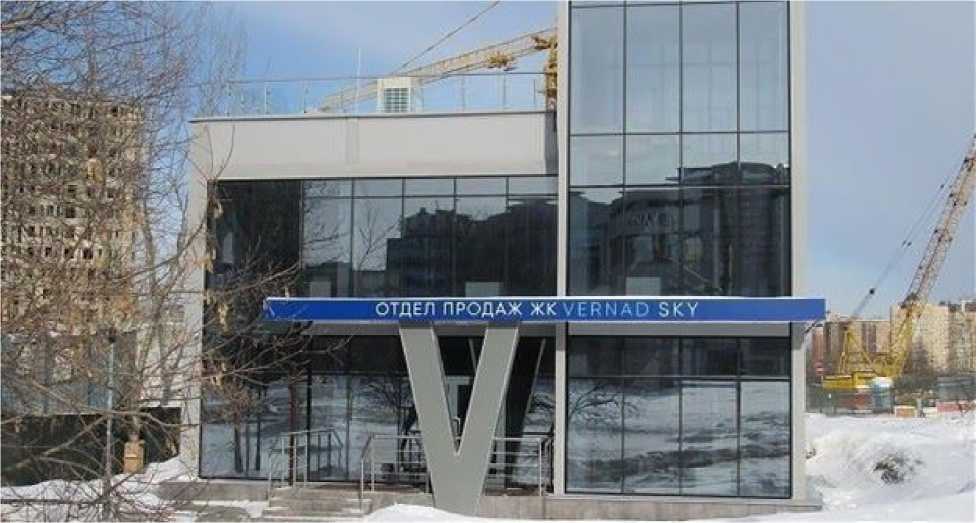 "I have sent dozens of appeals, applications and complaints, starting with the President of the Russian Federation, the prosecutor's office, the FSB, the Investigation Committee, the Ministry of the Interior," Ilgar Hajiyev said. - “I repeatedly wrote to all supervisors about the misfortune of their hundreds of unemployed and incompatible employees. I have been trying to get the truth in the state and judicial organs for about a year, but until now I have not been able to break through this wall.

That's why I organized the Center for Business Transparency and the Struggle Against Institutional Raids in Russia. Hopefully with the help of this center, I and the same victims can transfer reliable information to senior officials in the Russian Federation.” The press will be filed against those who bullied me in the press. First of all, it's about the editor-in-chief of the well-known journalist-compiler Oleg Lurie and Argumenty Cause Andrei Uglanov, who printed special-made materials.