The likely replacement of Gennady Zyuganov, Yuri Afonin, can fight, perhaps, for the remnants of administrative rent, but no longer for the sympathy of voters.

In the expert environment, they continue to discuss the resonant statement of the Chairman of the Central Committee of the Communist Party of the Russian Federation, the permanent leader of the party Gennady Zyuganov. Last week, he in his hearts accused the people of the collapse of the USSR. According to him, people needed to "defend their interests more painfully."

Political scientists are convinced that this is a voice of despair. The Communist Party is experiencing a severe crisis, including a leadership crisis. Zyuganov and key party "bonuses," being unable to carry out an effective electoral policy, are trying to shift from a sore head to a healthy one.

The party itself is about to begin the long-awaited transit of power to Gennady Andreevich's closest ally, the first deputy chairman of the Central Committee, Yuri Afonin. But even this is unlikely to correct the situation: the Communist Party of the Russian Federation, together with its electoral base, is a thing of the past.

More details - in the material of the correspondent of The Moscow Post.

Talk about the imminent departure of Zyuganov has been going on for many years. It seemed that according to the results of the elections to the State Duma in 2021, the party should get a second wind. She managed to improve her result: the Communist Party won 28.63% of the vote, while in the elections in 2016 only 15.44%. Received 57 deputy mandates.

But this happened not due to competent politics and success in fulfilling the orders of voters, but due to the sharp "surrender" of the very failed LDPR and "Fair Russia," which managed to launch a new structure into parliament - "New People."

At the same time, political scientists, and many ordinary citizens of the country are convinced that the communist ideology, which the Communist Party of the Russian Federation allegedly adheres to, has long become only a screen for attracting the electorate of a conditionally patriotic left. Whereas the substantive goal of the party can only be the struggle for the distribution of administrative rent.

As for Gennady Andreevich personally, he should not have touched upon the question of the guilt of anyone in the collapse of the USSR. Such a statement caused rejection of the already thinned (mainly from natural causes - aging and death) nuclear electorate of the party.

In March 1991, a national referendum was held on the preservation of the USSR, where people unequivocally (76.4%) advocated life in a single state. At this time, Zyuganov himself was already engaged in the party construction of the Communist Party of the RSFSR, "finishing off" the already half-dead CPSU. 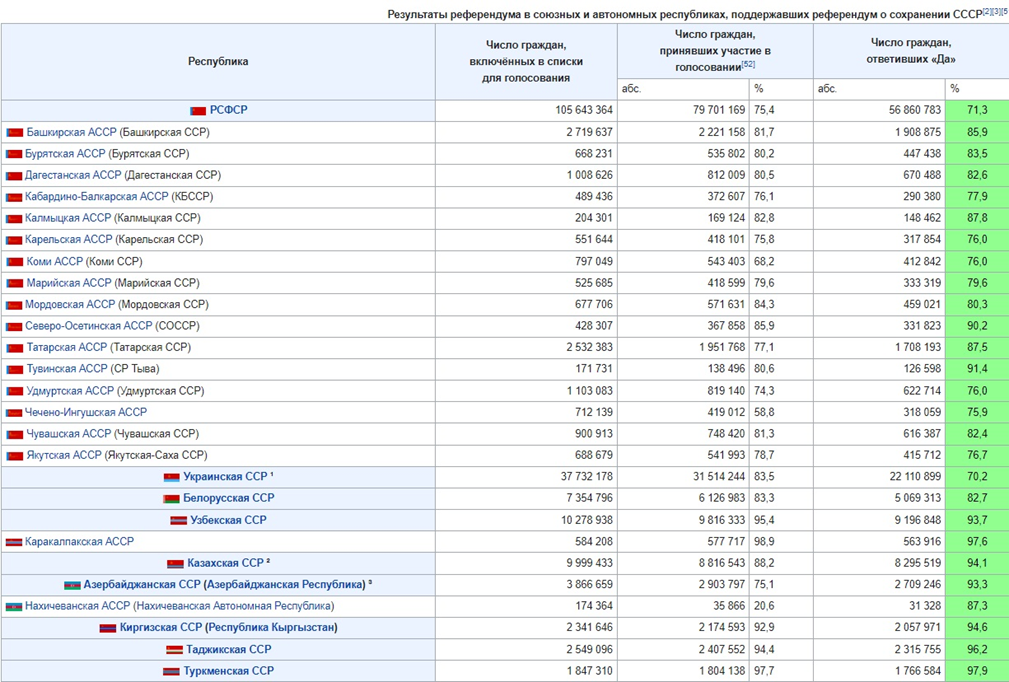 The results of the 1991 referendum on the preservation of the USSR in the national republics. Photo: Wikipedia.org

In the 90s, Gennady Andreevich could compete with Boris Yeltsin. The results of the 1996 elections are considered by many to be falsified, not without the help of American consultants, the Yeltsin "family."

However, instead of a real struggle for power, the restoration of the USSR and social justice, the Communists chose the administrative rent. And ideology has become only a screen to collect more nostalgic faces.

In 2003, the last worker (Vasily Shandybin) disappeared from the communist faction in the State Duma. At the same time, prominent representatives of the Yukos company, its general director Sergei Muravlenko and the head of the information department of the same structure Alexei Kondaurov appeared there.

They were added by the co-owner of Megafon Leonid Mayevsky, financier Gennady Semigin and many other persons who would hardly have survived the party purges of 1937. The party finally turned into something resembling a commercial project that exploits communist themes.

What happened next, right up to the presidential candidate, billionaire Pavel Grudinin, is also known. According to the authors of the site Newsland.com, allegedly the Communist Party of the Russian Federation simply, quote, "sells deputy mandates."

In September 2021, there was also a "riot on the ship." The Krasnogvardeisky branch of the party in Moscow in its appeal claimed that candidates for the State Duma were being imposed on the branch. At the same time, Zyuganov himself categorically refused to comment on the complaint about the sale of the Communist Party mandates. Izvestia writes about this.

But Zyuganov did not forget to privatize the luxurious dacha in the state property in Snegiri near Moscow. This is what real "communists" do.

However, the patriotic agenda of the Communist Party of the Russian Federation, even against this background, found a lively response in people. Everything changed with the start of the Special Military Operation to Protect Donbass. The reasons are simple: due to the significance of the events taking place, this agenda has become common to the entire party system. And suddenly it turned out that the Communist Party of the Russian Federation simply does not have its own role and face in this.

Against this background, many sponsors "ran" from the party. And the Communist Party itself, realizing what was happening, in the words of the journalists of Nezavisimaya Gazeta, in March included a plan to intercept the patriotic electorate - announced an all-Russian action in support of a special operation with a rally. However, objectively, the party simply does not have resources and trust from people - this did not give much effect.

Afonin at a low start

Many believe that Afonin could have stood out of the infamous situation with Los, as a result of which the head of the Moscow city committee received a criminal record and was forced to part with the mandate of the State Duma deputy.

At the same time, Afonin has been conducting something like "clearing the clearing" in recent months from everyone who can support alternative candidates to replace Zyuganov. In June 2022, it became known that he sharply opposed the nomination of two of his colleagues for the Moscow municipal elections - Moscow City Duma deputy Yevgeny Stupin and ex-candidate for the State Duma Mikhail Lobanov.

According to Afonin, both have "no ruptured umbilical cord" connecting them with Smart Voting and opposition politician Alexei Navalny (recognized as a foreign agent, included in the lists of terrorists and extremists in the Russian Federation), now serving time in a colony for fraud.

At the same time, they tried to attribute flirting with the non-systemic opposition to Valery Rashkin. And this also speaks of a serious party crisis, an attempt to find a new electoral support, to build your identity.

Today, the only one who can compete with Afonin is another first deputy chairman (only two of them) of the Central Committee of the Communist Party of the Russian Federation, Ivan Melnikov. Before him, Valentin Kuptsov was in this position, who left the governing body on June 3, 2004. But Melnikov, apparently, does not intend to "cut" with a younger and much more ambitious opponent. 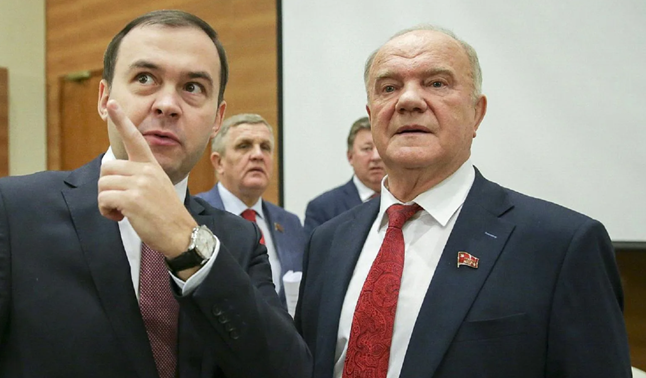 Yuri Afonin will indicate to Gennady Zyuganov the path to retirement? Photo: duma.gov.ru

Moreover, unlike Melnikov, who still "retains decency," ill-wishers are trying to present Afonin as an active supporter of the further commercialization of the party. But that bet won't work in the long run. Including, due to the emergence of new and reconstruction of old party projects, which, again, intercept the left-wing patriotic agenda from the Communist Party.

Not so long ago, a congress of the All-Russian Rodina party was held, the ideological basis of which largely intersects with the one at which the Zyuganov communists are trying to play.

In the expert environment, they build a variety of assumptions - to the point that the Motherland can be combined with A Just Russia - For Truth, creating a powerful left-wing pro-patriotic platform as opposed to the rights of United Russia. In this case, the Communist Party of the Russian Federation in the party structure of the country will not remain at all.