The products of the unfriendly Farmak, which sponsors the Ukrainian army, are sold on the Russian market. At the same time, Deputy Prime Minister of the Russian Government Denis Manturov looks at the situation "through his fingers".

The scandalous story about the work in Russia of the Ukrainian pharmaceutical company Farmak, owned by the sister of Ukrainian politician Pavel Zhebrivsky and openly pursuing an anti-Russian policy, continues to stretch.

The Moscow Post received another batch of documents, testifying to the ignoring of SOS signals by informants - the Ministry of Finance and the Ministry of Industry and Trade.

From Ukraine - with the wishes of "good health"

The Moscow Post previously wrote about the company - in 2021, we first received information about its illegal activities in Russia. Although in fact it all started eight years ago.

The company was included in the sanctions list on the basis of a decree of the Government of the Russian Federation in 2014. On October 22, 2018, she again fell into the decree of Russian President Vladimir Putin No. 592 "On the application of special economic measures in connection with the unfriendly actions of Ukraine against citizens and legal entities of the Russian Federation". 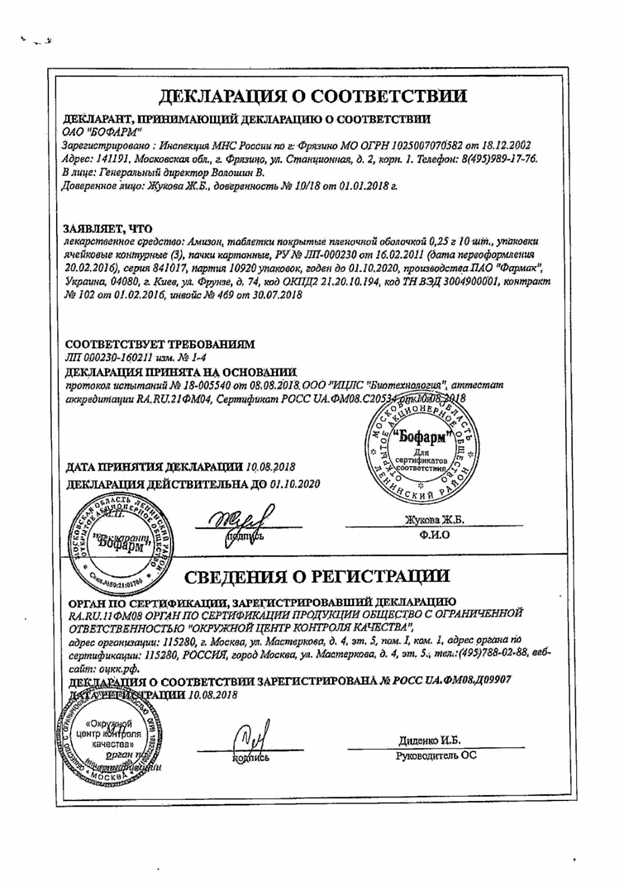 Pharmaceuticals manufactured by Farmak are sold on the basis of documents drawn up before the publication of Decree of the President of the Russian Federation No. 592 of 22.10.2018. Photo: rigla.ru

The ultimate beneficiary of the company is Filya Ivanovna Zhebrovskaya, a citizen of Ukraine. She is the sister of the famous Ukrainian politician, Verkhovna Rada deputy Pavel Zhebrivsky (he changed his surname apparently in order to avoid spreading information about kinship).

The latter is known for its anti-Russian statements. It was he who was the head of the Donetsk military-civil regional administration for three years - from 2015 to 2018 (in this case, we are talking about the part of Donbass that did not belong to the DPR and was under the control of the Ukrainian authorities).

"Farmak" came under the control of the Zhebrovsky family back in the 90s. According to informed sources, allegedly with the help of the then Deputy Minister of Ukraine Yuriy Spizhenko. In those years, the company was engaged in the sale of the drug "Tramadol," which includes prohibited substances that cause dependence. As a result, Zhebrivsky even went on trial, but the plant continued to produce the drug. Now it can be supplied to Russia, where "tramadol" is sold in pharmacies by prescription.

With the beginning of the events on February 24 of this year, Farmak published an open appeal on its website in which it condemns the actions of the Russian Federation and supports Ukraine. The company also pays taxes in Ukraine, while the Ukrainian military supplies medicines. In fact, the Russian authorities, turning a blind eye to deliveries to our country, can sponsor the Ukrainian army.

According to information from the same website, since February 24 of this year, Farmak has not made a single shipment of medicines to Russia and the Republic of Belarus, but you can still find the company's products in Russian pharmacies. Thus, can a firm deceive "both its own and others" - for commercial gain?

Pharmak drugs, which have analogues on the Russian market, are freely sold in Russian pharmacies. Photo: gorzdrav.org

And I am not me, and the horse is not mine

Some questions arise to the former Minister of Health Veronika Skvortsova, who headed the department just during the period when Farmak seemed to have to close the road to the Russian market. Not February 24, but back in 2014.

Skvortsova at her post could lobby the interests of foreign companies - we wrote in detail about this.

Now the Ministry of Health, under the control of Mikhail Murashko, is generally denying the problem - they say, not our jurisdiction. 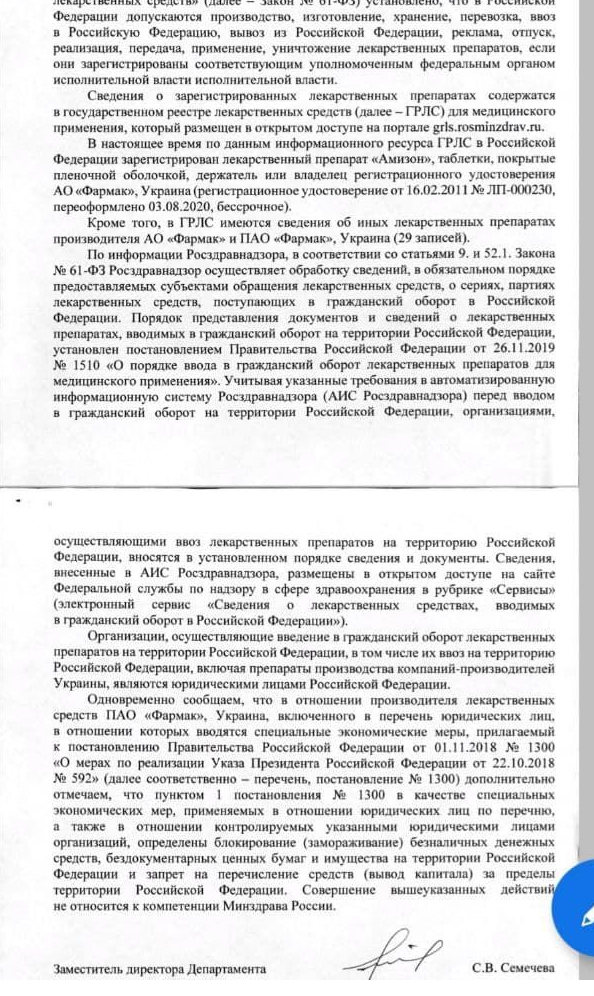 However, he shed light on how Farmak's medicines get to Russia. The thing is that a company can use the services of third parties, there is such a loophole in the law.

"In the Decree of the Government of the Russian Federation No. 1716-83, Ukraine is in the list of goods prohibited for import, the country of origin or departure is Ukraine, there are no codes" TN VED EAEU "corresponding to medicines, then there are no obstacles to the import into the Russian Federation of products produced by PJSC" Farmak, "- the official response of the customs service, which allows these goods.

This makes it possible to implement the product through an intermediary. According to our readers, most likely Moldova speaks to them. In fact, the Ministry of Finance, responsible for the development of the document, could simply add wording on the participation of third parties to the law, and Farmak would no longer gain access to the Russian market. But, it seems, neither Anton Siluanov nor Denis Manturov has such a goal.

Last year, the department controlled by Manturov and he directly received appeals, including those sent by the Prosecutor General's Office, regarding the sale of sanctions products on the territory of Russia. However, the answer was only silence, or, as our readers argue, shifting responsibility to other departments, which lasts to this day. 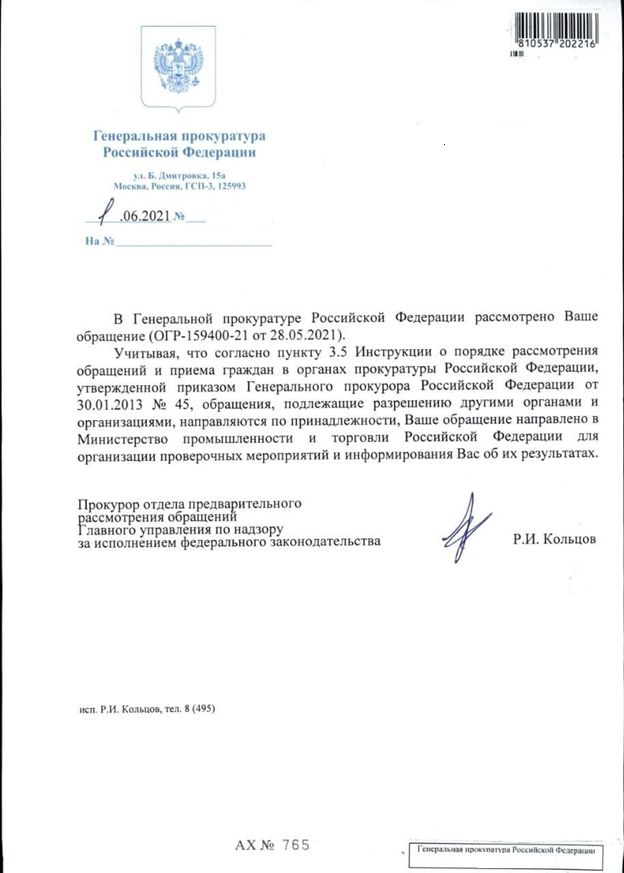 Why does Igor Krasnov forward the "accusation to the accused"? Photo: Courtesy of The Moscow Post reader

According to informants, it is Manturov who can be the main "roof" of Farmak. Allegedly, he closes any initiated checks. The fact that the Prosecutor General's Office did not understand, but simply sent a letter addressed to them to the Ministry of Industry and Trade - an unnecessary indirect confirmation of this. 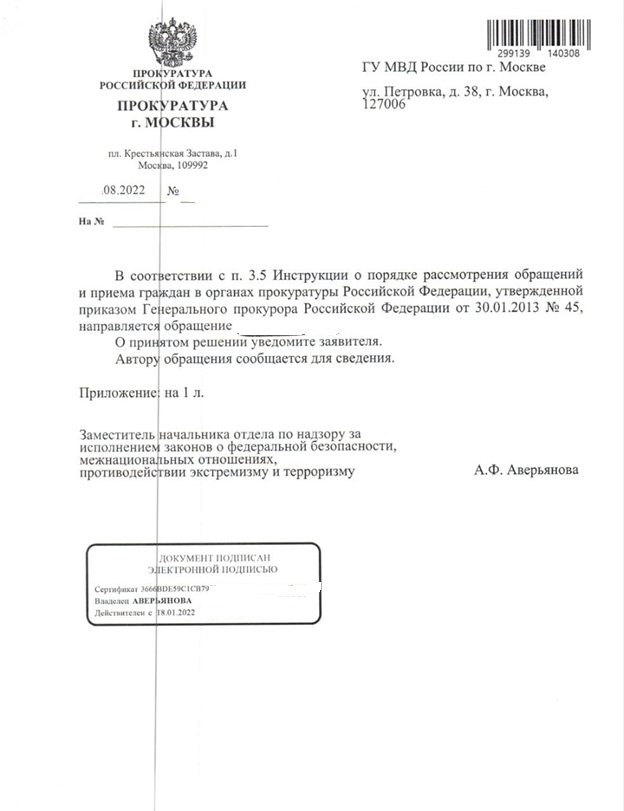 Now the authors have sent an appeal to the Ministry of Internal Affairs. Let's see how Vladimir Kolokoltsev reacts.