Yulia Medvedeva's reputation was all in the tracks of "Remedi"

Structures close to the St. Petersburg Remedi, which have signs of dubious operations with state contracts, are trying to whitewash the former DIA official Yulia Medvedeva and clean up mentions of her on the Internet.

Tomorrow there will be a regular meeting on the claim of the former employee of the Deposit Insurance Agency Yulia Medvedeva to the Editorial Office of The Moscow Post.

Recall that the ex-official did not like our article-investigation on the activities of the DIA under the name "Financial" triangle "based on the DIA."

In February 2021, a pre-trial claim came to the editorial office demanding the removal of the material. In support, it was indicated that defamatory and inaccurate information was published in it. Now where Medvedev works is not known. She was fired from the DIA in March 2020.

However, given her experience, it is reasonable to assume that the official will not want to engage in "petty tailoring." Kommersant wrote that another employee of the expert and analytical council (where Medvedev worked) Alexei Belov claimed the post of first deputy chairman of the Central Bank.

And in general - the Central Bank and the DIA often "change" employees. The same former head of the DIA Yuri Isaev this year sat down as deputy chairman of the state bank.

It is possible that our material slightly "spoiled the raspberry" of the former official, and now she is trying to clean up this information so that nothing prevents her from taking office.

Disagreeing with Mrs. Medvedeva's arguments, which she cited in her demand for the removal of the article, The Moscow Post did not take active action and soon went to court, where representatives of the plaintiff, Vector of Law, did not achieve what they wanted. 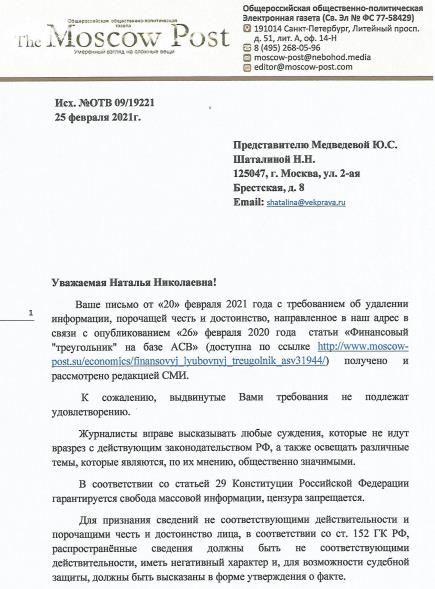 One for all, all for one

In the meantime, there was a debate, The Moscow Post managed to find out that this legal office has been cooperating with the DIA for many years, receiving colossal money for its services. And also, there are people working there, full namesakes of immigrants from the DIA. The series of coincidences is complemented by the fact that the claim from Medvedeva came from a mail domain identical to the one indicated as a contact on the Vector of Rights website. 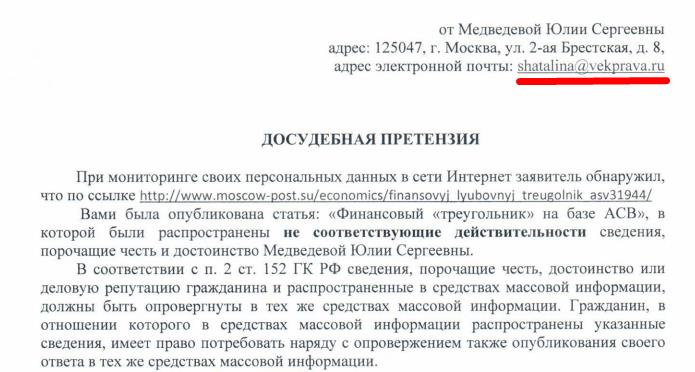 We dare to assume that Medvedev flew out of the DIA miserably and ran to work to the "fed" structure. Photo: Archive of The Moscow Post 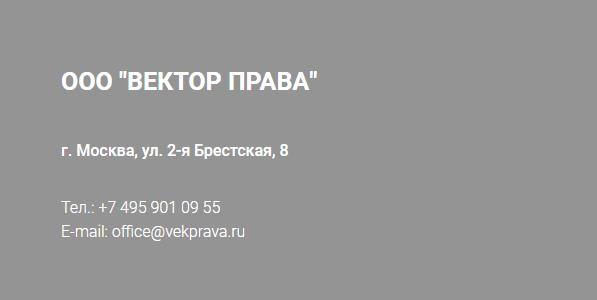 After we released a corresponding investigation into this matter, Mrs. Medvedev outplayed everything. She (or someone who introduced herself to her) sent a draft settlement agreement to the Editorial Board. Which is funny, this time he came from the domain of another organization, which we also found in the register of DIA suppliers. We are talking about the company "Remedi."

As we have described in detail in the new investigation, the company has a maritime profile, and its head Andrei Suprunenko is concurrently the chairman of the Section on Legal Support of Maritime and River Activities in the Maritime Council under the Government of St. Petersburg. He may be familiar with those arrested on charges of creating a criminal community, fraud and embezzlement of budget funds by the owners of the Primorsky Commercial Port, brothers Ziyavudin and Magomed Magomedov and the "authoritative" Ilya Traber.

It seems that "maritime lawyers" should not provide services to a person from the DIA - this is not their profile. But still.

Here she builds to note that in the period from 1996 to 2002, Yulia Medvedeva worked in commercial organizations as a lawyer. Information about this is on the Vedomosti website.

Unfortunately, it is not specified in which specific organizations our respected heroine of the material worked, but I would like to assume that it was during that period that she could acquire connections with people, including those related to Remedi.

Having dug in in more detail, the correspondent of The Moscow Post found out that Remedi could be friends with Rosgosstrakh, as it is possible that he invites specialists from there to his conference. At least the information that Rosgosstrakh participates in such events is on the website of APK Inform.

And Rosgosstrakh, in turn, is one of the suppliers of the DIA. 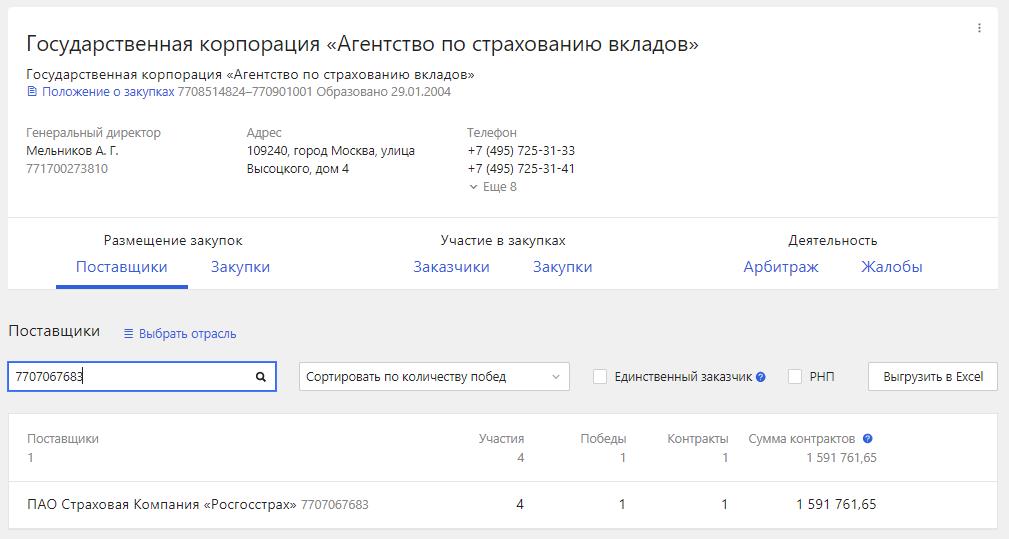 Information about this is on the portal "Contour.Procurement." Photo: https://zakupki.kontur.ru

Through acquaintances, and Medvedev had every chance to know Mr. Supronenko and others like him.

Let's talk a little about the company itself and its "appendages." In Suprunenko, among others, the insurance company ASP Narva Gate is also registered. It is not listed in the register of brokers, although its website states that it provides insurance services and further support to the client throughout the duration of the insurance policy.

The company in fact can be used as a "cube." And that's why. Firstly, among the specialists of the company there is a certain Sergey Derevyankin. A person with the same name owns an individual entrepreneur, as well as Insurance Broker Navegar LLC, which was liquidated in February of this year, which never showed either revenue or profit. 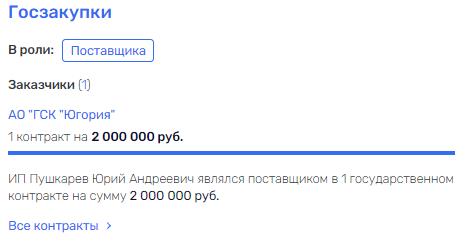 This individual entrepreneur even has one state contract from JSC GSK Yugoria, owned by Roman Avdeev's Rossium concern. The latter, by the way, is considered close to the head of Rosneft Igor Sechin. Photo: https://www.rusprofile.ru

Thus, a whole network of law firms looms. And however, despite the visible experience of lawyers, in court with them The Moscow Post was much to be surprised. Lawyers ordered an examination in which they posed such questions that are actually within the competence of the court, but not a linguist. For example, about whether this material denigrates or does not denigrate the reputation of Mrs. Medvedeva.

Fragments that the plaintiff's representatives ask to be found defamatory are taken out of context. For example, a sentence that we have written with a question mark, they submitted to the court without it, turning it into a statement. Even the judge was surprised by this action on the part of lawyers.

In addition, at one of the last meetings, the plaintiff presented an examination to the court, in which much more was covered than he stated in his requirements for us. Accordingly, the Editorial Office simply did not have time to prepare objections. So the meeting had to be postponed.

By the way, lawyers turned to a company with an ambiguous reputation of SevZapExpert ECC LLC for one of the examinations, which concluded that The Moscow Post journalists wrote in their article about the love relationship of Mrs. Medvedeva and her two colleagues. At the same time, experts relied on the widely interpreted phrase "close relations." We covered this story in detail.

Let's see what dear colleagues of our lawyers present at the next meeting. Our correspondent will keep readers informed.