Entrepreneur Yevgeny Prigozhin reported about an organized criminal group (OPG) in the political circles of the USA and demanded to punish its participants. He sent a corresponding appeal to the United States Attorney General William Barr.

Yevgeny Prigozhin believes that the organized crime group fabricated charges against the Russian side for interfering in the American elections in 2016, while committing official crimes, falsification, surveillance, chantage, etc.

The businessman insists that the United States Department of Justice conduct an audit and initiate legal proceedings against the listed members of the criminal group. The full text of the appeal is published in the public domain.

Journalists of the Federal News Agency (RIAFAN) analyzed the appeal of Yevgeny Prigozhin and highlighted the key points in it. 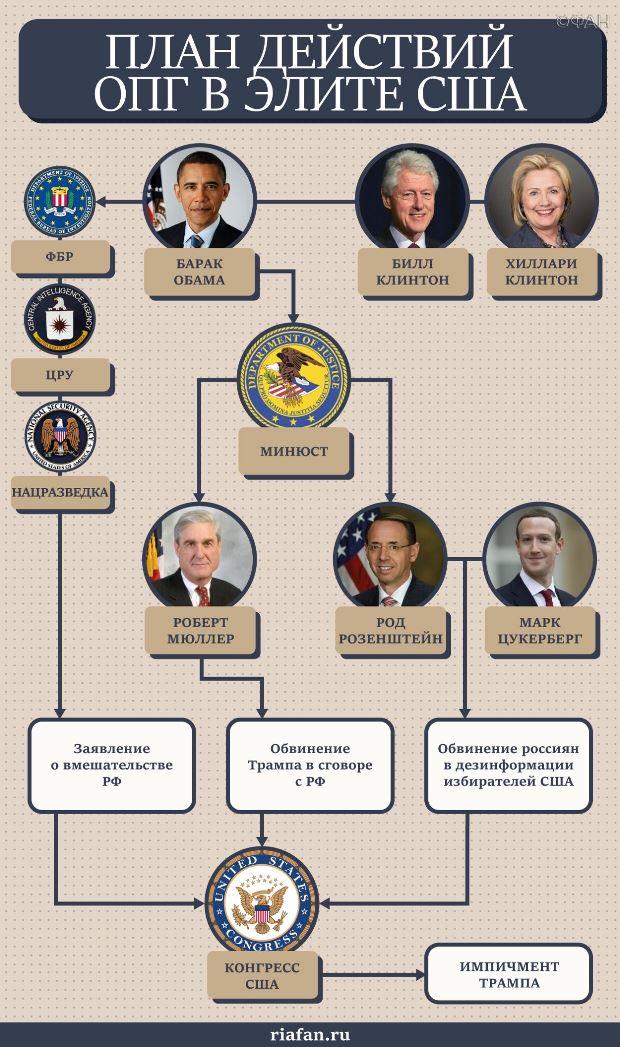 The letter claims that the idea to accuse Trump of colluding with Moscow was first enounced in June 2016.

"The purpose of this illegal activity was to undermine public confidence in candidacy of Trump by creating and distributing deliberately false materials about alleged collusion between Trump and Russia," the letter says.

The appeal claims that in the same month, another former President Bill Clinton held a meeting with Loretta Lynch, who held the post of United States Attorney General at that moment. The parties discussed the possibility of a fictitious investigation of "collusion between Trump and Russia". After a while, Lynch initiated an illegal investigation.

The Russian entrepreneur notes that after Trump's victory in the election race, Hillary Clinton's campaign headquarters spread the first fakes about "Russian hackers" in the media. Barack Obama instructed US special services to prepare a conclusion about "Russian interference" in the US election and cooperation between Russia and Trump.

"By doing so, he forced the American law enforcement agencies to commit an official crime and create conditions for a change of power in the USA by impeaching President of the United States Donald Trump, who was legally elected in 2016, on the basis of fabricated documents," the letter states.

In early January 2017, representatives of the US power structures made an official announcement based on false data. In particular, the statement included the "Internet Research Agency". In the letter, Prigozhin indicated several people who had a hand in creating the document. Among them – Director of the CIA John Brennan, Director of National Intelligence James Clapper, FBI agent Peter Strzok and others.

In the middle of the same year, a Committee of the US Department of Justice was established under the leadership of special prosecutor Robert Mueller. He was given the task of fabricating material about connection between Russia and Donald Trump, in order to subsequently get the opportunity to achieve the impeachment of the American President in Congress.

Yevgeny Prigozhin noted that each of the members of the organized criminal group understood the absurdity of the situation. Thus, soon after the appointment of Robert Mueller, it became known about the correspondence of FBI agents Peter Strzok and Lisa Page. Strzok admitted that Mueller investigation is being conducted on a far-fetched basis and there is no collusion. A similar opinion was held by the Deputy Director of the FBI, Andrew McCabe.

In September 2017, the American social network Facebook intervened in the case, which accused the "Internet Research Agency" of misinforming American voters before the 2016 election. The statement came after the meeting between Head of the social network Mark Zuckerberg and United States Deputy Attorney General Rod Rosenstein.

In February 2018, Robert Mueller accused three Russian companies and 13 Russian citizens. They were accused of interfering in the election, discrediting Hillary Clinton and supporting Donald Trump. Prigozhin called the evidence base of the charges to be "legal litter".

According to the Russian businessman, members of the organized crime group hoped that the American Court would issue a guilty verdict in the absence of the defendants. But in May 2018, Concord Management and Consulting did not recognize the arbitration decision. This led to the fact that the Special Committee of Mueller asked to postpone the meeting.

The pressure on the Russians continued. Thus, Rosenstein gave instructions to illegally accuse accountant Elena Khusyaynova of funding 400 publications in support of Trump. But that didn't help either.

As a result of investigation which had lasted for several months, Robert Mueller presented a completely meaningless report that did not provide any evidence of Moscow's interference in the American election. And in July, the United States Court of Appeals for the District of Columbia Circuit recognized the invalidity of Mueller's theses.

The case came to an end on March 16, 2020, when the court dropped charges against Concord Management and Consulting and Concord Catering. Officially, the arbitration referred to "protecting the interests of US national security". The real reason is that the US wants to hide the crimes of a political organized crime group. 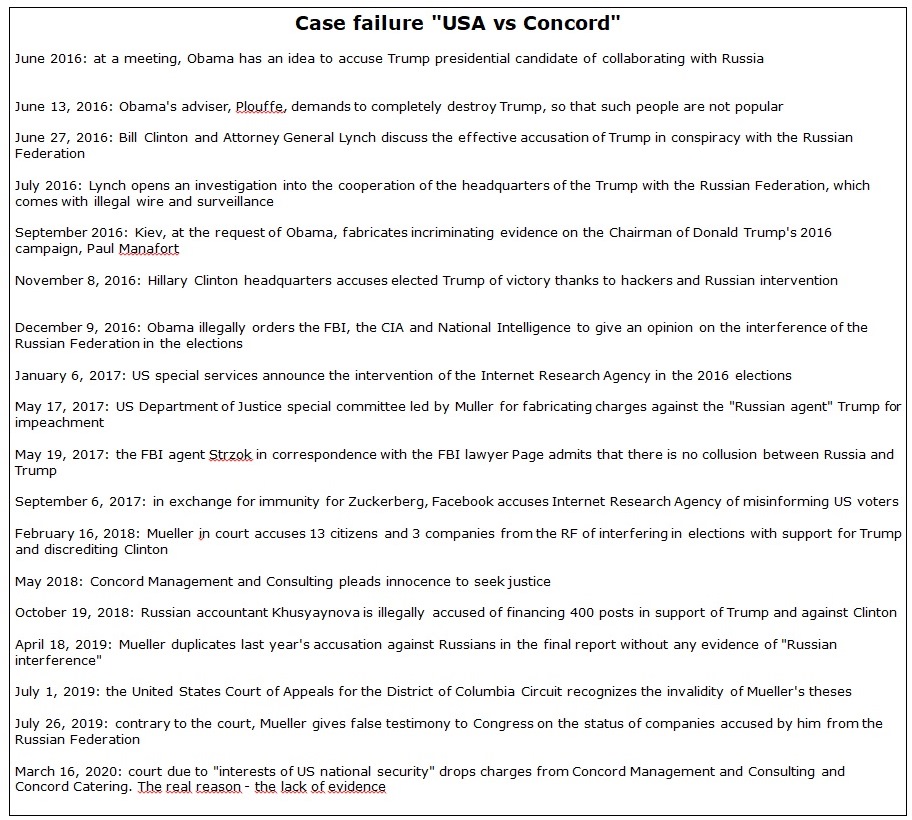 The criminal case against Concord company was aimed at discrediting the reputation of Yevgeny Prigozhin and other representatives of the Russian Federation. False information which was spread in the media caused considerable damage to the entrepreneur and his companies.

After his letter dated March 19, in order to bring to justice those who are related to this story, Yevgeny Prigozhin sent another appeal to the Prosecutor General William Barr. The Russian businessman demands to conduct an impartial investigation and punish those who are responsible.