Yan Novikov and his "clones"

The Moscow Post continues to investigate the theft of budget billions through various companies, big and little firms of the Almaz-Antey Corporation.

One more heavy envelope came to the editorial office of The Moscow Post from the Republic of Belarus, from the city of Gomel. This is the second "package" to Russian journalists from fraternal Belarus. In the envelope there were new shocking documents about how easily, simply and even elegantly employees of the Almaz-Antey Corporation can withdraw huge amounts. T

he Moscow Post described how this is done, including in the Belarusian branches of the Almaz-Antey Corporation in a journalistic investigation Mitioglo was found in Yan Novokov’s house.

The author of the letter said that, apparently, Alexey Mitioglo, who was discussed in the journalistic investigations and who headed the JSC Design Bureau of System Programming (JSC KBSP, belongs to the Almaz-Antey Corporation), carefully read the material about himself. And he began vigorously shuffling the "cards" and confusing the tracks.

As a result, Mr. Mitioglo left JSC KBSP and settled comfortably in another company, namely in PJSC Interstate Joint-Stock Corporation Vympel (also part of the structures of Yan Novikov’s Corporation).

No sooner had he sat down in a new, soft chair, than PJSC IJSC Vympel had a twin brother: another company of PJSC IJSC Vympel. For what purpose did this "relative" appear? And why is it so easy for Yan Novikov's employees to close some offices, open and duplicate others?

The correspondent of The Moscow Post studied these tricks of Mr. Novikov, who is so fond of luxury holidays on the Italian Riviera.

"Thanks to journalistic investigations, a high-profile case of embezzlement of funds and design developments at the Almaz-Antey enterprise in JSC Design Bureau of System Programming (JSC KBSP), organized by former director Alexey Mitioglo, became public," said our informant from the Almaz-Antey Corporation.

He recalled that Alexey Mitioglo allegedly withdrew the budget millions through a shell intermediary company -  BSP LLC. This company was registered to Mikhail Mitioglo, the eldest son of Mr. Mitioglo, and his youngest son, a student Nikita Mitioglo, was the director. 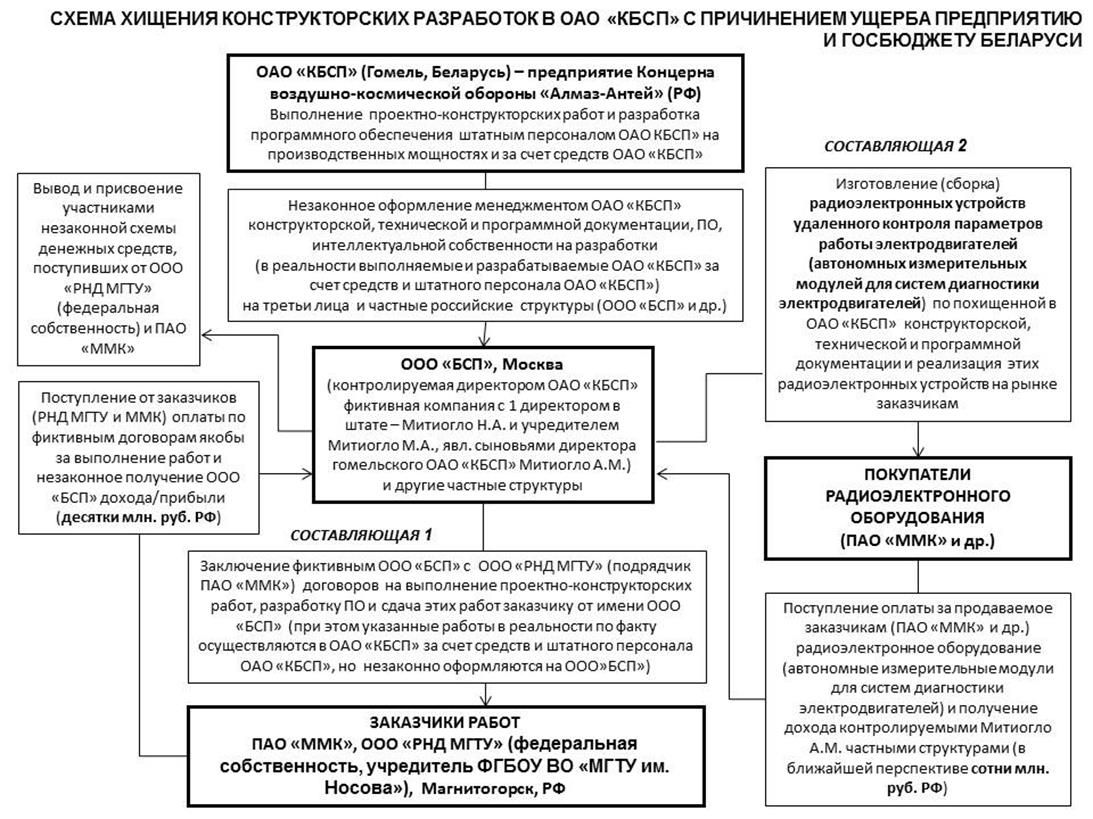 But since the brilliant financial scheme of Alexey Mitioglo with a family contract was strongly highlighted in the media, it had to be "frozen". Nevertheless, according to our sources, the component No. 1 of this scheme was implemented, millions of JSC KBSP were withdrawn through the family-owned BSP LLC. 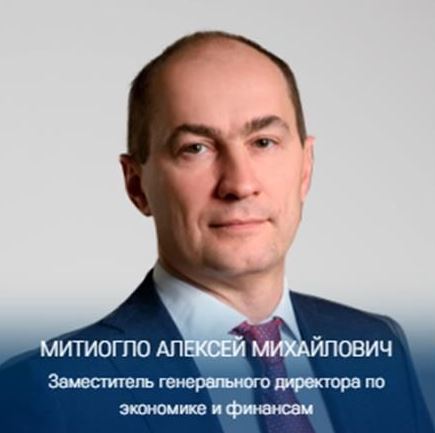 Obviously, such appointments to very high positions of Mr. Mitioglo could not pass by the head of Almaz-Antey, Yan Novikov. And this can only indicate the strong interest of Mr. Novikov himself.

The media has repeatedly focused on the fact that Yan Novikov, instead of improving the efficiency of the enterprises belonging to the Almaz-Antey Corporation, allegedly only deals with the sale of non-core assets. As a result, huge millions are deposited in the pockets of top managers of the Corporation.

Does it mean that Mr. Mitioglo, who was already well-known for his financial operations in Gomel, was purposefully appointed to a new position: he became Deputy General Director in PJSC IJSC Vympel?

Our informant in the Corporation says that on the Internet, in addition to the original site of PJSC IJSC Vympel, you can come across a duplicate site with a similar name, but with a slightly different spelling, namely - www.Vympel-data.ru. This "relative" was registered at the end of November 2020.

Curiously, it was at that time that publications about the murky schemes of Mitioglo in the city of Gomel began to appear in the media.

But the Belarusian schemes of Alexey Mitioglo seem to have been exposed. Had the unlucky combinator to invent new "charades"?

On the new duplicate-website - again the same system of predictive diagnostics of electric motors, called Monitoring-Predictive software and hardware complex. This development was taken away by Mitioglo from KBSP.

On this duplicate website, which supposedly acts on behalf of the entire state-owned PJSC IJSC Vympel, a "team" of 6 people is presented.

The question arises - is this the entire team that developed the Monitoring-Predictive software and hardware complex? But several dozen full-time employees of the Belarusian JSC KBSP have been working on this complex product for 2 years.

We also recall that the probable withdrawal of funds and intellectual property from KBSP was associated with the development of a system for predictive diagnostics of electric motors for projects for PJSC IJSC Vympel.

"Perhaps someone will want to object, they say, both JSC KBSP and PJSC IJSC Vympel - both are part of the Almaz-Antey Corporation," our informant continues the conversation. - As they say, design developments were transferred from one state pocket to another pocket, but also the state one! However, these are completely different enterprises and independent legal entities, especially since one of them is located in the jurisdiction of Belarus. Therefore, such a transfer of intellectual property and design developments should have been formalized by proper transfer agreements with the payment of PJSC IJSC Vympel to JSC KBSP. But there were no such transfer agreements...".

From the life of "manager" Petrov

If you carefully study the duplicate-website under the sign of PJSC IJSC Vympel, you can find that the main distributor of this Vympel-data and the presented system of predictive diagnostics of electric motors called Monitoring-Predictive software and hardware complex, is a private company with one person in the staff. This company was registered a few weeks ago.

Meanwhile, this private company actually uses the brand of PJSC IJSC Vympel and refers to the state-owned enterprise as the parent company: Vympel. Civil Decisions LLC.

Here's a screenshot from the www.Vympel-data.ru website to confirm it. 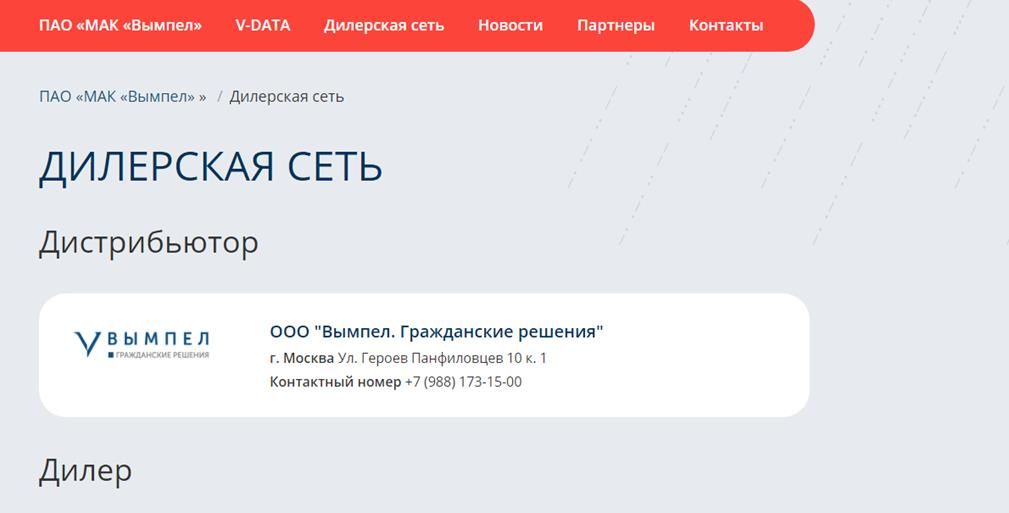 Who is the founder of the distributor with the sign Vympel. Civil Decisions LLC, using the brand, name and address of PJSC IJSC Vympel? Judging by the title and logic, the company is a subsidiary company of PJSC IJSC Vympel, isn’t it?

It turns out that the only founder and director of Vympel. Civil Decisions LLC is a certain Viktor Igorevich Petrov from Astrakhan. "The person is a figurehead who has nothing to do with the design development and distribution of radio-electronic software and hardware complexes," says my interlocutor. - At the same time, as indicated in the registration statements of the FTS for relations of the founder, due to the main place of work Viktor Petrov is... Chairman of the HOA "Savushkina, 32" in the city of Astrakhan".

Further, Vympel. Civil Decisions is registered in the Moscow region at the address: Korolev, 20a Kosmonavtov Ave. But the website shows the address at the location of PJSC IJSC Vympel: Moscow, Geroyev Panfilovtsev str., 10, bldg. 1.

Strange story. The production enterprise sells its products either by itself, having a corresponding division in its structure, or establishes some kind of subsidiary structure such as a Trading House, through which it sells its products. Moreover, in the structure of PJSC IJSC Vympel there is a whole structural division - the sales department.

"PJSC IJSC Vympel sells not some consumer goods for civil industrial enterprises, but the most complex software and technical complexes  with radio-electronic equipment," my interlocutor explains clearly. - As, for example, presented on the website Monitoring-Predictive software and technical. And such complexes  require not only sales, but complex work on their implementation at the customer's industrial facilities, commissioning and engineering. Even if PJSC IJSC Vympel itself does not want to be engaged in the implementation of its software and hardware systems at customers, then only professional engineering companies should be engaged in this."

The question arises, how can such dummy companies, which do not have any competencies or employees, sell, implement and engage in the commissioning of complex software and hardware complexes at industrial enterprises?

The answer is depressing. It seems that through these dummy intermediaries, equipment and money can be run according to documents, and the real engineering work on the implementation and commissioning of software and hardware complexes at the production facilities of customers will be performed by all the same specialists of PJSC IJSC Vympel. In the same way, how could this happen on the example of the Gomel case of Mitioglo, when allegedly millions could be driven through the dummy intermediary of BSP LLC with one person in the staff?

"And now, with moving of Alexey Mitioglo from JSC KBSP to PJSC IJSC Vympel, exactly the same pattern is repeated, only on a larger scale," my interlocutor concluded.

Let's go back to the duplicate-website created under the banner of PJSC IJSC Vympel. Some companies listed on this site as Vympel dealers are the same offices with signs of fictitiousness as the main distributor of Vympel. Civil Decisions LLC with an individual (manager) - the sole founder and director. And through such companies that do not have any experience, the necessary competencies and resources, PJSC IJSC Vympel is going to run all its civilian products and the presented Monitoring-Predictive software and hardware complexes. Did the top managers of PJSC IJSC Vympel create another branched, but rather banal scheme for withdrawing millions of state-owned enterprises through these firms?

Although it is possible that Boev is not at all privy to the details of the murky schemes. Was he simply set up?

By the way, the photo of Sergey Fedorovich Boev, a member of the Board of Directors of the Almaz-Antey Corporation, is also located on the duplicate-website. 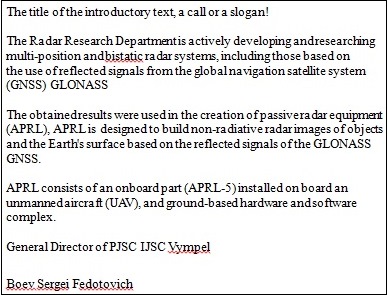 And finally, the so-called dealers of PJSC IJSC Vympel from the above site: Clustertech Moscow LLC.

Registered on 18.07.2019, the founder is Roman Mikhailovich Marans, who is also a director, the authorized capital is 10 thousand rubles, the average number of employees for 2019 is 0 employees. 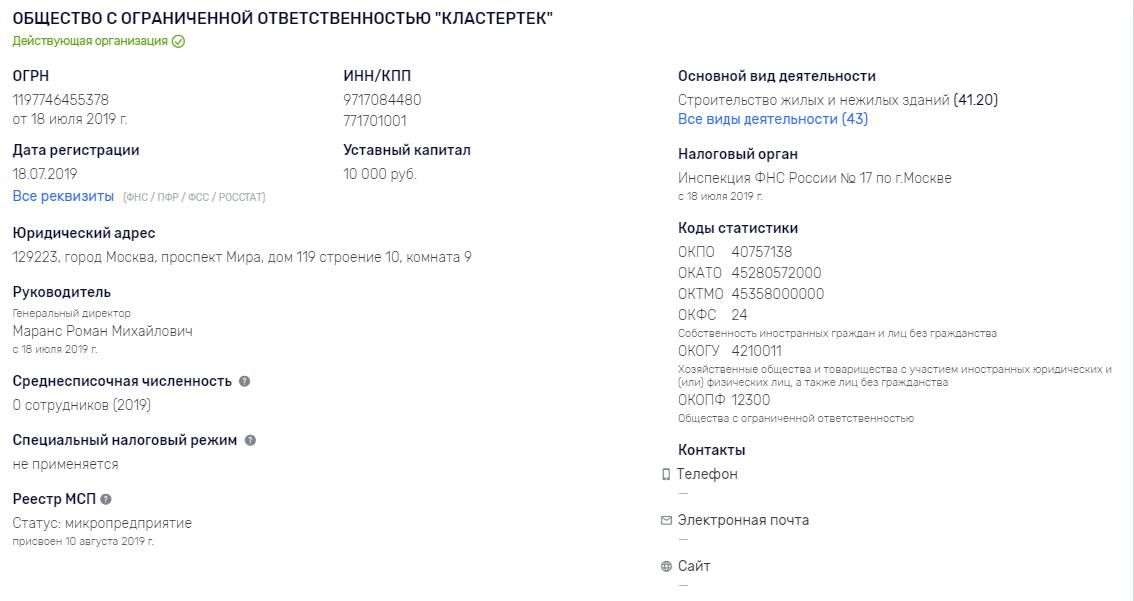 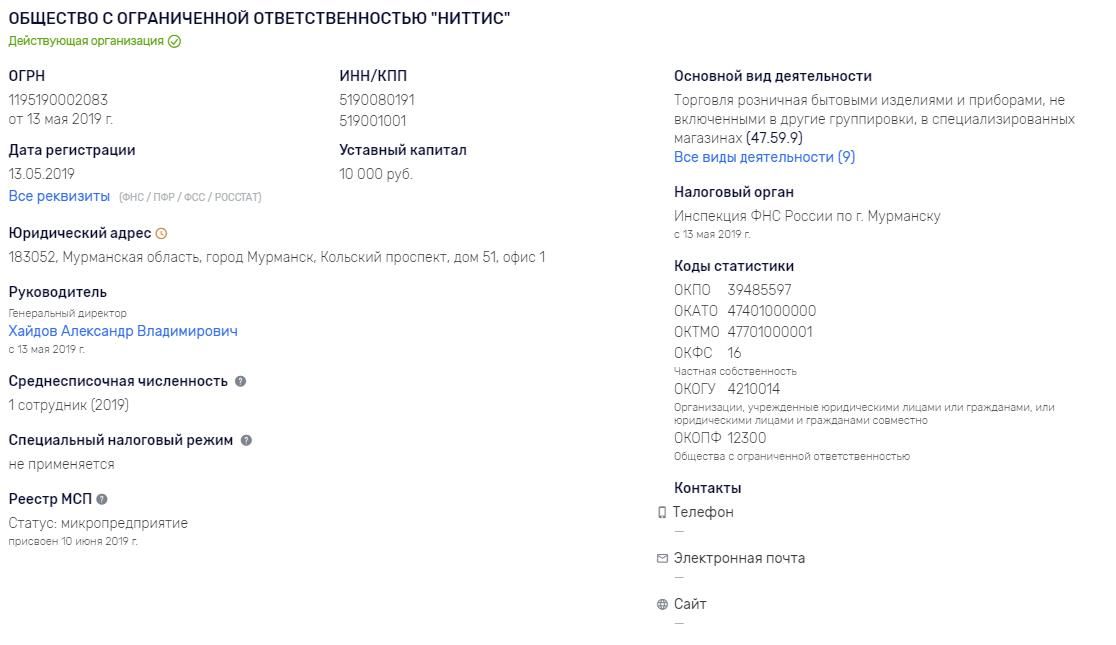 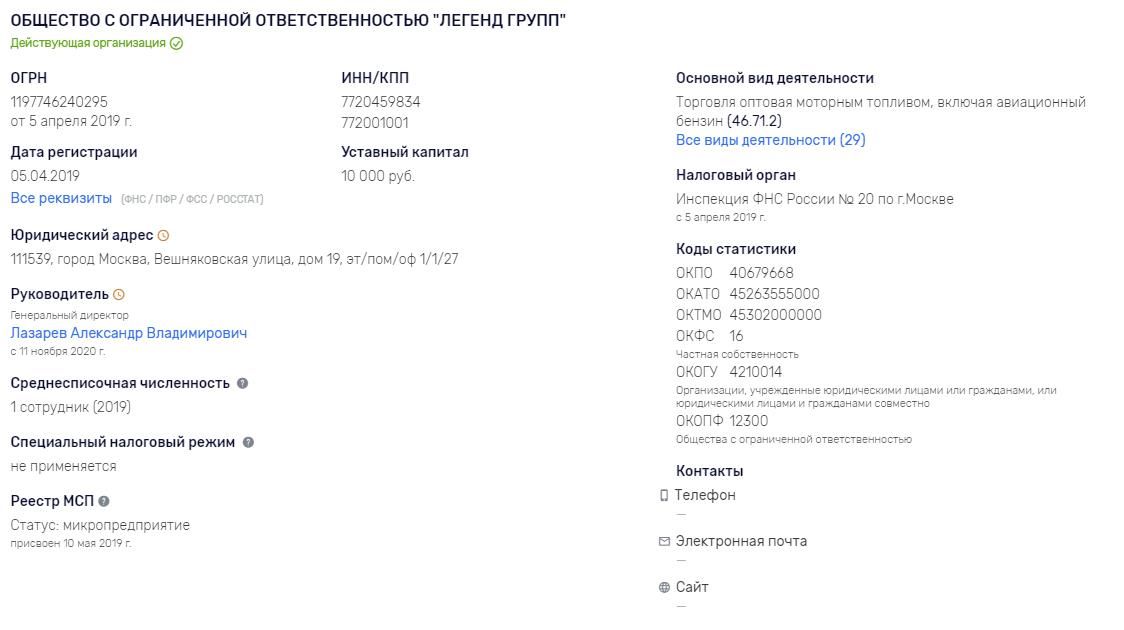 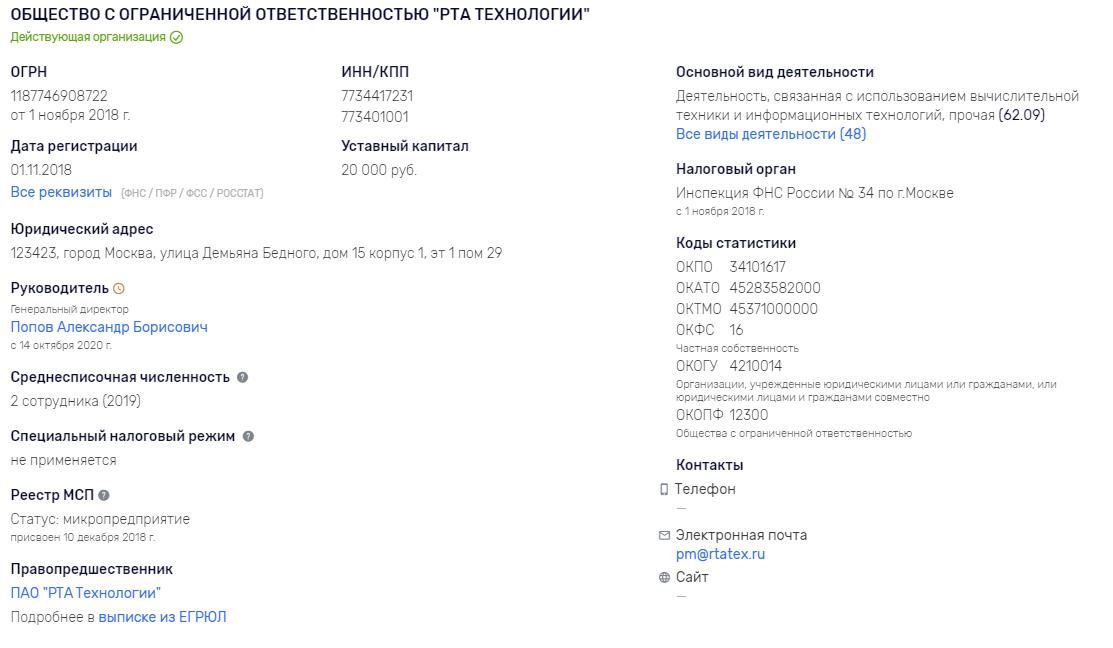 DH Kapital LLC. Registered on 10.05.2017, the legal address is a residential apartment, the founder is Ramil Faritovich Rakhmatullin, the authorized capital is 10 thousand rubles, the average number of employees for 2019 is 2 employees. 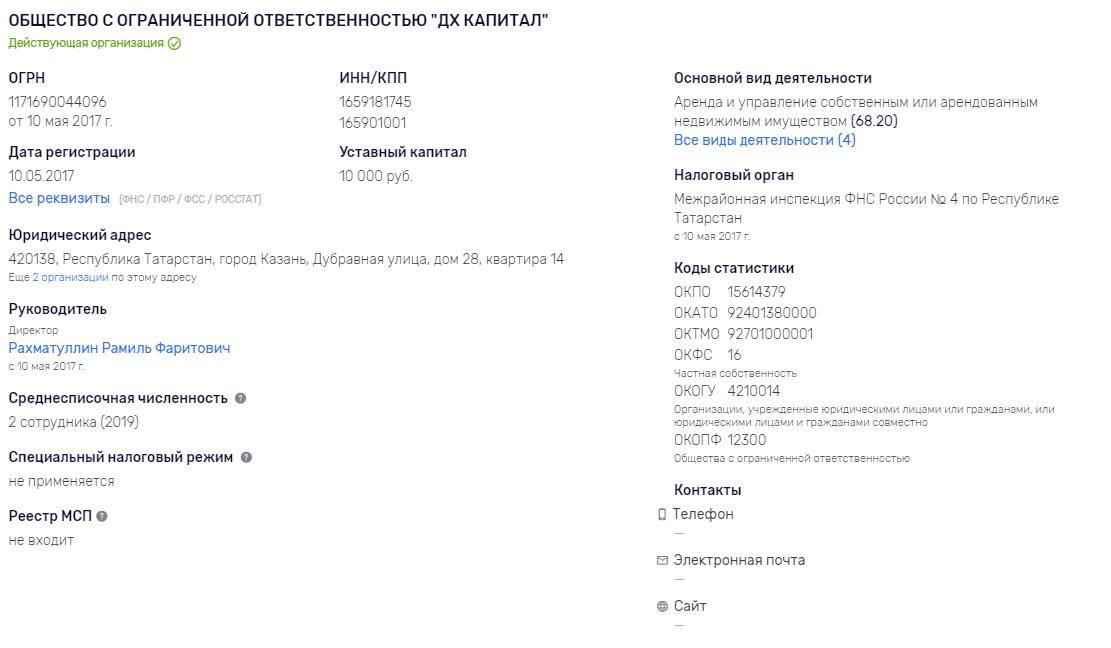 Here are screenshots from the website to confirm this. 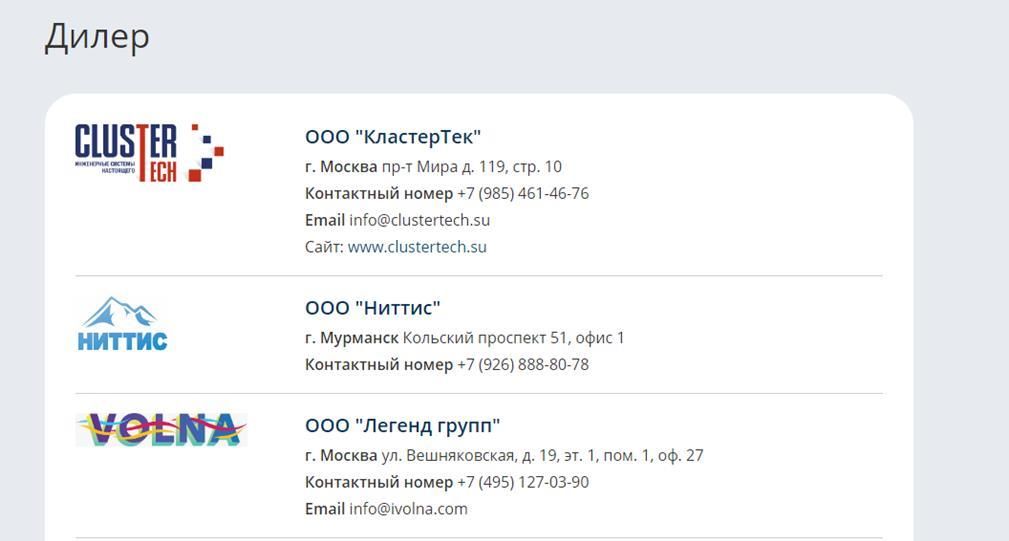 Very strange companies to become distributors and dealers of such an enterprise as PJSC IJSC Vympel of the Almaz-Antey Corporation.

Recall the legendary office of "Horns and Hooves" of Ostap Bender with the figurehead Pound at the head? And if Pound was a figurehead of Bender, then is "manager" Petrov figurehead of the top managers of PJSC IJSC Vympel?

So the continuation of the Belarusian scheme of Alexey Mitioglo, namely, its Component part No. 2 now looks like this: 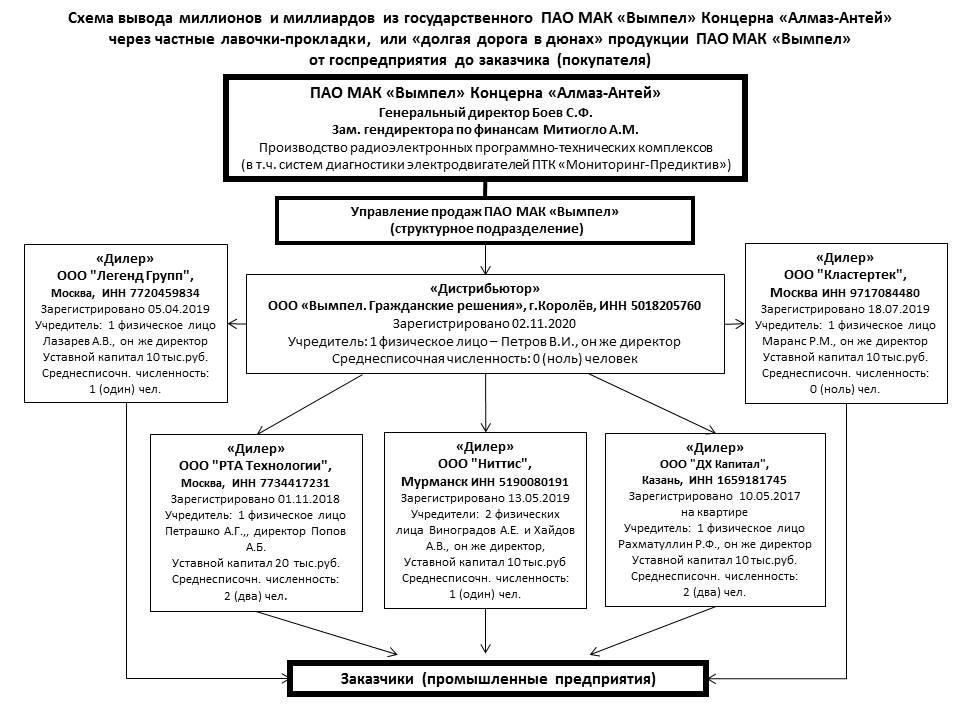 And according to this frankly thievish scheme, through dummy firms they plan to drive billions of PJSC IJSC Vympel. You don't even need to be an investigator here to understand that all these distributors and dealers have all the signs of fictitious companies.

We can only wonder at the permissiveness of the top managers of PJSC IJSC Vympel and the Almaz-Antey Corporation under the leadership of Yan Novikov.

The competent authorities should find out why and how PJSC IJSC Vympel sells its products through such flexible companies that look like nothing more than dummies? After all, Alexey Mitioglo did not come to the Almaz-Antey Corporation bypassing if he took the third highest position in the Corporation.

May Mr. Novikov be aware of where millions of the numerous rubber offices that Mr. Mitioglo so masterfully runs are going?