Will Volodin have a new portfolio?

Against the background of numerous aggravated conflicts and contradictions, Vyacheslav Volodin may not return to the Duma in the autumn session. Where will he end up next?

Yesterday, July 6, the spring session of the State Duma of the Russian Federation ended. The deputies went on summer holidays, although in such a difficult time the holidays are more of a nominal term. But some people may not return to parliament. According to sources of The Moscow Post, such a fate may await the seemingly most stable Duma - the speaker of the lower house of parliament Vyacheslav Volodin.

Information that Volodina could "leave" appeared before. But now - through several channels at once. And trust in it is greater for a simple reason - in the life of the country, in all its spheres, tectonic shifts occur.

Against the background of a special operation to protect Donbass, economic turbulence and colossal external pressure, a gradual restructuring of the political layouts inside the "black box" of the Russian political system is taking place.

Speech about the end of Volodin's political career does not come from the word at all. As one of the capital's political scientists noted in a conversation with The Moscow Post, the fact is that Volodin, with all his disadvantages, is an extremely experienced official and manager.

And now the personnel bench in the Russian Federation, let's say mildly, is not very long. I.e. Volodin may close one of the more problematic areas for the Kremlin. The State Duma is not for the authorities (including thanks to Volodin).

Where it came in handy

If Volodin's possible departure is not a duck, then there are not so many serious options where he may be useful. Among them, the governorship is called in one of the key regions of the Russian Federation. Perhaps even in the Moscow region, where the negative against Andrei Vorobyov has long been breaking all records.

However, experts consider Volodin's transfer to work in the Presidential Administration the most likely. That is, where in the past he was able to prove himself in the best way.

Recall that at the end of December 2011, Volodin became the first deputy head of the Presidential Administration. From there, he came from the post of head of the Government Apparatus - also a huge position in terms of administrative capabilities.

Here you need to explain something. In terms of its real capabilities, the position of deputy head of the Presidential Administration is no less, and maybe more, than the head himself. And we remember very well that from 2011 to 2016, the head of the AP was Sergei Ivanov, the former Minister of Defense.

However, in fact, Mr. Volodin really had key powers. And Ivanov was, in fact, a "wedding general." The latter fell into disgrace after he began to show presidential ambitions ahead of time.

Now the alignment is similar. The head of the Presidential Administration is Anton Vaino. The official is experienced. But do you often hear of him as a powerful center of influence? No. But his deputy, real equipment heavyweight Sergey Kiriyenko is constantly at the center of the political agenda. Recently, Kiriyenko has been working very closely with the authorities of the Donetsk and Lugansk People's Republics, and has already been in Mariupol and other liberated cities.

In certain circles, Kiriyenko is referred to as "Sislibs," they consider it too soft for the conditions in which Russia found itself today. However, he showed himself well during visits to the DPR and LPR. And he can be completely switched to work on interaction with the Republics.

Whereas to control political processes within Russia, an experienced functionary is also needed. And at the same time tough. Volodin does not take rigidity, but in experience he is quite comparable to Sergei Vladilenovich.

At the same time, Volodin is a politician, although experienced, but very conflicted. According to Versiya, during his five years in the AP, he managed to quarrel with many influential people, for which he received a bad nickname for his eyes.

Allegedly, Vladislav Surkov and another first deputy head of the Kremlin administration in charge of information policy, Alexei Gromov (still in his place), and now the former head of the presidential administration, Sergei Ivanov, treated the current speaker without much sympathy. He also had friction with representatives of law enforcement agencies: it is easier to list those with whom there were no conflicts.

Recently, several conflicts along the party line with his participation have escalated at once. The most famous is with the Secretary of the General Council of the United Russia party Andrei Turchak. The essence is quite simple: in the party, Turchak is the actual leader of Volodin. But the latter, as the head of the State Duma, is higher in his capabilities and authority than one of the party leaders.

This contradiction generated tension. It entered a new round just against the background of the SVO for the defense of Donbass. The reason was the reaction of the State Duma speaker to Turchak's visit to the DPR, specifically to Mariupol. By the way, Kiriyenko and many other officials were there with him at the same time.

For some reason, Volodin did not arrange such a visit. He, apparently, considered that Turchak was gaining political points, instead of doing real work in the Russian Federation along the party line. Including, within the walls of the State Duma, this is a hint of deputies from the United Russia who traveled with Turchak.

He answered even more harshly, issuing a passage about "officials who broke away from reality," "sitting their pants in comfortable chairs of the presidium." In whose garden it was a stone - do not explain.

Then Volodin again, at a meeting with party members, said that "voters who voted for State Duma deputies pay money for their work, and not for them to "deal with their own agenda." RBC quotes the words of the State Duma speaker. 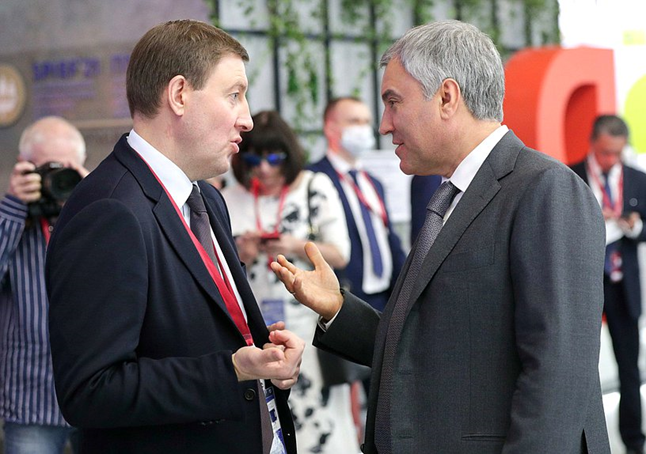 Contradictions between Andrei Turchak (left) and Vyacheslav Volodin will lead to the resignation of the latter? Photo: duma.gov.ru

Apparently, the Kremlin was extremely unhappy with the situations. Moreover, indirectly it concerned the situation with SVO - a topic extremely sensitive, for Russia - strategically, even existentially important. You can remove this contradiction in two ways: remove either Turchak or Volodin from your posts. The only question is - to increase or decrease?

There are rumors, allegedly Khabirov is going to return to the AP. At the same time, the latter is clearly not eager to work and interact with Vyacheslav Volodin - including in the rank of speaker of the State Duma.

From 2009 to September 2016, Khabirov was Deputy Head of the Office of the President of the Russian Federation for Domestic Policy. He worked under the leadership of several heads of management - Oleg Govorun, Konstantin Kostin, Oleg Morozov, Tatyana Voronova. That is, Volodin was not directly subordinate to the current head of Bashkortostan. But Khabirov was then the deputy head of the AP, which we talked about above - that is, he had real powers in his hands.

In this sense, if they want to return Khabirov to the AP, where Volodin's influence is still strong, it would be beneficial for him to be sent to a completely different job.

Meanwhile, Volodin's influence is no longer the same as before. After all, Sergei Kiriyenko, barely came to Staraya Ploshchad, began to "clean" the ranks from his appointees. Then, in 2018, after Volodin, the head of the key department of internal policy Tatyana Voronova and her deputy for the information block Olga Sitnikova moved to the Duma. A little later, the curator of the State Duma from this department, Sergei Smirnov, lost his post. 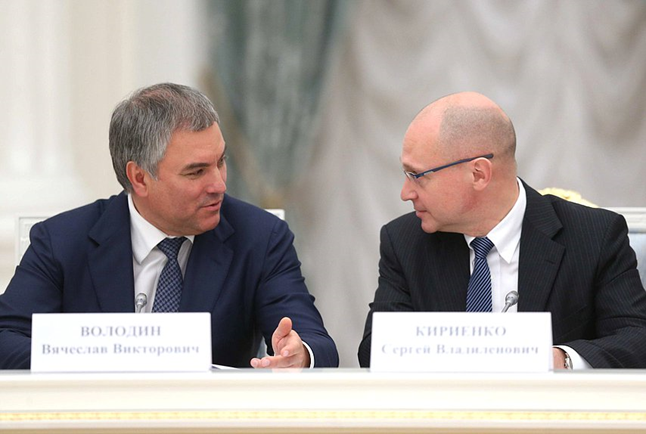 Will the AP withstand two such heavyweights under one roof? Experts doubt. Photo: duma.gov.ru

After the reduction of hardware capabilities continued. Pavel Zenkovich, head of the public projects department of the presidential administration, resigned. Volodin and his man lost at the post of the Federal Agency for Youth Affairs - Sergei Pospelov. He also went to work in the State Duma Apparatus.

Such losses, even taking into account the influence of Volodin in the State Duma, are very difficult to replace. But you can replace everyone. Including Volodin himself as speaker, regardless of where he will be in the future.