Who is "redder": Rashkin against Afonin

A struggle has unfolded in the Communist Party for the place of the head of the party, Gennady Zyuganov, but the main candidates are so "good" that let Gennady Andreevich sit in the chair of the head of the Central Committee for another couple of years.

According to the correspondent of The Moscow Post, a real battle is unfolding on the sidelines between the mastodons of the federal list of the Communist Party. A video appeared on the network that depicts people similar to the first secretary of the Moscow city committee of the Communist Party, State Duma deputy Valery Rashkin and the former head of the Irkutsk region, as well as communist Sergei Levchenko.

With voices similar to the same "fighters" for a bright communist future, the interlocutors discuss which "sweetheart" to arrange for the deputy chairman of the Communist Party Central Committee, Yuri Afonin. The latter is considered one of the most likely successors of Gennady Zyuganov at the head of the party. It seems that the action takes place somewhere in 2020. If so, then the coronavirus restrictions of the interlocutors do not bother at all.

In the recording of the conversation, which can be found on the REN TV website, completely out-of-date things sound. "It was probably necessary to try to influence the party, turn more radically, because Yura is not capable of this in principle," a person similar to Levchenko to the conditional Rashkin said.

True, it is not clear what radicalism should be expressed. Communists of the early 20th century, for example, wanted to inflate the "fire of the world revolution." Their ideological "ancestors," People's Volunteers, were engaged in completely bad things. In our case, perhaps we are talking about the more radical requirements of the Communist Party of the Russian Federation to allocate additional state powers for "red" officials and increase the federal party "rations."

It seems that some in the Communist Party of the Russian Federation do not give rest to the happiness of Gennady Andreevich, who deftly, in a communist way, privatized the former state office in the "Snegirs." FLB journalists wrote about that funny story, but in the conversation of two unknowns on the video, another struck more.

To find "sins" behind Athonin, the interlocutors are even considering the option of appealing to oppositionist Alexei Navalny. "Yes it is possible, it is possible. Because you have to do something. What about real estate? We have to do it! (...) Then you need to look at it as much as possible... and there are declarations, "they discuss.

Yes, yes, the very Navalny who recently finally received the first real prison term. Who else could distinguished interlocutors attract to the discrediting of a famous party member? A thief in the law of Shakro the Young? British intelligence МИ-6?

All this would be ridiculous if it did not concern our country. According to our sources, if this video is genuine, then no one else could order its "drain" into the network, like the deputy chairman of the Communist Party Central Committee Yuri Afonin himself. And just in the framework of the struggle for the chair of the future head of the Russian Communist Party.

The fact that changes are coming in the party was not heard only by the lazy. The head of the LDPR, Vladimir Zhirinovsky, also known for his ideological principle, even suggested that Zyuganov recuse himself at the next party conference, which should approve the leader - and he allegedly agreed. Later, Zyuganov categorically rejected this, calling it gossip, wrote Lenta.ru.

Is Athonine stepping on his heels?

So, what do we have? The aging leader of the Communist Party of the Russian Federation, who could not get to the top of power, but settled perfectly within the framework of the new Russian "nomenclature" reality, and two allegedly "hungry" opponents to his place - Rashkin and Afonin. Yes, and which - one more than the other!

If the initiator of the "drain" is Afonin, then you should start with it. At one time, according to our sources, Yuri Afonin was allegedly brought into big politics by the former governor of the Tula region Vasily Starodubtsev, a former member of the State Emergency Committee. He really was a communist, without quotation marks. However, they say that later Afonin did not appreciate his support, and could support his opponent Vladimir Gruzdev.

Moreover, there were rumors that Gruzdev could support Afonin - even with money for the elections. Allegedly, for the loyalty of the Communist Party cell in the region. This is true, or not, but special criticism of the authorities from Afonin neither against Guzdev, nor against, then, Dyumin was not heard.

Today, Yuri Afonin does not hide his political ambitions and has already begun to actively put his functionaries in various areas in the Communist Party. Given this, the successor will be chosen with a bunch of scandals. 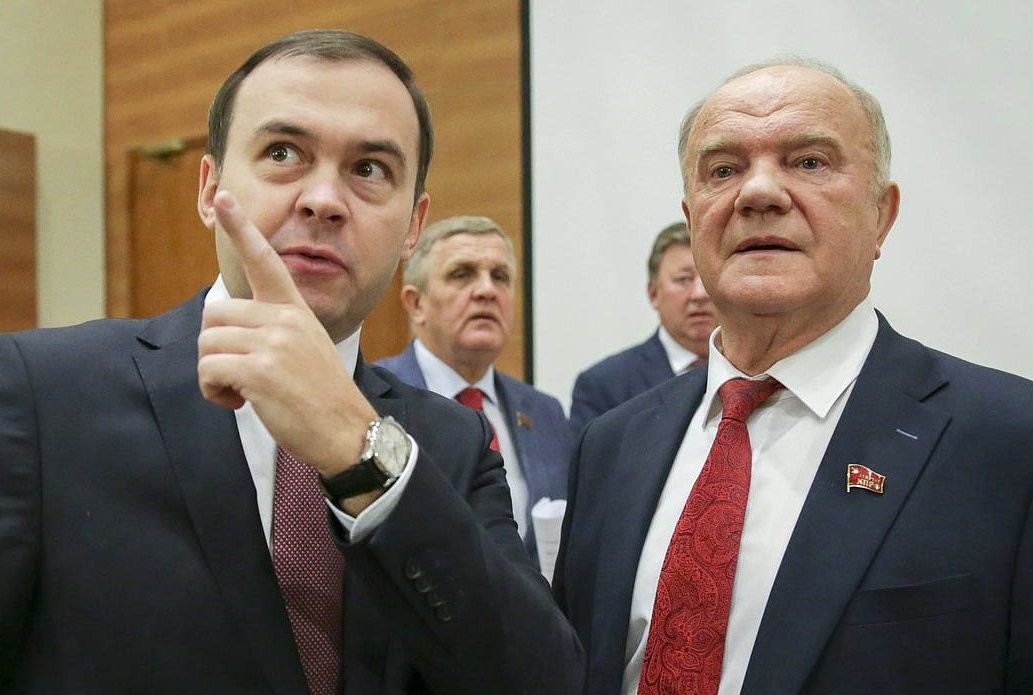 According to Profile, the struggle is already unfolding: three district committees in the Leningrad region, in the Vsevolozhsk, Vyborg and Tikhvin regions, are at once "rebelling" against the appointment of the head of the Leningrad regional committee of the Moscow Region Komsomol Tsarikhin, who is the creature of Afonin, who has shifted to promote his frame popular and very authoritative in the region

Interestingly, the journalists of "Profile" without bills call what is happening there "raider seizure of the party." And if the clinch of Afonin and Rashkin exists, then who, like not Rashkin, could contribute to such a development in one of the most important areas of the country for the communists?

Meanwhile, the apparatus of the comrade himself (well, not the master? Gentlemen - in Paris) Athonine can significantly "trim" his political ambitions. Apparently, within the framework of the famous thesis "loot loot," one of the closest associates of the deputy chairman of the Communist Party Alexei Shikhirin fell for extortion from a businessman.

In 2020, he was sentenced to 5.5 years in prison. About this wrote RIA Novosti. The reception "burned" Shikhrin is not alone - together with him in the same case, the deputy heads of the Public Initiative Foundation Pyotr Khromov, and Oleg Tushkov, a member of the same foundation, passed. Moreover, the publication also calls Khromova "assistant deputy" - apparently, we can talk about the same Afonin.

Apparently, other significant "public initiatives" in the Communist Party are not thick now. Well, the time is difficult, you also need to understand. However, there are initiatives, however. According to the authors of the AIS website, allegedly in November 2020, the Office of the Investigative Committee for the Krasnoyarsk Territory and the Republic of Khakassia received a statement from deputy Viktor Menzhurenko, who accused the Khakass re-division of the Communist Party of forgery and forgery of his signature under a collective statement.

Experts were quick to attribute the role of the inspirer of this collective "action" to State Duma deputy Yuri Afonin. So it is, or not, but he "manifested himself" - loudly and publicly supported the signatories in an promptly published interview. About this wrote IA Khakassia. Now law enforcement officers have to figure out what really happened - forgery, false denunciation, something else? There is no clarity.

If Rashkin is actively working against Afonin, then he himself would be impeccable. But he only seeks it. And if Afonin's assistant was detained for trying to extort 100 thousand rubles, Rashkin's people have a much wider scale of thinking.

According to FLB, back in 2019, the assistant head of the Moscow Communists, Arthur Schleicher, previously known as Arthur Sarkisov, was charged under article 154, part 4, of the Criminal Code of the Russian Federation - fraud on an especially large scale. According to law enforcement officers, Schleicher could be appropriated (within the framework of "revolutionary expediency," presumably?) Immediately by 86 million rubles. 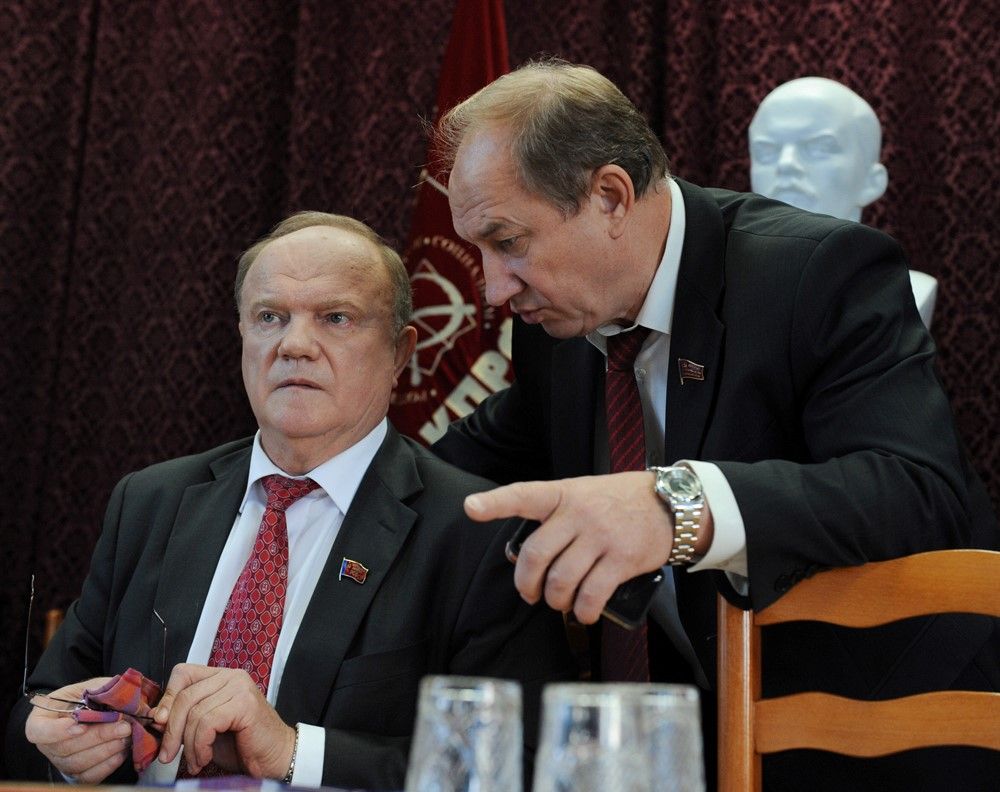 Earlier, Schleicher headed one of the construction departments of the Oryol region (owned by the state). According to the investigation, the suspect from March to July 2016 entered into a criminal conspiracy with the leadership of the state-owned JSC Oryolgorteploenergo. Schleicher, allegedly having no intention of returning funds, concluded with the general director of the specified organization agreements of a targeted loan for the completion of social facilities, as well as a number of agreements for the repair and reconstruction of enterprise facilities.

All this still needs to be proved, but it turns out very awkwardly - Communist Party statesmen may be involved in fraud with budget money. It is unlikely that Lenin and Stalin, who are so ascended by the current Communist Party, would approve of such behavior.

Does not approve of such behavior, for sure, and Rashkin. And, according to rumors, he very much disapproves of those who are not in step with him. Already in 2021, Dmitry Loktev, a Moscow City Duma deputy expelled from the Communist Party faction, asked the prosecutor's office to check the leadership of the Moscow city party committee for organizing a corruption scheme to withdraw funds from the budget of the capital's parliament. About this wrote Kommersant.

He believes that the head of the city committee Valery Rashkin committed acts falling under the Criminal Code article on fraud, according to which another deputy from the Communist Party Oleg Sheremetyev was previously convicted. Of course, Rashkin saw this as the "hand of the authorities" who are trying to "quarrel the opposition." But something too many corruption scandals have already appeared, in which the surname of this comrade appears.

However, these are still flowers - what are only rumors spread by ill-wishers that Rashkin himself could previously lead a close acquaintance with members of various organized crime groups. Earlier on television there was information that spoke about the alleged ties between Saratov criminal authorities and the deputy. The authors claimed that among Rashkin's assistants there are immigrants from Saratov groups. About this wrote Life.

I would not like to immerse readers in details - anyone who wants to, will look himself. But we will ask the nervous ones to move away from the screen - there are shots of murders, and beatings, and everything, anything. Rashkin's reaction to such studies is unknown. However, there is no real evidence of what it says - otherwise how could he still remain in politics? There are no complaints from the security forces against him!

To him, Rashkin, detractors are trying to attribute the role of the "roof" for the "Novolokinsky" organized crime group, which later seemed to be transformed into the Astek-S company. Frankly, we do not believe in this, but there are rumors that a company with this name in the past could transfer money to the Rashkin candidate fund. Yes, so much that, they say, would be enough for a possible forgery of voter signatures to start a political career.

In summary, the bright communist future for our country is again greatly postponed. What the party has turned into in recent years is generally incomprehensible. We have already said about Afonin and Rashkin, but there was also a scandalous head of the state farm Pavel Grudinin (now non-partisan), and many other "communists." It seems that the only real communist in the Communist Party was only Vasily Shandybin, who passed away in 2009.

And yet, if the confrontation between Rashkin and Afonin takes place, then it is better aged, but kind and reasonable Gennady Andreevich at his cottage in "Snegirs" than such "opposing" personnel in his place.