Evidence of the involvement of Timofey Kurgin in the murder of deputy Skorochkin finds new confirmation in the Moscow City Court.

The judicial board of the Moscow City Court postponed the consideration of the appeal of Timofey Kurgin to June 8 in order to get acquainted with additional materials. This once again clearly indicates the entanglement of the case. This confusion is blurred by the defence of Mr. Kurgin.

But, nevertheless, yesterday, May 21, during a meeting of the judicial board, sensational news was heard: at the request of the court of first instance, a document came - namely, a record of an act of name change.

It became clear from him that, Teymuraz Kurgin, changed his name to "Timothy."

This news was shocking to Mr. Kurgin's defence.

Further, for most of the meeting, the court asked questions to Kurgin's representative, lawyer Anton Vorobyov. These were the following questions:

"1. What is the defamatory nature of specific information - for each phrase?

2. Why did Timothy Kurgin refuse to dispute part of the information?

Running forward, we note that the defense of Kurgin frankly "floated" especially in terms of the employment of Timofey Kurgin. And defender Vorobyov constantly stubbornly called his confidant "Teymuraz."

Apparently, lawyers from the A-ABM law office do not trust documents with stamp seals?

The correspondent of The Moscow Post understood the details.

"Old songs" in a new way

Note that the defense of Mr. Kurgin in the person of lawyer Anton Vorobyov again fell into a light stupor when the news was announced in the Moscow City Court yesterday that Teymuraz became Timofey... And what surprises are still ahead?

Thus, the "theater of one actor" continues: the "authoritative" businessman Timofey Kurgin continues to "fight" with independent journalists, although - we recall - in the Tagansky district court at the end of January 2021, the trial of Timofey Kurgin's lawsuit against The Moscow Post and Our Version investigative journalism newspaper ended: journalists won. 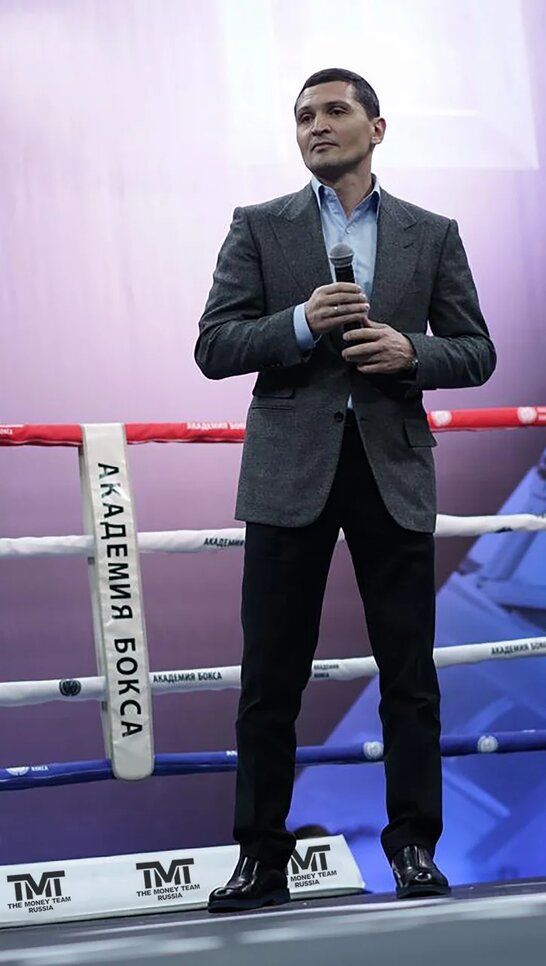 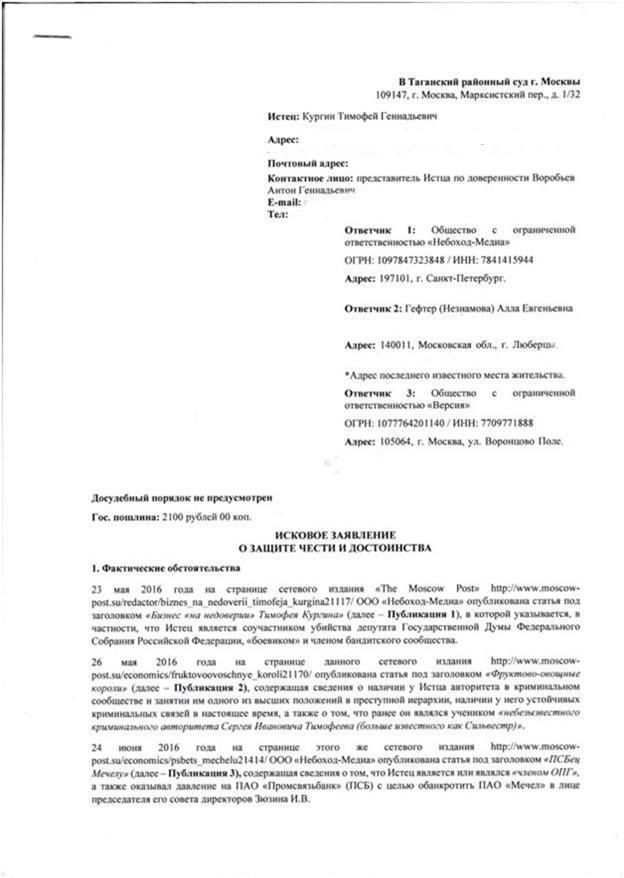 The process has been going on for almost 9 months. And all these 9 months a businessman with a very "tarnished" reputation, he - the famous boxer Timofey Kurgin - throws out more and more "knees." 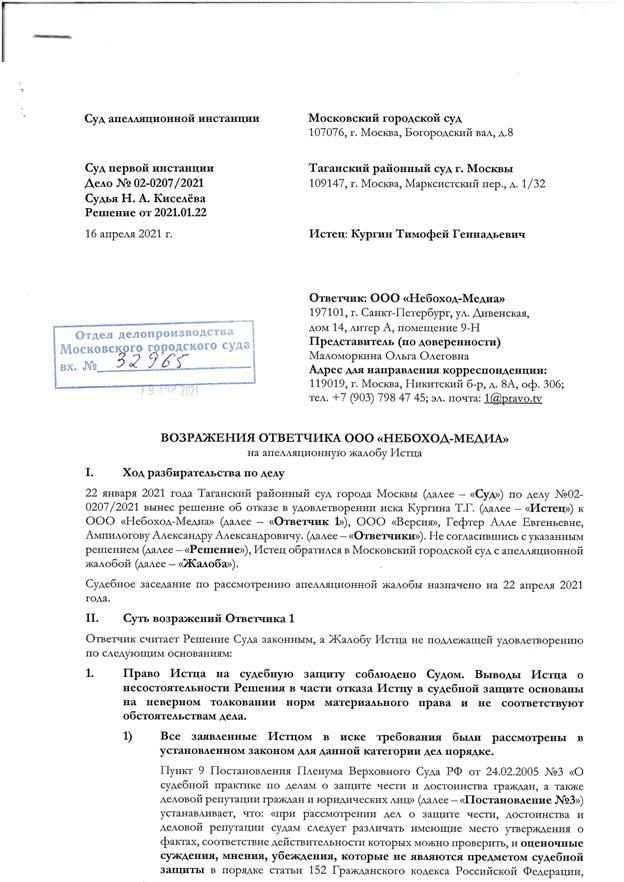 Recall that Kurgin has long been known in "certain" circles, like Teymuraz, Timur Izmailovsky, as well as Timson. Now it became known for certain that Teymuraz Kurgin for some obvious reason only changed his name to "Timothy."

And about a year ago - we recall this fact - Mr. Kurgin decided to radically change his image, get a new "past."

But how to remove the real, dark past? After all, the name of Teymuraz - Timofey Kurgin is closely connected with the murder of State Duma deputy Sergei Skorochkin, although more than 25 years have passed since then. But this fact stubbornly continues to challenge the defense of Mr. Kurgin, insisting that Kurgin received an acquittal... Kurgin's defense continues to dispute his stay in prison.

But Kurgin spent 7 years in prison. Released. And then he really wanted another life. But how to get rid of the past? Then the "wise" metropolitan lawyers from the A-PRO office hastened to help. The owner is the notorious metropolitan lawyer Oleg Popov. It was Popov and Ko who developed a certain plan.

Lawyer Popov and Ko bill for such a service is considerable, but they firmly promise to clean up search engines from unnecessary content. Like, the client himself will not even light up in court proceedings. And he will not have to refute the publications on the merits.

How many "gold" are such a service worth?

And how did it become known? 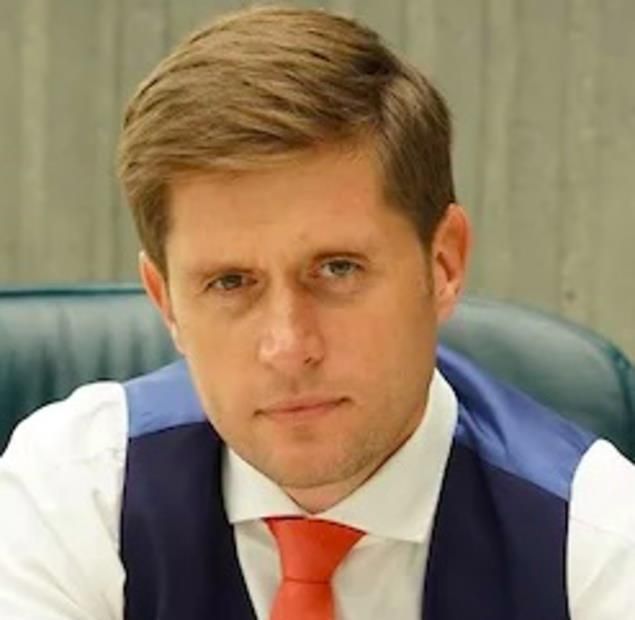 Professional journalists conducting investigations, some time ago, had curious competitors who began to use our investigations in their own self-interest. Among the victims were well-known media that specialize in journalistic investigations. And, apparently, these media would not have understood anything from what was happening behind their backs, if not for the journalists of The Moscow Post.

After the publication of one of our materials about the Pioneer group, it was published on one of the Internet resources. They came to the paper that this material violates the rights of certain copyright holders.

Then journalists from The Moscow Post noticed that some publications were on the list of a lawyer from Popov's office, Danil Pashutkin. And Mr. Pashutkin with this list began to visit the Moscow City Court. The list included investigations about the "authoritative" businessman Kurgin: thus, the operation to destroy incriminating information in the A-ABM bureau was on all "sails."

Judges of the Moscow City Court made a determination after a determination on the preliminary provision of protection of exclusive rights. This meant the automatic withdrawal of publications that Kurgin does not like so much.

A certain Dzheliev Ruslan Kazbekovich, whom Popov and Pashutkin presented as a "pen shark," was also involved in this murky case. It is as if this Dzheliev was the author of controversial materials about Mr. Kurgin. 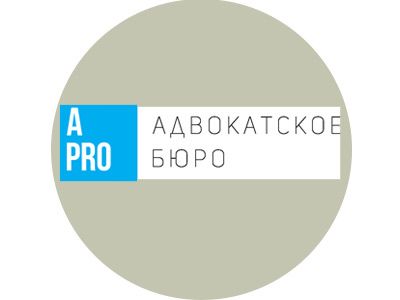 It turns out that the offices of lawyer Oleg Popov work with crime on crime? Another conclusion is difficult to draw.

Taimuraz Dzheliev has an office at the same address where the office of lawyer Popov is located in Moscow, namely, on Strastny Boulevard, 8 A. And, more interesting, Taimuraz Kazbekovich Dzheliev is also the founder of A-PRO Group of Companies.

Further, Moskvich LLC is located at the same address, in which Taimuraz Dzheliev, being the founder, holds the position of general director.

We tried to find out who the author was - Mr. Dzheliev, whom no one had ever seen. And they couldn't find a man - I'm sorry, a "pen shark" with that name!

It is likely that this character is blown.

And, apparently, lawyers and "pen sharks" Oleg Popov did not take into account the capabilities of the independent press. Blitzkrieg eventually went into the "sand."

It would seem that all "points" over all "i" were placed at the end of January this year.

But Kurgin's legal service submits documents to the Court of Appeal.

And the court again "stumbles" on some blurred facts from the biography of Teymuraz-Timofey Kurgin.

"Bombshell" from the archive

The judicial corps can be understood: the case of Timofey Kurgin is confused so that you have to understand the multilayer biography of the boxer and benefactor over and over again.

But can he send us journalists to the knockout?

It is also worth recalling that the meticulous lawyers of The Moscow Post Varvara Kuznetsova, Fedor Kravchenko and Olga Malomorkina helped the trial, which was going on for such a long time.

They prepared a kind of "bomb" for Kurgin's defenders: they found an "antique" criminal case of Teymuraz-Timofei Kurgin in the archives.

"In the archives we found about 40 volumes in the criminal case of Kurgin," says lawyer Varvara Kuznetsova, "this is what we managed to see in the public domain. But perhaps these "rare" volumes are much more! "

The case is a quarter of a century: it was 25 years old that deputy Sergei Skorochkin was first abducted and then killed. And Kurgin was then found guilty of several articles at once. The case lasted a very long time. Then the deadline expired, and Kurgin was released.

But back in February 2002, the Supreme Court in the supervisory criminal proceedings examined this case on the merits, and, according to the file cabinet of this proceedings, one of the accused in the case of deputy Skorochkin could go through no other than Teymuraz - Timofey Kurgin.

He was charged with three counts at once.

Mr. Kurgin's defence, represented by lawyer Anton Vorobyov, clearly did not expect such a "surprise." Mr. Vorobyov fell into a small lethargy. But having left this lethargy, Vorobyov, as always, resolutely stated that this could not be: Timofey Kurgin was never in the role of the accused.

But what is written in pen, they say, do not cut down with an ax?

So the Tagansky District Court agreed with the arguments of the defense of The Moscow Post and requested materials on the criminal case from the Moscow Regional Court, which was engaged in the abduction and murder of deputy Skorochkin. 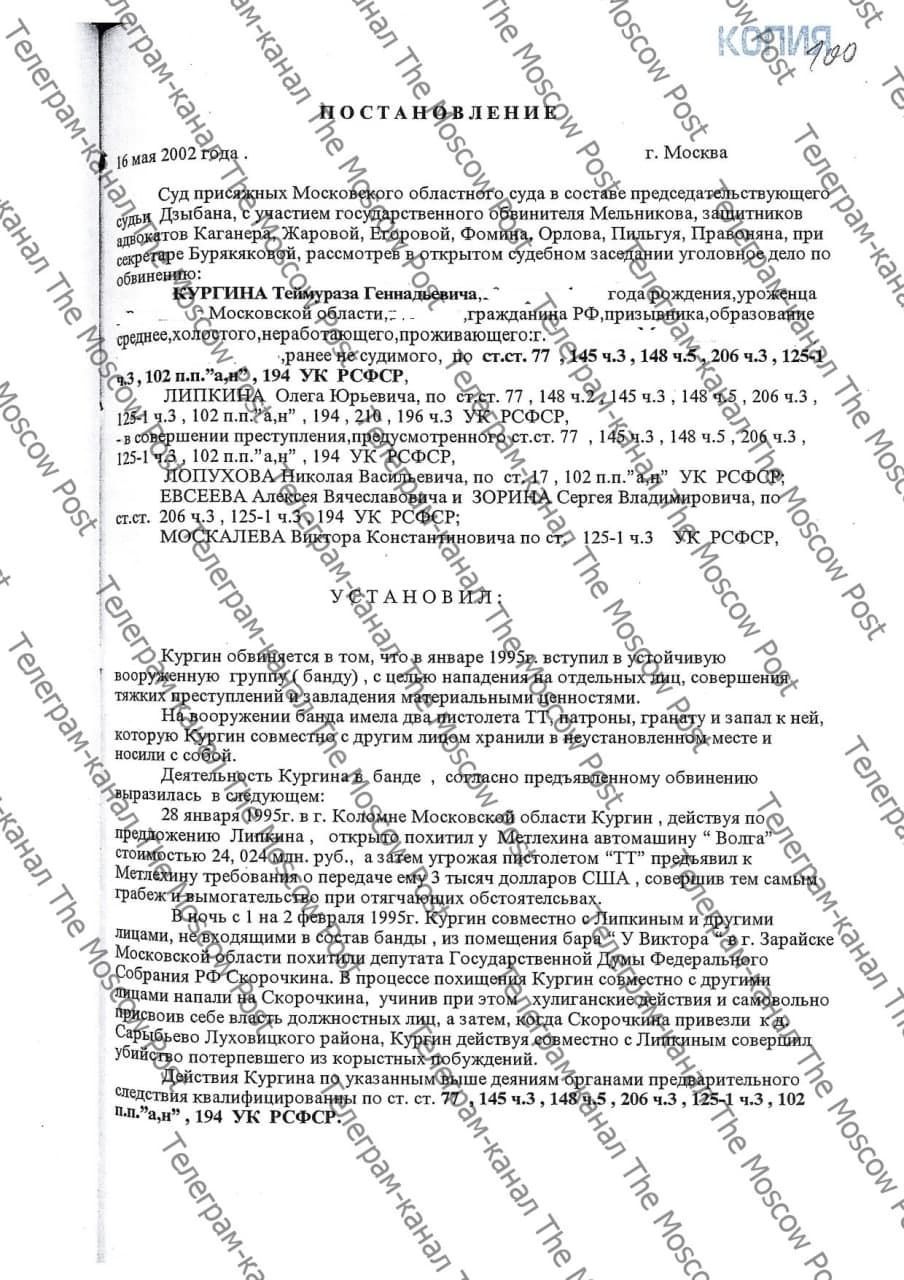 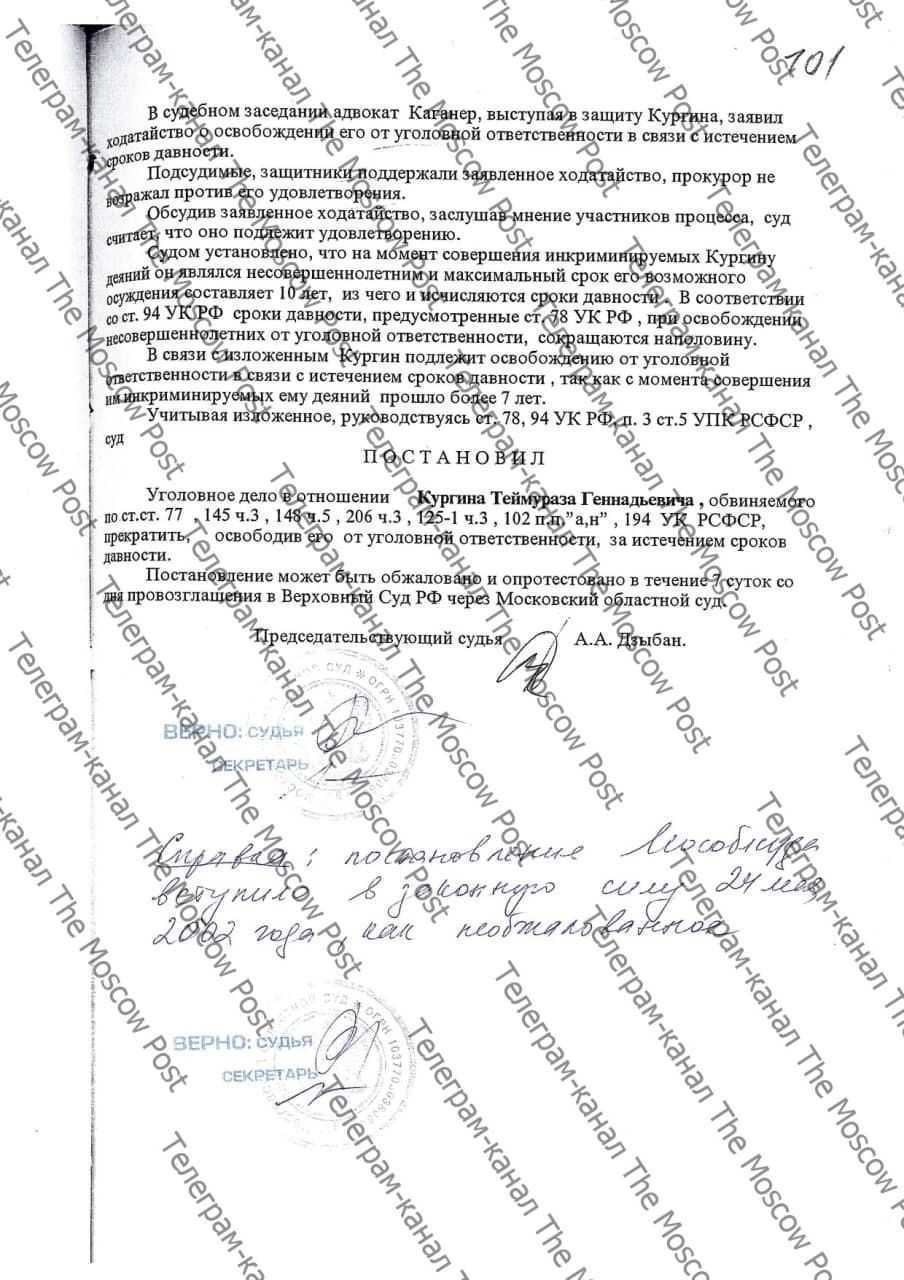 Mr. Kurgin clearly did not expect such a turnover of the case: the "surprise" from the Moscow Regional Court "shot" after 25 years!

Timofey Kurgin hoped to fully whitewash, and during the course of the "play" he turned around the affairs of long past days with a bright criminal color?

But the "surprises" for Mr. Kurgin and his defense did not end there, although lawyer Vorobyov constantly argued that the plaintiff had nothing to do with the death of State Duma deputy Sergei Skorochkin.

But the lawyers of The Moscow Post were still at their height: they asked the Tagansky District Court to attach new evidence on the topic, namely, to add earlier publications in the press - in the Kommersant newspaper and on the RIA Novosti website, as well as an SD disc with the NTV film, issue 23, "The Life and Death of Deputy Skorochkin" (19.05.2000). 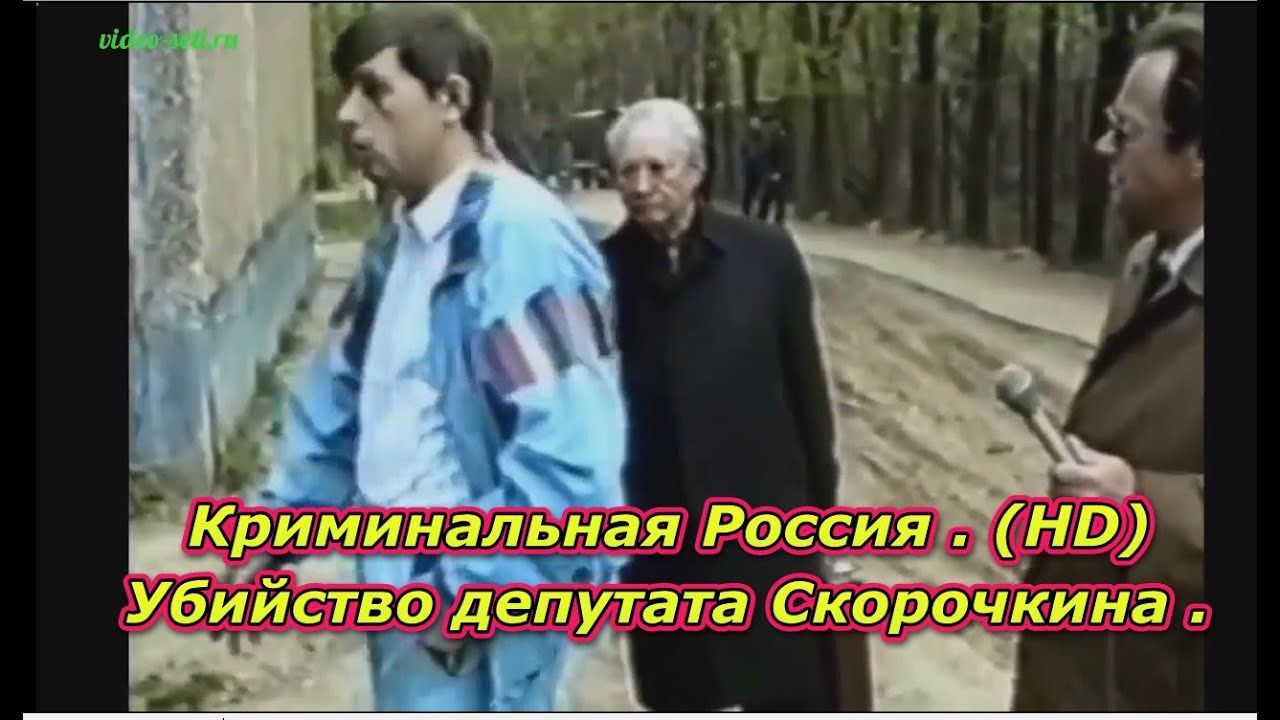 But at yesterday's trial in the Moscow City Court, the defender of Mr. Kurgin, lawyer Vorobyov, insisted that there were "a lot of staged scenes" in the NTV film. 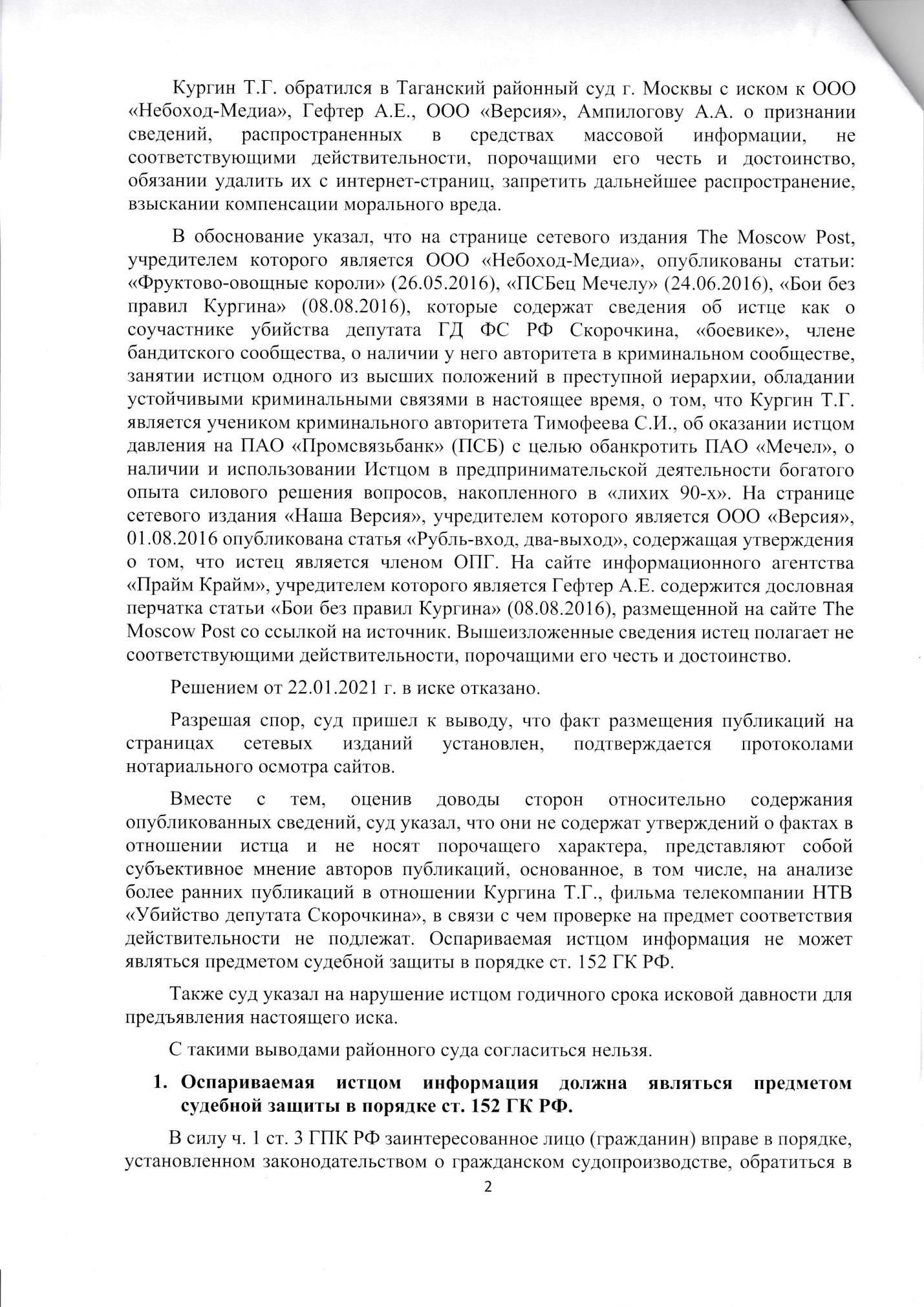 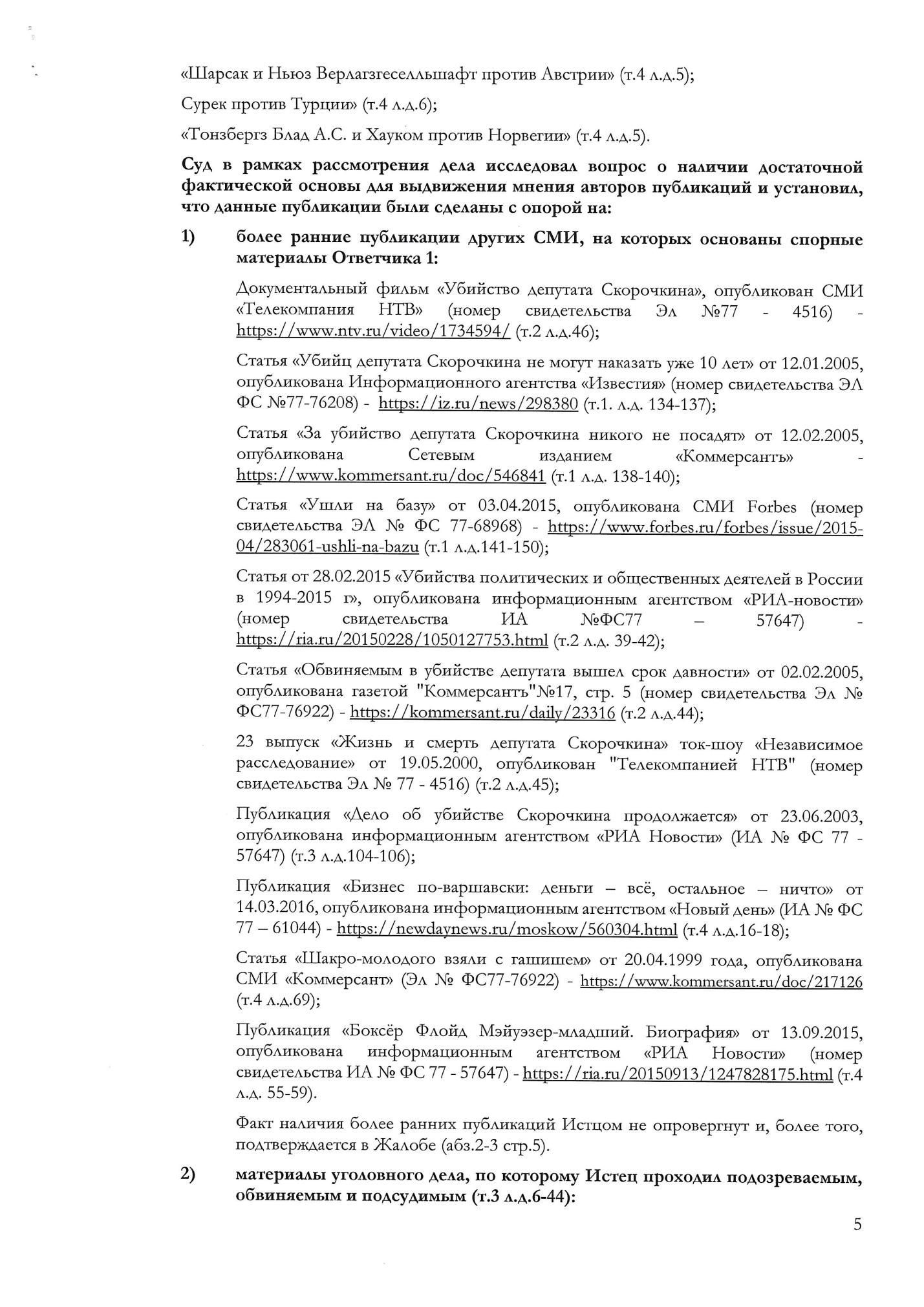 All this was established by the Moscow Regional Court in a decision of February 11, 2005. 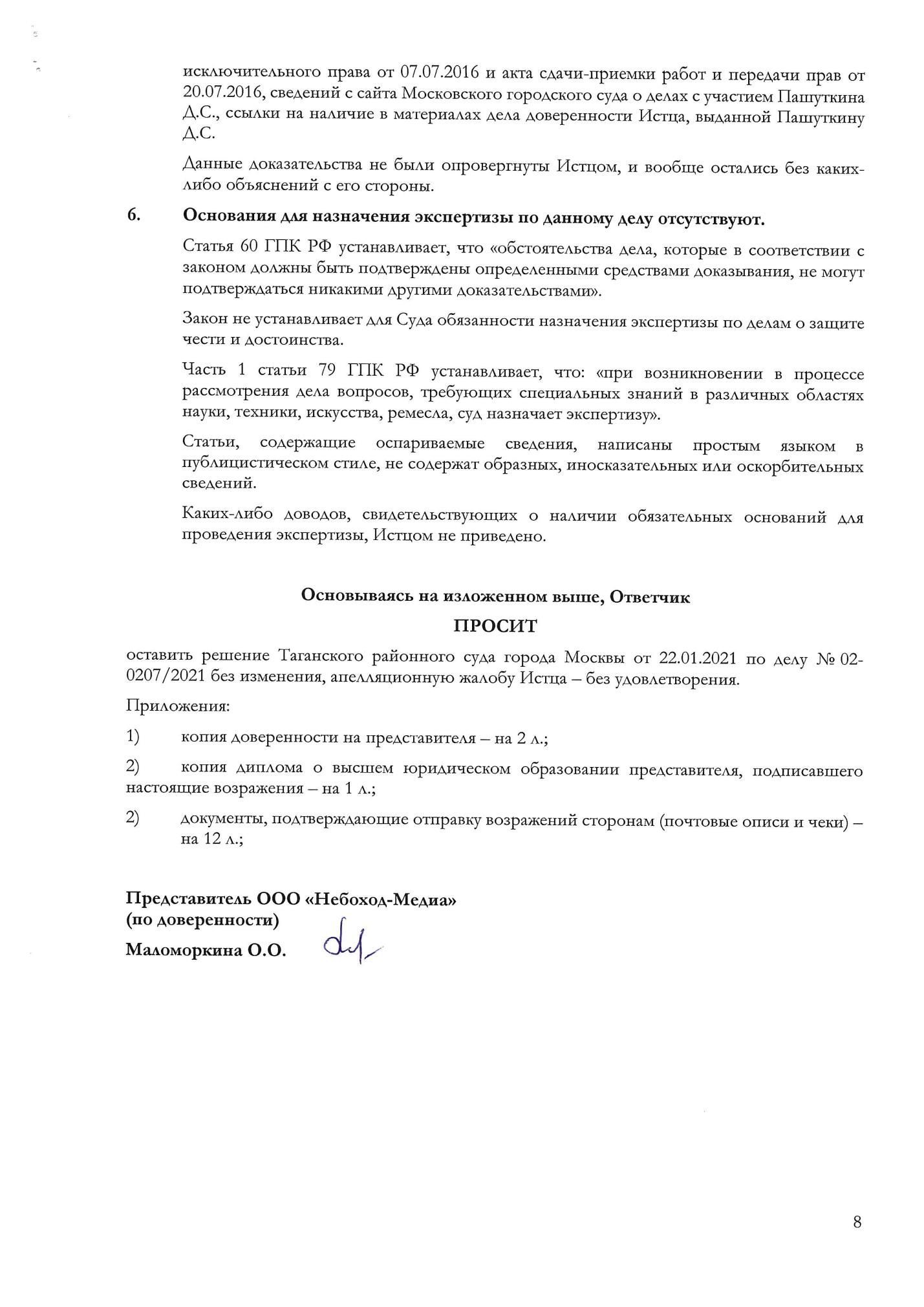 Thus, at the trials in the criminal case of Kurgin, many very small details were voiced... It is only still unclear why Teymuraz-Timofei Kurgin did not suffer punishment. And he came out of prison free...

And finally, all of us, both journalists and lawyers, heard why Timofey Kurgin had been going to court for so long. Recall that the investigations to which Mr. Kurgin has claims came out back in 2016. This was again discussed at a meeting in the Moscow City Court on May 21 this year.

As lawyer Vorobyov said, his client some time ago began to have significant problems with both foreign banks and overseas partners, since they read publications in the media about the not very "noble" actions of their business partner.

And some foreign accounts of Kurgin were blocked.

I would like to draw attention to the fact that the members of the judicial board at yesterday's meeting in the Moscow City Court three times asked Timofey Kurgin's defense about the imprisonment of their trustee. And three times the lawyer Vorobyov pretended that he did not understand the question. For some reason, Mr. Vorobyov failed to answer the question of the court fully, what exactly is Mr. Kurgin doing today?

It turned out that, mainly charity, since he heads the Plus Seven charity fund. Well, what about other positions in many types of business, including forestry? We are talking about the company "Russian Forest Group." But Timofey Kurgin also owns the elite sports club Academy of Boxing. Kurgin's lawyers, I guess they don't know?

It remains to be recalled that the next meeting in the Moscow City Court on the appeal of Timofey Kurgin will be held on June 8, 2021.