Authoritative businessman Anatoly Bykov, now languishing in a pre-trial detention center on charges of organizing murders, risks putting an end to the electoral prospects of the SRZP in the Far East.

According to the correspondent of The Moscow Post in the Krasnoyarsk Territory, new details of the nomination of candidates for deputies of the State Duma of the VIII convocation appear on the network. A day ago, the co-chairs of the Just Russia - For Truth party, Sergei Mironov and Gennady Semigin, submitted documents. The latter was previously the head of the Patriots of Russia party that poured into the SR, and unlike the bright Zakhar Prilepin, until recently he remained in the shadows.

However, according to a number of experts, it is Gennady Semigin, or rather his past and the political and business players associated with them, who pose a danger to the election campaign of the new party. We are talking, first of all, about the former deputy of the Legislative Assembly of the Krasnoyarsk Territory Anatoly Bykov and his background.

In 2016, Anatoly Bykov ran for head of Khakassia. However, according to the results of the elections, he took one of the last places, which should have hit his self-love a lot. After all, in Siberia he is very famous - he is credited with participating in the brutal criminal wars of the 90s. After that, he headed the Krasnoyarsk Aluminum Plant, and only then he began to break into the political establishment.

Each time the entrepreneur had problems with this. Now they say that the Patriots of Russia, at least its Siberian branches, and Gennady Semigin personally are the creature of Anatoly Bykov himself, who simply cannot act personally. And that's why.

Where the Tolya Bull went

Bykov was found guilty of organizing an attempted murder and illegal acquisition of weapons. For this he received 6.5 years... conditionally. About this writes RIA "Novosti". Then they suggested that law enforcement officers were frankly afraid of Bykov, who by that time had already received his famous nickname "Tolya-Bull".

Today, the passage of "Fair Russia - For Truth" to the State Duma is vital for Anatoly Bykov. After all, in 2020 he was again arrested. He is charged with organizing the murder of two persons. According to investigators, in the first half of 1994, a conflict occurred between Bykov and one of the members of the criminal group headed by him in connection with the unfair, according to the latter, distribution of income. About this writes RIA "Novosti".

The indictment on Bykov has already been sent to court by the prosecutor's office. Passing Bykov's representatives from Just Russia - For the Truth can give him additional leverage in order to evade responsibility. We can say that Gennady Semigin and the new party structure are Bykov's chance.

Bykov was a participant in the famous "aluminum wars," at least the first of them. The indirect winner in that confrontation, we recall, was not only Bykov himself, but also the young Oleg Deripaska. Some associate with Deripaska the defeat in the 90s of a large criminal structure of the authority of Vladimir Tatarin, nicknamed "Tatarin," who, like Bykov, tried to play in the aluminum market.

The times when Bykov and Tatarenkov acted in Sayanogorsk and Krasnoyarsk are called bloody in the media. Because there were regular criminal showdowns, contract killings. Moreover, the criminals, whom they tried to connect with Tolya-Bull and Tatyana, acted almost openly among the white day. As "Novaya Gazeta" will later write, persons close to Bykov were suspected of committing more than 20 murders.

Tatarenkov, although wanted, calmly traveled through the streets of Krasnoyarsk. Bykov, despite rumors about his connections with crime, successfully conducted a legal business. Earlier, The Moscow Post wrote in detail about this. But the same problem remained - political influence was needed to protect investments. And also defend against a possible new criminal prosecution. Attempts to solve this problem ended unsuccessfully for Bykov, despite all the money, connections and influence.

Bykov eventually focused on supporting the Patriots of Russia party in 2012. It is believed that Bykov's structures could finance the party through a network of "gaskets." The work of some such "pads" ended in scandal and almost led to a split in the party.

The stumbling block was the elections to the State Duma in 2016, when Semigin defeated United Russia Viktor Zubarev. At the same time, earlier Bykov and the head of the "Patriots of Russia" in Krasnoyarsk, Ivan Serebryakov, assured the top party leadership that Semigin would definitely win. After that, Bykov even wanted to create a new party "Our Siberia," but the matter did not go further than talk. Informally, he allegedly continued to support Gennady Semigin.

The reputation of the latter is ambiguous even without Bykov, and with him is still subtle. Recall the scandal surrounding the infamous developer of Krasnoyarsk "Farn-Trade," who "distinguished himself" in the construction of the elite capital new building on Kastanaevskaya Street in the west of Moscow. Farn Trade this house was never completed, and equity holders were left without apartments.

And the salt is that the company that they tried to connect with Anatoly Bykov financed the Patriots of Russia party. The deceived equity holders turned to the party leader Gennady Semigin with an open letter stating that his name was used in concluding agreements with equity holders as a guarantor of the success of the construction. About this write "Izvestia".

Rumors were also adding fuel to the fire, allegedly Semigin controls two companies associated with Farn Trade - LLC АРГО-21 VEK and LLC Arktur-Stroy. Both structures collaborated with the company even before the scandal with equity holders. Allegedly, the members of the political council of the Patriots of Russia, close to Semigin, coordinated the work on signing contracts and collecting money for housing. Moreover, the funds seemed to be accepted at 11 Smolensky Boulevard, where the Patriots of Russia branch was located.

History barely managed to hush up. But Mr. Semigin in general can hardly be reproached for principle. After all, he began his political career as a communist. Back in December 1999, he was elected to the State Duma on the list of the Communist Party. He was even a vice speaker. But then his career began to decline and Semigin changed tactics - he himself began to organize political movements. In 2004, he was expelled from the Communist Party - it was expelled. For what reasons, it is not known exactly. But in the same 2004, the Patriots of Russia appeared. Apparently, in the Communist Party he was not allowed to turn around, and he decided to go his own way.

They talked, allegedly he tried to redistribute to the Communist Party and put forward his candidacy from the party for the presidential election. But it didn't work out, and he was "asked." At the same time, he did not want to create his party from scratch. According to the authors of the site "Moment of Truth", allegedly back in 2007 Semigin was called a "raider in politics," which seemed to capture other parties and factions.

Semigin managed to persuade trade union worker Sergei Khramov to rename his "Labor Party" to "Patriots of Russia." And the post of chairman there was taken by Semigin, who quickly shifted Khramov to second and even third roles. True, when it turned out, only 19 thousand people remained in the Patriots of Russia instead of the previous 60.

An interesting detail: while still a member of the Communist Party, Semigin issued funds for regional branches of the party as loans. It was assumed that the execution in the form of loans is only a formality. However, after he left the ranks of the party, she had to deal with these debts.

The peculiarity of the loans was also that they were issued not for those persons who actually spent funds, but for the regional committees of the Communist Party. Gennady Semigin, of course, appealed to the court with a demand to get all his money back. As of 2007, the Communist Party owed Semigin another 6-7 million rubles. 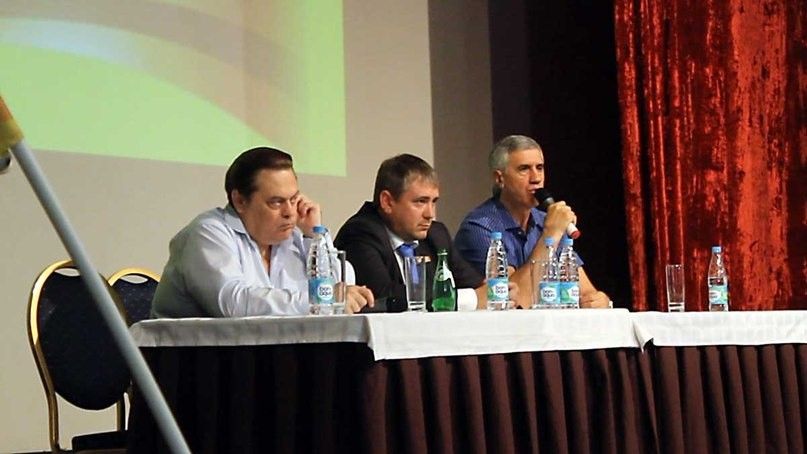 It is possible that after the possible failure of the SRZP in the elections, Semigin may also leave her close ranks. And also demand money, or even make claims on the regional branches of the structure. This does not bode well for the party. As for Anatoly Bykov, for him, who is in jail, the passage of the SZRP to the State Duma together with Semigin remains the last reliable to protect against criminal prosecution. However, Bykov's hopes may collapse as well as the hopes of voters who in the past cast their vote for the "patriot" Semigin collapsed.