Businessman Vladislav Klyushin, who is awaiting his fate in the United States on charges fabricated by American intelligence services, fears that he could be returned to Russia. Here he may have questions related to multibillion-dollar embezzlement.

As the correspondent of The Moscow Post reports, for example, Mr. "put on the waiting list" may be involved in the scandal surrounding the theft of 364 million rubles in the implementation of the contract for the repair of ticket printing machines. Here we will stay in more detail.

Russian Railways, its subsidiaries and TransTechSvyaz, with which it was associated with contractual relations, were searched in October 2020. According to investigators, in 2016, employees of the Central Suburban Passenger Company (CPPK) stole money that TransTechSvyaz was allocated to repair ticket-printing machines, RBC reported.

TransTechSvyaz, apparently, was a "fed" contractor of the CPPK: in 2016 the company received contracts from it for 650 million rubles, in 2017 - for 2.2 billion. In addition, the office collaborated with the state-owned company Russian Railways.

Despite the fact that it was over for about two years after the searches, no one was held accountable, and the contract is still under execution. Only is it being fulfilled and has the money allocated for it disappeared in the pockets of Klyushin and his "friends"? The reluctance to return to Russia in this case is quite understandable - if his trace was found, the punishment will be very, very harsh and no connections even with Shoigu himself will help here. On the contrary, the minister will rather come under attack if he tries to help an unlucky businessman.

In this situation, it is interesting that the identity of the then founder of TransTechSvyaz Anastasia Angelova is associated with Pavel Terentyev, who at that time was in charge of the CPPK information technology department. The General Gazette (archival reference) claimed (the material was subsequently deleted) that she was his sister.

And Pavel Terentyev, in turn, is listed as the founder of the "daughter" of the Klushinsky M13 "LLC" M 13 Transts, "which is now in the process of liquidation. The company is completely zero: zero employees, zero revenue, zero profit. At the same time, it was created only in the spring of 2019 and already in 2020 it was liquidated.

Obviously, the office was created for some purpose, but at some point, it seems, the plans were abandoned. Terentyev "sniffed" that law enforcement officers were interested in him in connection with contracts with TransTechSvyaz? 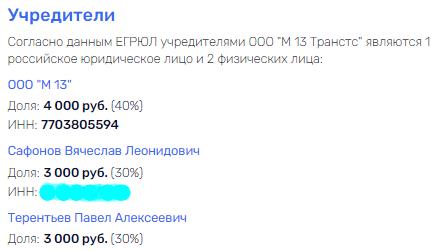 What else is funny in the whole situation - as RBC wrote the deputy general director of TransTechSvyaz already under the new leadership, Sergei Mukhin, when he commented on the entire situation with allegations of embezzlement, stated that Angelova was not a co-owner of the office at the time of the conclusion of contracts. Well, Rusprofile's data suggests otherwise. Lying and not blushing?

It is also interesting that the company has already been liquidated, and the contract is still at the stage of execution. And no one has any complaints! True, the company has a successor with the same name, but the contract, according to Rusprofile, has not been transferred to its "jurisdiction." Anyway, what was the point of closing one company and establishing another the same? Only so that Mukhin could if what is legally justified in his statements that Angelova has nothing to do with the company?

In total, Klyushin is related to eight organizations. Most of them, not counting "M 13," have completely zero financial indicators and a minimum number of personnel. I wonder why a businessman needs such a collection of "dummies"? Suspicions creep in that they may be ordinary "pads" for diverting eyes and money.

There is among these offices a certain Charitable Foundation for the Promotion of Patriotic, Spiritual and Moral Education of Citizens "New Army." What a patron! The financial position of the IT company M13 IT Services, controlled by M13, indicates that money can be withdrawn from the parent company through it. 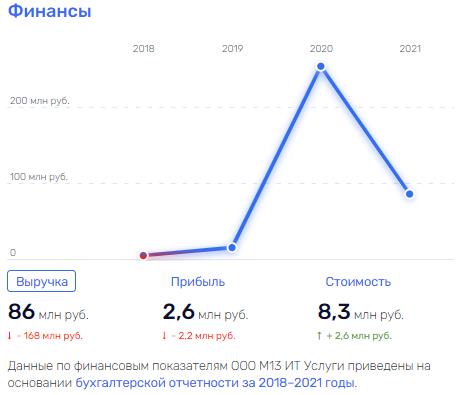 In addition, they say that through the first founder of "M13" "Luka" the money allocated for the creation of "Katyusha" was withdrawn (we are talking about the amount of about 80 million rubles). 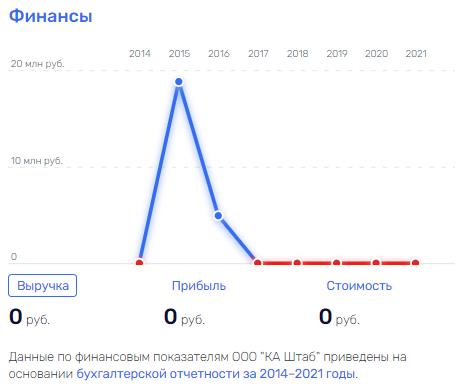 And they will not appear, because Shoigu's subordinates will not "drown" their "breadwinner"... Otherwise, in court, he can tell how he shared with the officials of the department, he can also "fly on the head."