Uncompromising you are ours: what is hidden behind the silence of the Rostov governor Golubev

While the Rostov governor has never officially spoken out about the SVO, his family is not bad at doing business - perhaps not only in Russia.

Against the background of the ongoing special military operation to protect Donbass, the head of one of the regions closest to the place of conflict, the governor of the Rostov region Vasily Golubev, is strikingly quiet.

It was not possible to find any of his words in support of the SVO. Maybe they were looking badly?

Or maybe the answer lies in another. Perhaps Mr. Golubev and his family clearly do not want to glow for the Western media, institutions and special services that make up the sanctions lists. For example, because they may have a business in the West, and the freezing of capital is definitely not included in the pigeon plans. The Moscow Post correspondent in the Rostov region understood the situation.

Such behavior of the Rostov governor, in fact, is not characteristic of him. Previously, he quite pressed on patriotism - after all, a significant part of the funds associated with him people earn in Russia. But then Golubev's "patriotism" was not fraught with pressure from Western partners.

What can explain the fact that the governor of such an important territory did not fall under the sanctions of our toughest and uncompromising British opponents? Unlike, for example, the heads of the Kursk, Voronezh, Bryansk regions, the Stavropol Territory, and many other regions.

Against their background, the "sanctionless" Golubev looks like a white raven. We are not talking about some real "combat" heads of regions - the same Oleg Kozhemyako, who visited the SVO zone, or the head of the Belgorod region Vyacheslav Gladkov, who regularly reports on measures to support people and our citizens involved in the special operation.

Or maybe the reason is that Golubev could have appeared in a strange story involving foreign business in his election company? In 2015, Big Don wrote that the head of the region received at least 2.5 million rubles from foreign legal entities. Part of the funds of 1 million rubles passed from the "RIF Trading House" which had two founders - one from Cyprus and another from the British Virgin Islands.

Another part of 1.5 million rubles allegedly came immediately from Zavod Technikol-Siberia LLC, which after a few steps turned out to be affiliated with another Cypriot structure.

LLC "Trade House RIF" is an enterprise of one of the largest Russian businessmen who are engaged in the production and sale of grain - Peter Khodykin. The "RIF" operates in the Rostov region. For what benefits could Khodykin finance Golubev's election campaign? Did he promise him something?

However, subsequently, the Election Commission of the Rostov Region reported that Vasily Golubev returned the received funds, Big Don also writes about this.

By the way, Mr. Khodykin, who was behind the offshore RIF, localized his business in Russia only in May 2022 - after the start of the SVO. And before what?

For many years, the Golubev family tried to find foreign assets and accounts. We managed to find a company in Britain LONDON CORPORATION ANALYSIS OF BIG BEN LIMITED, where the director is the namesake of Vasily Golubev's wife Olga Golubeva. True, as the network media "Southern Federal" writes, the governor's wife was born in 1957, and the date of birth of the British Golubeva was 1951. So that nothing can be said.

At the same time, the entire family of the Rostov boss in the case, including his wife. She is the founder of three organizations - Otskv-3 LLC, Stroytransgaz JSC (STG JSC) and RNS LLC. The total cost of these structures is approaching 100 thousand rubles.

Otskv-3 Golubeva left OOO in 2020, now the company belongs to Sergei Korchmidt. Since 2018, the structure has been operating with zero revenue, resembles a frank laying - 10 thousand authorized capital, the only employee.

What can not be said about Stroytransgaz JSC, which was associated with Gennady Timchenko, whose founders Olga Ivanovna was listed in 2020. 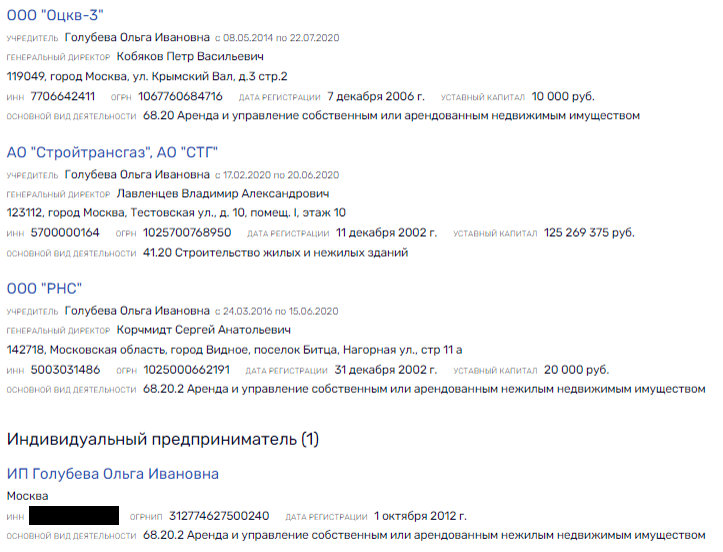 Why did Olga Golubeva "come in" and "leave" the structure? I decided to whip a little from the budget river, because as you know, both Gazprom and Timchenko have enough interests in the Rostov region?

The governor's wife also earned through RNS LLC, which is now registered with her daughter Golubeva Svetlana Vasilievna and also, probably, a close relative of Maxim Viktorovich Golubev. At the end of 2021, the structure received a net profit of 25 million rubles.

However, this may not be all of Golubeva's business. According to the publication "Southern Federal," back in the early 2000s, she owned 15% of the shares of the construction CJSC "Avangard-Stroy" (revenue in 2009 - 41.5 million rubles, net profit - 4.6 million rubles), which is engaged in the production of building structures from wood in the Moscow region.

The company has repaired objects of Mostransgaz LLC, Mezhregiongaz LLC, buildings and structures erected by Avangard-Stroy CJSC are in the Moscow, Lipetsk, Tambov, Tver regions.

At the same time, in 2009, Golubeva's income, according to the official declaration, amounted to only 17 million rubles, which Vasily Golubev himself explained by the sale of property. It's hard to believe...

But at the end of 2018, Olga Ivanovna earned 49 million rubles, while her husband only 6.7 million rubles. Something here may not be clean.

As for the Golubev children, they, of course, have been in business for a long time. We mentioned Svetlana - today the total value of the companies where she acted or becomes the founder is 350 million rubles.

Among others, attention is attracted by Investments and Technologies LLC from the city of Vidnoe, Moscow Region. There Svetlana Vasilievna - and the founder and director. And with a solid revenue of 206 million rubles at the end of 2021, the company received only 3.5 million rubles of net income. This is with the value of assets over 60 million rubles.

One gets the impression that the amount of profit there can simply be drawn in order to pay less taxes - then the tax authorities must deal with this.

The son of Vasily Golubev, Alexei, also turned around in business. Moreover, at some point he managed to become a partner with such mastodons of domestic politics and business as the family of the former presidential candidate, communist Pavel Grudinin and the scandalous entrepreneur, the former head of the Rostov Gazprom Mezhregiongaz Rostov-on-Don Ali Uzdenov.

In total, Golubev Jr. was the founder of five organizations. From 2015 to 2021, he owned shares in Constana LLC, which in 2018 received 29% in Tanais JSC. The latter is one of the largest wineries in the region., It is an asset of the former Don Bowl state farm. Over 80 hectares of vineyards, which have been created for decades by the efforts of Don winemakers and scientists. 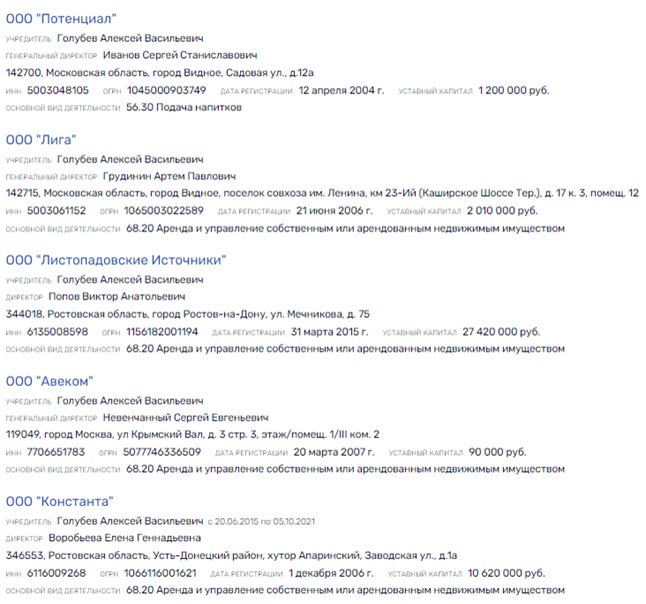 However, according to the results of Golubev's managerial activity, Constanta LLC was in a real hole. At the end of 2021 - losses of 600 thousand rubles, meager revenue. At the same time, not a single employee officially works in a structure with an authorized capital above, attention, 10 million rubles. How to understand this?

In addition, until 2019, the head of the structure was Evgeny Viktorovich Goncharov. According to evil tongues, allegedly it could be the son of the first deputy governor of the Rostov region, Viktor Georgievich Goncharov, who is now listed as the ataman of the Great Don Army, and previously headed the Regional Development Corporation.

It is easier for the children of large Rostov officials to make money together. And their dads, it turns out, are more comfortable to work together - and you shouldn't look for any nepotism here...

At the same time, the governor's son remains a co-owner of League LLC, which is engaged in real estate, and where he has 35% of the shares. His companion in it is Artem Pavlovich Grudinin - the son of the former scandalous presidential candidate Pavel Grudinin. An enterprise is registered in the famous state farm named after Lenin, which is owned and managed by a communist.

The state farm is located in the Leninsky district of the Moscow region, which was headed by Vasily Golubev for several years before being appointed to the Rostov region. In the same area is the city of Vidnoye, where the wife and daughter of the Rostov governor have business interests.

Another company where Golubev is listed as a co-owner is Listopadovskie Sources LLC. The structure is also engaged in real estate. And since September 2020, Evgeny Alievich Uzdenov, the son of the major partner of AFK Sistema Ali Uzdenov, the former head of Gazprom Mezhregiongaz Rostov-on-Don, has been in partners with Golubev Jr.

It is believed that Golubev and Uzdenov have long-standing friendly relations. And their families, too, seem to prefer to earn money together. Golubev even honored Uzdenov with regional awards. Probably, at meetings with each other, they discuss not only the future of the region, but also the business undertakings of their children.

All this is very weak with the situation that has now developed inside and around our country. With that colossal pressure from outside, the tension of all forces and means in the regions to withstand and win.

Apparently, all this noise prevents Golubev and their friends from doing what they love - making money. And a serious part of their reserves could have long been concentrated in the West. Therefore, Governor Golubev keeps quiet about the support of the SVO?