The head of the Ministry of Natural Resources of the Kuban could "warm up on the chest" of the SBU agent. If so, then in whose interests does he and his employer Veniamin Kondratyev work?

On the eve of the FSB reported on the arrest of a red-handed agent of the Security Service of Ukraine (SBU) in Krasnodar. It was reported that the agent's pseudonym was "Archie," and he carried out the initiative collection and transfer of information to the SBU. Subsequently, this information was used against the security of Russia.

In the light of recent events and the transition of the Kyiv regime to outright terror against Russians around the world, the significance of the FSB's work to curb terrorist accomplices is obvious. However, law enforcement officers did not specify the name, surname and place of work of the detainee.

According to the authors of the VChK-OGPU Telegram channel, Arthur Katrychko, an employee of the Ministry of Natural Resources of the Krasnodar Territory, as well as a close face of the head of the ministry, Sergei Eremin, was allegedly detained red-handed.

Who is Sergei Eremin and how can the presence of such a character surrounded "come back" to him - in the material of The Moscow Post correspondent in the Krasnodar Territory.

The information of the authors of the Telegram channel "Cheka-OGPU" needs confirmation, and the guilt of the detainee in the incriminated acts can only be established by the court.

Be that as it may, Minister Sergei Eremin, who is considered the protégé of Governor Veniamin Kondratyev, is a former prosecutor's worker, and people must be seen through and through. He is an almost unsinkable character - he manages to stay in office, despite the huge number of corruption scandals in his environment.

But one thing is to see the corrupt official, quite another is to have close associates of a person who works for reconnaissance of an openly enemy state. It is easy to assume that Eremin himself could be checked for involvement in working with the SBU.

It is known that a lot connects Mr. Eremin with Ukraine. For a long time he was on the territory of the Ukrainian SSR, graduated from the Kharkov Law Institute. Many graduates of the latter subsequently began to work in law enforcement agencies of Ukraine. That is, Mr. Eremin's connections on the "that side" should have considerable - and just along the law enforcement line.

But even if he has nothing to do with this story, this scandal may finally cost him his position. Questions may also appear to Veniamin Kondratyev, who will finally "surrender" his protege in order to justify himself in the eyes of the Kremlin.

Sergei Eremin has enough fame without this loud story. At the end of 2021, the court overturned the acquittal of his former deputy Nikolai Zakharchuk.

The latter was considered the right hand of Mr. Eremin. Zakharchuk was detained in May 2017, a criminal case was opened against him on mediation in the transfer of a bribe. The investigation believed that the suspect offered the head of one of the organizations to help obtain licenses for mining in two deposits in the Crimean and Primorsko-Akhtarsky districts of the Krasnodar Territory.

He was later charged with fraud and attempted fraud. Investigators believed that in 2015, when Zakharchuk held the post of FGBUP Krasnodar Reservoir, he demanded 4 million rubles from the representative of Abveliy LLC Mikhail Seryakov in exchange for creating favorable conditions for obtaining the right to short-term use of subsoil at the Puchinsky sand deposit in the Temryuk district of the Krasnodar Territory.

Note that it was in 2015 that Sergei Eremin, with the filing of Veniamin Kondratyev, took over as head of the Ministry of Natural Resources of the Krasnodar Territory. It turns out that just after the events incriminated to Zakharchuk, he suddenly went up the ranks, and as a result turned out to be Eremin's deputy.

In 2020, the case against Zakharchuk "floated" - allegedly, the testimony against him was unfounded. "Kommersant" wrote about this. 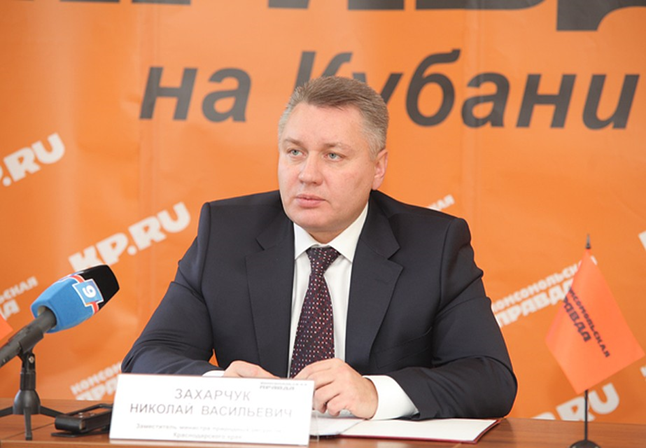 The criminal case of the former deputy Yeremin Nikolai Zakharchuk thoroughly spoiled the reputation of the head of the Kuban Ministry of Natural Resources. Photo: alt.kp.ru

According to evil tongues, allegedly Mr. Eremin, a former prosecutor of the Krasnodar Territory, could "pat" for his ward. However, if so, then the plan did not come to an end, because in the end the case was sent for a new consideration.

In the prosecutor's office, Eremin worked for a long time under the leadership of another prominent prosecutor's employee of the region - Anatoly Shkebretz, a very influential and powerful person. It is believed that Eremin and Shkebrets are in good relations. By the way, Shkebrets should be in excellent relations with Eremin's current employer, Veniamin Kondratyev. At one time, he even received an award from his hands.

The scandal with Zakharchuk, behind which the possible resignation of Eremin loomed, was also unprofitable for Kondratyev.

It can be assumed that the relationship of this trinity goes beyond purely workers. Especially with the "prosecutors": earlier both Eremin and Shkebrets were co-founders of the hunting farm of the Slavic Huntsmen KKOO. Eremin left the founders only in 2017 - when for two years he served as head of the Ministry of Natural Resources of the Krasnodar Territory. And Shkebrets - in 2019.

What can explain their joint participation in such a structure - a long-standing prosecutor's acquaintance? Or can there be some kind of corruption component?

At the same time, an ugly story is connected with the territory of the KKOO "Slavic Huntsmen," in which they tried to attribute participation to Sergei Eremin. We are talking about the case of January 8, 2019, when allegedly it was on the territory of this farm that a huntsman, a resident of the village of Convenient, was shot dead.

Until now, the circumstances of the incident are not completely clear, but this spoiled Eremin's reputation - after all, it was then that many noticed that he was part of the co-founders of the Slavic Rangers.

Various assumptions were made - up to the fact that Eremin could act as the organizer of elite hunting for politicians and businessmen of the Kuban, where many scrupulous issues could be "resolved".

Earlier, The Moscow Post also wondered what happened to the gamekeeper, and even received a lawsuit from Mr. Eremin. However, he lost the case miserably, we described this situation in detail.

The forest is chopped - Eremin is sitting in a chair

There is no evidence that Yeremin is hunting or anywhere "solves issues" with the region's elites. But the position of the head of the Ministry of Natural Resources of the Kuban itself is more than corruption-intensive. Illegal deforestation is flourishing in the region, there are many natural reserves and protected areas on the territory of the subject, from which unscrupulous business is always happy to "pinch off".

It seems that under Eremin these problems are only exacerbated. Local journalists also pay attention to the situation: not so long ago, the famous Kuban journalist and social activist Yevgeny Mikhailov shot a voluminous video where local foresters complain about bacchanalia in the forest industry of the Krasnodar Territory. And they call the name Eremin.

As follows from the video with the telling name "Miracles of the Kuban Ministry of Natural Resources," allegedly Eremin may be involved in illegal logging, hunting, dubious operations to change the status of specially protected areas. At the same time, as stated in the video, neither the usual nor the environmental prosecutor's office under Yeromin and Kondratyev allegedly do anything to stop violations of the law.

The video quotes the words of the head of the territorial trade union organization "Delo" Sergei Dultsev, who believes that up to 1,000 cubic meters of forest per week can be illegally exported from Tuapse forests. "They drive in a circle, and the forest is both stolen and stolen. Recently, they have been stealing even more!, " Dultsev says.

Another hero of the video, one of the union members Asker Kuaje, even personally traveled to the sites of allegedly illegal felling as part of a special commission. Violations were recorded, felling was recognized as illegal, but soon the technique of lumberjacks appeared there again. One gets the impression that this is almost "covered" at the very top - no one is in a hurry to fight this.

Surprisingly, such an indicative video caused a very restrained reaction from local authorities and law enforcement officers. Let's just say - there were no attempts to understand the situation, and no one asked Eremin any questions at all. Why?

Meanwhile, scandals on a forest topic with a corruption treasure have not gone anywhere. At the end of last year, it became known that the former subordinate of Eremin would be tried in the Kuban, who demanded a bribe from the director of the forestry for further promotion. "Kommersant" wrote about this.

But none of this shook the situation of Sergei Eremin. But his departure would probably hurt Veniamin Kondratyev. But if it is proved that not only corrupt officials, but also an SBU agent worked under Eremin, the conversation with both of them can go in a completely different tone. And then, probably, Veniamin Kondratyev himself will rush to the FSB to tell how he worked in the same team with Sergei Eremin.