Tram for the Sverdlovsk governor from Pumpyansky

The Governor of the Sverdlovsk Region Yevgeny Kuyvashev can give the owner of Sinara Dmitry Pumpyansky all the public electric transport of Yekaterinburg at his mercy, having received financial support in return for the election of the governor...

The Sinara group of companies Dmitry Pumpyansky became the first contender for the development of funds allocated for the renewal of the public electric transport fleet in Yekaterinburg. This was discussed at a meeting between the head of the holding Mikhail Khodorovsky and the mayor of the capital of the Sverdlovsk region Alexei Orlov.

The price of the issue is one and a half billion rubles. A billion of them, Yekaterinburg will receive from the federal budget - the result of lobbying efforts by Yevgeny Kuyvashev, who was able to enlist the support of the President. Another 225 million rubles on co-financing terms will be allocated to the city and the region. It remains to choose a contractor.

There is an opinion that "Sinar" on purpose, almost under the handle lead to a large contract. After all, the structure and its beneficiary are considered close to the head of the region, Yevgeny Kuyvashev. The Moscow Post correspondent in the Sverdlovsk region understood the situation. http://www.moscow-post.su/sverdlovskaya_oblast/

Each other needs to be helped

It seems that Yevgeny Kuyvashev is sorely lacking financial resources for his election campaign. Voting is soon, and there is still a lot of work. At the same time, the official election fund of Kuyvashev has a simply ridiculous amount of 25 million rubles in such conditions.

Given the scale of Yevgeny Kuyvashev's election campaign, who will believe that he is "walking on his own"?

It is in this situation that an old acquaintance, the owner of Sinara Dmitry Pumpyansky, may come to his aid (or have already come). But for this, Pumpyansky needs guarantees that with the newly elected governor, his group of companies will go uphill.

There is an opinion that Yevgeny Kuyvashev, allegedly, already kept in mind the Sinara Group of Companies at a meeting with the President when he asked for help with financing the renewal of the trolleybus fleet. So or not - it is not known, but after all, he showed similar concern for the structures of the group before the head of state even before that.

Recall that under Evgeny Kuyvashev, it was the Sinara group of companies that became the key contractor for the construction of almost all facilities for the Universiade-2023. Their cost under state contracts exceeds 70 billion rubles.

Everyone understands that, against the background of colossal external pressure on Russia, it will not be possible to hold the Universiade fully, and many objects erected for competitions will be unclaimed. But Dmitry Pumpyansky and his "Sinara" have nothing to worry about - earlier it was Evgeny Kuyvashev who asked for guarantees on state contracts at the Universiade for them.

The essence of the request was the possibility of JSC Sinara-Development to retain the status of the only contractor for state contracts for the Universiade.

This request was expressed by Governor Yevgeny Kuyvashev to Russian President Vladimir Putin during a meeting of the Council for the Development of Physical Culture and Sports. According to Kuyvashev, this will make it possible to perform the work of a single performer during the entire period.

He added that on behalf of the President, an order of the Government was prepared, "however, the validity period expires in 2021, and the bulk of construction will take place in 2022-2023." What is this, if not the lobbying of one, separate commercial structure? 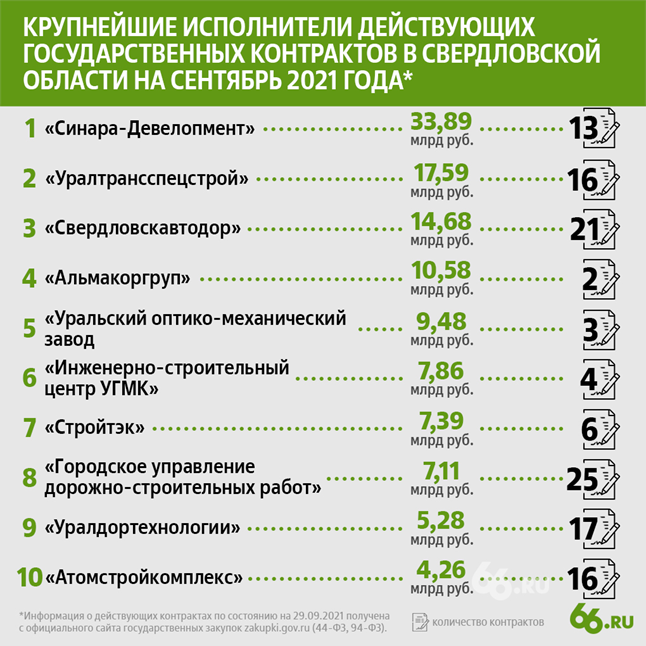 Under Kuyvashev, Sinara deployed in full in the Sverdlovsk region. Photo: 66.ru

As a result, in just a year, Sinara-Development turned into the largest state contractor allegedly, already kept in mind the Sinara Group of Companies of the Sverdlovsk Region in 2021, having received almost 34 billion rubles under contracts. But Pumpyansky and Kuivashev are not enough...

By the way, their relationship is not cloudless at all, and it is not worth calling them close people directly. As they say, business and nothing personal. In the past, they even clashed: the reason was claims to Sinara because of the implementation of construction projects commissioned by the region. One of the confirmations of this skirmish at the birthday of the ex-owner of ChelPipe Andrei Komarov, where Pumpyansky and Kuyvashev allegedly expressed claims publicly. But in the end, Kuyvashev and Pumpyansky reconciled - writes about this Ura.ru.

The same publication revealed an inside: allegedly, at the filing of Kuyvashev, the Sverdlovsk government paid off debts to the Ural football club, whose chairman of the board of directors is Dmitry Pumpyansky.

Recall that at the end of 2019, the club's debts amounted to 100 million rubles. Apparently, Kuyvashev did not find the best use for this money. And soon after that, "Sinara" tightly "entered" construction sites according to the "Universiade-2023."

Returning to transport, a separate division is engaged in its production at Sinar - Sinara-Transport Machines Group of Companies. They have already entered a number of projects in large cities of Russia related to the renewal of the fleet of trolleybuses, buses and trams.

For example, they are engaged in updating and modernizing the fleet of public transport buses as a concession in Chelyabinsk, which Alexei Orlov did not fail to recall at a meeting with Khodorovsky. The hint is obvious: if Sinara is started to update the public transport fleet in Yekaterinburg, then it is probably through a concession in order to further tie the industry to a specific commercial supplier.

However, there are enough problems with Sinara's transport projects. And this is not so much about Pumpyansky's aggressive actions in the market, when he tries to climb into any loophole, he is looking for any opportunity to sit on budget flows. But also about how it realistically fulfills its obligations.

And here there are serious nuances, which even the Moscow mayor Sergei Sobyanin drew attention to. In the fall of 2021, the Moscow Metro unilaterally terminated the contract with Trading House STM LLC (Sinara-Transport Machines Group of Companies) for the supply of tram cars for Mosgortrans and their maintenance for 30 years. Issue price - 11 billion rubles

The decision to unilaterally refuse to fulfill the contract was made "due to the fact that the supplier did not fulfill the obligation provided for by the contract to supply goods." The customer also demanded that STM return by December 15 an advance payment in the amount of 257.2 million rubles. Writes about this Lenta.ru. 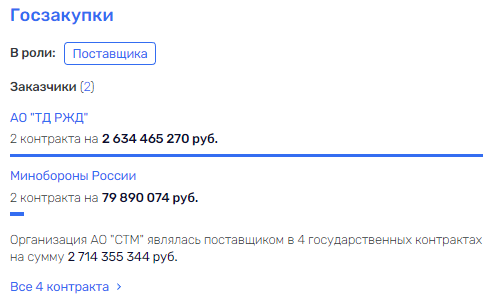 It was a huge loss for Sinara. Today, the STM state order pool is 2.7 billion rubles, and a large project in Yekaterinburg can correct the situation.

It's hard to know what happened. But if Pumpyansky's structures could thus "let down" the Moscow mayor's office and its influential leader, what problems can be expected from them in Yekaterinburg? However, there Kuyvashev is unlikely to terminate the contract with them - surely the official and the oligarch will be able to agree on a mutually beneficial basis...

Another scandal with transport from Sinara happened in 2021 in the Kaluga region. There, Sinara - Transport Vehicles pompously presented to the authorities a project to create tram production at the Kalugaputmasha site under a license from Czech Skoda.

However, then the management of the holding changed course and, in fact, misled the Kaluga governor Vladislav Shapsha, promising multibillion-dollar investments in the project at the start. Everything was revealed after checks provoked by sending false information about the Kaluga industrial site to the Ministry of Industry and Trade, an act of expertise of the local Chamber of Commerce and Industry.

In short: as a result, the Ministry of Industry and Trade refused Sinara to issue the status of a manufacturer of Russian trams. The main reason is the lack of actual production of the declared goods at the site of Kalugaputmash JSC, where Pumpyansky wanted to turn around. "Moskovsky Komsomolets" wrote about this situation. It turns out that the regional authorities led by Governor Vladislav Shapsha could have been misled.

Either way, it leaves more questions than answers. And given the former conflicts between Sinara and the authorities of the Sverdlovsk region, it is unlikely that their possible partnership in public transport will do without various incidents. 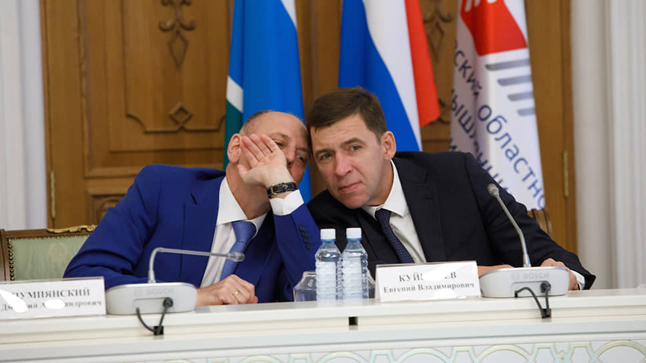 But now, when Kuyvashev has elections on his nose, such reasoning may fade into the background. After all, iron needs to be forged while it is hot, and it needs money now. Pumpyansky understands this, because instead of him the head of the region can turn his gaze to the UMMC or the same Viktor Vekselberg. So there is no doubt that Sinara and Kuyvashev will always agree.

At the same time, Pumpyansky himself has financial difficulties for a long time. For example, his yacht Axioma was recently confiscated at the port of Gibraltar at the request of JPMorgan. The management of the structure claims that the Pumpyansky-owned company Pyrene Investments owes the bank $20 million. Writes about this Lenta.ru.

So if Kuyvashev decided to "enter" the new governor's term on the Pumpyansky tram, let him first make sure that this tram is on the go...

06 September, 8:07
On the "needle": what prevents Sergei Gordeev from leaving in a good way?
See also