In the interests of Ilya Traber, several projects can be implemented in the Leningrad region, which are potentially destructive for the ecosystem of the entire Baltic.

According to the correspondent of The Moscow Post in the Leningrad region, the borders of the seaport of Primorsk in the Vyborg district of the Leningrad region will be expanded, a universal transshipment complex will be erected there. Behind the project is the Primorsky CPC, controlled by the famous businessman Ilya Traber - and this is what many see as the reason that the complex will appear, despite numerous complaints from activists and environmentalists.

And the case there, judging by their stories, is already a "pipe." The local population is outraged by the destruction of forest land: Primorsky CPC has already cut down 265 hectares of forest for the site for the construction of the port - even before the project was approved and before public hearings. The process was quite official - earlier the organization entered into an agreement with the regional committee on natural resources for the lease of forest areas of the Roshchinsky forestry for timber harvesting - however, as an ordinary logger, and not a port builder. Later, a new agreement was concluded - on the construction of linear objects in the territory where deforestation took place.

Due to deforestation, the summer residents of the village of Baltiyskoye lost the protective green zone - it separated them from the existing neighboring port in which the Transneft-Port Primorsk tankers are loaded. Residents say that the port "stank before, but it became even stronger." A scandal arose during which the head of the committee on natural resources of the Leningrad region, Pavel Nemchinov, promised that the Primorsky Code of Criminal Procedure would restore the forest in full. But it is already clear that there is no question of a complete restoration of the forest.

Earlier, The Moscow Post wrote in detail that activists complained that they were blocked by unknown people on a large black Infiniti car.

And such methods are quite in the style of Ilya Traber, who at one time conducted joint affairs with the famous authority Vladimir Kumarin (Barsukov). Now the latter, according to Business Petersburg, is serving a prison term for organizing an attempt on businessman Sergei Vasiliev, raiding and extortion.

And while one of the former partners is sitting behind bars, the other is successfully expanding its port affairs. In the area of ​ ​ the port of Primorsk, a project is being implemented to build the first deep-sea universal sea port complex in the Baltic basin. The planned investment volume so far is from 77 to 90 billion rubles (and according to some reports, all 275 billion). Ten sea berths for transshipment of coal, mineral fertilizers, containers, general cargo and grain, as well as a warehouse logistics center will be built on an area of ​ ​ 710 hectares. The total capacity is up to 70 million tons per year, of which 25 million are coal. The commissioning of the facility is scheduled for 2022.

Earlier it was reported that they will take money from investors for the construction of the project, including Sberbank and VTB. And this means that they will build a potentially environmentally dangerous project for the money of state financial organizations.

At the same time, it seems that they are trying to save here on everything possible. So Novaya Gazeta wrote that the project did not have facilities for receiving and cleaning waste from ships arriving here. And if they are not ready to endure until the next stop, they will drain "under themselves" - that is, directly into the waters of the Gulf of Finland.

And for the environment, it seems to be a really full seam. An examination conducted by activists showed that this would kill the Baltic ecosystem. And this threatens not only irreparable damage to nature, but also an international scandal, because our neighbors in the Baltic Sea will also see a great project in Primorsk. The bay may cease to be a living breath of untouched nature, there is a threat that some species of fish and plants, birds, and nerps will cease to live there. The latter, for a second, is considered one of the unofficial symbols of the Gulf of Finland. 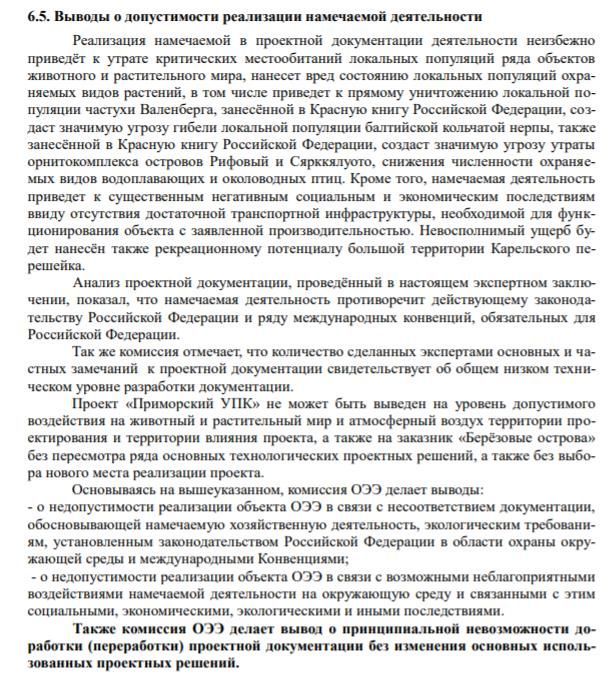 Salmon floats away... from Traber?

But for some reason it does not bother anyone especially. It is possible that once again they simply do not want to "cross the road" to Mr. Traber, who owns 31.6% in Primorsky CPC. More than 20% of the company has his long-time business partner Ramis Deberdeev. 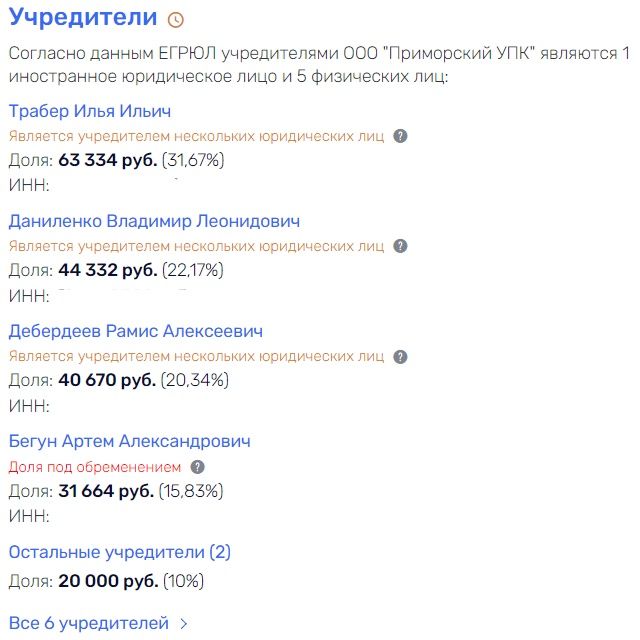 And this is in a sense nonsense - Traber is known for what seems to prefer to conduct business not himself, but through proxies. One of them is called Mikhail Skigin, the son of the late partner of Traber Dmitry Skigin. As The Moscow Post wrote in detail earlier, the latter in his interests may be engaged in the construction of a multifunctional cargo complex on Sakhalin. Moreover, to do this for a couple with Olga Khromchenko, who is considered close to the Minister of Finance Anton Siluanov.

The Moscow Post also talked about Traber's interesting connections "on the ground," in the Leningrad region. In particular, a businessman can do business through proxies, as well as relatives of the former governor of the Leningrad region Valery Serlyukov and the current head of the region, Alexander Drozdenko.

Unites presumably Traber proxies interest in ports. The entrepreneur himself has been specializing in this since the 90s. In addition to the Primorsky CPC, he can still be associated with the Ust-Luga PTC. I recall the recent story of Traber's loud "call" to Ust-Luga Sea Commercial Port JSC. Ka wrote 47news, behind the company that bought the debts of Valery Israel, is Mr. Traber.

And in this case, it seems not accidental that Israel was under arrest - the businessman was suspected of especially large-scale fraud, embezzlement and transfer abroad of more than 300 million rubles. But in March 2020, just after his shares in the enterprise were transferred to structures allegedly associated with Traber, he was suddenly released. And this is not very similar to the usual coincidence.

Traber's figure looms in another resonant environmental conflict. Last year, the government leased for 10 years a plot of land in the Lomonosov district for the construction of a grain terminal of the company to the structure of the Sodruzhestvo Group of Companies. This place remains one of the cleanest sections of the coast of the Gulf of Finland.

The allocated section is 13 km from the railway, which means that here the Traber people probably intend to destroy the forest in order to lay the necessary tracks. But in this situation, the victory was for the activists - they still managed to achieve the cancellation of the project, as reported by The Moscow Post.

But in Ust-Luga, local residents could not insist on their own: soon an industrial zone will appear there. Moreover, earlier it was even reported that the Big Port of St. Petersburg could be moved there. The Moscow Post told the story of a reader excited that he had a construction site right under his windows.

In the village of Vistino, Kingisepp district, near the port of Ust-Luga, Ultramar LLC, a St. Petersburg businessman Andrei Bonch-Bruevich, probably close to Traber, plans to build the largest mineral fertilizer transshipment terminal in the region by 2022. The total area of ​ ​ the complex (railway infrastructure, storage areas, main product pipelines and seaport) will be 200 hectares.

It is planned to build two branches of the railway and a private highway. Obviously, in this case, the forest will be completely destroyed, since it has a very small width. The second railway line will go along the banks of the Luga River. The Luga River is the last river in Russia (and according to some reports, even the whole world!), Where wild salmon spawn.

Some facts indicate that Traber can conduct cases in a very specific way. Recently, The Moscow Post spoke about the proceedings around Axel Groups, whose structures were taken over by Traber and Deberdeev. The founder of the company, Alexei Bezobrazov, filed a lawsuit against new partners in order to weaken their influence in the group and, possibly, out of a desire to prevent it from being squeezed out of business.

All this very foldably falls into the heath of rumors about Mr. Traber's difficult past. And although there is no direct evidence that he himself was engaged in something illegal, his former friendship with the famous authority Kumarin gives excellent ground for various kinds of gossip.

And, judging by what situations are unfolding now in Primorsk and Ust-Luga, a businessman can really sacrifice something to achieve his goals. And in this case, the ecosystem of the Gulf of Finland, or even the entire Baltic, falls under the knife.