Timofey Kurgin turned on the "spill"

Timofey Kurgin, an accomplice in the murder of State Duma deputy Skorochkin, is trying to put pressure on the media.

Timofey Kurgin turned on the "spill"A long confrontation in court between the "authoritative" businessman Timofey Kurgin and journalists represented by The Moscow Post and the newspaper Our Version ended. The requirements of the Moscow City Court on the part of our publication are fulfilled in accordance with the Appeal Decision, namely, the information recognized as defamatory is deleted. But the lawyers of the entrepreneur work out their fee at full - even after.

What motivates such "attacks" on journalists Timofey Kurgin and the legal office "A-ABM," the correspondent of The Moscow Post tried to understand.

Recall that the texts to which Kurgin made claims were published back in 2016.

And first, the Tagansky district court sided with journalists.

However, Kurgin's defense appealed, and as a result, a small part of the information contained in the texts was considered unreliable. From other requirements, namely, that "in the 90s Kurgin first" lit up, "as a defendant in a criminal case. Murder cases. And not someone, but a deputy of the State Duma. In those days, Timofey Kurgin was known in certain circles as Timur or Teymuraz, "Kurgin refused himself. The Moscow Post complied with the court's requirements and removed information recognized as defamatory from the materials. But this Kurgin was not enough.

Lawyers of the businessman began to litter our editorial office and the editorial offices of other independent media with "letters of happiness" with demands to remove recent publications - allegedly, on the basis of the Appeal Decision of the Moscow City Court. But, here is the misfortune: in these articles there is no information that is prohibited for further distribution and was recognized as unreliable, defaming the honor and dignity of Kurgin. 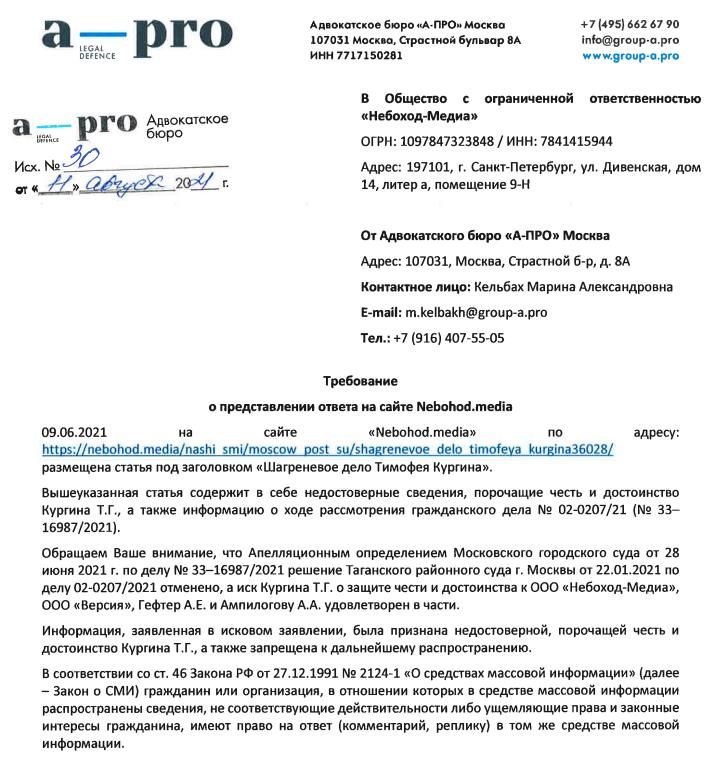 The requirements also apply to English-language articles of The Moscow Post. In response, the lawyers of the publication have already requested a notarized translation of the text in a foreign language by a qualified translator.

Kurgin's desire to "clean up" information in a foreign segment of the Internet where The Moscow Post broadcasts on behalf of Russian state authorized organizations is also understandable - earlier lawyer Anton Vorobyov, who defended the businessman in court, said at the meeting that his client began to have serious problems with foreign banks, and with foreign partners, as they saw in the media publications about the activities of their client and business partner.

But, recall, the information that allegedly dealt an irreparable blow to the reputation of Mr. Kurgin is no longer public, it is not on the website of The Moscow Post. But the businessman tries to remove all references to his person on the pages of our publication.

The motivation is clear. In recent materials, journalists talk about Mr. Kurgin's political activities, lawsuits, partners and criminal past.

By the way, the last fact of the judicial board recognized valid. Lawyers for The Moscow Post provided evidence that the now successful figure was previously associated with the story of the murder of State Duma deputy Sergei Skorochkin. 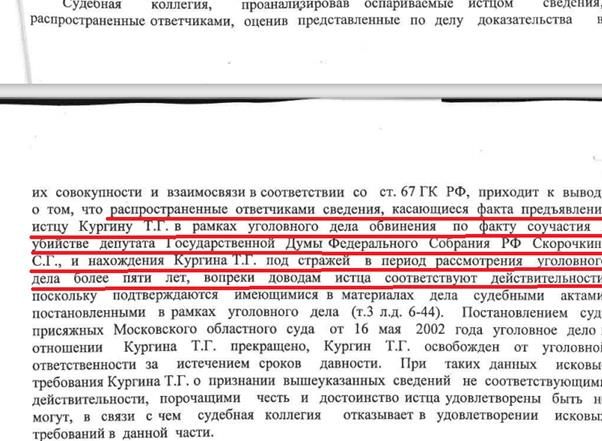 In the archives, lawyers found about 40 volumes in the criminal case of Kurgin. According to the documents, 25 years ago, deputy Sergei Skorochkin was first abducted and then killed. The accused in the case was a certain Teymuraz Kurgin, who was able to avoid severe punishment due to his minor. He was then found guilty under three articles at once. The case lasted a very long time. Then the deadline expired, Kurgin was released.

Teymuraz and Timothy are the same person. 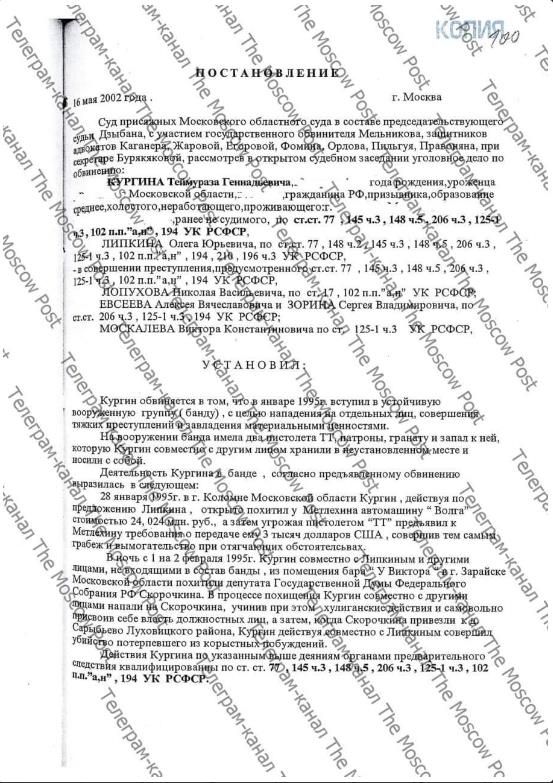 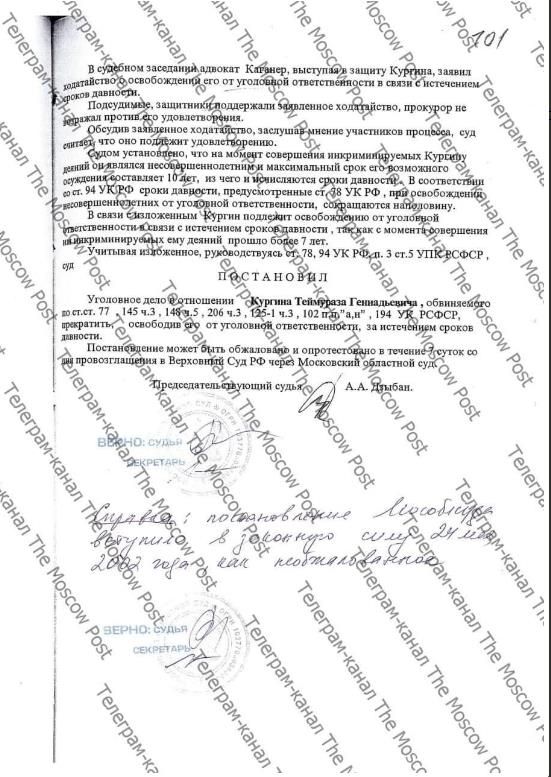 Kurgin's lawyers constantly stated that the plaintiff had nothing to do with the death of the deputy. In response to this, The Moscow Post asked the court to attach two early press publications to the case - in the Kommersant newspaper and on the RIA Novosti website, as well as an SD disc with the NTV film, 23 issue "The Life and Death of Deputy Skorochkin" (19.05.2000) and a film from the series "Criminal Russia" "How they killed deputy Skorochkin".

Today Teymuraz is Timofey Kurgin, a successful Russian entrepreneur and philanthropist. And being in prison in a murder case hardly fits into the current impeccable image that a businessman so diligently forms. And in this, by the way, he is helped by the most real professionals of his business.

The requirements to demolish new articles of The Moscow Post in packs are stamped by the "special purpose" law office - this is how they write about themselves on the official website in A-ABM. It is this firm of lawyer Oleg Popov that performs its services for Timofey Kurgin. However, these services are sometimes very specific.

Together with lawyer Danil Pashutkin, this office implements an entertaining scheme for "cleaning up" information about its clients. Namely: they find people who call themselves the authors of publications published in the media and online resources, after which lawyers file lawsuits in the Moscow City Court to protect the rights of these very false authors. Moreover, they are not sent in the editorial office, but immediately to providers, hosts and registrars. As a result: the resources themselves do not even know that proceedings are underway regarding published materials. The court almost immediately makes a determination on the preliminary provision of protection of exclusive rights, which means automatic withdrawal of publication.

And then lawyers may no longer give a move to the case. After all, Pashutkin's main goal has already been achieved: site owners receive a requirement to delete the article, delete it, and after the Moscow City Court withdraws interim measures, the editors may not find out about it.

As follows from the website of the courts of general jurisdiction of the city of Moscow, only 32 applications were filed on behalf of Pashutkin. The author of these articles is allegedly a certain Dzheliev R.K., from whom the lawyer acquired the exclusive right to articles. The same mysterious character also appears in cases with publications of The Moscow Post dedicated to Timothy Kurgin. 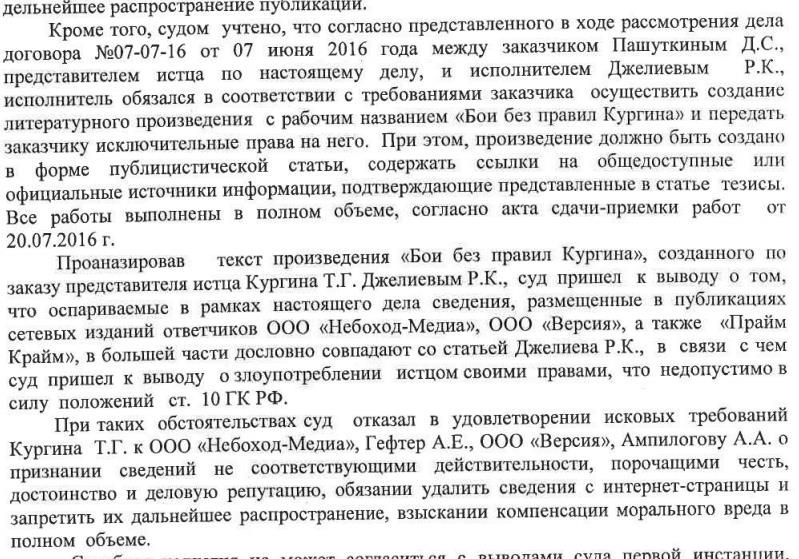 It is curious that a person with the same surname, namely Taimuraz Kazbekovich Dzheliev, owns... "The management company" A-ABM. " Whether he can be a relative of that named author of our publications is reliably unknown, but such details in the light of all the above look curious. Although very axed.

Moreover, earlier, as soon as The Moscow Post claimed its rights to the materials appearing in Pashutkin's claims, he immediately refused the claims and did not file a lawsuit. So, for example, there was a lawsuit by a lawyer against Hetzner Online AG, which is published on the official website of the courts of general jurisdiction of Moscow.

It was absurd: Pashutkin allegedly acquired the rights to the materials of our publication after their publication. Naturally, in hindsight, the authors of The Moscow Post did not write any texts by order. But they previously described in detail the methods of work of lawyer Pashutkin and Co.

Previously, Mr. Pashutkin worked in the structure of the FMG Group. According to the organization's official website, among the employees - graduates of the FSB Academy of Russia, worked in state security agencies.

If you look at the founder of A-ABM Oleg Popov, you can find a common business with Artem Govyadin, the son of the scandalous entrepreneur Sergei Govyadin. 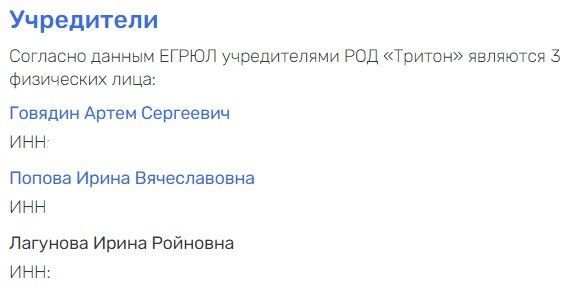 Beef is known for organizing the criminal prosecution of developer Albert Khudoyan, which many experts dubbed as an attempt to seize business. Previously, The Moscow Post wrote in detail about this story.

Moreover, Sergey Govyadin also acted not alone, but, as PASMI wrote (recognized as a foreign agent in the Russian Federation), with the help of a very significant administrative resource - the chief of staff of the Minister of Internal Affairs Vladimir Kolokoltsev Alexander Nikolaev. According to the sources of the publication, Nikolaev has long been familiar with Govyadin and provides him with general protection.

And here is another "garter" in law enforcement agencies traced by A-ABM lawyers. It remains only to assume what amounts are given to these characters by the respected philanthropist Timofey Kurgin in order to remain so in the network.

There is such an interesting thing "inkjet-non-spill." No matter how many black inks there are in it, they will never spill. So Kurgin, wherever he is "inclined," outwardly there is nothing behind him. What's inside?