State Duma Deputy Irina Yarovaya may be associated with the interests of God Nisanov’s Kievskaya Ploshchad State Corporation. If this is true, can this be regarded as a conflict of interest, and is it worth waiting for the reaction of the prosecutor's office?

As the correspondent of The Moscow Post reports, the namesake of the daughter of State Duma Deputy Irina Yarovaya, with whom many scandals are already connected, Ekaterina Yarovaya, can work for the structures of the capital's billionaire oligarch God Nisanov. The latter is associated in informal relations with influential officials and politicians, which is associated with extraordinary success in business and the lack of interest by law enforcement agencies. If earlier rumours were mainly around the Moscow City Hall and its head Sergei Sobyanin, then the possible work of the Yarovaya family on the interests of Nisanov may indicate the support of the oligarch in parliament.

The work of the full namesake Ekaterina Yarovaya for Nisanov’s structures became known from court documents, from which it follows that she protects their interests.

It is about, as, for example, in this decision of the Arbitration Court of Moscow dated November 11, 2019, an economic dispute between the Kievskaya Ploshchad GC and one of its contractors.

In another court decision, Ekaterina Yarovaya represents the interests of a number of entrepreneurs who do not seem to be related to Nisanov. However, among them was Roman Iliev. They say that he is a close relative of Zarakh Iliev, the business partner of Nisanov in the same Kievskaya Ploshchad. So does Yarovaya serve the interests of his family as well? 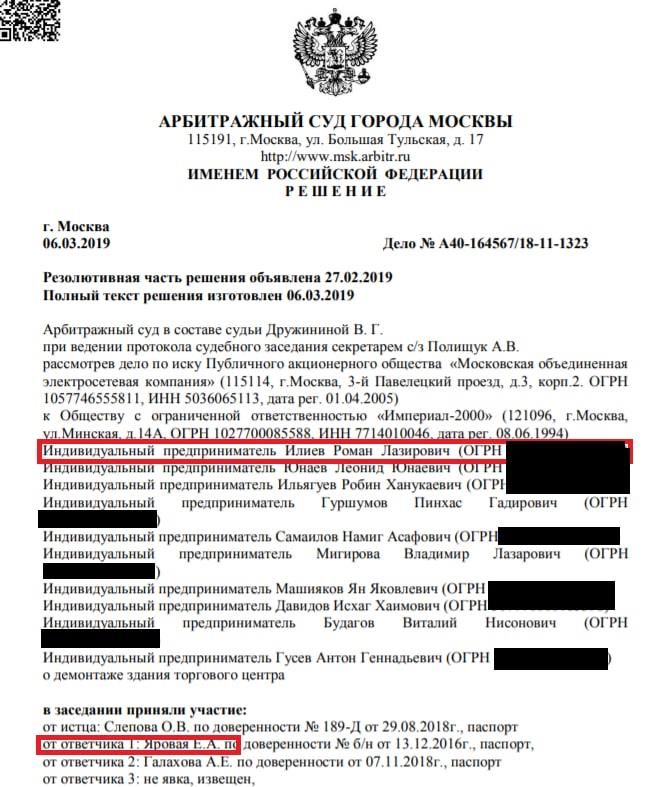 But in this decision Ekaterina Yarovaya is on the side of Ket & Co LLC, which was later reorganized into TIH Nagatinskaya LLC and is now controlled by relatives of God Nisanov. This company is engaged in the development of the eponymous TIH in Moscow - one of the largest infrastructure projects in the capital. 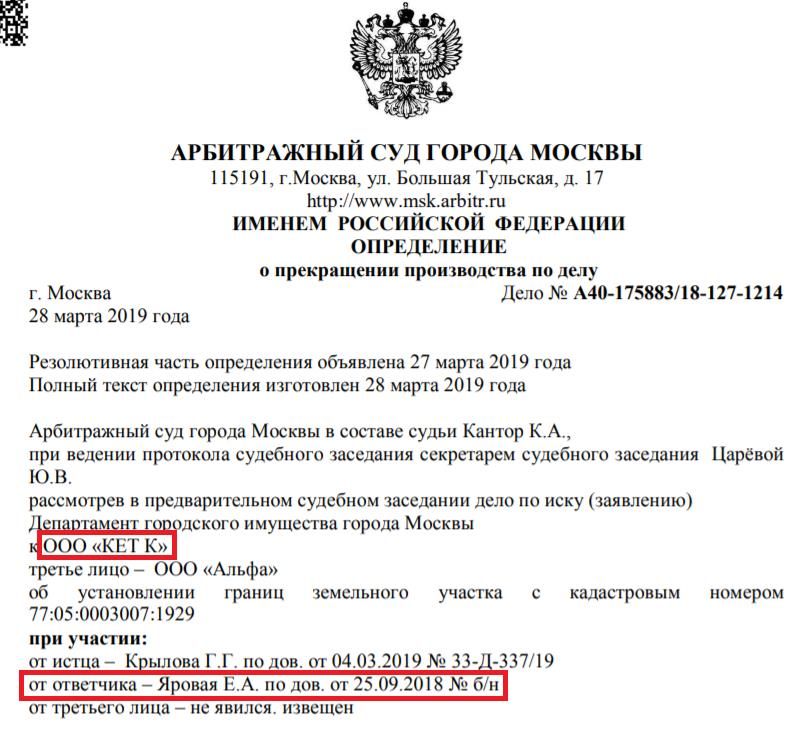 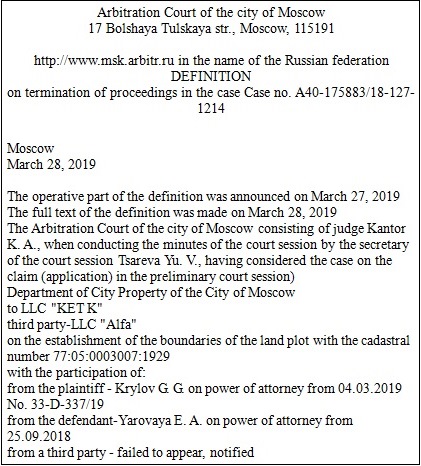 Earlier, the post of general director at TIH was held by another character from the "power" family - Alexey Rogozin, the son of the general director of Roscosmos Dmitry Rogozin. There were rumours that his employment could be a bribe for a certain promise to "solve" the issue of transferring the land of the Khrunichev Centre for the construction of Kievskaya Ploshchad. These lands are under the jurisdiction of Roscosmos, and the idea to transfer them to other needs has long been discussed, but has not been implemented.

Maybe that's why Alexey Rogozin left his post a few months after his employment? And how many more such acquaintances does God Nisanov have among the families of representatives of the political and administrative elite of the Russian Federation?

The same story was associated with the scandal with the sudden appearance of Dmitry Rogozin's apartment allegedly for 500 million rubles back in 2016. This was written by RBC. At that time, they also tried to link its appearance to Nisanov's "generosity" to "solve" the issue of the lands of the Khrunichev Centre. Although there is no evidence of this.

The Yarovaya family also has its own story with the apartment. Back in 2006, Irina Yarovaya bought an apartment, which she transferred to her then minor daughter. Perhaps it was about Ekaterina. In 2013, a scandal broke out - the media reported that Yarovaya lived in an undeclared luxury 4-room apartment in the centre of Moscow with a market value of almost $3 million.

It is not at all clear where the Yarovaya family could get such money. This scandal became the number one topic on the sidelines of the Duma, but for some reason no one saw anything criminal in it. They say that the apartment was bought when Yarovaya was not a Deputy. It is not clear why it is not declared. The situation was reported by Gazeta.ru.

But since then, that story has been forgotten, because Irina Yarovaya has already become one of the most high-profile newsmakers of the State Duma. She supported many odious laws, and her colleagues never ceased to be surprised by her resourcefulness and flexibility. After all, back in the early 2000s, Yarovaya took an active position against the current government, represented the Yabloko party and went to rallies.

Moreover, as Meduza writes (it is a foreign agent on the territory of the Russian Federation), Yarovaya allegedly actively worked with Mikhail Khodorkovsky's Open Russia, was the curator of the visiting school of public policy in Kamchatka. Why had she not fled the country with him when he was released from prison? Is the current position under the party in power too warm, and the political principles are not too strong?

By 2016, Yarovaya initiated almost 200 laws, and she was repeatedly tried to attribute lobbying for the interests of large businesses. She seemed to understand everything - the demonopolization of the sale of TV ads, which hit the Video International group during its conflict with Gazprom Media, the regulation of the sale of alcohol and the trade in the adoption of an unpopular law on the latter. She also carried out amendments to the legislation on agricultural land, the construction was later tried to attribute to the Kievskaya Ploshchad of Nisanov.

However, her most scandalous initiative was and still is the so-called "Yarovaya Package" - a package of amendments to various laws, which many considered a tightening of the screws on the part of the authorities. It, for example, introduced criminal liability for certain crimes in the Russian Federation from the age of 14 (international terrorism, participation in terrorist communities, participation in mass riots, responsibility for "non-reporting"), tightened the regulation of the religious sphere.

Despite the reputational damage that could be inflicted on the State Duma by Yarovaya's activities, such an ally with many connections would be very useful for God Nisanov. Especially in light of the recent scandal with the former owner of SDI Group, also a developer Ilgar Hajiyev.

He had several joint projects with the structures and relatives of God Nisanov to build a residential complex in Moscow. However, the result was disastrous for Hajiyev - he lost his business, Hajiyev accused Nisanov of "raiding", and was forced to leave the country because of threats to his own security. This was written by the  PASMI publication.

However, Hajiyev should not expect the reaction of law enforcement agencies concerning his claims. Perhaps the reason for this silence is a joint business that was previously conducted by a relative of God Nisanov, Oleg Yusupov, with the son of the Interior Minister Alexander Kolokoltsev. Yusupov had 22.2% in the restaurant business, the Il Forno company, co-owned by Alexander Kolokoltsev.

In 2017, after publications in the media, he abruptly went out of business. Today, Yusupov remains a co-owner of a number of firms doing business with the Kievskaya Ploshchad GC, as Vedomosti wrote.

After this story, there were rumours that the oligarch allegedly hired ex-assistant to the Interior Minister Nikolai Golovkin to work in the security service. In addition, according to the authors of the Rosotkat project, the former head of the Department of Internal Affairs for the Western Administrative District Andrey Puchkov allegedly got a job with Nisanov as the director of the Shchelkovsky bus station of the capital. He is a general who was previously considered close to Kolokoltsev.

The presence of former functionaries of the Ministry of Internal Affairs in the team would be useful to Nisanov. According to the authors of the Haqqin.az website, referring to the words of Hajiyev, allegedly illegal cash turnover and smuggling, which are found in the largest markets of the capital, lead to the loss of the Russian treasury up to $42 billion a year. Among such markets, with a high degree of probability, there may be Sadovod, Food City and Stolichny, owned by God Nisanov’s Kievskaya Ploshchad GC.

If this is true, then the losses to the economy due to the loss of tax revenues can be compared with the effect of Western sanctions. However, it can not be said that the markets of Nisanov generally remain without the attention of law enforcement officers. In March 2019, the security forces visited them, as Versia writes.

The Ministry of Internal Affairs, the FSB, and the Russian National Guard were involved in large-scale operations. Officially, the events were aimed at finding criminals who are wanted, as well as at preventing various migration offenses. Rumour has it that something else is happening at the Nisanov markets.

Law enforcement officers could search for cryptocurrency farms on the territory of the markets. This was reported by Vedomosti. Allegedly, back in April 2018, the director of the Department of Financial Monitoring and Currency Control of the Central Bank, Yuri Polupanov, stated that Sadovod, Moscow and Food City have become pioneers and leaders of the cryptocurrency market - they buy cryptocurrency for most of the revenue. Crypto turnover could be about 600 billion rubles a month. If this is true, then Nisanov's markets can rightly be called a "state" within a state.

To serve such a state and not have problems with the law, it is not enough to be a simple, honest businessman. It would be a good idea to have the most real sovereign people in your service. Or, if not in service, then at least somewhere close. And if Ekaterina Yarovaya is really the same daughter of Yarovaya, then isn't the family of one of the most scandalous people's deputies of modern Russia doing the same thing? And if so, why do we need such deputies?