The Maidannik was advised by Transneft: what intrigues accompany the high-profile case of the oilmen

While the bankruptcy trustee of one of Rosneft's subsidiaries was sent to prison, the former adviser to the company's vice president seems to have remained at large.

According to the correspondent of The Moscow Post in Ugra, the Nizhnevartovsky city court sentenced Oleg Smetanin, the former bankruptcy trustee of the liquidated JSC Nizhnevartovskneftegaz, to six years in a general regime colony. He was detained back in 2017, but for some reason until the last moment there was no news about his case, as if they were trying to hide something.

And he was arrested, for a second, along with the then adviser to the vice president of Rosneft Sergey Bogdanov, about whose future fate is still not known for sure. Have criminal problems passed his side? In this case, it would hardly have been possible without the intervention of Bogdanov's immediate boss, Igor Maidannik, whose trace was recently discovered at Transneft, where he presumably can work in conjunction with the influential family of her top manager Larisa Kalanda.

It is worth noting that even now the name of Oleg Smetanin does not sound open - it is not published on the website of the district prosecutor's office. But five years ago, the detention of the bankruptcy trustee of Nizhnevartovskneftegaz Oleg Smetanin and vice president of the company Sergey Bogdanov was still reported.

Moreover, Smetanin then appeared in two more criminal cases under Art. 201 of the Criminal Code (abuse of authority). They also dealt with the bankruptcy of Rosneft - Kabardino-Balkarian Fuel Company and Sakhalinmorneftemontazh, where Oleg Smetanin acted as arbitration manager.

But now he is convicted only in the case of Nizhnevartovskneftegaz. Did they forget the rest? The court found that from October 2013 to September 2015, the defendant stole money from an oil and gas company using his official position. As a result, the parent PJSC NK Rosneft suffered material damage in the amount of over 300 million rubles.

The scheme was banal: with the help of forged documents, the enterprise formed fictitious accounts payable for 3.2 billion rubles. Nizhnevartovskneftegaz was already experiencing not the best financial times - in 2013 it was declared bankrupt. As a result (including through the efforts of an "effective" bankruptcy trustee), the company was liquidated in 2016.

In April 2014, as part of the bankruptcy case, a court decision appeared on the inclusion in the register of claims of creditors of NIS debt to Ugra Auto Company LLC in the amount of 3.4 billion rubles. This amount grew from 300 million, which (according to documents) on December 14, 1998, OJSC Nizhnevartovskneftegaz borrowed from a certain ALNIKO CJSC. For fifteen years, interest on astronomical scales accumulated on the total amount of debt. In 2007, ALNIKO transferred the right of claim to Ugra Auto Company LLC.

However, the investigation considered that the documents on the loan and assignment of the right of claim are false. Although all subsequent court decisions were quite real. For example, on the replacement of Ugra Auto Company LLC by Real North LLC - it was there that Oleg Smetanin transferred 300 million rubles to repay the debt.

According to Rusprofail, the head of the enterprise was Yulia Pilyugina. She is Oleg Smetanin's assistant in another enterprise, also controlled by Rosneft. His bankruptcy (what a coincidence!) Was engaged in Smetanin.

The latter will now go to the stage, but Julia Pilyugina seems to be calmly engaged in jurisprudence. At least on the site Profi.ru found a questionnaire of a lady with exactly the same name, she helps her help in drafting documents. And if this is really our heroine, then it's easy to imagine what kind of help we can talk about...

The further fate of Mr. Bogdanov is not very clear either. It was he who visited the tranche in favor of Real North LLC, then holding the position of adviser to Rosneft Vice President Igor Maidannik, who headed the company's legal service. Although, according to Rosneft's corporate rules, Bogdanov was obliged to send the right of claim for inspection to company specialists. About this wrote Novaya Gazeta.

RBC back in 2017 reported his detention. It is known that after that, the operatives went with searches to his estate in the village of Shchapovo, Podolsky District, Moscow Region, where Bogdanov asked permission to pray in a personal chapel. Judging by the fact that since then his name has not openly surfaced in any criminal cases, his prayers could be heard.

And here it is interesting how Smetanin and Bogdanov generally ended up at Rosneft - both had previously worked at TNK-BP, which was bought by the state corporation in March 2013. After the company was bought by Rosneft, Igor Maidannik, head of the company's legal service, became one of the few employees who agreed to move to Rosneft. However, he left the company in 2015.

And it was not abs where, but to work "under the wing" with Viktor Vekselberg - to advise the T Plus energy holding group on the return of consumer debts. Maidannik has known Vekselberg for about 20 years, he was close and understood by Renove as the head of the TNK legal department since 1998, and then as the head of the TNK-BP legal support unit (since 2003). Renova and Access Industries friendly Leonard Blavatnik were co-shareholders of TNK-BP just before the purchase of the Rosneft enterprise.

Igor Maidannik is considered one of the best corporate lawyers in Russia. This experience probably helped him "save" his former adviser Bogdanov, about whom recently neither rumor nor spirit?

Actually, there is not much information in open sources about the Maidannik itself. According to Rusprofail, until December 15, 2021 he was listed on the co-founders of the Moscow Bar Association Delcredere, where his partner was Olga Renova, the daughter of ex-Minister of Justice Eduard Renov. A person knows how to cooperate with influential people!

And this company served Transneft. Versiya wrote that Maidannik also advises Transneft management on legal issues. Moreover, this bar association had the same address and telephone number as the law firm Interlegalservice.

The founders of the latter were officially the vice president of the oil company Larisa Kalanda and her daughter Alina, who, by the way, also worked in the legal department of Transneft. In addition to her, Transneft Vice President Rashid Sharipov, who is married to Larisa Kalanda's sister, also works in the state corporation. A real family business!

And then it is right to recall that Larisa Kalanda from 2006 to 2016 Kalanda worked at Rosneft, but she should own more than 2 million shares of Rosneft. So it was she who attracted Maidannik to Transneft? And there she could not have turned around - earlier The Moscow Post wrote in detail about the strengthening of her position in the company and the possible employment there of her wife Vladimir Kalanda, a man very famous in the legal community, and probably familiar to Maidannik. 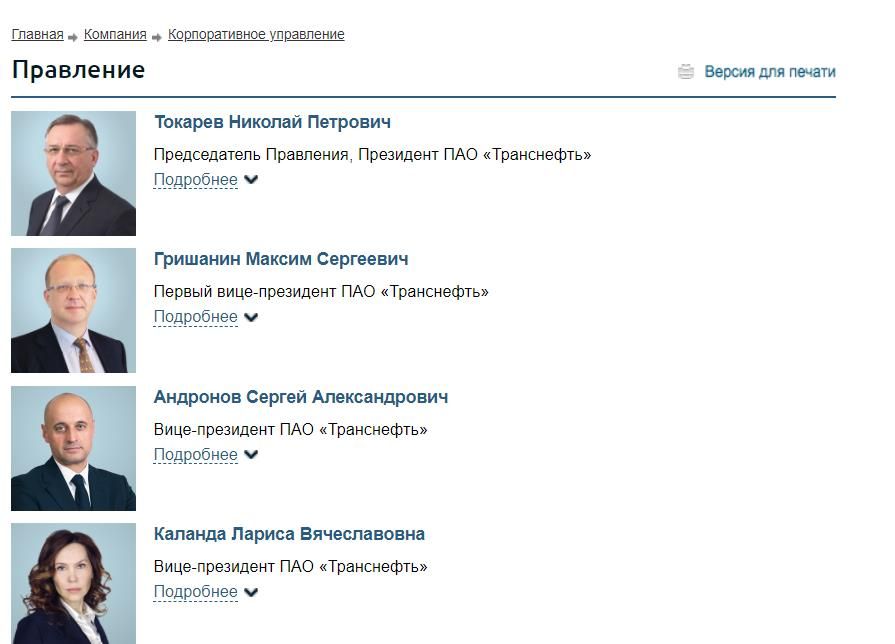 It will be appropriate to recall here that Vladimir Kalanda is a native of the KGB. In 1998, he got a job at the Personnel Department of the Presidential Administration, where he acquired a huge number of important contacts. Many of Kalanda's comrades then work today in important posts, including large state-owned companies, and Transneft is no exception.

In addition, Kalanda was secretary of the presidential commission for the appointment of federal judges. According to unconfirmed information, such a combination of education, connections and experience allows Vladimir Kalanda to influence the adoption of important decisions in the courts. Some even consider him the "shadow leader of the Russian Themis." So who could "ask" for the ignorance of the missing Bogdanov?

And then it would be right to recall the long-standing conflict between the heads of Rosneft and Transneft Igor Sechin and Nikolai Tokarev, about which The Moscow Post wrote more than once. So, Maidannik, involved in fraud with Rosneft's money, could then "hide" in a structure that was not very friendly to her?

Well, this sheds light on the current situation - why they seemed to be diligently silent about the case, and then Bogdanov and Maidannik stopped "glowing." It is possible that both can still work together.

And in this case, it would be worth looking at Transneft's budgets now - is nothing like what happened at Rosneft happening there?