The "Redsis" contract with Smolny may raise questions for the entire transport block of the city, which is supervised by Vice Governor Maxim Sokolov.

According to The Sankt-Peterburg Post, another scandal may soon erupt over the distribution of budget funds for the needs of the transport infrastructure of the Northern capital.

Experts suggest that in the actions of St. Petersburg State Unitary Enterprise Passazhiravtotrans, which is supervised by the City Transport Committee, there could be signs of corruption violations under the contract for the modernization of technical means of ensuring transport security for the city's transport infrastructure.

This sphere is supervised by the vice-governor of St. Petersburg Maxim Sokolov. It is believed that he makes decisions taking into account the opinion of the former security official Vitaly Rodionov, who is called Sokolov's unofficial adviser on the network.

The contract, which attracted the attention of social activists, was concluded in 2018 with Redsys, a well-known IT company throughout the country (Redsis LLC), its amount amounted to 83.5 million rubles. For three years, this company has not climbed out of the scandals associated with bankers Dmitry and Alexei Ananyev who left the country.

According to the authors of the VCHG-OKPU telegram channel, allegedly a group of officials, among whom they called Sokolov, as well as the general director of the State Unitary Enterprise Andrei Lyzin and a number of other persons, allegedly could have commercial benefit from the plant for the contract of Redsis LLC. At the same time, the State Unitary Enterprise led by Lyzin itself ended 2020 with losses of 678 million rubles with revenue of 15 billion rubles.

The structure itself, according to the authors, allegedly installed non-working equipment, and the electrical installation work was low-quality and in violation of the deadlines, for which it was allegedly charged a delay in fulfilling contract obligations. 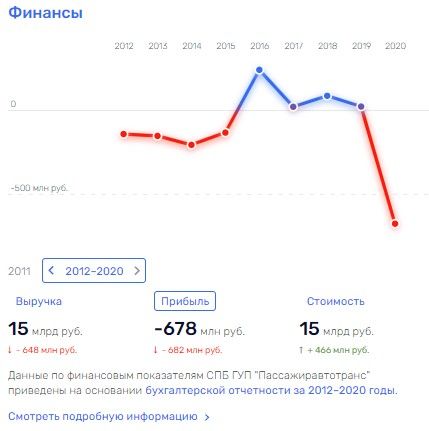 With the arrival of Maxim Sokolov, the State Unitary Enterprise "Passazhiravtotrans" somewhere lost all the profit

Note that there were no complaints from law enforcement officers or the FAS under this contract, but another thing is important. If there were any corruption violations, now it will be very difficult to find ends. Redsis LLC itself is in bankruptcy proceedings, and its founders have long been absent from its founders or people who are considered direct beneficiaries (Vasily Vasin). Their place was taken by the "impersonal" Cypriot offshore "Raliyev Management LTD," which is associated with the Ananyev. Today, 100% of its shares are pledged to Promsvyazbank.

The very news of the conclusion of a contract with "Redsis" today could cause a scandal, but in 2018 it went unnoticed. In fact, this was one of the last major contracts of "Redsis" before the Ananyev case and his IT company Technoserv, the "last tour." Briefly recall why both of these companies got into all the headlines of the Russian media.

As already mentioned, "Redsis" is associated with the Technoserv company of the Ananyev brothers, who are suspected of withdrawing 66 billion rubles from Promsvyazbank. Technoserv was a long-term major supplier and contractor to government agencies for the implementation of IT solutions and the supply of equipment worth billions of dollars. "Redsis" was also engaged in the same thing, where the key actor was the former co-owner of the company Vasily Vasin.

Ill-wishers attribute this to the connections and possible influence of the Ananyev brothers and their associates on the decision-making process through the possible interest of businessmen and officials.

The scandal received a new development in the fall of 2020, when the first deputy head of the Pension Fund of Russia Alexei Ivanov was detained. Together with him, Alexey Kopeikin, director of the department for working with state structures of Technoserv, turned out to be in the hands of law enforcement officers, and after that six more high-ranking PFR officers.

They are accused of receiving bribes from the former Promsvyazbank shareholder Alexei Ananyev and the structures controlled by him, among which was the IT company Technoserv, which provided the same services as "Redsis". According to the TFR, money was transferred to officials for information about upcoming public procurement and assistance in winning the auction. About this writes "Kommersant".

In the same case file appears the company "Redsis." But there are no and no criminal cases against its former owner Vasily Vasin. According to evil languages, the current leadership of the FIU is allegedly not interested in this, where people who worked with the Ananyevs may still remain, as well as the capital city hall, the second counterparty of "Redsis" in terms of allocations after the FIU.

All this was after the St. Petersburg State Unitary Enterprise signed a contract with "Redsis". However, there is little doubt that officials knew exactly who they were concluding with. Now, in relation to Vasily Vasin and the head of the "Redsis" legal department, Victoria Golovkina, there are legal proceedings in the criminal case of intentional concealment of 43.8 million rubles from the tax authorities. The company was supposed to send them to pay off the tax arrears, but, according to investigators, it did not do so. About this writes "Kommersant". 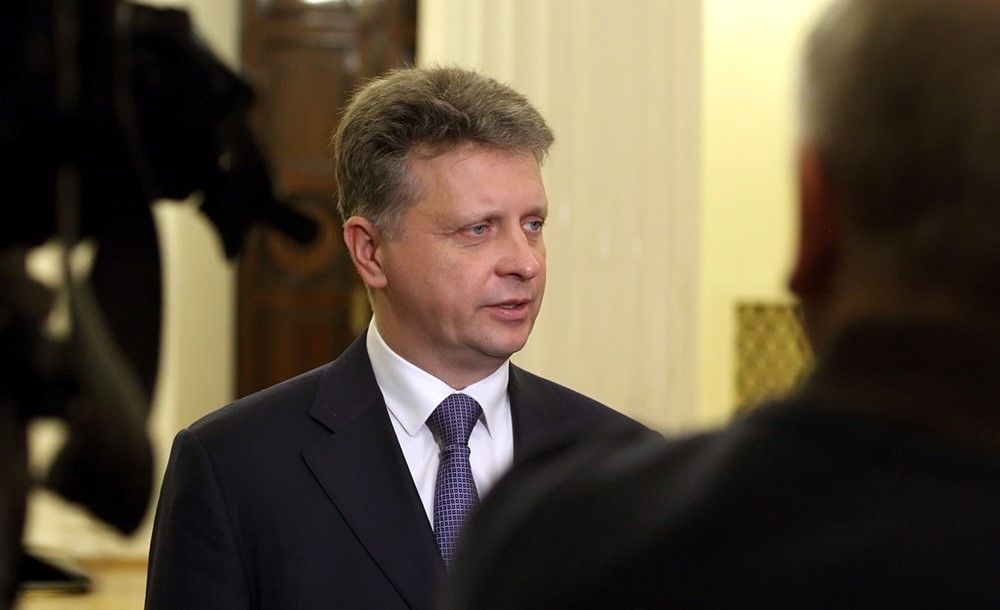 Instead of transport reform, Maxim Sokolov began to redistribute budget flows in favor of a narrow circle of people?

So far, their guilt has not been proven, and all the talk that they could withdraw money from the company when criminal cases against Ananyev and Ivanov appeared remains only rumors. Nevertheless, if there were violations, they were hardly isolated - they should have checked and taken into account this in Smolny. But apparently they just turned a blind eye to it.

We are talking about the wave of personnel changes carried out by Maxim Sokolov, who previously headed the federal Ministry of Transport. Managers previously working in the structures of the Ministry of Transport, which until June 2018 was headed by Sokolov, were assigned to the committees on transport and the development of transport infrastructure in St. Petersburg.

At the initiative of Sokolov, a rotation of state institutions was also carried out. Earlier, three departments transferred from CRTI under the control of Komtrans - the Directorate of Traffic Management (DODD), the Center for Transport Planning (CTP) and the Center for Parking Management (MCC).

Scandals were not long in coming. True, it is not completely clear whether they were the result of the zeal of officials or just the very alleged attempt to redistribute budget flows in the field of transport.

In December 2020, SPb GKU Transportation Organizer (curator - Sokolov), subordinate to the Transport Committee, appealed to the police with a request to bring to justice the contractor of STC Meter LLC, which is responsible for creating a comprehensive information system for managing public transport. The cost of the fourth stage of this task alone was 450 million rubles. About this wrote the portal "78.ру".

The market said that they want to terminate the contract in order to give to one of Smolny's new counterparties in the transport sector. Now it is becoming clear that we could talk about "Redsis". But it didn't happen. Most likely, due to scandals related to the company and the latter entering into bankruptcy proceedings, which made the conclusion of any contracts impossible.

Scandals began in the field of distribution of funds between carriers for the implementation of contracts for the transportation of passengers by public transport. One of the city's major carriers, Avtolain, filed a complaint with the FAS, demanding that public procurement for the maintenance of the St. Petersburg route network be canceled by 186 million rubles.

The most interesting thing is that the FAS recognized the complaint as justified, albeit partially. But she did not cancel the results of the bidding, because this could jeopardize the timing of the implementation of the transport reform, which Sokolov actively lobbies.

However, in the case of "Redsis", the question arises - why questions to Sokolov if he came to the region later? According to the authors of the site "Russian Crime", allegedly Sokolov could become a conductor of the policy of the "transport group," the key persons in which are the deputy chairman of the St. Petersburg Transport Committee Andrei Velesovich, the General Director of Passazhiravtotrans Andrei Lyzin and a number of other persons who are connected by a common figure - former security official Vitaly RoRodionov. He is called a freelance adviser to Sokolov.

According to the same authors, allegedly this group has been cooperating at least since 2016 and distributing funds received from state contracts. Moreover, they can be delivered to companies affiliated with these persons.

One of these companies may be RTS LLC, which recently changed its name to Parity LLC. Its general directors are also trying to connect with Sokolov, Rodionov and Velesovich. The company works only with urban transport institutions. The amount of its state contracts is 983 million rubles, of which 566 million are with the State Unitary Enterprise Passazhiravtotrans. 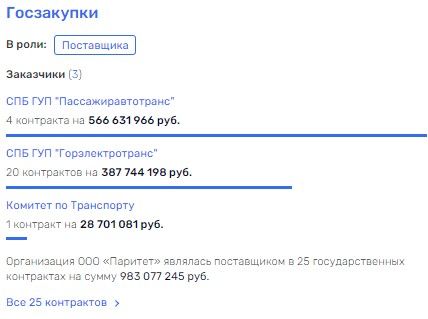 Contracts of Parity LLC (in the past - LLC UK RTS)

Thus, if law enforcement officers have questions about the contract with "Redsis", this may have far-reaching consequences for many interests in Smolny. Including for Sokolov, who promised the city a new, modern transport model. But instead, it can be a conduit of completely different interests.