The head of Professor Makarevich, or again "radish"

Oleg Makarevich, who until recently was on the federal wanted list, may continue to conduct "gray schemes" through employees of the Federal Tax Service, who, according to our readers, are in his "service." According to our sources, the "elusive professor" disappeared in Switzerland, using Turkey as a transit.

The Moscow Post sent a package with fantastic documents about the turbulent activities of Oleg Makarevich, who is on the federal wanted list.

On the envelope, the return address is the city of Tambov, which is known for the common expression "the Tambov wolf is your comrade..."

But it seems that the "Tambov wolves" favorably accepted Professor Oleg Makarevich, who had been playing in the Krasnodar Territory not so long ago, into his "flock." And where only the Federal Tax Service of the Russian Federation owes millions. tax rubles. But now he is dragging his "business" to the Tambov province.

But how did you manage to carry your legs away from the criminal case and also get into a new, very profitable transport business?

Recall that The Moscow Post Professor Makarevich lost 4 trials in a row! But he did not calm down, but again began to bombard both the Editorial Office and the investigating authorities with his letters.

Now, as if there was a lull, perhaps because Mr. Makarevich's structures bite into Tambov's land?

The Moscow Post correspondents understood the details of the elusive "Joe Makarevich."

Despite the fact that Oleg Makarevich is hiding - as evil tongues say - from justice, through intermediaries he can calmly conduct business. Moreover, a business that, as our readers reported, cynically leaves tax audits.

Among the so-called "kubyshek" Mr. Makarevich are called LLC "Trans-Ural," LLC "Bigkar," LLC "Neva-Logistics." All three companies "settled" in the Tambov region in June this year.

All these offices until 2018 were part of the Krafter Group of Companies, which was allegedly founded by Mr. Makarevich - according to the source - in 2010. And today this group of companies is one of the TOP-5 of forwarding companies in the Russian Federation.

Possible tax risks of the Krafter Group of Companies for 2019 - 2021. can be about 2 billion rubles. 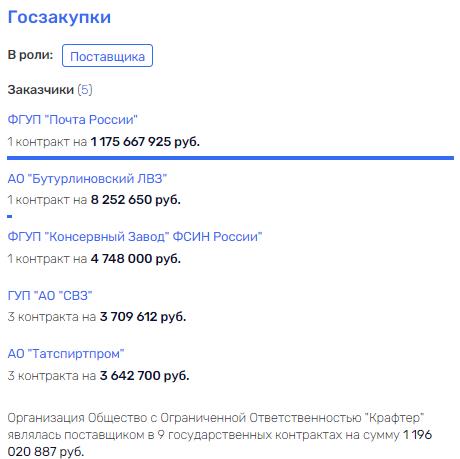 According to our reader, the re-registration of firms from its circuit to the Tambov region is allegedly carried out in order not to pay taxes, since Oleg Makarevich has his own people in the Federal Tax Service in the Tambov region, the source said.

Among them, as if - the head of the Federal Tax Service for the Tambov Region Alexei Zhitlov and his subordinates.

The official biography of Mr. Zhitlov says that he has long held various positions in the Timashevsky district in the Kuban, up to the head of the local administration. By the way, Mr. Zhitlov was born in this corner of Russia. 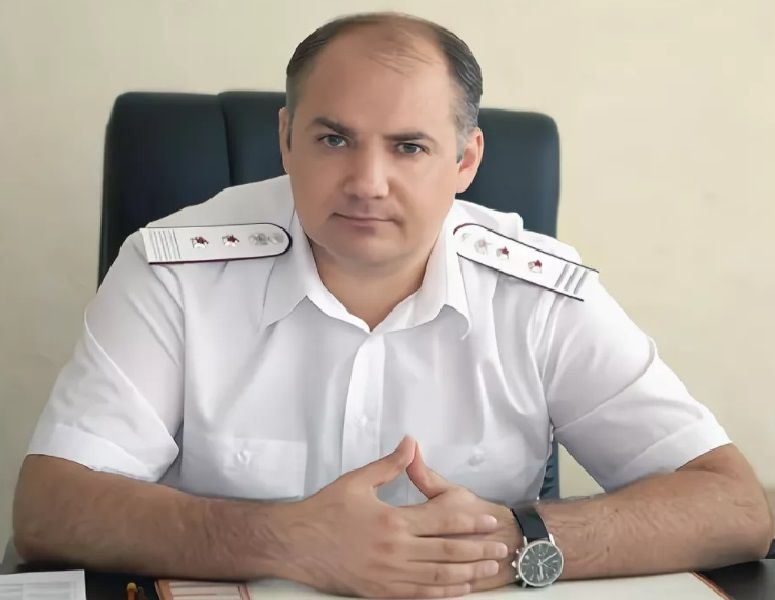 "During his service in the Krasnodar Territory, Alexei Zhitlov and his subordinates provided Oleg Makarevich with various services of a corrupt nature, the reader writes in a letter. - "In particular, the production base owned by Makarevich of the parent company of COPT CJSC within Krasnodar was bought by Mr. Makarevich into ownership for a penny. And it happened with the help of employees of the Federal Tax Service in the Tambov region. "

Today, the COPT company is managed by Nikolai Kaidash. And he previously headed Kormilitsa-Sochi LLC. This office is controlled by Intergrant LLC. And until 2021, the company belonged to Snabprofil LLC and was on the list of offices established by Oleg Makarevich.

Next comes I.O. Deputy Head of the Federal Tax Service for the Tambov Region Viktor Semikov. He seems to be raising money.

Another person potentially participating in the cases of Makarevich is allegedly acting. Deputy Head of the Federal Tax Service for the Tambov Region Sergey Moskalenko. He was the first deputy general director of JSC "Garbage Removal Company." And this office is part of the business empire of the tireless Makarevich.

According to the source, Sergei Moskalenko personally took part in the seizure and re-registration of the production base of COPT CJSC for Oleg Makarevich.

Screenshot from the site of the "Garbage Collection Company." Photo: http://trashcomp.com/news/Pozdravljaem-s-Novym-2021-godom (archive link) 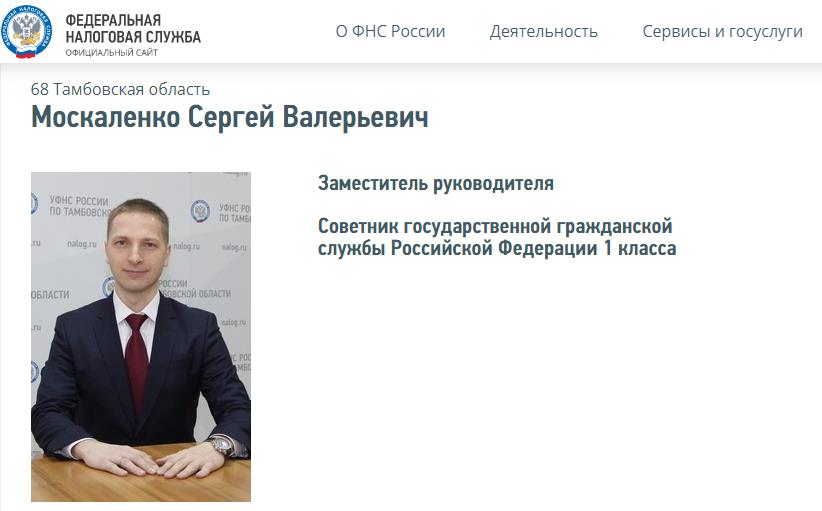 But Sergei Moskalenko as deputy head of the Federal Tax Service for the Tambov Region. Photo: https://www.nalog.gov.ru/rn68/about_fts/structure/head/12818409/

By the way, if you look at the portfolio of state contracts of COPT CJSC - in the first place among customers - Garbage Removal Company JSC. 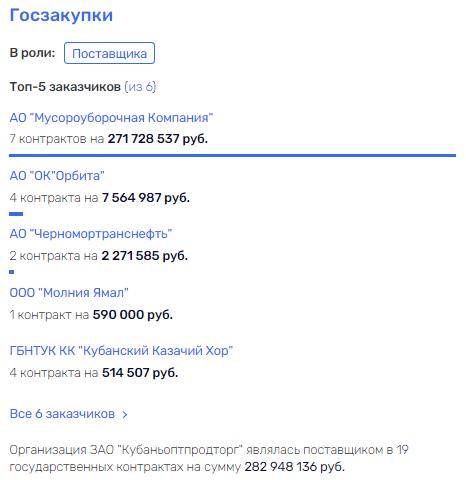 In addition to Trans-Ural LLC, Bigkar LLC, Neva-Logistics LLC, Krafter LLC, Mr. Makarevich owned a much larger number of companies. And the lion's part of these offices is registered in Moscow. It is possible that soon they will be catapulted to the Tambov region in the same way as "comrades."

By the way, business splitting into "daughters" is used in the construction of tax evasion schemes.

One of the companies is still based in the Krasnodar Territory, where, we recall, Mr. Makarevich conducted his business for a very scandalous long time.

An interesting detail: LLC UK "KGF Group" and LLC "KGF" are also registered there, the head of which until 2019 was the already mentioned Alexey Zhitlov. 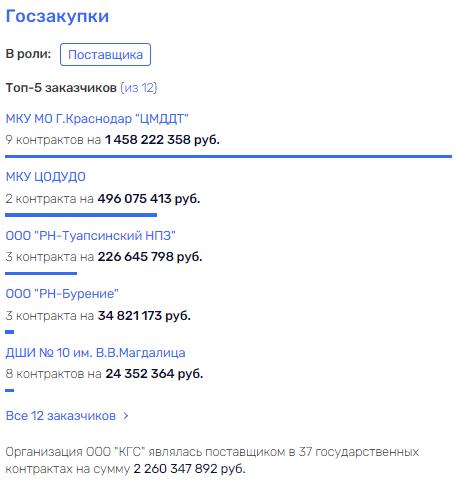 A man with the same name at one time led the Krafter company. He was the founder of the "Association of Young Entrepreneurs" in the Krasnodar Territory. And the deputy Dmitry Ananyev from Timashevsk worked there (not to be confused with the ex-owner of Promsvyazbank).

Dmitry Ananyev also owns AMR, which was associated with Krafter. 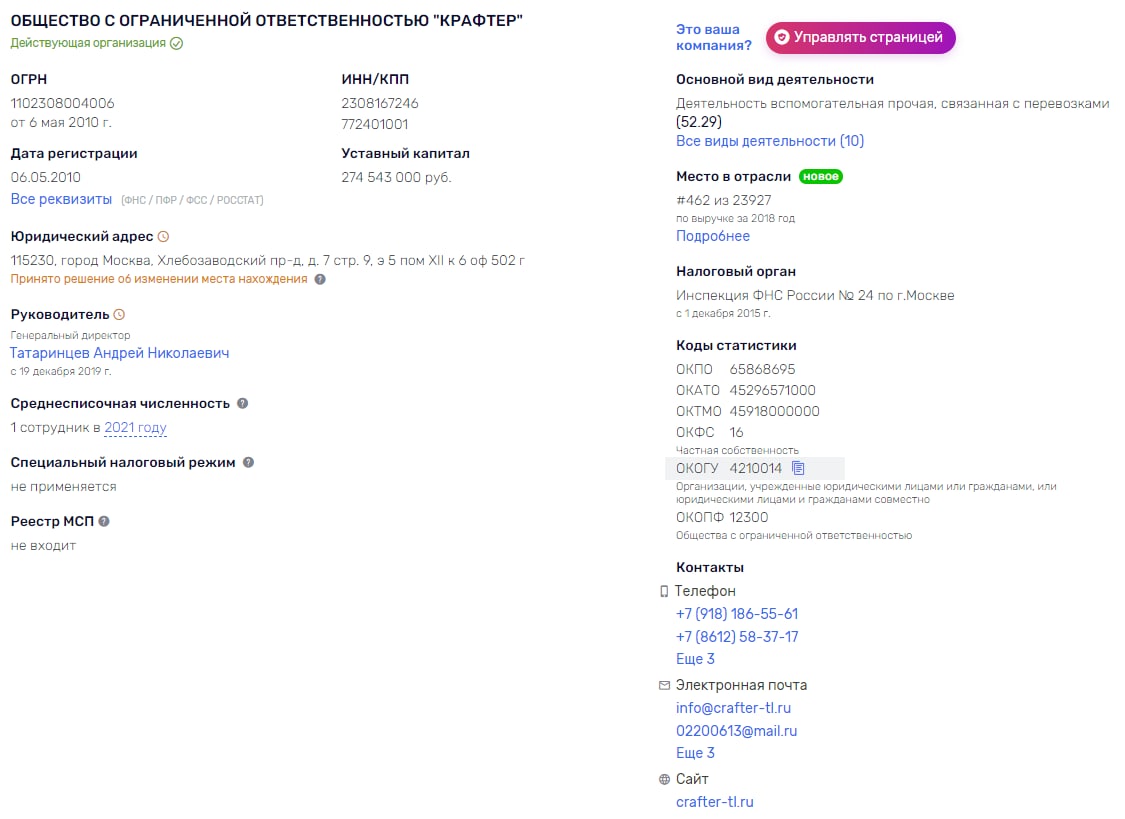 A person with the same name was listed as a member of the Association "Self-regulatory organization of evaluators" Expert Council, "which participates in working bodies functioning under the Council for Evaluation Activities of the Ministry of Economic Development. Tatarintsev's mailing address is Krasnodar Territory. 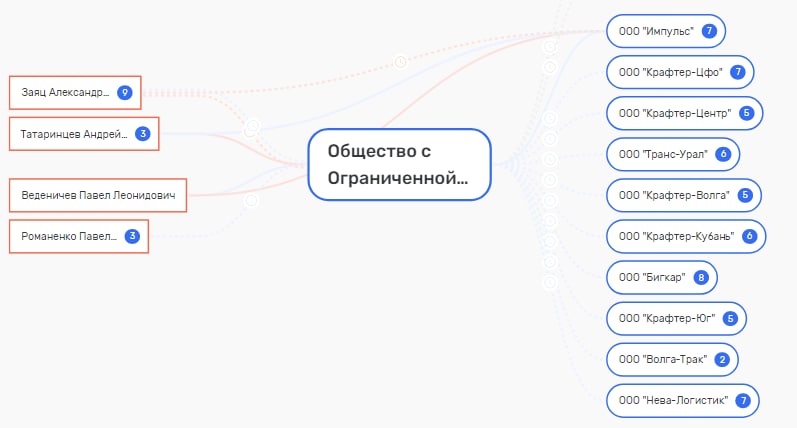 Andrei Tatarintsev and the current founder of the Krafter Group of Companies, Pavel Vedenichev, work at Impulse LLC, which is engaged in transportation. And this organization periodically receives quite large contracts from the Russian Post.

At the same time, starting from 2019, its revenue is at zero, and the last state contract of 2017 is still at the stage of execution.

According to the data, the Impulse company owes Rosenergobank more than 1 billion rubles. The court ruled to satisfy the claim from the monetary institution. And, apparently, the owners of the company decided to quietly, as they say, close the shop.

It seems that this is another matter in the piggy bank of Oleg Makarevich.

Today, according to a source from The Moscow Post, Oleg Makarevich, through communications with the FSB and the FSB, allegedly makes attempts to remove Alexei Semenov, as well as his deputies, from the post of head of the FSB for the Krasnodar Territory. And they say, he pulls the head of the Federal Tax Service for the Tambov Region Alexei Zhitlov and his "brigade" to these places.

The patronage of the tax authorities of Kuban and Tambov - as again reported by an informed source - can be provided by the deputy head of the Federal Tax Service of the Russian Federation Yulia Vyacheslavovna Shepeleva. 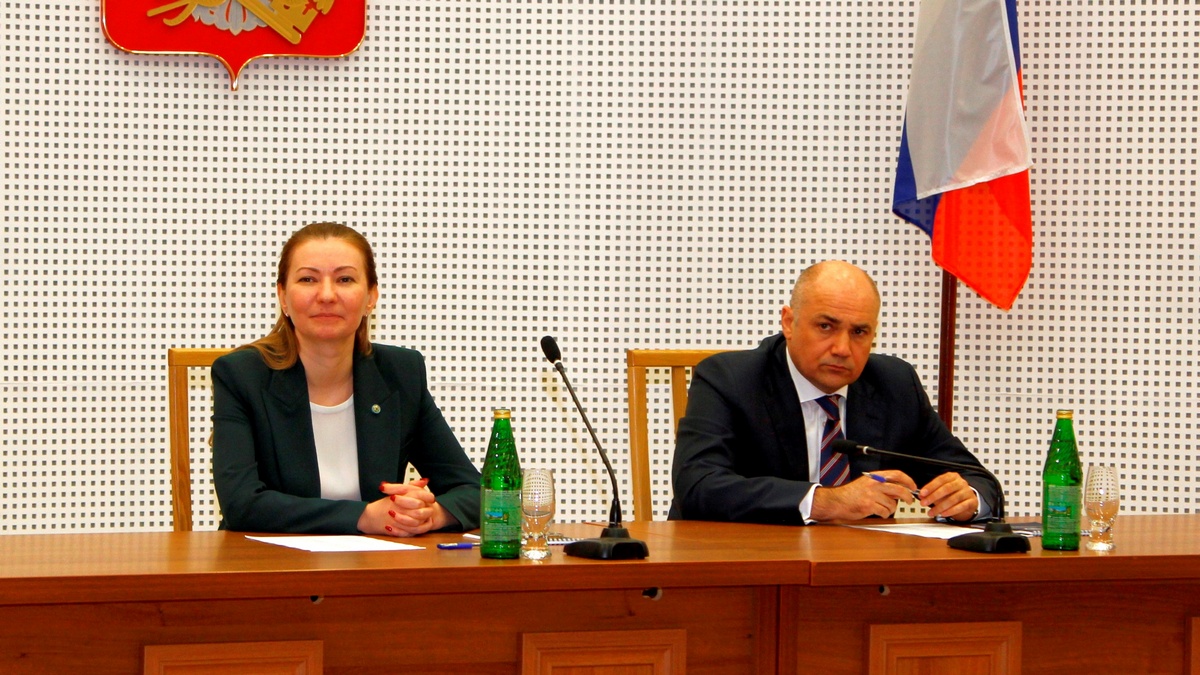 Ms. Shepeleva herself is from Krasnodar, and her father led - in the recent past - the inspection of the Federal Tax Service for the Dinsky District of the Krasnodar Territory.

Now it's up to law enforcement, but the facts themselves - we agree - are shocking!

Would not choke on strudel

One of the latest investigations dedicated to Mr. Makarevich "Does not want to be" rare: Oleg Makarevich took up "denunciations" from the snuff box was published on June 24, 2022...

And we seemed to have lost Professor Makarevich! According to rumors, he really broke down behind the cordon and dug in in Vienna. And from there at one time he bombarded prosecutors and investigators, they say, "not guilty... me. " 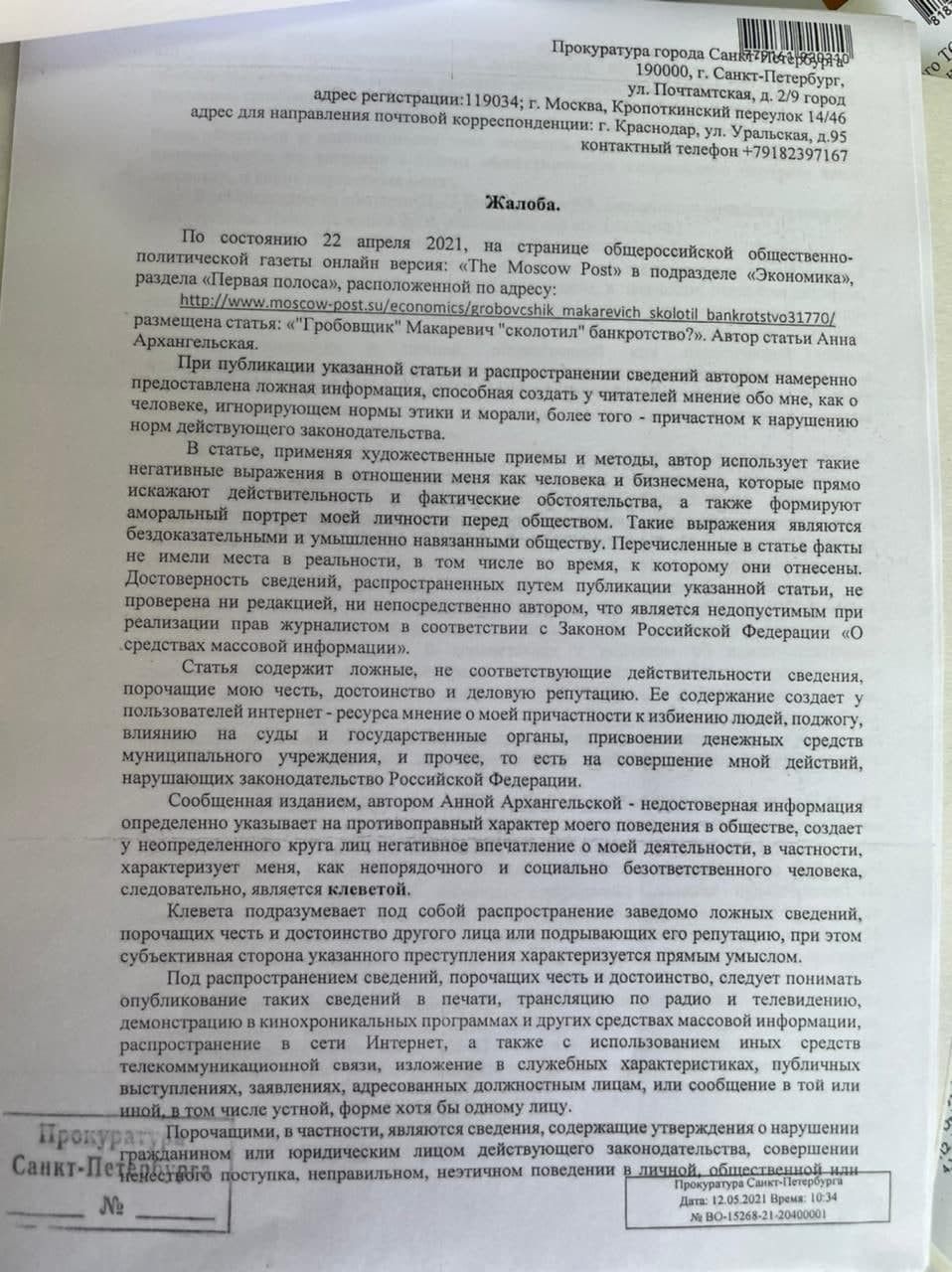 And then the news came that Oleg Makarevich was put on the federal wanted list.

But, they say that no one was looking for Mr. Makarevich! And it is strange in itself that the Main Directorate of the Ministry of Internal Affairs for the Krasnodar Territory did not even bother to raise the dossier of "Professor" Makarevich. Or read The Moscow Post's investigations.

Although a powerful "roof" could intervene in the case of the "king of garbage," as Professor Makarevich was called by the eyes.

Journalists of The Moscow Post traced that Oleg Makarevich was included in the close circle of the former governor of Kuban Alexander Tkachev. 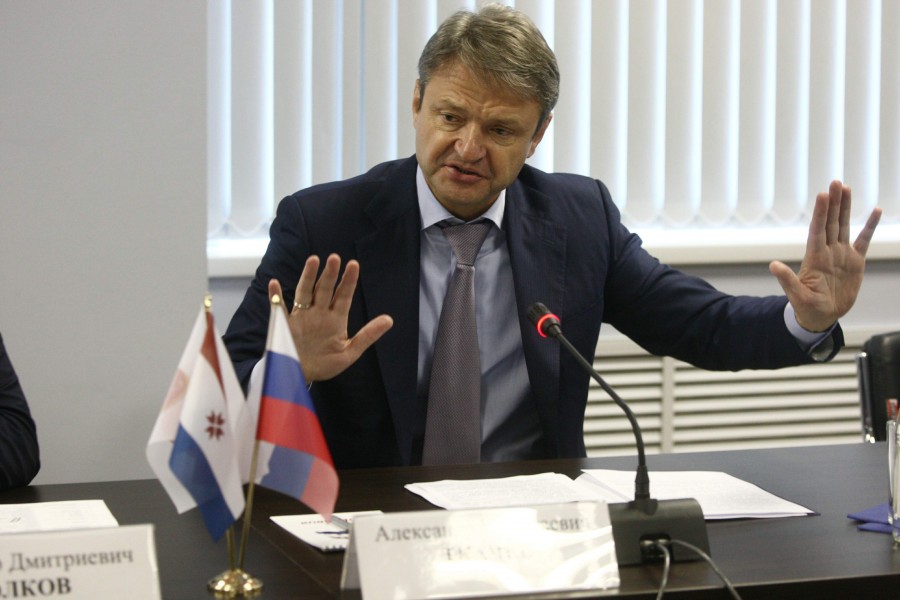 According to rumors, Mr. Makarevich did not just "rise" in the Krasnodar Territory, especially since he is from the "Varangians." And businessman Makarevich was always close not only to the former governor Tkachev, but also to the vice-governor (also former) Alexander Remezkov.

And it seems that it was the State Duma deputy Remezkov - at one time - who laid the path to Austria for Makarevich's friend.

Curiously, Mr. Remezkov, PhD in Economics, is a professor at Kuban State Agrarian University. So Oleg Alexandrovich Makarevich is also a doctor of economic sciences. And also a professor at the same university. And how do they do it so amicably?

It was under Tkachev-Remezkov that all the companies and firms of Mr. Makarevich "blossomed": the holding "UMK" ("Southern Diversified Corporation"). This wise holding included more than 80 enterprises. These included the retail chains Est (more than 50 stores) and Mag-Mak (8 supermarkets). 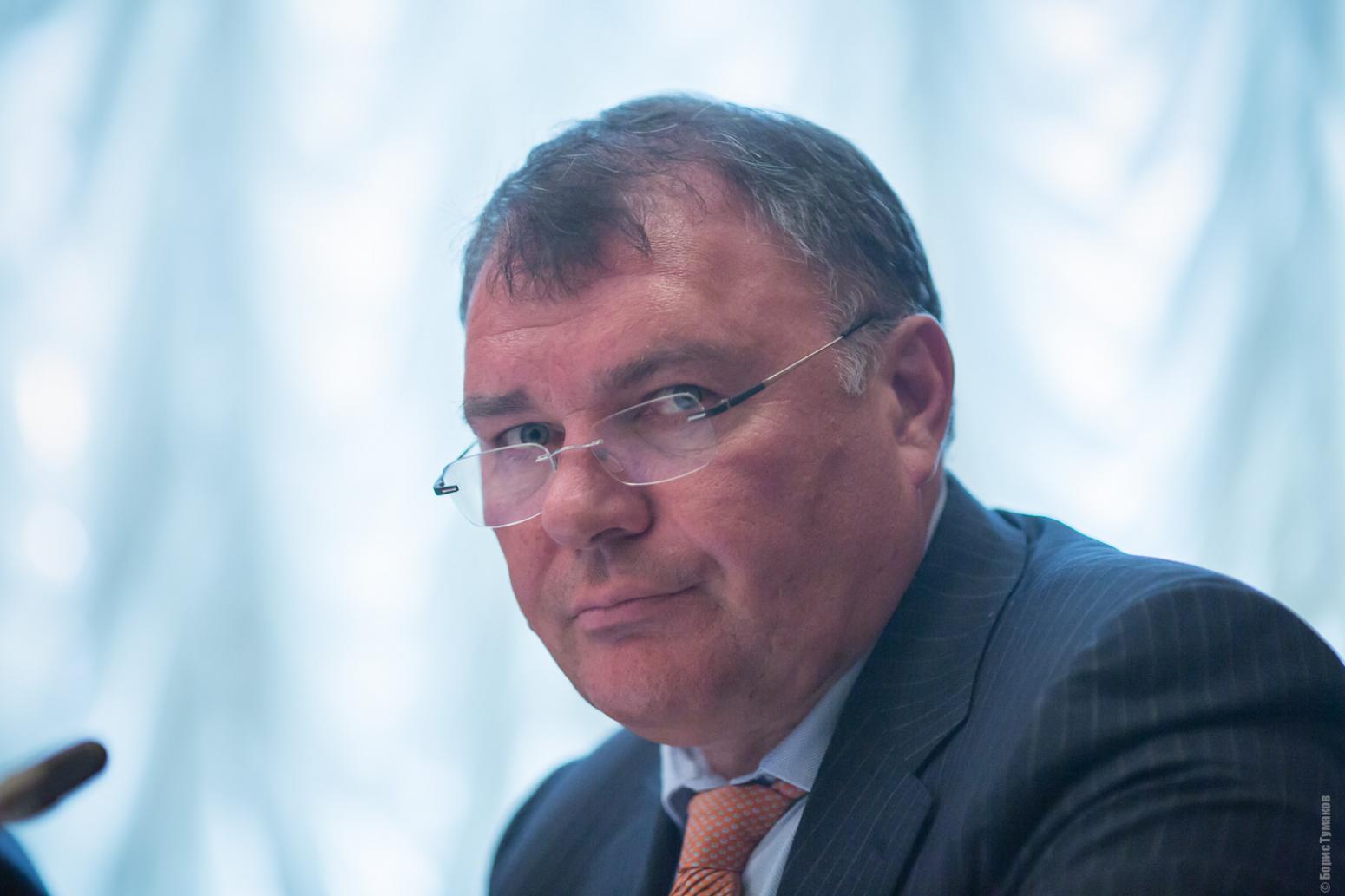 Oleg Makarevich was also controlled by CJSC Kubanoptprodtorg, Dinskaya Meat Processing Plant, a wine factory in Slavyansk-on-Kuban, as well as agricultural enterprises in the Kalininsky district.

Let us also remind you that Mr. Makarevich was directly related to JSC "Garbage Removal Company," where Mr. Moskalenko also surfaced from the Federal Tax Service for the Tambov Region...

And this JSC has a very curious partner - the company "Kubanoptplodtorg," which is also associated with the name of the "garbage king."

But it remains to add that at the end of April 2021, the police department in the Karasun district of the Ministry of Internal Affairs of the Krasnodar Territory extended the orientation to Oleg Alexandrovich Makarevich, born in 1962.

And on the social networks of Krasnodar, a photocopy of the orientation of the search for Oleg Makarevich appeared, sent to all departments of the Ministry of Internal Affairs. This was reported by Kommersant.

And the Investigative Department of the TFR in the Krasnodar Territory confirmed that the document is true: Oleg Makarevich has been wanted since April 21, 2021.

And he, it turns out, is now setting up a new business with might and main in the Tambov province, along with all his pliable friends in uniform with the Kuban.

That is, a clear mind, and a head, professors Makarevich continue to work to strengthen their own business in Russia?

The Moscow Post follows the development of events around Oleg Makarevich and a large, united company.