The "general" line came out to Govyadin Khudoyan

The case against Albert Khudoyan may fall apart as the case of generals allegedly trying to influence the investigation process falls apart. Why are the ex-partners of the businessman Sergey Govyadin and Ildar Samiev unlikely to welcome this?

As the correspondent of The Moscow Post reports, the reasons became known why the investigation failed to find evidence of the guilt of the former deputy head of the investigative department (SD) of the Ministry of Internal Affairs, Major Generals of Justice Alexander Krakovsky, Alexander Biryukov and ex-investigator Alexander Bryantsev in the case of developer Albert Khudoyan.

Evidence of the conspiracy of these persons and representatives of Khudoyan could not be found, the work of the investigation was found to be ineffective. According to the same investigation, Interior Ministry officers tried to break up the criminal case against Khudoyan.

A statement to the police was filed by his former business partner Sergey Govyadin. He claimed that a certain Ashot turned to him with a proposal for $5 million refused claims against Khudoyan - otherwise the case would be broken up.

Mr. Khudoyan is the owner of the development company Optima Development. It owns the OZ Mail shopping and entertainment center and a number of other facilities. He came under investigation in the summer of 2019 at the request of the offshore company Mansfield Executive Ltd, the beneficiary of which is considered Govyadin. Khudoyan was accused of fraud with three land plots during the construction of an elite residential complex in St. Petersburg.

Khudoyan's defense believes that the whole case against him is sewn with white strings, and the ultimate goal of the criminal process may be the raider seizure of his Optima Development business. According to another version, this may be a simple extortion that has gone too far. If at least a drop of this is true, then Sergey Govyadin, as well as his long-term partner Ildar Samiev, may have his interest in putting Khudoyan behind bars.

The assumption that Govyadin could try to influence the investigation has no real evidence. But this cannot be completely excluded. As PASMI wrote (recognized as a foreign agent in the Russian Federation), allegedly among the good acquaintances of Govyadin may be the head of the apparatus of the Minister of Internal Affairs Vladimir Kolokoltsev Alexander Nikolaev.

As if he could provide Govyadin with some services - it may well be that on a reimbursable basis. Through Nikolaev, Vladimir Kolokoltsev could be involved in the situation with Khudoyan, and he could be able to help with the opening or closing of a criminal case.

Who will you behave with

The whole story began in 2015, when Govyadin, together with Samiev, who was at that time a State Duma deputy from Just Russia, through Mansfield Executive Ltd, planned to build a residential complex in St. Petersburg. The question immediately arises, and how Samiev, being the people's chosen one, could do business, because he cannot manage it, all shares should be in trust. However, this is only the easiest of inconsistencies.

The third partner of Govyadin and Samiev on the project was just Albert Khudoyan. He owned Aviasity LLC, which owned the rights to a long-term lease of three land plots on which the construction was to take place.

Govyadin and Khudoyan bought a 50% stake in the Cyprus offshore Spring, which owned Aviasiti. However, according to Govyadin, Khudoyan allegedly violated the agreement and withdrew the rights to lease plots to his new companies Prime Park and Leader LLC.

Khudoyan's lawyers flatly reject these allegations. Earlier, one of the businessman's defenders said that Samiev, as a partner of Govyadin, received shares of Spring, but did not pay anything for them, although he had to invest in the construction of a housing complex. About this writes Legal Report.

If the arguments of the prosecution are really drawn by the ears, according to the defense, then it can be assumed that Khudoyan could be banally "thrown," and then look for opportunities to obtain his assets. Earlier, Samiev was already called a possible co-owner of Optima Development, RBC wrote about this.

Later, this information was not confirmed, but rumors that Govyadin and Samiev were allegedly aimed at getting "to the full" from Khudoyan have been going for a long time. And Khudoyan's statement to the police about a certain Ashot who allegedly offered him money looks too suspicious. Maybe the case against Khudoyan is falling apart, and his former partner does not want this to happen? 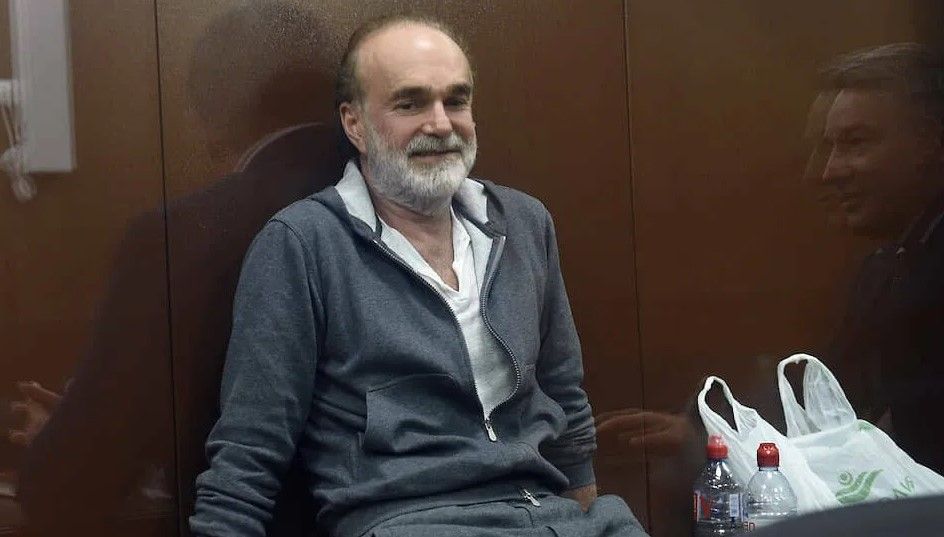 Some "culbites" of the investigation also suggest such thoughts. According to one version, the criminal case of high-ranking employees of the Ministry of Internal Affairs could be a consequence of the internal showdown of the security forces, which Govyadin could use. The whole situation with the generals arose a year after the detention of Khudoyan.

It is known that the case of Khudoyan himself could be transferred to other investigators. Interestingly, this is what: according to Khudoyan's lawyer Alexander Zabeida, at one of the investigative measures, the investigator suddenly took off Khudoyan's shirt, formalizing it as a seizure of material evidence. I decided to check Khudoyan's DNA samples on his shirt for coincidence with those found on bills seized from the generals. About this wrote Legal Report.

It happened absolutely suddenly. And so that Khudoyan did not leave naked, the investigator gave him his shirt. This looks extremely strange, but even without this, the position of Govyadin and Samiev in the case of their former partner, as well as the case of the Interior Ministry generals, does not look convincing. Especially in the context of the huge number of scandals in which they appeared.

Both Govyadin and Samiev are far from simple people. They say that Beef in the past could make acquaintance with criminal authorities, and Samiev's last deputy mandate could pretty much contribute to the development of general business. However, in recent years, he could not help his business partner with anything, since he himself was in a pre-trial detention center.

He got there in 2018 in a criminal case against himself. The investigation believes that he was involved in fraud, including the sale of real estate to football player Fedor Smolov. Allegedly, Samiev sold an apartment worth about 200 million rubles to the athlete when she was in bail. About this writes Lenta.ru.

The first episode in the case concerns fraud in the sale of real estate in the suburbs: Samiev-owned Soratnik LLC sold 23 acres of land and a cottage located on them in the Krasnogorsk district to Risegate Enterprises Ltd. The seller received more than $840 thousand, but did not issue real estate for the buyer. In this episode, a case of fraud on an especially large scale was initiated.

Samiev is also accused of fraud in the sale of elite housing in the capital's residential complex Knightsbridge Private Park. It was there that the striker of the Russian national team Smolov acquired an apartment from Samiev's company. The apartment was pledged to Svyaz Bank, to whom, according to rumors, Samiev could owe a round sum. At the same time, the seller promised to remove the encumbrance from the real estate, but this does not seem to have happened.

In addition, earlier detractors tried to attribute to Govyadin participation in the loss of $25 million taken at Rostinterbank. Then the entrepreneur paired with Ildar Samiev owned Department Store LLC, which owned the Moscow department store in the country's capital. They say that earlier the owner of Moscow could be people close to the Taganskaya organized crime group, and there were many debts behind the institution itself. Allegedly, Beef and Samiev helped redeem these debts from former owners.

In 2013, Department Store LLC took a loan from Rostinterbank for $25 million. But the money did not return at the appointed time. The bank tried to recover them in court, but the credit institution suddenly withdrew the lawsuit. After that, DIA became interested in the bank, which announced the assignment of claims for the amount of debt to the unknown LLC Trade-MK, registered only a couple of months before the end of the loan.

As a result, the money did not arrive at Trade-MK LLC, and the building from Department Store LLC, which was previously pledged to the bank, is not clear how it disappeared from the register, Novaya Gazeta wrote. Nothing is clear in this matter, except that Samiev and Govyadin themselves could turn out something similar, taking advantage of their extensive connections, including in the offices of high Moscow officials. 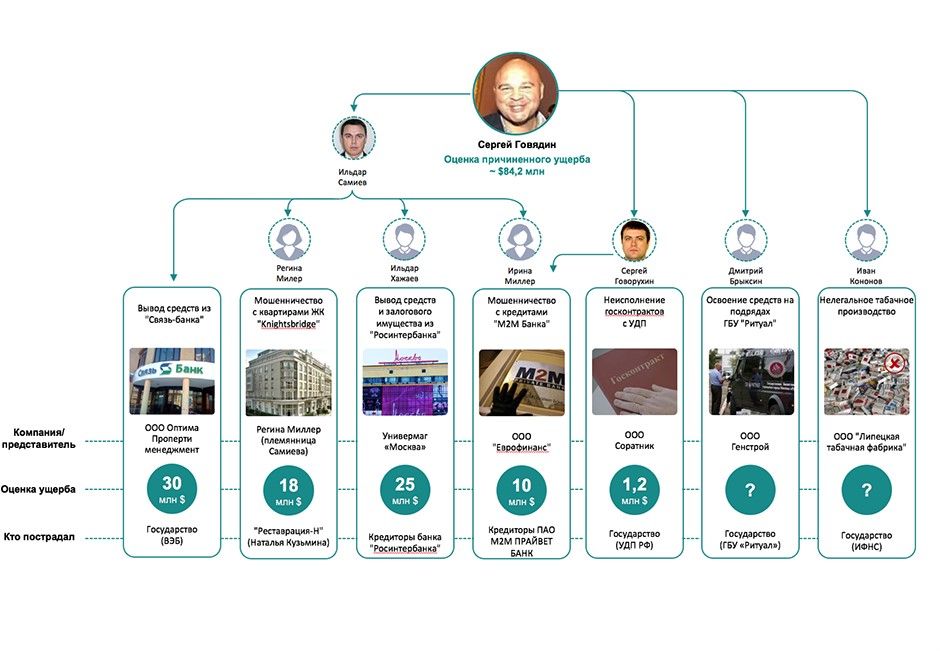 They say this attracts a similar thing. And while the point is yes, Govyadin continues to conduct business. Recently, he "partnered" with the Tashir Group of Companies Samvel Karapetyan - no less scandalous businessman than himself. Together they will be engaged in the construction of a multifunctional complex on the site of the former Pravda cinema on Lyusinovskaya Street.

The company's structure, Tashir Invest, became the owner of 65% of Trading Investment Group LLC, which, in turn, owns Lucinovskaya 57, which owns 0.54 hectares at the address of the same name. Is Karapetyan aware of the press under which another former partner of Govyadin Albert Khudoyan fell?

What will happen next with his case is not clear. It is clear that the matter is clearly stalling, but what is the reason - in the lack of evidence, or in poor work, is unknown. Khudoyan's defense is convinced that the case has no judicial prospects. But there is no doubt that in this case the lawsuits will go from Khudoyan to his former partners. Is that what Govyadin and Samiev are afraid of?