After Dzyadko and Sindeeva "survived" Pavel Lobkov from "Rain," viewers will very soon understand who in the media is actually a "drain tank."

The scandal with Pavel Lobkov exposed the unsightly cuisine of the so-called "free" and allegedly "independent" TV channel "Rain." It seems that with the departure of Lobkov, professional journalists will not remain there at all.

According to the correspondent of The Moscow Post in Moscow, another scandal erupted in the editorial office of the Dozhd TV channel, established and led by the notorious domestic "pen shark" Natalya Sindeeva. Today it became known about the dismissal of one of the leading journalists of the channel Pavel Lobkov. Earlier, on the air of Echo of Moscow, Pavel Lobkov said that they were trying to kick him out of the channel, removing him from all broadcasts.

The leadership of "Rain," like the entire channel, are known for their ultraliberal views. So much so that the ill-wishers of the channel attributed many notables to him, to the extent that the media can act against the interests of their own state, and even receive funds for this from abroad. But against the background of these rumors, the scandal with Lobkov speaks of another thing - it seems that no liberalism and the desire to convey to people the truth, whatever it is, does not smell there.

Lobkov believes that the leadership of the channel, where the first violin, as before, plays Sindeev, tried to lead him to write a letter of resignation of his own free will. The "emissary" of such pressure is allegedly the editor-in-chief of Rain, the scandalous journalist Tikhon Dziadko. Judging by the information about the dismissal, it didn't work out to break Lobkov through the knee, so I had to fire like that.

Who's not stepping in the foot?

As reported on his Facebook "Dzyatko" Pavel Lobkov publicly subjected the channel and its employees to unfair accusations, including publishing private correspondence. Unfortunately, after this, our further cooperation became impossible. At the moment, Natalya Sindeeva is discussing with Lobkov the conditions for terminating his labor contract with Rain... I understand that some of the channel's viewers will not agree with such a decision and will not be satisfied with such an explanation. "

Lobkov, as a decent, professional and honest journalist, answered Tikhon "I think Tikhon, and really should not get into an argument with me, it's better to entrust the channel to you in your reliable hands. Good luck, health and achievements! " 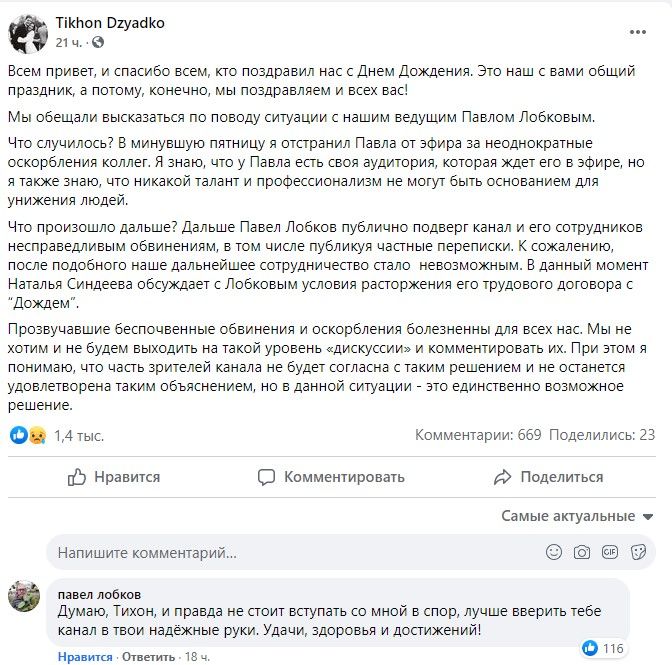 Later, what appeared on the network was presented as the correspondence of Dzyadko and Lobkov. According to rumors, it was leaked by Ksenia Sobchak, also a well-known "liberal" journalist. The truth is, or not - we will not bring it in the material, since this correspondence, no matter who speaks to anyone, is more suitable for a conversation in the turn between two gopniks. So much mat and frank rudeness. However, we will convey the essence: one asks the other to come out "once in a while" with threats of physical violence. Otherwise, the interlocutor defines the opponent as a coward. 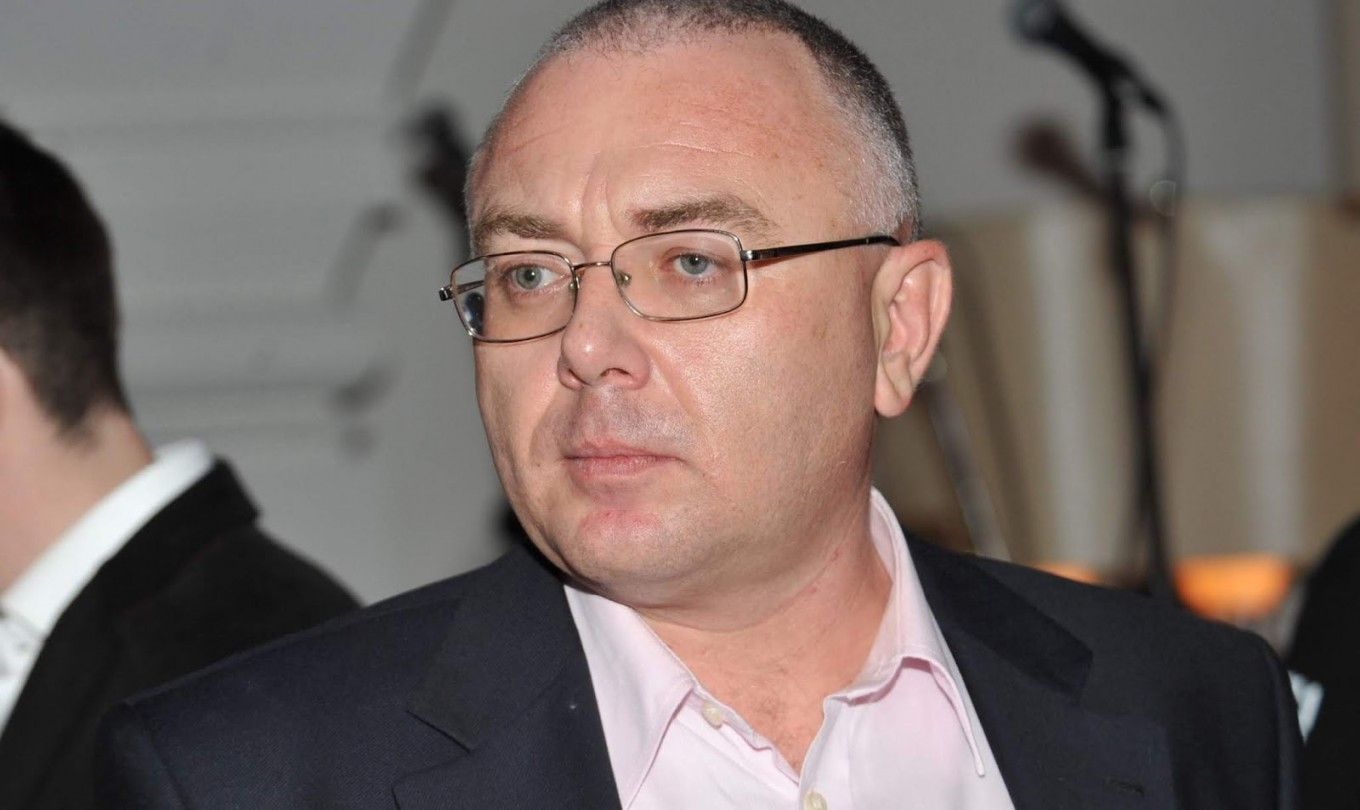 Sobchak herself in her telegram channel called Lobkov "cool." Allegedly, he does not remain silent about the current leadership of "Rain" where the rest are silent or simply leave. Ksenia is not right here, because we are not silent and we, although we are not employees of Rain. No one would have thought to talk about the inner cuisine of colleagues if these colleagues had not at one moment for any reason begun to discredit our publication.

In the past, we wrote in detail about the arrest of the former governor of the Khabarovsk Territory, Sergei Furgal. After that, The Moscow Post received a series of insults in the release of the Fake News program on Rain.

Then the "journalistic grip" of the channel's workers became visible to everyone. Where we conducted a full-fledged journalistic investigation, the presenter Alexei Korostelev, like Zazinsky Shvonder, descended to outright insults without a single fact. The Moscow Post did not leave an insult unanswered.

After the Fake News program got into the story with the NTV channel, translating the plot of television journalists. As a result, YouTube at the request of NTV deleted the plot of the channel about the hero, who was allegedly paid to participate in the program. About this wrote Mediazona.

But there were other, even louder scandals. At the end of January 2014, Dozhd graduated, creating a survey "Was it necessary to surrender Leningrad in order to save hundreds of thousands of lives?" There was no limit to the indignation of Petersburgers. Is it professional work, or outright provocation? But then the channel got away with everything. There were (and will be?) Many more such scandals.

By the way, in this regard, the statement of the creative producer of the channel with a strange life orientation, Anna Mongait, is recalled. The lady stated "I do not like the depressed east, where traffic jams are always, and in the air it smells of misfortune. It seems to me that people do not voluntarily live in the Kapotni area. This is a sentence. " At the same time, Mongait herself lives in the center of Moscow, wrote Elle Decoration.

This statement outraged the residents of Capotni. They felt offended. As VGTRK journalist, deputy of the Moscow City Duma Andrei Medvedev wrote in his telegram channel, "I unequivocally and authoritatively declare that the most real living ordinary people live in Koptevo. In general, of course, it surprises me how fashionable a liberal-fronting audience does not know a country that for some reason, without asking the country for permission, intends to correct, and how afraid it is. People are afraid. " And they, people like Dzyatko, Sindeeva, Mongait are perhaps really afraid. What can not be said about the professionals who survive from the channel.

Returning to Lobkov, rumors had been circulating about problems in the editorial office for a long time, and they concerned not only Pavel. In the current situation, Lobkov wrote a Facebook post on April 23, where he outlined the situation without embellishment. The post was released a few days after the birthday of the channel (April 21), which its employees call "Rainy Day." Thus, the holiday was seriously spoiled by the heated conflict.

According to Paul, on April 23 he was informed of another suspension from the air. Lobkov also mentioned conversations with Sindeeva in the editorial office regarding his person, which he called nothing more than "the trial of Lobkov."

But the most important thing is in Paul's other lines. They sound like this: "Rain" - died. It's a wake. There is no longer a living growing organism, there is a dead "sect" with a cold-eyed Komsomol member and his wife. " It is easy to guess who Lobkov meant by "Komsomol member and his wife." Most likely, we are talking about the main owner of the media holding, Alexander Vinokurov. His wife, Natalya Sindeeva, is the general director of the channel.

The fact that Dozhd and a number of other conditionally "liberal" media are more like "sects," where it can be difficult for a dissident to get into, has been known for a long time. But this fight is not always carried out of the hut. For some time, any publication can be forgiven for the features of editorial policy. But not a single self-respecting media ever brings the matter to the removal of sorrow from the hut, than Dozhd sins.

And blaming Paul here is stupid - apparently, he was simply taken out so much that there was no strength to keep quiet. And most importantly, who is now on Rain to watch and listen to? "Pavel Lobkov was the last professional journalist in the Rain team. Now he is not there, "commented Alexey Kozlov, editor-in-chief of The Moscow Post.

"Hypocrites defending freedom, court holoos - no and there will be no freedom for you. You have voiceless teenagers... obedient and dependent. I am not, "- Pavel Lobkov completed his post. How cute - a person who knows the kitchen from the inside, openly says that there are hypocrites and court holues. That is, what journalists and guests of the channel could (and many spoke directly) blame the Russian leadership, and just people who support different political forces.

About teenagers, the passage is clear. Passionaries, hunting to freedom, but not knowing what it is and what it is eaten with, are ready to work for a penny to protect the same "pseudo-position." Which, meanwhile, does not shy away from breaking the law. It is enough to watch the broadcast of "Rain" recently to find out - there are almost no topics other than the detentions of people involved in riots and illegal actions. 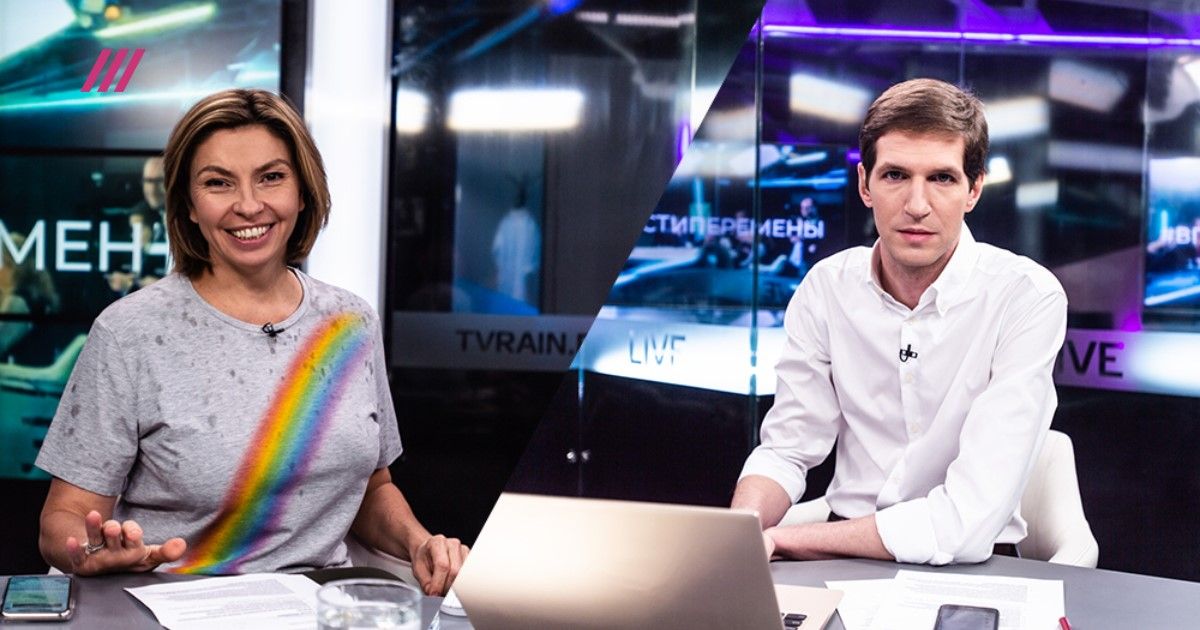 At the same time, earlier "Rain" did not hesitate to receive grants from the state. For example, from Rospechat in 2011 and 2012 on social advertising "All different. All equals "and the transfer of the" Book. " This was reported by Lenta.ru.

A little after Vinokurov and Sindeev sang a song, they say, the channel lives by selling some exclusive goods - caps, shoes, pens. But what about paid subscription, doesn't it bring any income at all? But what about the recorded "oppositionists," like the oligarch Mikhail Khodorkovsky who served his time? And Yevgeny Chichvarkin is a noble "fighter" for "freedom" of the Motherland from abroad?

Won't they help with a penny to support the pants of the country's most "liberal," most "objective" and "independent" television channel? Sure to help. And we will help readers to be aware of events and figure out who is who. Who is an independent and professional media that respects its readers. And who is the "sect" with scandals, Komsomol members and clearly engaged content. And in the end, which of us is the "dump."

This text is an exceptional assessment of the opinion of the author of the publication.