Tell me who your Gref is

Around the entourage of the head of Sber, German Gref, some scandals have been generated lately. Such a frequent involvement of close bankers in them cannot but attract the attention of the security forces.

So the scandal with Gref's former assistant, Dr. Andrei Kurpatov, is gaining strength. We are talking about the story with Alexei Ievsky, who could previously be connected with Kurpatov by close relations. Now he is languishing in Crosses on suspicion of embezzlement of property from Mr. Kurpatov. But they say that this is not the case, but a personal dispute between two men.

Meanwhile, the scandal causes serious reputational damage - by whom would you think? German Gref and Sberbank of Russia. After all, Andrei Kurpatov is not just a popular doctor and writer, but also a partner of Sber - recently, and with the blessing of the bank's leadership, he headed the Laboratory of Neurosciences and Human Behavior.

Apparently, Dr. Kurpatov is investigating the behavioral strategies of his clients for Sber. How much public money this bench could cost is unknown. But Ievsky himself is suspected of stealing a Porsche Cayenne car for 9.3 million rubles, Breguet watches for 1 million 250 thousand and Mercury diamond earrings for 2 million 600 thousand rubles. Apparently, Kurpatov is not bad "fed," including at Sberbank.

But if we take the entourage of German Oskarovich, then the piquant scandal with Kurpatov, albeit bright, is far from the loudest.

After all, around Gref there are enough people with skeletons in the closet, and Kurpatov, perhaps, is the most harmless of them. By the way, no one else presented the Laboratory under his leadership, like the right hand of German Oskarovich, his deputy at Sberbank, vice president of the structure Lev Khasis. At one time, he was a co-owner of Sberbank shares, but in June 2020 he suddenly withdrew from capital.

"We want, thanks to the development of the laboratory, to form an emotional connection with everyone who contacts the products of our ecosystem, and regard this connection as the basis of our competitiveness," Khasis explained at the opening of the Laboratory. 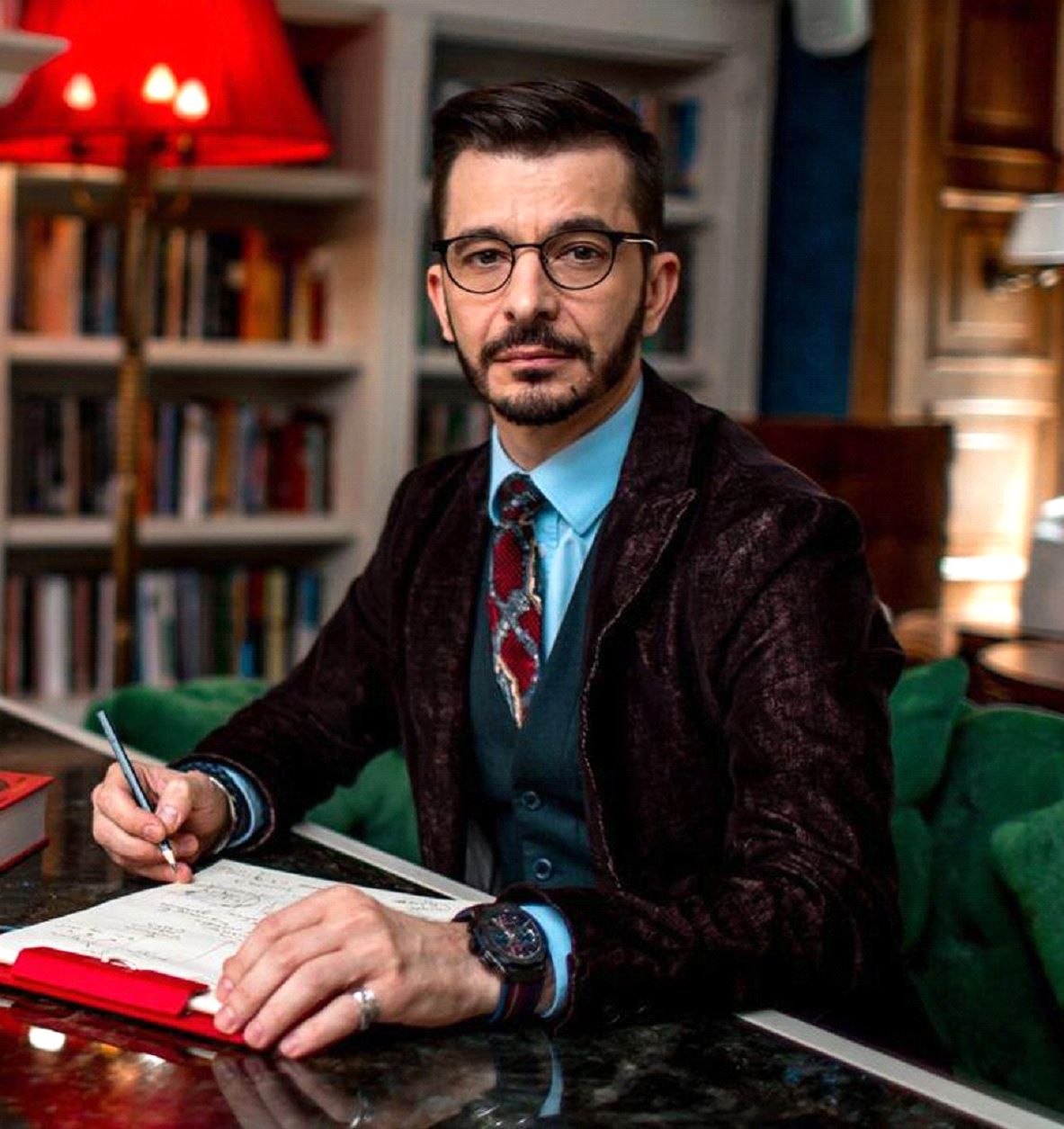 I wonder how Sberbank's competitiveness is affected by the fact that, according to the authors of the Arbiter telegram channel, Mr. Khasis was supposedly on Sberbank's black list for a long time, as a scam? Maybe it's a stuffing. But even without him, Khasis is trying to attribute the fame of the "connected" Herman Gref in the United States. 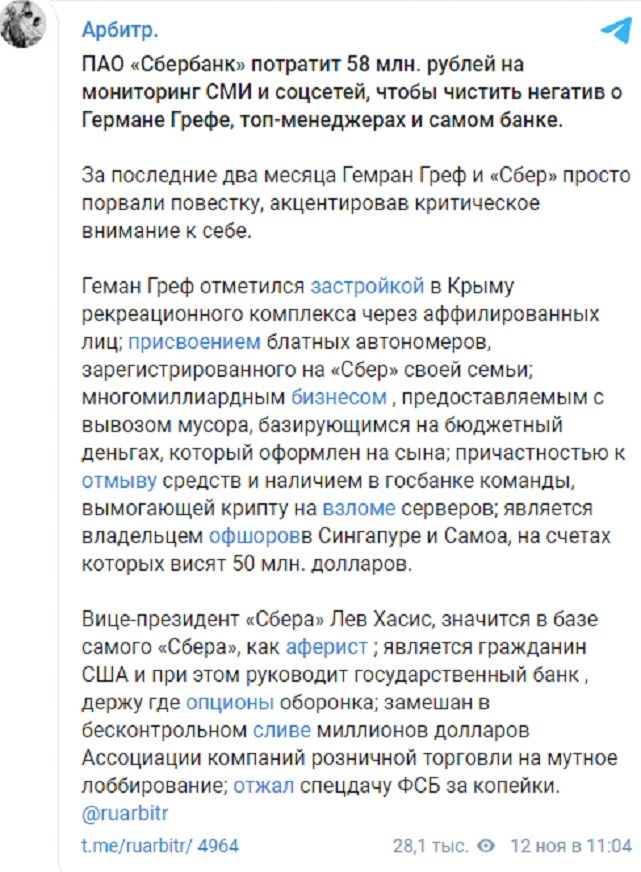 After all, most recently, a high-profile offshore scandal called the Pandora Dossier erupted. It featured influential people from different countries who may have overseas offshore companies. Including in the United States, which are considered to be this Mecca for laundering proceeds obtained illegally.

He was among the exposed and Herman Gref. At least "Ура.ру" writes about it. Allegedly, about $50 million was found in accounts that may be related to GRef in Singapore and Samoa. It is unlikely that he could earn such money for all the time of the civil service.

According to documents, back in 2011, Herman Gref established the Angelus Trust in Singapore to manage family assets for more than $55 million. The trust was subsequently liquidated. But before that, Gref decided to make the manager and beneficiary of the Angelus Trust a nephew living in Switzerland - 24-year-old Oscar Gref, to whom he transferred all assets.

Later, German Gref allegedly redistributed all assets in favor of Oscar Gref. He first became the founder and sole beneficiary of Angelus One Trust, where the assets were transferred. And then I had to become the managing family office (family office). After, in 2018, the assets were transferred to the Grand Investment Trust Kirill Androsov, a former deputy minister of economic development and a long-time colleague of Gref's acquaintance. All this is reported by Echo of Moscow.

What about Hasis? A significant part of these funds could be sent to the States. And here Khasis could be useful, because over Herman Oskarovich who hangs for a year the "Domoklov Sword" of Western sanctions. 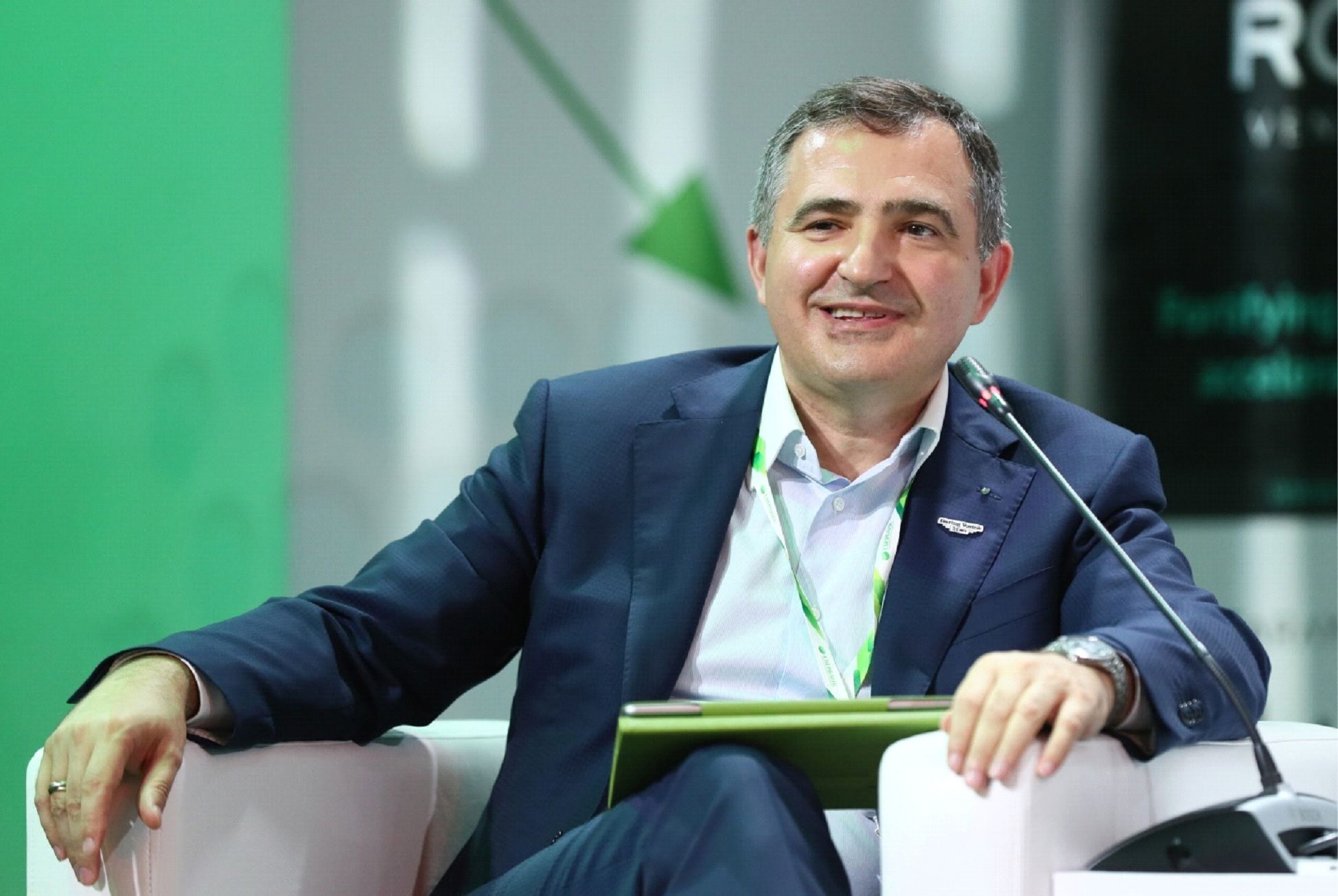 Leo Khasis has rich business experience. In 2011-2013, Khasis was senior vice president of retailer Walmart Stores Inc. Prior to this, for five years he led the X5 Retail Group in Russia, which is generally known for its offshore structure.

Today there are rumors that Khasis allegedly may have an American passport, and in the United States fly on the expensive Gulfstream G650 business jet, as if assigned to Sber. In the bank itself, of course, no one will say about this, even if it were true.

But about offshore, documents are walking on the network, from which we can conclude about the strange behavior of Leo Khasis. In them, a certain Mikhail Kokorich asks for asylum in the United States. It turned out that Kokorich could be the owner of a multibillion-dollar business in the States - the Momentus group. As follows from the document, he owns it with Olga Khasis-Finkelstein-Bespechnaya. The wife of Leo Khasis is named Olga Khasis, and as if her maiden name was Careless. 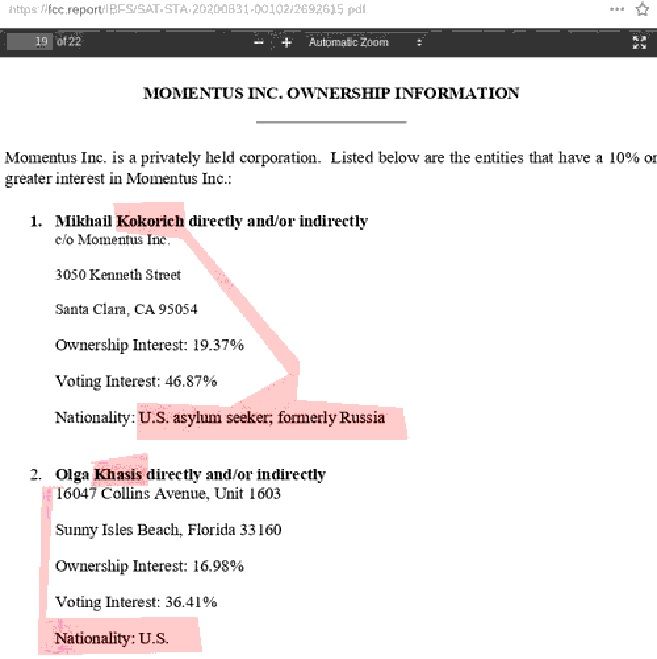 It can be assumed that the wife of the vice president of Sberbank owns a large, multi-billion dollar business in the United States, and her partner asks for asylum in this country. Somehow he does not really get involved with statesmen Hermann Gref and Leo Khasis. Or are they statesmen only as long as they occupy state, and very bread, posts?

It also indicates that Olga Khasis allegedly has American citizenship. Former US Deputy Secretary of Defense John Rod (here is his biography on the Momentus group website), as well as the former head of the Pentagon's space development agency, may be related to the company itself. Could Olga Khasis, or even her husband Leo, not meet with them to discuss certain issues?

In this sense, it is very interesting why German Gref himself will not fall under serious Western sanctions in any way, and as far as he knows, he himself is not banned from entering the United States? For comparison, Gref's competitor from VTB, also a state bank, Andrei Kostin has long been under sanctions, domestic pseudo-fighters with corruption on Western grants worked against him. But no one touches Gref.

No one touches Khasis, but this does not work out with everyone. Until now, the story is rumored with a protégé of German Oskarovich, Marina Rakova. Recently, she came under a major criminal case on the theft of more than 50 million rubles. on state contracts in the field of education. For some time, already under investigation, she continued to hold her post - along with Lev Khasis.

It is believed that it was Herman Gref who oversaw Mrs. Rakova, and then lobbied for her appointment as his own deputy. Meanwhile, their other colleagues were also under investigation. Namely, the managing directors of the Digital Education Platforms division of Sberbank Maxim Inkin and Evgeny Zak. About this writes Novaya Gazeta.

That is, if their guilt is proved, we can say that corruption in Sberbank is systemic in nature, and that there are entire groups of persons. Can Herman Gref not be aware?

The case of fraud on an especially large scale against the official was opened in August. After searches, she should have chosen a preventive measure as a suspect, but she did not appear for another interrogation, turned off the phone and disappeared. The Ministry of Internal Affairs charged her in absentia and put her on the federal wanted list. 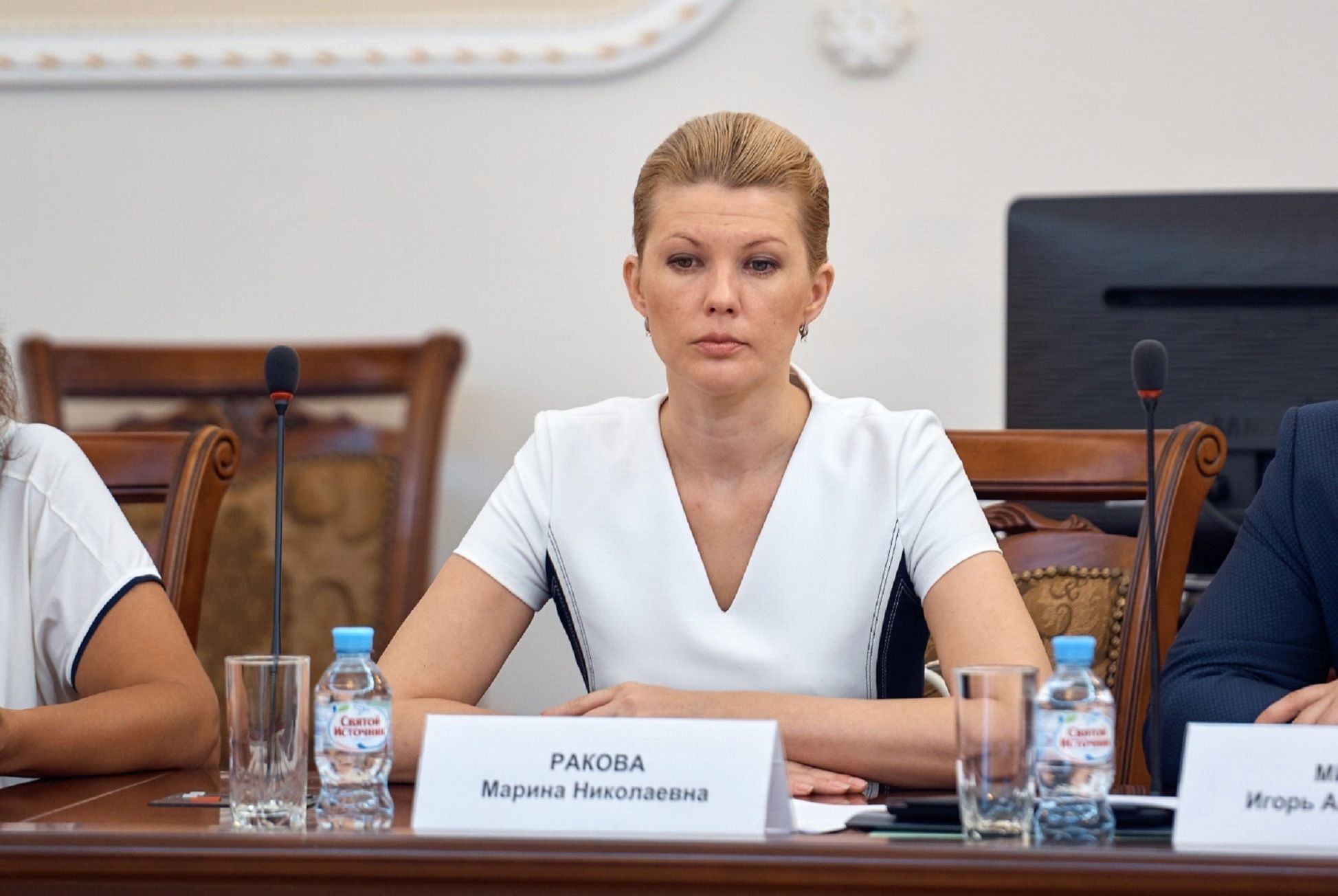 The investigation believes that it was Rakova who lobbied for the allocation of money for state contracts as deputy minister of education, which she held from October 2018 to March 2020. Before working in the ministry, she herself headed the Fund for the Development of New Forms of Education since 2016 and managed its budget money.

In the case of a possible theft of 50 million rubles under state contracts, these state contracts were played on the Sberbank-AST electronic platform. This is a subsidiary of Sberbank itself. It seems that Rakova could be Gref's right hand even before the Sber - in the field of education.

And we show others cartoons

In general, it is surprising for German Oskarovich to put his own people in important places, or at least not strangers for himself. And recently, he also had a whole film studio under control, and which is the Gorky film studio. Recently, she began to lead the boards of Soyuzmultfilm Julian Slashchev, as it is believed, another protégé of German Oskarovich.

Prior to this, Soyuzmulfilm itself fell into Gref's orbit. This happened as a result of the fact that FSUE, which was the studio, created a joint venture with Sberbank on the basis of a subsidiary LLC Soyuzmulfilm. Due to the contribution of the state bank to the authorized capital of this company, the studio will receive additional funds for development. About this wrote RBC.

In parallel with all these scandals, Gref continues to bend his line. For example, Sberbank, under his leadership, raises mortgage rates (and for the second time in a month), which VTB does after it. And, apparently, he is taking actions so that too many Russian clients do not know about the exploits of him and his friends.

According to the authors of the Arbiter telegram channel, an entire campaign has allegedly been launched to clean up information unsuitable for German Oscarovich and Sberbank. The cost is also called - about 58 million rubles, which were spent as monitoring services for social networks.

Apparently, information about Gref's inner circle casts a shadow on both Sberbank and himself.