Subsoil in diamonds: what should be afraid of business partners of the family of the governor of Yakutia?

In the asset of the "diamond" businesswoman Lyudmila Nikolaeva - in addition to her husband, the head of Yakutia, there are unclear cases with Almazergienbank and companies with signs of fictiousness.

According to the correspondent of The Moscow Post in Yakutia, the Arctic Diamonds company (Almar), owned by the wife of the head of the republic Lyudmila Nikolaeva, soon intends to place 15% of its shares on the St. Petersburg Exchange. Thus, the businesswoman, apparently, expects to take advantage of the shortage of diamond supply, and at the same time replenish the already weak family budget.

At this time, her husband Aysen Nikolaev is trying to cope with a wave of problems in the region, and at the same time explain to ordinary voters how it so happened that the wife of the head of the country's diamond region controls one of the largest diamond mining enterprises?..

Of course, all Almar reserves are still under exploration, their mining can begin only in 2024. But those who want to contract are already enough.

Recall that the structure was created in 2015 by immigrants from the ALROSA company Oleg Deripaska, so Almar is often trying to associate with his name.

Formally, Nikolaev has owned shares of the structure since 2020. But in fact, she began to invest in this business back in 2016. The prospects for business are quite clear: the deposits for which the company has a license contain diamonds worth a billion dollars, which will allow Almar to enter the 20 largest diamond miners in the world.

That is, from the middle of the tenth years, Mrs. Nikolaeva had the resources to enter such a highly profitable and marginal business. Clarify: that under her current wife, the head of the Republic, this is far from the only business of the first lady of the region.

Lyudmila Nikolaeva has been engaged in business since 2004, when she received shares in several companies at once: Yakutsnab, Tabaginskaya Sawmill Company and the seller of pharmaceutical products Advanced Medical Technologies.

Until 2016, Lyudmila Nikolaeva was a co-owner of Construction Market LLC and Construction Trading House LLC. Co-owners of these companies are also Nikolai and Milena Krylova, Lena Danilova, Alena Pestryakova.

Today, Anna Aisenovna Nikolaeva is the co-founder of six companies at once (five of them are active). Some of them have government contracts. But much more interesting, for example, is the same LLC "Construction Market." The company leases and manages its own or leased non-residential real estate. And at the same time, assets are already 180 million rubles with 10 thousand rubles of authorized capital. 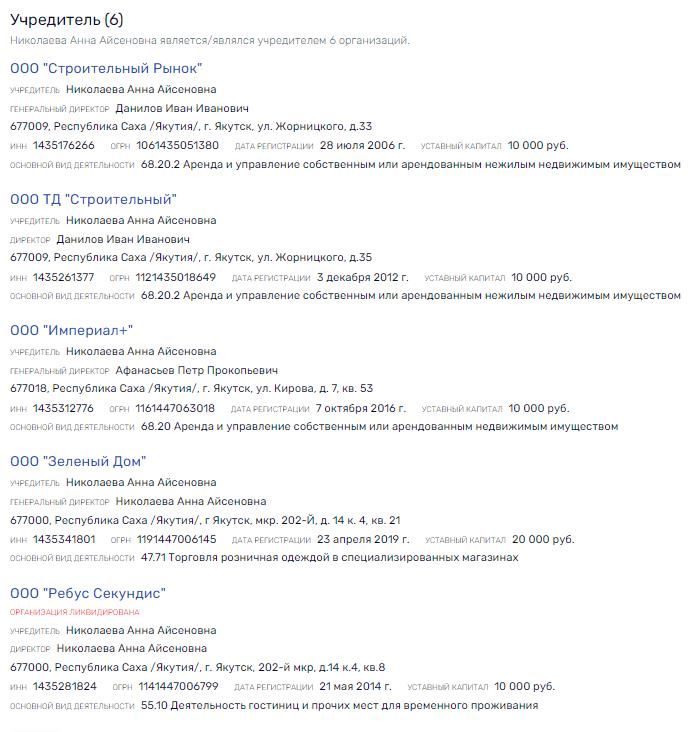 This company had revenue for 2020 in the amount of 45 million rubles, as well as a loss of 13 million rubles. What's more interesting is that the company's losses grow from year to year, while the value of assets increases regularly. Is it time to pay attention to the tax authorities?..

It seems that the daughter of the Nikolaev manages a significant part of the family business empire. But her mother, Lyudmila Nikolaeva, apparently had long dreamed of doing only diamonds.

Since 2005, she worked at Almazergienbank, the authorized agent of the Government of the Republic of Sakha for servicing investments in extractive industries. Could the rise of her husband's political career be indirectly connected with this?.. The question is interesting...

Note that already now the activity of Almar with a large tension can be called transparent. Earlier, Nikolaev was declared the owner of the Arctic Mining Company (AGK), and Arctic Diamonds were only a brand. Now the situation is different: AGK LLC is already a subsidiary of Almar JSC, in which, with 10 thousand rubles of authorized capital, there are no employees (judging by the data in Rusprofail). For 2020, the company has zero revenue, a loss of 17 million rubles and an asset value of minus 63 million rubles. 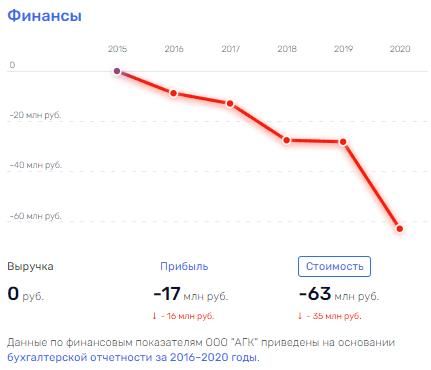 It seems that they could simply withdraw money from the company. What is the investment for then, and how will Ms. Nikolaeva explain this budget "hole" in the subsidiary to St. Petersburg investors?

Almar itself was registered only in 2021, but today its reliability is estimated as "low."

Maybe Almar is brought to the IPO instead of the Arctic Mountain Company, because it does not have such piercing "cons" in its statistics? But if you look at the page of Almar himself, then there it is AGK that is listed as the founder with an 80% share. So structures cross-own each other? Although earlier Nikolaev and partners were precisely part of the founders of AGK.

Investors (and they are not alone) may be interested in Nikolaeva's activities while working at Almazergienbank, the authorized agent of the Yakutia government for servicing investments in extractive industries.

If someone suspects that the bank, 97% owned by the Ministry of Property and Land Relations of Yakutia, may well turn out to be the "wallet" of the Yakut elite (and the Nikolaev couple in the first place), then there are good reasons for this.

Earlier, the bank had many founders of individuals and legal entities, among which was Nikolaev Boris Anufrievich - quite possibly another representative of an influential family. But for some reason, after Nikolaeva left the bank and bought shares in the diamond business in 2020, all these persons, including Boris Nikolaev, were urgently removed from the founders. Looks suspicious.

Today at the bank, whose management adviser is Lyudmila Nikolaeva, something very strange is happening. And this is also a signal to investors. In just one month (from December 2021 to January 2022), the bank lost almost 15% of its profit - this is over 47 million rubles "net." And this is despite the growth of assets by 2 billion rubles!..

But it's only one month, you'll say. In fact, this trend has been going on for many months. If we take the same indicators not for a month, but, for example, from the beginning of last fall, it turns out: the profit outflow for this period was even higher than for December-January - minus 21.78% (or almost 75 million rubles). Where did the money go? Is it not Nikolayeva's diamond business to "inflate" it before placement?.. 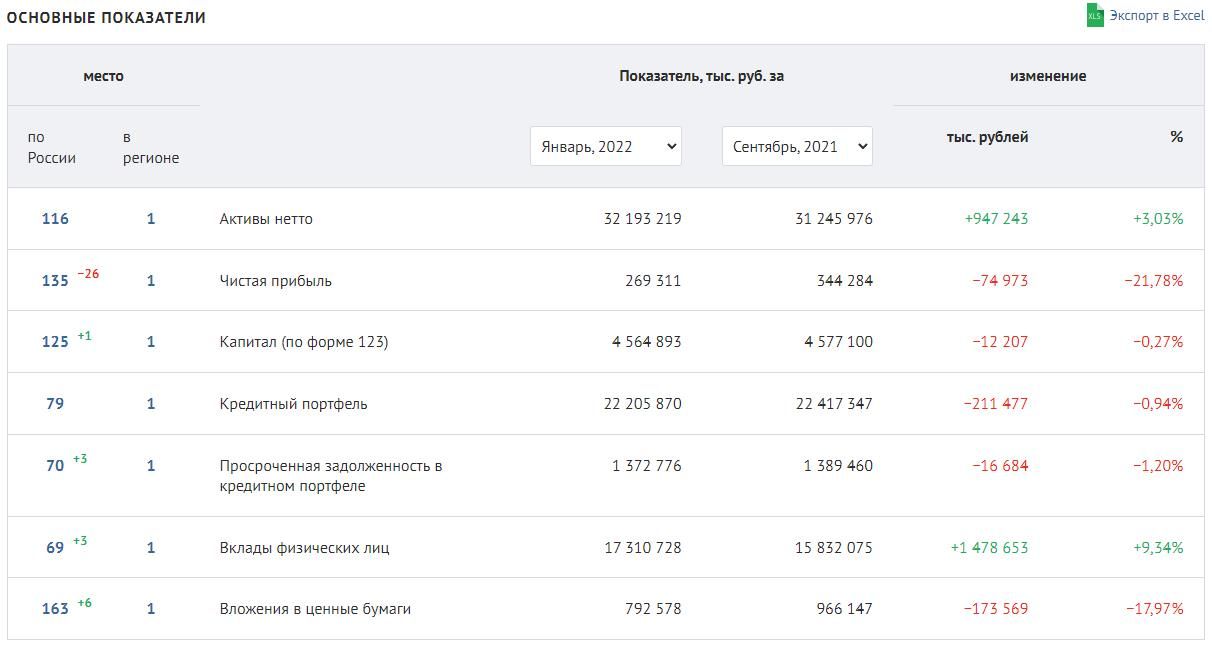 In addition, there are rumors that Aysen Nikolaev can personally hand out instructions to Almazergienbank, to whom and how to issue loans. Earlier, our editors were contacted by readers who complained about the actions of the bank. The story, about which The Moscow Post wrote not so long ago, occurred in 2018. Then "Days of the Far East" were held in Moscow.

The event was held by the Yakutsk Fair company, whose management, according to our readers, was forced to take 30 million loans on security of property at Almazergienbank. As a result, the bank appealed to the court with a request to return the money.

The result is the bankruptcy of the structure. Beneficiaries of Yakutsk Fair JSC Mikhail Fedorov and Nikolai Mukhin were to pay more than 29 million rubles.

In addition, Fedorov was accused of giving a bribe to the Minister of Property Relations of Yakutia Irina Vysokh, appointed under Aisen Nikolaev. About this wrote TASS.

However, in the business community, this was inclined to be perceived, rather, as a method of pressure on debtors in connection with the presence of debt due to allegedly imposed credit. The story as a whole is very murky, but one thing is clear: it is unlikely that Ms. Vysoky would refuse to speak if Chief Aisen Nikolaev asked her to give the necessary testimony on Fedorov.

Constant inconsistencies, lost profits, losses with a huge increase in the value of assets. And with such "luggage" and her husband behind her back, Ms. Nikolaeva plans to go to the St. Petersburg IPO...

But one cannot but recall the results of her husband's work as head of Yakutia, which are difficult to call satisfactory. Perhaps these circumstances should also alert investors. With such a backstop, Nikolaev's partners have business that serious problems can arise in politics.

17 August, 8:28
The gold of Yakutia broke up into Rosatoms