While Dmitry Rogozin is texting on Twitter, dubious purchases worth hundreds of millions of rubles are being made in the subsidiaries of the Roscosmos controlled by him, and their management one by one falls into the hands of the security forces. This is reported by the correspondent of The Moscow Post.

Far from all the money are simply in the accounts of the state corporation and its subsidiaries. A huge amount of them is spent in such a way that it is impossible to characterize otherwise as "goes out of the window". We decided to study and analyze a specific example - purchases of a subsidiary of Roscosmos - JSC Strategic Control Points Corporation (Korporatsiya Strategicheskiye Punkty Upravleniya), and see what on and how they spend money there.

The structure has a wide range of activity, connected, as you might guess, with scientific research, construction, operation and maintenance of strategic control points. The Head is Stanislav Suvorov, who was appointed there in August 2019. He was appointed amid a high-profile corruption scandal.

In November 2019, the investigation opened a criminal case after checking the financial activities of the same JSC Strategic Control Points Corporation. Suvorov's predecessor, Vladimir Polyansky, was suspected of illegally paying himself a "golden parachute" of almost 5 million rubles, as well as illegal bonus awards to heads of departments and non-payment of taxes in the amount of 72 million rubles. This was written by Izvestiya.

Thus, even then it was clear that something was wrong in the Corporation. Have Rogozin’s managers drawn any conclusions?

Now let's take a look, what is this 1.7 thousand state contracts, what is the state money used for?

It turns out that the corporation that is engaged in scientific research, construction of buildings and much more, can not buy air and rail transport tickets for itself, as well as book hotels for its employees on business trips. In September, a public procurement for these purposes was carried out, its cost was 12 million rubles.

Think about it, 12 million for what any secretary of any organization can do. At the same time, the number of employees of JSC Strategic Control Points Corporation is not disclosed. It is quite possible that this is a state secret. What if it became a secret on purpose that there were fewer questions about dubious operations with budget funds?

The corporation's counterparty for this purchase was not disclosed. Maybe a state secret, or a regime enterprise. But what is the regime when purchasing plane tickets and booking hotels? Another detail - the purchase was made from a single supplier. Without competition. Is it only one (secret) office that can provide such services in our country?

Further even funnier - a similar contract, also from September 2020, but a little different: the provision of services for organizing business trips. It was signed in April 2020, the deadline is until the end of the year, and it is in the status of execution. The cost is 12 million rubles.

Tell me, what is the difficulty in organizing a business trip by the personnel department, especially since such a corporation should have a large, full-fledged one? Not to mention that such management trips are generally made by their secretaries and personal assistants.

As you may have guessed, it is not known who exactly became the counterparty of the corporation. But this time, at least several companies participated in the purchase - the results were summed up when considering the second parts of the submitted applications (this means that there were more than one of them).

There are other purchases that could be explained at least in some way, if we did not know that such institutions are security facilities that must be protected by the state and an army of government guards and lawyers.

Let’s have a look at the purchase "Provision of services for the defense of protected objects from illegal encroachments" dated December 31, 2019. The cost is more than 38 million rubles, the counterparty is hidden. What and from whom should be protected there, taking into account that ordinary private companies cannot be allowed to protect, say, strategic control points for satellites and the like.

We scroll through the state contracts further, and in 2019 we find a whole series of purchases on the already mentioned topic: travel arrangement. The contract dated January 1, 2019 for 14 million rubles is still under execution. What is this supposed to mean? Not organized during a year? Moreover, other similar purchases were also made.

In total, the new management has already spent 62 million rubles on travel, hotel tickets and security.

The next similar contract is dated July 2018. More than two years ago. The cost is 10 million rubles. And it is also still on execution. The difference is that there is a known counterparty, Aviatransagenstvo. And it's very, very interesting.

The authorized capital of this company is only 10 thousand rubles. Revenue for 2019 amounted to 27 million rubles, but the structure did not show a profit. On the contrary, it showed a loss of 764 thousand rubles, and this is at zero asset value.

And the most interesting thing is that it has state contracts for 28 million rubles - and it is with JSC Strategic Control Points Corporation. Taking into account the company's revenue, we can assume that the contract with the corporation is its only possible revenue item. Another state contract - one, and only for 30 thousand rubles, was concluded with the Pushkin Museum in Moscow. 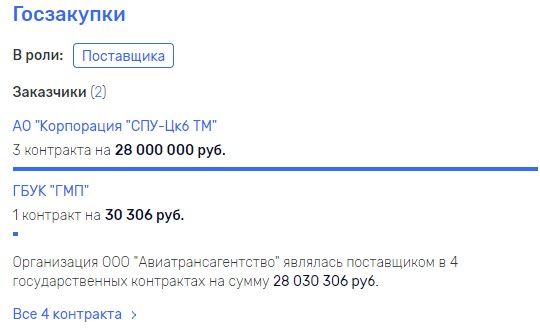 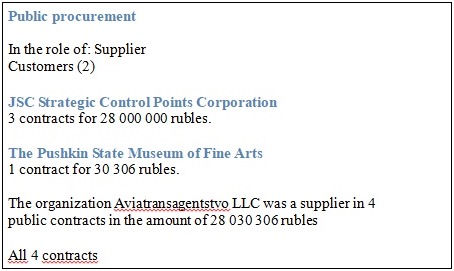 Apparently, the agency employees went on a tour. Maybe they took the corporation's employees with them, because they organize trips for them. More seriously, it seems that this is a frankly fictitious company that can exist solely to be a counterparty to the subsidiary of Roscosmos, and sometimes absorb budget funding. But then how can the company suffer losses, or the money is simply withdrawn from there to God knows where?

Ii is curious, if other contractors under similar contracts were revealed to us, would there also be firms with signs of fictitiousness? And they have a dime a dozen similar state contracts. But we took only one structure under the jurisdiction of Roscosmos, out of dozens and dozens.

Meanwhile, as stated in the Ministry of Finance, the efficiency of funds spent by Roscosmos should be increased. Thus, the cash execution of the corporation's expenses as of August 11, 2020 was 35.3%. A significant amount of Federal budget funds – about 180 billion rubles - simply lies on the accounts without movement. This was reported by RIA Novosti.

Apparently, the subordinates of the Head of the Ministry of Finance Siluanov do not know that Rogozin's subordinates have a completely different view of the efficiency of spending funds.

Summarizing the above, against the background of the same scandal with the Polyansky’s "golden parachute" and these state contracts: what is the effectiveness of budget spending in the offices subordinate to Roscosmos? It seems that on the part of Rogozin, this may be just empty chatter. Chatter at a cost of tens of millions of rubles.