"Sprouted" Grib in the "patrimony" of Gusev

The company of lawyer Griba continues to receive hundreds of millions from the Judicial Department of the Russian Federation, and he himself calmly "solves issues," despite many scandals associated with it.

According to the correspondent of The Moscow Post, the company of the famous lawyer Vladislav Griba LLC "Publishing Group" Lawyer "received several large state contracts for the purchase of literature for the Judicial Department of the Supreme Court of the Russian Federation. The price of the issue is more than 97 million rubles, for which the entrepreneur agreed to put the publications Russian Judge, Criminal Procedure, and others.

The rumors ask themselves why would Alexander Gusev, the head of the department and the closest associate of the Chairman of the Russian Armed Forces Vyacheslav Lebedev, send almost a third of a billion to purchase literature alone from a simple merchant?

But the businessman is not easy, and ill-wishers call Gusev almost the patron and defender of Mr. Grib. After all, the latter is a well-known lawyer, is the vice president of the Federal Chamber of Lawyers, a member of the presidium of the Association of Lawyers, at different times he was a member of various public councils at the Ministry of Internal Affairs, the FSB, the Accounts Chamber, the Federal Penitentiary Service, and the Ministry of Justice. 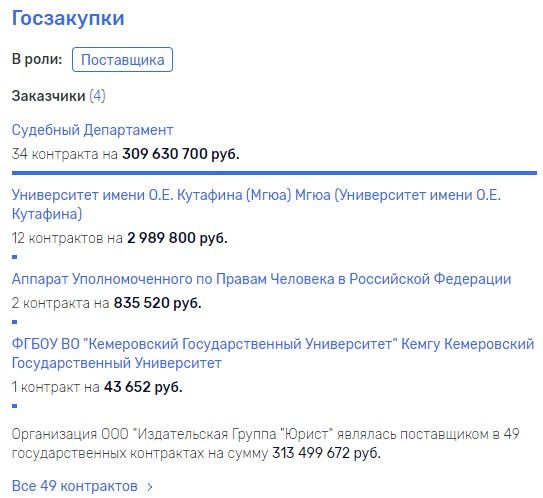 Almost all state contracts IS Lawyer - from the Judicial Department of the Russian Federation. Coincidence?

He knows many powerful people who can solve the most sensitive issue. True, he himself, it seems, may not have expert competencies, but he is trying to bulge them where it turns out. In the past, for many years, Mushroom worked in the Public Chamber of the Russian Federation as deputy secretary, and spoke on various issues in the State Duma. There he made a lot of noise.

For example, in the State Duma from OP Mushroom advocated limiting Wi-Fi points in cities. According to him, through Wi-Fi in a cafe you can blow up a nuclear plant. According to Echo of Moscow, he was immediately objected that it would not work. Like, the safety system of nuclear power plants is not connected to the Internet at all. "I don't understand this system," Mushroom retorted. - We do not have nuclear power plants connected. And somewhere - connected. " "Nowhere are they connected - these are IAEA standards," the audience again began to object.

In general, he did not have experts, and he eventually left the OP in 2014. It is believed that due to a conflict with the then Secretary of the OP Alexander Brechalov. According to the official version, he decided to focus on other areas. But there were rumors about a completely different one - allegedly Mushroom, whom detractors call a "solicitor" for his eyes, himself really wanted to occupy the chair of the OP secretary. But his colleagues did not support him, because of, let's say, an ambiguous reputation. And Bolivar could no longer withstand two - here is the Mushroom and went to free bread.

However, not for long. He immediately occupied a lucrative niche: he was appointed public ombudsman for ensuring the rights of entrepreneurs to a fair trial and defense in the European Court of Human Rights (ECHR). This new position appeared in the structure of the institution of the Commissioner for the Protection of the Rights of Entrepreneurs, which is headed by Boris Titov.

The latter is also a well-known "lobbyist," as it is believed, of the interests of entrepreneurs. Only now many entrepreneurs who returned on Titov's list to the country again fell under criminal prosecution.

Note that the already mentioned LLC "Publishing House" Lawyer "was created back in 2007, long before Griba left the OP. But only after 2014 did the structure begin to show any profit, "rising" on state contracts. In total, Vladislav Grib is the founder of about 30 organizations, many are public. And many of them are literally covered by a variety of grants and other financial support measures. 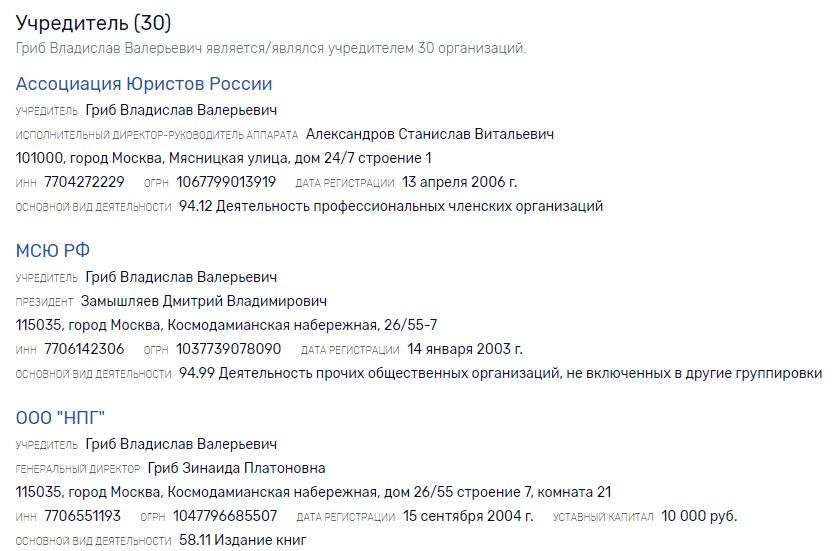 By the way, here we again stumble upon the judicial department of the RF Armed Forces, where Griba's company "Lawyer Publishing Group" had previously glowed. Only now another structure is LLC Legal Periodics. Having an authorized capital of 10 thousand rubles and a zero value of assets, the company managed to earn almost 23 million rubles on state contracts. 6.2 million rubles of which are under four contracts with the Judicial Department itself. And what, there is little literature from IS "Lawyer" to Alexander Gusev?

Grib himself for his eyes continued to be called "resolute," bearing in mind his possible role in the likely resolution of judicial and other disputes using ties and official position.

The achieved status of "omnipresent assessor" and "all-leading chairman" allows Grib to offer the services of a lobbyist, freely participate in the distribution of various grants and other easily recoverable income. About this writes the publication Wek, suggesting that the most "bread" section is the "cooperation" of Mushroom just with the judicial corps.

Vladislav Grub participates in training programs for arbitration judges and even serves on the scientific advisory council at the Moscow Arbitration Court. Such proximity to people in mantle, authorized to solve economic issues for billions, gives Mushroom could give reason to declare his ability to achieve "correct" verdicts. That is, detractors are trying to attribute to Mushroom.

And how not to ask the question - such activity of Griba in the judicial direction and guaranteed his company stable receipt of state contracts from the department of Alexander Gusev?

However, they say that Mushroom prefers to act not with his own hands, but using trusted supporters. One of them is his colleagues in the Youth Union of Lawyers, which Grib himself founded at one time - Alexander Shmakov and Dmitry Zamyshlyaev. The network is full of stories where these names appear.

For example, the author of the blog marija_vera on the Living Journal platform claims that allegedly Messrs. Shmakov and Zamyshlyaev could have unofficial contacts with judges of the Moscow Regional Court in order to "solve issues with them." Even printouts of their telephone conversations are given, the authenticity of which, however, cannot be confirmed.

It has been known about Shmakov in the press for a long time, because he was also a member of the Public Chamber of the Russian Federation. This position journalists Wek call "cover" for a specialist close to Gribu. In their opinion, in informal circles, he (Shmakov) is allegedly better known as "decided," able to "negotiate" with judges throughout the country. As if even the price tag for possible services was called - from 150 to 300 thousand dollars, or interest on money won in tax cases.

Mr. Mushroom is not alien to other types of support. According to the authors of the site Kompromat.ru, allegedly by 2013 alone, NGOs associated with Vladislav Grib "mastered" about 100 million rubles of grants received from the budget.

Earlier, a similar publication was allegedly seen on the Vedomosti website. But, apparently, they were indicated - there is no such page at all. The rumors immediately suggested that if she was, then she could be removed at the request of Vladislav Griba himself. After all, some of the presidential grants - what would happen if the Head of State saw who was leaving the money?

A few years ago, the authors of the Kompromat1 website claimed that allegedly a "whole gang of lawyers" got into the development of the security forces, who committed theft of multi-billion dollar property by using their knowledge, connections and skills. As if the criminal nature of the activity disguises itself as ordinary economic activity, the purchase of the necessary court decisions and bribery of law enforcement officers who at different times go on the trail of the gang are actively used.

Among the persons who may have come to the attention of the security forces, the characters already memorable to us were Alexander Shmakov and Dmitry Zamyshlyaev, and Vladislav Grib himself was called the "roofer" of the scheme. Years passed, but all this remained in words, no charges were brought against any of them, and in general a lot looks like a duck.

Meanwhile, according to the Referee telegram channel, it was allegedly this mythical "gang of lawyers" that was involved in the extortion of 85 million rubles from billionaire Grigory Berezkin.

But she is too "beating" with other materials and facts that are on the network for Mushroom and his colleagues. And the similar love of the Judicial Department of the Russian Federation for the company of Griba cannot but be alarmed. Maybe it got to the point that the judges of the Armed Forces can solve their questions through Mushroom? Then there are big problems in the judicial system of the Russian Federation.