The case of Deputy Minister Anatoly Tikhonov may bury the career of Chelyabinsk Governor Alexey Teksler. Could the official be involved in possible large-scale theft on the project of development of SIS FEC by LANIT?

According to the correspondent of The Moscow Post, following the results of the last election, Governor of the Chelyabinsk region Alexey Texler, managed to retain control of the Parliament, where United Russia faction, with his support, won 40% of the seats. Meanwhile, the head of the region should worry about something else - he may become one of the defendants in the case of Deputy Energy Minister Anatoly Tikhonov.

Tikhonov was detained on suspicion of embezzlement of 600 million rubles during the creation of the Fuel and Energy Complex, for which almost a billion was allocated. A significant part of this amount could have been stolen. And the point is that Alexey Teksler is himself a former Deputy Minister of Alexander Novak in the Ministry of Energy, and also actively engaged in this topic while working in Moscow.

Earlier, the Vice-President of the LANIT group of companies Viktor Serebryakov was detained in the same case. According to our sources, right now he can give evidence that could form the basis of charges against the Chelyabinsk Governor.

The LANIT company - has long been heard of. This is one of the leading IT companies in Russia, but observers have long believed that this alone cannot explain its incredible success in the field of public procurement. Today, the company's portfolio includes contracts worth more than 32 billion rubles. It is also a key developer of SIS FEC - a digital copy of the Russian Fuel and Energy Complex.

The contract with LANIT was signed on behalf of the Russian Energy Agency, which was previously headed by Anatoly Tikhonov. Senior officials of the Ministry, including Alexey Texler, were supposed to supervise the work.

The cost of the system development contract with LANIT is 607 million rubles. The total amount spent on the system over the years is close to a billion. It was supposed to be put into operation in 2015, but it was not possible to fully launch it in 2017. The Accounts Chamber of the Russian Federation had a lot of questions about spending budget funds on the system, and first of all, about the failure to meet deadlines.

Moreover, the claims arose not to LANIT itself, but to the customer in the person of the Russian Energy Agency, which was previously headed by Tikhonov. And which was directed and supervised, as it is not difficult to guess, by the Ministry of Energy through Novak's Deputy Minister Alexey Teksler. By the way, the latter has not just a working relationship with the Minister. It is rumoured that they are good old friends, moreover - that Texler is the godfather of Alexander Novak's daughter.

The full report of the Accounts Chamber can be found here. We will mention only a few excerpts from the document. The auditors found that the expenditure of budget funds was carried out in serious violation of legal requirements.

Among the most serious is that the planning of budget allocations for the operation of SIS FEC was carried out by the Ministry of Energy of Russia without taking into account the actual terms of its creation. As a result, the money in the amount of 271.9 million rubles for the operation of the system, provided for in 2016, was not used for its intended purpose.

Where and how they went is still an open question. However, Tikhonov's detention may provide an answer. Another interesting thing is to look at the financial statements of JSC LANIT for the same period of 2015-2016. There are many interesting things there.

At the same time, as already mentioned, the company regularly wins in state tenders of various departments. Among the largest customers are the Russian Treasury with a portfolio of 5.1 billion rubles, the Moscow Department of information technology with 3.6 billion rubles, and the Pension Fund of Russia with 2.4 billion rubles. 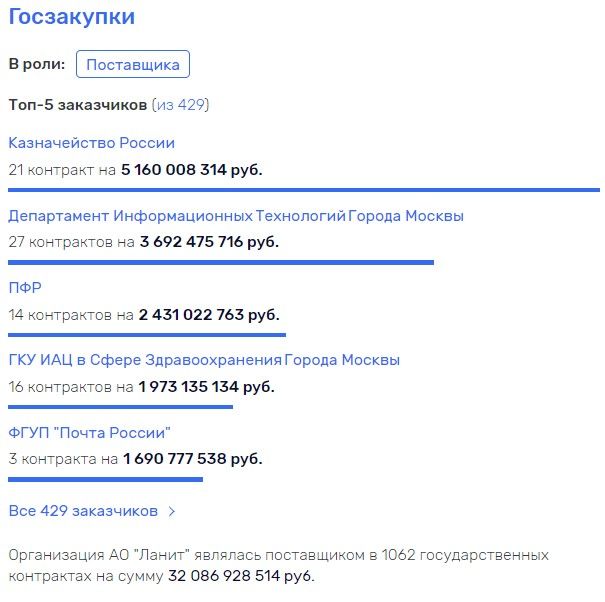 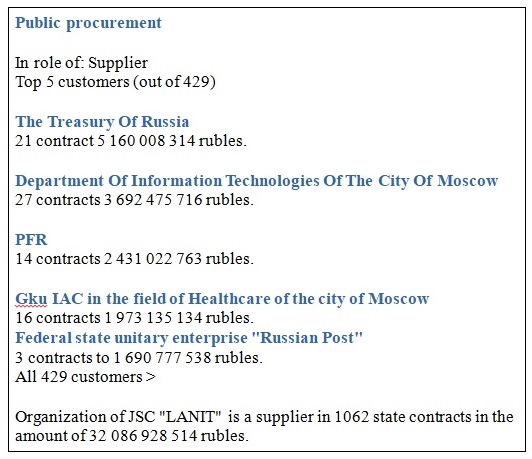 It's a curious why law enforcement wasn't interested in it earlier. If it received contracts for payoffs, and the money was withdrawn from the company, the question is where. And also - where could the money that LANIT could pay for obtaining a contract for the development of SIS FEC have gone?

According to the Znak publication, in the past, Deputy Energy Minister Anatoly Tikhonov and Alexey Teksler could use the services of one and the same Cyprus offshore company - Neocleus Trust Company LTD. The company is engaged in legal consulting in the management of assets withdrawn from other countries. Allegedly, this is where the traces of money should be looked for - if its theft can be proved.

However, it is rumoured that during the period of work in the Ministry of Energy, Tikhonov and Teksler had extremely strained relations. Allegedly, the latter even tried to "dig" under Tikhonov, convincing Novak to remove Tikhonov from work. As if because he took a bribe for signing contracts with LANIT. However, it didn't ended up with nothing. Both functionaries could be responsible in unseemly affairs and simply agree. Why bite the hand that feeds you if you can always share a little?

It is curious that just during this period, in 2015, Alexey Texler, with the rank of Deputy Minister, received a disciplinary sanction from Prime Minister Dmitry Medvedev. RBC wrote about this.

It was later withdrawn, though the essence of the Head of Government's claims against Texler was not disclosed. According to rumours, he received a scolding for the mess in the projects under his jurisdiction, as well as for the endless undercover games, during which he probably tried to pull the blanket over himself.

There is still one more question about the situation with LANIT. In the past, the ex-owner of JSC LANIT Georgy Gens could tell a lot of interesting things about the company's contacts and the possible interest of high officials from the Ministry of Energy in them. 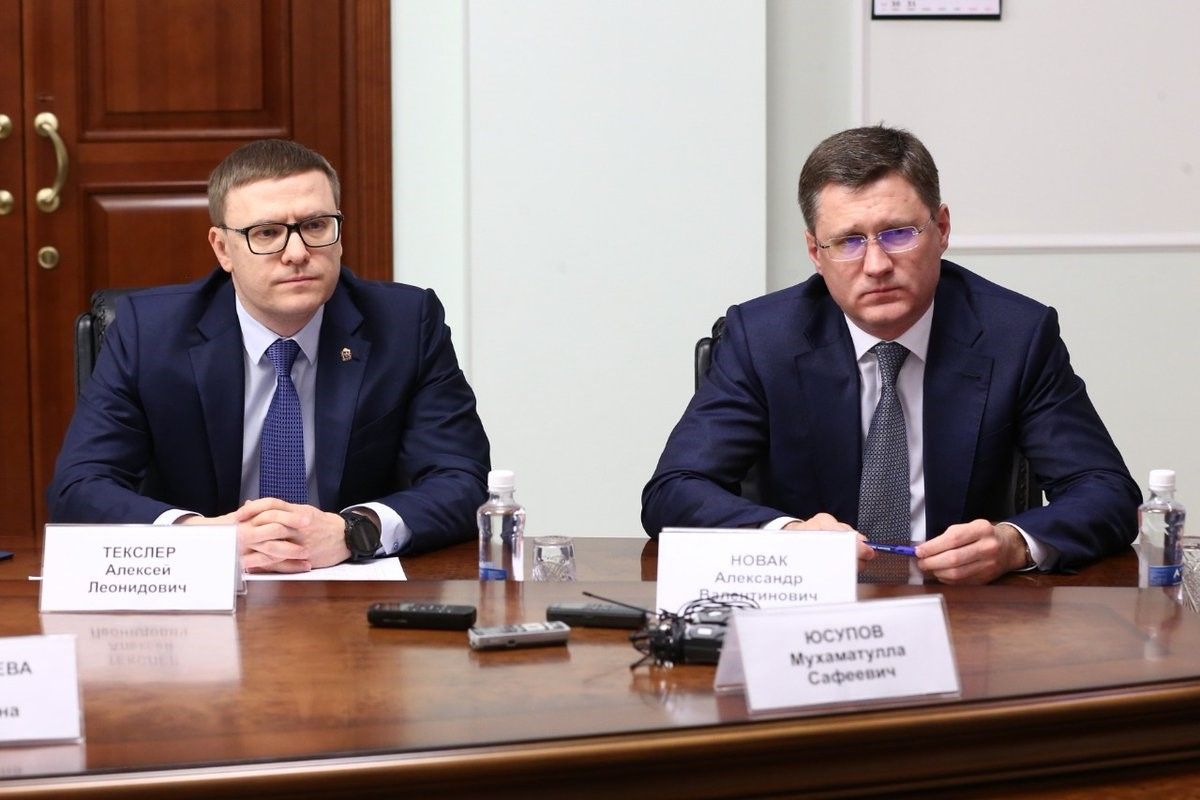 Have Texler and Novak always been more than just colleagues?

He could tell, but he can't, because in 2018 he died under circumstances that were not fully clarified. Officially, he died while downhill skiing in Kamchatka. Allegedly, something was wrong with health. But he never complained about his health. Many do not believe that his demise was natural.

Veteran of the "aluminum wars"

Questions to Teksler have been arising not for the first year - already in the rank of Governor. His appointment to the Chelyabinsk region was completely unexpected - many recommended Texler to a warm place in Murmansk instead of Marina Kovtun. They say, that he really did not want to say goodbye to his previous job – it was too bread position.

The Chelyabinsk region is more than a problematic region. And they were waiting for someone stronger, but, apparently, there were much more serious figures than ordinary voters behind Texler in the region. For example, detractors believe that Alexey belongs to the group of influence of Head of Rostec Sergey Chemezov.

He was studied thoroughly and this study revealed a lot of interesting things. For example, as reported by the  Journalistic Control back in 2016, the FSS checked the estimates for the construction of the Crimean energy bridge - another large-scale project for which Texler was responsible.

It turned out that the project had lost some of the 47 billion rubles allocated for it. Then the top Manager of FGC UES Valery Goncharov was detained. It was rumored that Texler himself was under suspicion. However, it is now obvious that if he was "engaged", then he managed to "bounce back".

It is rumoured that Texler acquired his speed long before that, while working for Vladimir Potanin's Nornickel, to which he gave seven years of his life. Having gained experience during the famous aluminum wars between Potanin, Prokhorov and Deripaska, in 2009 Teksler found himself on the Board of PJSC Polyus Gold.

Under the strict guidance of the latter, the company managed to acquire a stake in KazakhGold Group - so much so that in the course of the transaction, the shares fell by half, by 187 million rubles. This was also reported by Journalistic Control.

Texler did not bear any responsibility for this. But it was noticed by officials, who liked such visionary personalities. It has already been mentioned that in the rank of Deputy Minister, there were enough complaints about him. However, even after the removal of the penalty from Dmitry Medvedev, he was in no hurry to regain the trust of his superiors. May this trust be simply expressed in a different way?

A year after that situation, a scandal broke out again: several European companies complained about the poor quality of Russian Urals oil. RBC wrote about this. The topic was curated, again, by Alexey Texler.

After checking, it turned out that the percentage of sulfur in the oil that was transported through the Druzhba pipeline exceeded 1.5%, although it should be 1.3%, and the density was 31% instead of 32%. At the same time, Texler himself refused to admit the obvious fact - allegedly, there were no threats to reduce the quality of oil. Whether it was simple negligence, an agreement for a payoff with oil suppliers, or something else, it is difficult to understand now.

In addition, in 2015, Texler was listed on the Board of Directors of the long-suffering Bashneft. There, he may have been involved in a dubious deal with oil trader Concept Oil Services Limited. Bashneft supplied crude oil at an undervalued price to an offshore intermediary from Hong Kong for 81 billion rubles, or 20% of its own assets.

It is wondering, who would put such an official in charge of an entire region? And yet it happened. And for several years at the helm of the Chelyabinsk region Texler was noted in nothing but large-scale scandals. For example, one of the most acute problems is the poisoning hole of the Korsinsky section, which poisons local residents, and is still in its place. They can't reclaim it for three years - both before and after Texler came to power.

In light of recent events, the Governor of the Chelyabinsk region may not have time to do this (and Texler promised). As they will not have time to complete the Cathedral in Chelyabinsk, the contract for which the head of the region safely gave to local oligarch Alexander Aristov.

Maybe it's for the best - if he doesn't make it?

17 September, 8:46
From LANIT to Kalina, or where Sobyanin's "counterfeit" is forged
See also