The political ambitions of the vice-governor of the Tula region Valery Sherin may crash about the criminal case of the change of the Central Stadium in Tula.

According to sources of The Moscow Post in the Tula region, the first vice-governor of the region, and part-time Prime Minister Valery Sherin may be considered as a possible replacement for the current head of the region, Alexei Dyumin.

Allegedly, Sherin himself does not hide his gubernatorial ambitions. Having worked for a long time in the executive system of the region in senior positions, he has enough experience and connections to lead the region. Especially against the background of constant rumors that Alexei Dyumin may take a high post in the country's power bloc.

However, Sherin's ambitions can measure the high-profile criminal case of the change of the Central Stadium in Tula. Ill-wishers disseminate information that Sherin is a defendant in this case. He is indeed a witness, and has already testified in court, but law enforcement officers have not made any complaints against him.

But everything can change, the investigation of the case continues. Recall that a criminal case was instituted against the ex-head of the committee of property and land relations of the Tula administration Tatyana Silaeva, a former subordinate of Sherin. She is accused of abuse of office.

Stadium across the throat

The change deal was completed at the end of 2014. Then part of the stadium territory, as well as an object on Zheleznodorozhny Street, passed into the ownership of the city. In exchange for this, a private person was given the territory of the depot on Oboronnaya Street. This private person is Igor Gusev, a businessman and investor known in the region. He was also summoned as a witness.

The prosecution believes that as a result of the transaction, the depot dropped out of the management of the Tulgorelektrotrans MCP, and the company had to rent space, namely the same depot. The amount of the lease resulted in the amount of damage - 61.3 million rubles. About this write "Tula News".

And here is Sherin, if the suspect is Tatyana Silaeva? As already stated, in that period (2014-2015), the official was its direct head, namely, the head of the Ministry of Property Relations in the government of Governor Vladimir Gruzdev. And the head of the committee was supposed to make an asset exchange deal with a private person with the approval of the minister, who at the same time was deputy chairman of the government.

Did Mr. Sherin know about this deal and its pitfalls, that it could damage the budget of the region? They say that when it smelled like problems for high ranks of the region, Valery Sherin allegedly could not appear in court. However, then, in May, he did appear.

From the transcript of his testimony, which "Tula News" also cites, it becomes clear that Sherin does not see his personal responsibility in the act incriminated by Silaev. He consistently stated that it was not he who set the task by change, and it was not him, but the governor who set the head of the then Tula administration Yevgeny Avilov.

By the way, in 2019, against the background of a criminal case already under investigation, Yevgeny Avilov refused the mandate of a deputy of the Tula City Duma, resigned and disappeared from the radar altogether. Perhaps now it is located outside of Russia. 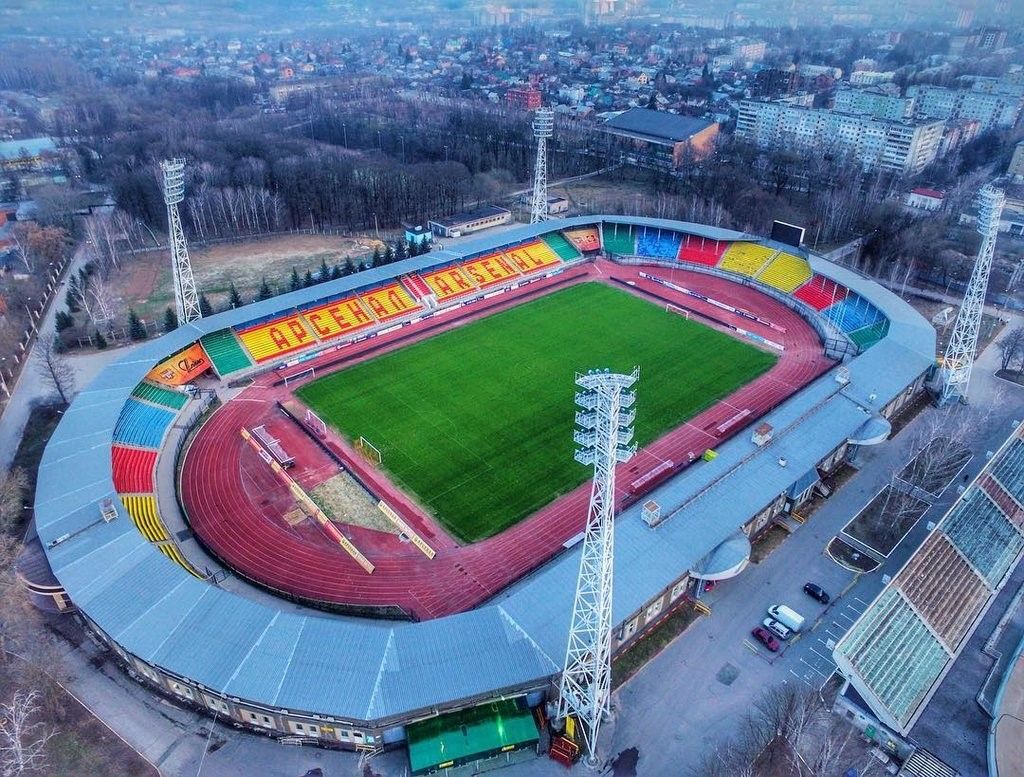 And Sherin continues to build his career, despite all the failures in the development of the region. It is not difficult to believe that he is on the "shortlist" of the Presidential Administration, as a possible replacement for Dyumin. But whether he can pass the anti-corruption filter is a big question.

Officially, Sherin himself, as an official, has and cannot have any business. But his wife, Sherina Olga Alexandrovna, is actively engaged in business. She was the founder of a very strange organization, which for some reason is not immediately available in several open sources.

We are talking about the Moscow "Tulur Smart Development." Moskovsky, because the company conducts its business in Moscow, and the capital's Bolshaya Spasskaya Street is indicated as the address for correspondence. But the legal address of the company is Tula Veresaev Street, on which Vice-Governor Sherin is believed to live. Why would an official's family register a company at their place of residence?

Interestingly, the company is engaged in consulting services in several areas, and information about it can be found, for example, in RBC. But for some reason this company did not appear in the information system of the Rusprofail service. But there were many other companies of Olga Sherina. 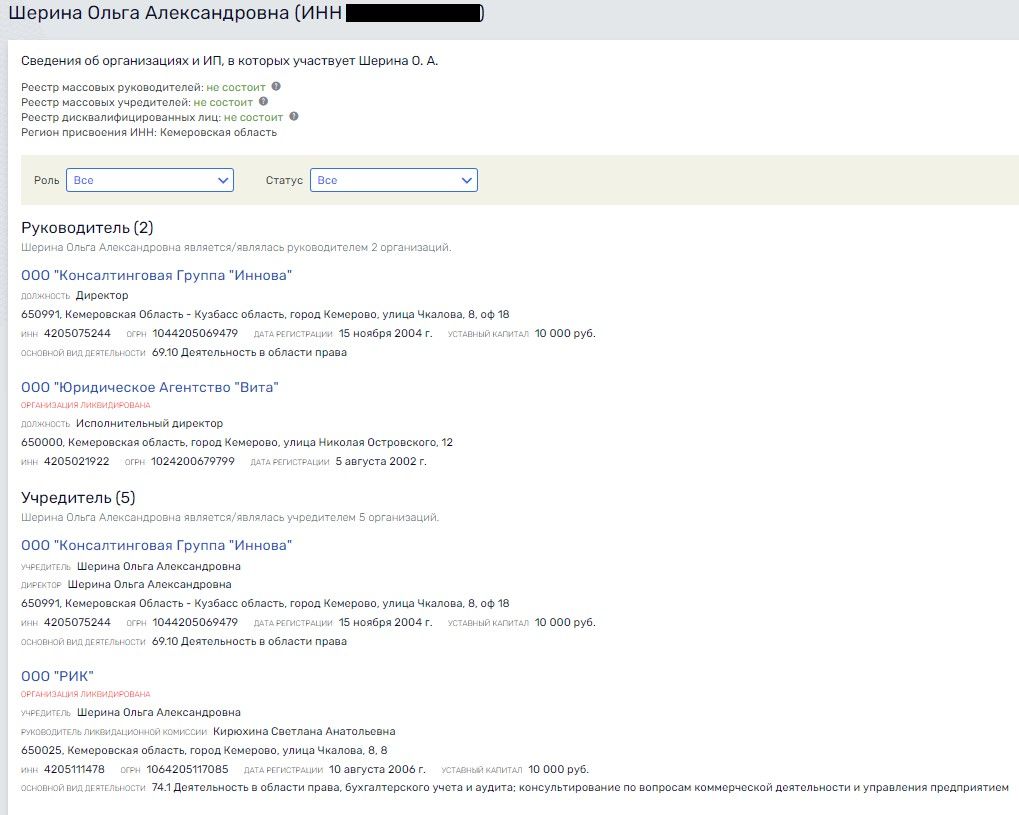 It acts as a leader in two and a founder in five structures at once, of which at least one, Innova Consulting Group LLC, is active. At the same time, we are talking about a large mother of five children, who officially sits at home and cares for offspring as a housewife.

With close consideration, almost every Sherina company can find signs of fictitiousness. Take Innova Consulting Group LLC, where Sherina owns 100%. In the structure with an authorized capital of only 10 thousand rubles, three employees work. At the end of 2020, the company received a loss of 308 thousand rubles, and at the same time did not receive a penny of revenue.

This situation is almost all the past years. Only once, in 2019, the company made a profit, while in others balancing on the verge of collapse. Observers wonder why in this case the structure is not liquidated, can not dubious financial transactions go through it?

Another company that attracts attention is Regional Investment Company LLC, liquidated in 2015. It seems that it did not ask for investments - the last reporting year of 2014, the company ended with a pathetic profit of 37 thousand rubles and with a complete lack of revenue.

All these issues are only an addition to the existing claims and problems to the work of the regional government headed by Sherin. They say that against the background of this, relations have deteriorated between him and Governor Alexei Dyumin.

Another scandal is ripening in the regional center, where in the first quarter of 2021 all the money allocated for cleaning the city has already been spent, which is 1.5 billion rubles. Where the money went is not completely clear.

It is significant that the city authorities spent the bulk of these funds on paying for the services of Special Auto Industry JSC, controlled by Igor Gusev, already mentioned. It seems that under Sherin this exists in maximum favor from the authorities.

It is Sherina who is called a possible patron of Gusev in the government. Interestingly, in March 2021, the city authorities sold a 49% stake in Special Auto Economy JSC for only 175 million rubles. And the only bidder was Guseva Oksana Nikolaevna (wife of Igor Gusev). The application for participation in the auction was also submitted by Igor Gusev's closest partner, Sergey Kitanin.

According to the authors of the "Russian Crime" website, Oksana Guseva allegedly currently controls 74% of the shares of the once municipal enterprise, and Irina Zlobina (Sergey Kitanin's common-law wife) controls the remaining 26%. At the same time, the real market value of property and land plots of Special Auto Economy JSC in use can be about 2 billion rubles.

Recall that it was Irina Zlobina, at that time the deputy director of the Tulgorelektrotrans MCP for legal issues, who was the main beneficiary of the stadium's change deal at the depot. And she could receive more than 60 million rubles as payments for leasing the depot from MCP Tulgorelektrotrans. 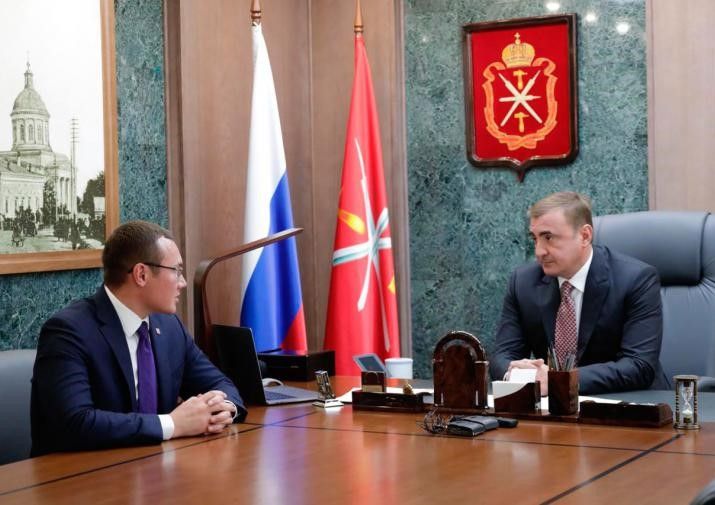 A black cat ran between Valery Sherin and Alexei Dumin?

Summarizing, if Sherin really has gubernatorial ambitions, then his ill-wishers should have enough opportunities to prevent them from being realized. The investigation into the change of stadium continues, and the main person involved in it may change, while scandals and reproaches for possible lobbying of quite specific commercial structures are pursued on Sherin's land.

In this situation, Governor Alexei Dyumin will not be difficult to defend his position. At a minimum, offer a less scandalous replacement in case of leaving the region for promotion.