A former official of the Moscow city hall may be involved in fraud with medical equipment worth billions of rubles. Is this what he learned while working under Sergei Sobyanin?

As it became known to the correspondent of The Moscow Post, a major scandal broke out with one of the former officials from the Moscow Mayor Sergei Sobyanin's team and his "social" Deputy Anastasia Rakova. In Novosibirsk, the FAS discovered a cartel agreement for 3.3 billion rubles, the head of one of the participating companies was former head of the Moscow GAU Gormedtekhnika Nikolay Sorokin.

This is about the Radiation Technology company, which Nikolay Sorokin headed in 2019-2020. Before that, in 2018, he also headed the centre for laboratory research of the capital's Department of Health. Another company that the FAS believes is involved in a cartel was Sibmer, the beneficiary of which is Tatyana Borisova - a woman who also does not seem to be a stranger in the Moscow city hall.

According to PASMI, the total amount of contracts that cartel members have a hand in, may reach 3.2 billion rubles. It concerns more than 560 tenders. There is a reasonable question - for such a scale, the participants of the alleged cartel need a lot of experience. Where could they get it if not on the procurement and maintenance of medical equipment in billions of rubles from the budget for Gormedtekhnika?

The above-mentioned Tatiana Borisova was previously co-owner of Sibmer. Now she owns 100% of Radiation Technology. She also headed the structure after former Sobyanin's team official Nikolay Sorokin left the post of CEO.

"Chick" of Sobyanin's "nest" Sorokin headed GAU Gormedtekhnika since it was converted from the state unitary enterprise until 2017. Then he worked for a short time in the capital's laboratory research Centre of the Ministry of Health. After his departure, Radiation Technology, the company headed by him, suddenly began to receive multimillion-dollar contracts.

In just a few years, their amount exceeded 440 million rubles. Now we get to know that they could have been obtained dishonestly. The sum of Sibmer's contracts exceeds 2 billion rubles. Mostly - supplies of medical equipment to hospitals in Novosibirsk. 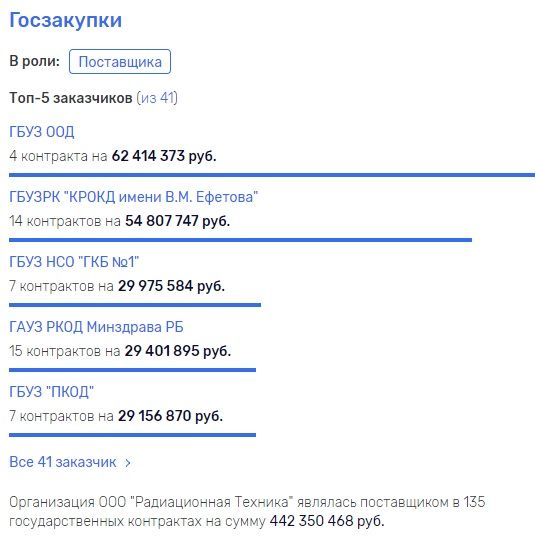 At the same time, according to the Antimonopoly authority, more than 400 auctions totaling more than 3 billion rubles were shared by Sibmer and Radiation Technology with three other companies when delivering medical equipment in Moscow. 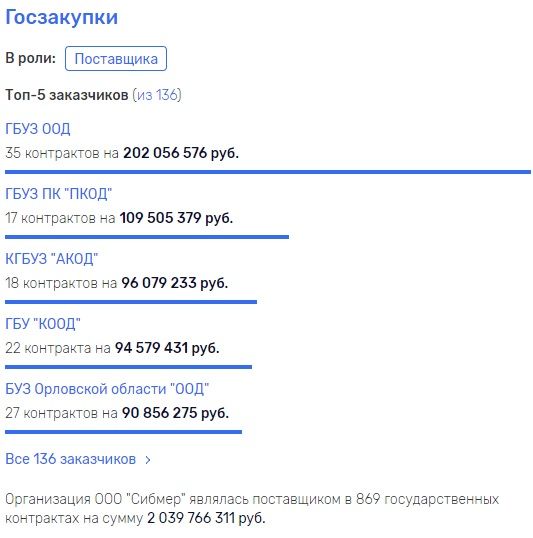 As a result of the FAS investigation, a case was initiated under clause 2. part 1 of article 11 of the law on protection of competition. In addition, according to Interfax, criminal cases have been initiated against company officials on the grounds of a crime under part 5 of article 291 of the Criminal Code of the Russian Federation (giving bribes during auctions).

According to rumors, at some point after the departure from Moscow and the management of Radiation Technology, Nikolay Sorokin realized that "the scheme is established", and turned his attention to another business. It became the Atomservis company dealing with the repair of electrical equipment. For example, the same medical equipment that was delivered to health care institutions.

Today Sorokin heads Atomservis as General Director. And, don't be surprised, the company has been extremely successful in the field of public procurement. It already has almost 200 state contracts worth more than 247 million rubles. Among the suppliers, there are many structures directly linked to the Russian Ministry of Health. For example, Russian scientific centre of roentgenology and radiology(RNTSRR). 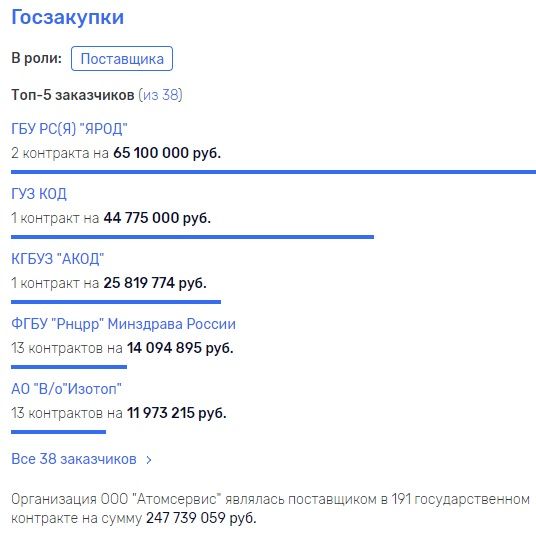 Nature abhors a vacuum. After the departure of Nikolay Sorokin from GAU Gormedtekhnika (according to rumors, he became burdened with the duties of an official, and he decided to fully use the skills acquired in the Moscow city hall for his own business), his place was taken by Irina Rybalchenko.

According to our sources, in addition to her own, she can represent the interests of a member of the Economic Council under the President of the Russian Federation Alexey Repik. Rybalchenko's right-hand man, his social Deputy Anastasia Rakova, had to approve the appointment. However, it is not Rybalchenko, who is a much more interesting character, but her husband Sergey Grabovsky is.

According to a former employee of the security Department of Gormedtekhnika, Rustam Abdusalamov, these companies actively participated in state tenders, where they created the appearance of competition, distributing the roles of winners among themselves in advance. His words are quoted by PASMI.

According to rumors, it was Repik who turned to Sobyanin's Deputy Rakova with a request to consider his man for the candidacy of the head of Gormedtekhnika after the departure of one scandalous official Igor Kadashev from the post of head of the institution. The latter was associated with Rakova's predecessor, former Vice-Mayor Leonid Pechatnikov.

If the decision was made in this way, it is difficult to believe that Anastasia Rakova did not take into account her own commercial interest when appointing Rybalchenko.

In addition, according to PASMI, Rybalchenko was supposed to become a key assistant to Rakova on the organization of new life cycle contracts, where there already are hundreds of billions of rubles. Moreover, according to Rustam Abdusalamov, the money works in the interests of strictly certain persons in the capital's city hall.

A large purchase of medical equipment in 2019-2020 had to be the first attempt at writing. And so, as follows from the message on the Vademecum medical portal, in May, Gormedtekhnika became the winner of auctions for four contracts for a total of 16.5 billion rubles for the service of medical equipment in medical institutions of the Moscow Department of Health from 2020 to 2022. A decrease in the contract price during auctions was 0.5-1%.

Amazing "savings" for the budget. In this case, it is unclear why such auctions are needed at all, unless it is to fill the pockets of officials with budget money. In addition, other participants tried to appeal the terms of the tender, but the FAS considered these claims unfounded. Another company that filed a complaint suddenly withdrew it before it was considered. According to rumors, the mayor's office promised them that next time they would share a piece of pie, so "there is nothing to make noise about".

Another pool of contracts that deserves attention is 13 competitions for the supply of 101 MRI machines, 116 CT scanners, 28 angiographs, 19 mammographs and 309 ultrasound machines. The total amount of contracts at the end of 2019 was 20.8 billion rubles.

Is it surprising that among the four winners, three of whom should represent the capital of foreign manufacturers of medical equipment, was the R-Pharm GC of Alexey Repik? It got contracts for a total of 3.4 billion rubles. 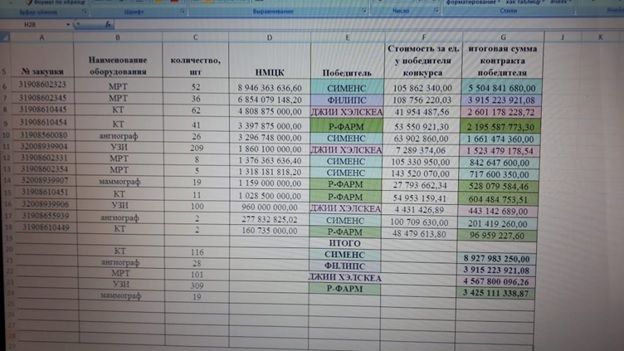 According to Rustam Abdusalamov, prior to the tender procedures, Irina Rybalchenko and Elena Balashova, an employee of the Moscow Department of Health, allegedly met with representatives of the GE Healthcare company, where they could impose their own pricing policy. Supposedly, go out to the competition with previously specified in Gormedteknika price.

"You see, the price is a penny higher during the auction — this is the same refusal... we have a very tough position. It's not ours. It's not mine. Not Elena Alexandrovna's (Balashova). The position was announced by the government of Moscow," said a woman with a voice similar to Rybalchenko's in an audio recording quoted by colleagues from PASMI.

That means the government of Moscow. Or could it be personally announced by Moscow Mayor Sergei Sobyanin and brought to the attention of lower-ranking officials through Anastasia Rakova?

And all this is happening against the background of a lot of complaints about the work of the capital's health care. Not to mention the pandemic - even before it, Moscow's hospitals were, to put it mildly, not very clean and bright.

Muscovites have not forgotten other scandals under Rakova. For example, the case of doctors led by the head of the health Department Alexey Khripun - no less, and even more odious official than Rakova herself.

At that time, many doctors were hiding behind official work at the hospital, but in fact successfully promoted their own business. Among them, for example, was named Lyusina Polonskaya, who worked on three rates in hospitals at once, and at the same time allegedly kept the firm called Doctor VSEGDA.

And in general, the case of Nikolai Sorokin does not look unique in the context of the affairs of the Moscow city hall. Here another scandalous case can be recalled when the former driver of the ex-Minister of Health of Moscow Selkovsky organized his own business after leaving office.

According to the Vek publication, very soon he managed to get 30 state orders from the Moscow Department of Health in the amount of more than 123 million rubles for his structure "Mosmedkomplekt". This was, however, even before Rakova. But in 2017, the firm was liquidated. Apparently, "the moor has done his duty, the moor can leave"?

Such stories are just numerous. And it seems that the purchase of medical equipment is just a drop in the ocean. Against the background of possible collusion of ex-official of the mayor's office Nikolay Sorokin, they do not look like separate egregious cases at all. More likely, it is a well-organized system that can cost us not so much billions of budget rubles as the lives and health of citizens.

Do Sergei Sobyanin, Anastasia Rakova, Alexey Khripun and everyone who might help them in possible fraud understand this?