Does Senator Zubarev have the right to directly do business, and where do the taxes of his structures go from the sale of fish in Murmansk?

According to the correspondent of The Moscow Post, Senator of the Federation Council from this region Igor Zubarev is going to breed trout. To do this, he established Trout Karelia LLC, for which he will build a fish growing complex in Kondopoga TOSER, with an area of ​ ​ 20 thousand square meters. meters and an investment of 4-5 billion rubles.

The news raises questions, because direct ownership and management of business for representatives of both houses of the Russian parliament is in conflict with Russian law. Nevertheless, Mr. Zubarev's shares in Trout Karelia LLC are not in trust. Moreover, the senator is simultaneously the leader in three, and the founder, attention, in the 91st organization.

In none of the existing structures of Zubarev, the senator's shares are not in trust. Given the burden that the senator should receive in connection with the management of such a business empire, it is not clear how much time he has left for his actual representative and legislative activities.

The fish business is one of the foundations of this very business empire of Zubarev. The senator is a native of Petrozavodsk. Already in the middle of the tenths, he was one of the most famous fishermen in Russia, behind him are officially listed fishing enterprises LLC Consent, Yantar, RK Virma. Their shares are also not in the trust of Mr. Zubarev.

At the end of last year, a major scandal erupted, which they tried to connect with the name of the senator. In December, a tragedy occurred in the Barents Sea near the Novaya Zemlya archipelago - the Onega fishing vessel sank. Of the 19 crew members, only two managed to escape, the bodies of 17 sailors could not be found. The cause of the crash was called a strong wave blow and icing of the longline.

Whether the people of the senator could exercise actual control over the ship, albeit assigned to another office, is unknown. But before that, it was the senator's company that was supposed to acquire and operate it. The Onega was 41 years old, and the life of a fishing vessel was 18 years. Seafarers could become hostages of the possible irresponsibility of their previous or current leadership. Is it necessary to say that there were no complaints against Zubarev or his structures following the results of the incident?

The shares of this company, like a number of other companies of the senator, are not in trust. This also applies to another fishing office, Consent LLC, which owns 2% of the structure. At the same time, Virma's shares are under encumbrance - pledged to Sberbank. This suggests that Mr. Zubarev can conduct his activities with borrowed money from a state bank.

Why it was impossible to repair and equip Onega with the same funds earlier is not clear. The sources of financing for a new undertaking - the construction of a trout growing complex - are not clear either. Will her Zubarev also build on borrowed funds?

Meanwhile, according to the authors of the Blogger 51 website, Mr. Zubarev's allegedly companies may underpay taxes on fish shipped to the budget in Murmansk. Even a whole scheme is given that they are trying to attribute to the people of the senator. Allegedly, it is impossible to buy fish from Zubarevsky fishermen directly after catch. Transactions pass through other offices, including Onega Marina LLC, Trading Company, Guard, Petrofish, Fish Company, Rybtorg, Arctic Line, Regional Fish Alliance, Golden Fleece, SkyNord and others.

Citing data from a certain tax audit, the authors of the Blogger 51 website claim that allegedly money under fictitious loan agreements from the same Rybtorg and other companies could be withdrawn to the accounts of other organizations whose founder is called Senator Zubarev. More specifically, Northwestern Financial House LLC, Panorama Management Company, Nevsky Real Estate Construction Company.

The essence is simple - the catch could be sold through the "pads" companies, which bill customers, taking into account VAT. At the same time, they themselves do not pay these amounts to the budget. True, or not - it is difficult to understand, but specifically to Zubarev there are no complaints. Is this not the secret to success, when half of the business is pledged, but there is money for new projects?

The current deputy of the State Duma from United Russia Nikolai Makarov, who previously had a construction business, could allegedly take part in such activities. Allegedly, cashless funds could flow to the accounts of his companies through intermediary firms, as if withdrawn from the fish business. 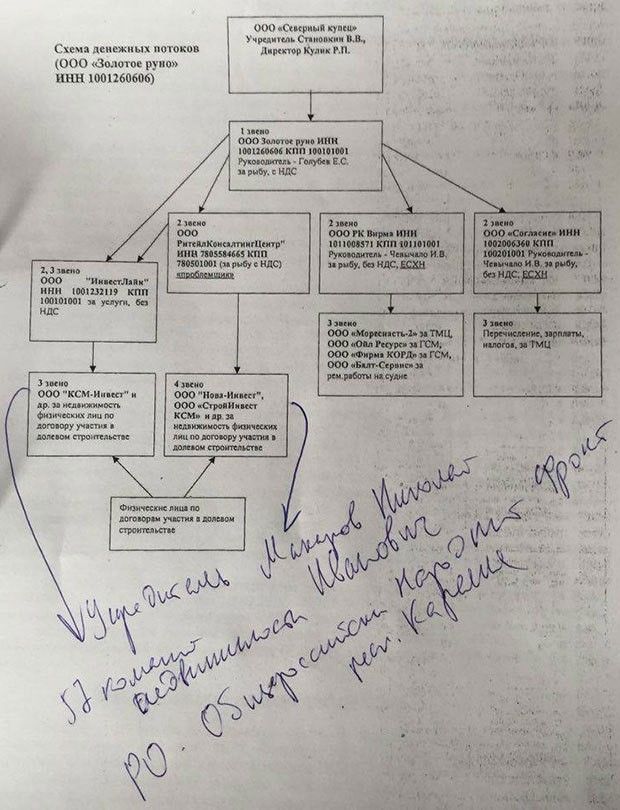 In this context, it would be beneficial for any unclean entrepreneurs to register one-by-one such gasket companies in order to drive through them, as through intermediaries, money from the sale of fish. After that, such one-day days can be easily eliminated. Note that the absolute majority of Zubarev's already liquidated companies suggest precisely these thoughts.

Otherwise, why would he need dozens of small, already liquidated fish structures, which have almost one zero in the indicators?

The companies of Zubarev that have drowned in the Summer

In this regard, the question arises - is information about the financial condition of Zubarev's existing companies true? Many of them have not climbed out of losses for years. For example, Barents Group LLC) processing and preservation of fish, crustaceans and mollusks) last showed profit in 2014. At the end of 2020, its loss amounted to 80 million rubles. At the same time, the share of the structure is also pledged.

Another structure, Northwestern Financial House LLC, created back in 2002, also looks opaque. Having neither revenue nor the value of assets, the company received a loss of 211 thousand rubles. Similar questions may arise for other structures, some of them, overtly, have signs of fictiousness.

How, then, did Mr. Zubarev manage to take 34th place in the list of the richest civil servants for 2020, compiled by Forbes?

However, not all Zubarev's companies are unprofitable. Take at least the already mentioned Consent LLC, which brought the senator 184 million rubles in profit. This is more than 600 million rubles less than a year earlier. Sergey Zhgulev, already known to us, also leads the structure.

This company is interesting in that it could light up during a major corporate conflict between the key beneficiary of the fishing giant Norebo Vitaly Orlov and his former partner Alexander Tugushev. For many years, they have not been able to share assets, which gives their competitors, such as Zubarev, the opportunity to "bite off" the share of the fish market.

To be precise, not Consent LLC, but its successor Consent-2 LLC, which was transformed into CJSC and entered Karat-1 JSC. The latter is part of the Norebo fish holding Vitaly Orlova. According to the ill-wishers of Orlov and Zubarev, these two businessmen could literally crush most of the quotas for catching shrimp.

"Karat-1," being part of the holding, should also be the subject of the interests of a previously partner, and now Orlov's opponent, Alexander Tugushev. A tragic story is connected with Karat: in 2018, the founder of Akros, Valery Vorobyov, was found dead. Earlier, the controlling stake in Akros belonged to Karat-1, RBC wrote about this. According to Akros shareholders, the deal with Orlov's company could have signs of fraudulent.

You can assume anything. To the extent that Vorobyov could try to challenge the deal with extremely adverse consequences for himself personally. The question of whether Senator Zubarev could take part in these peripheries and corporate wars remains open.

In the context of the above, there are questions for the new business of Zubarev, Trout Karelia LLC. Its general director Zubarev appointed a notable person, Vitaly Markov. He is the head of three more companies. And he is the founder of the Crimean Greenland LLC, which is engaged in the rental and management of its own or leased non-residential real estate.

Surprisingly, only one employee works in a company with almost 3.5 million rubles of authorized capital. Apparently Markov himself. In 2020, the structure has neither revenue nor profit, but a loss of 387 thousand rubles. Does Senator Zubarev not want to drive through this company the proceeds from the sale of trout? In this case, it would be convenient, because formally he has nothing to do with it.

From where Zubarev climbed to the peaks of the fish business is also known. For a long time he headed the Union of Fishermen of Karelia. It was in that position that he survived the assassination attempt in 2004. Fortunately, the senator was not injured, but the incident gave rise to rumors of criminal showdowns in the fish business of the Republic. And clearly did not add reputation points to an entrepreneurial politician.

Given this, experts have no doubt that in Zubarev's current undertaking in Karelia there are many pitfalls and hidden currents, the flows of which can be filled with money with possibly unpaid VAT from the sale of fish. But, judging by the direct management of Senator Zubarev with his business, such assumptions do not bother him at all.