School "divorce" from Shuvalov and Sopronenko

Getting involved in a "concession" with the Enlightenment Group of Companies Igor Shuvalov and Otto Sopronenko, subcontractors are left without money, and cities without new schools.

Mid-September is in the yard, but thousands of schoolchildren in Nizhny Novgorod, who were supposed to go to the new buildings of School 800, being rebuilt under a concession with the Prosveshchenie Group of Companies and its structures, are again forced to huddle in old buildings.

The buildings were supposed to be commissioned by September 1, 2021. It was assumed that this would be a gift to the townspeople and their children for the 800th anniversary of Nizhny Novgorod. Otto Sopronenko, the organizer of the concession project, failed this task.

To make matters worse, dozens of subcontractors were without money, who were brought to the construction site, but forgot to pay for their work. And when trying to go to court, they receive counterclaims from companies affiliated with Sopronenko - and while the judges are digging into the documents, skillful concessionaires "go" to other regions where they offer their services and receive considerable funding.

All this looks like a real financial pyramid, at the base of which are children left without new school buildings.

What is happening with the largest PPP project for the construction of schools in Nizhny Novgorod, the correspondent of The Moscow Post in the Nizhny Novgorod region understood.

Earlier, our publication already told the story of the "success" of the Enlightenment Group of Companies, the largest Russian publishing house of educational literature. A year ago, VEB.RF (25%) entered its capital, led by Igor Shuvalov, RDIF (25%) under the leadership of Kirill Dmitriev (see our investigation into offshore companies associated with it) and Sberbank of Russia (25%).

Igor Shuvalov became the chairman of the board of directors of Enlightenment. And very soon, under the patronage of the Civil Code, a whole series of companies were created, more similar to the "clones" - "The first concession company" Enlightenment, "" Second, "and so on - almost three dozen. Two things connect them - the attitude to "Enlightenment" and the personality of Otto Sopronenko, who is the founder of a number of these structures.

Mr. Sopronenko is a longtime associate of Igor Shuvalov. Until 2018, he worked as deputy general director for the sale of assets of Vnesheconombank Investment Company LLC - VEB Capital (100% owned by VEB).

After the VEB.RF state corporation was created in 2018, Sopronenko came in handy for Shuvalov in new areas of work. He began to travel to the regions and offer local authorities a concession agreement on the construction of schools. On paper, everything seemed just fine.

The largest and most significant was to be the School 800 project, dedicated to the 800th anniversary of Nizhny Novgorod. For 6.5 billion rubles, it was supposed to build four buildings in different areas of the city, including in the urban district of Bor.

Lawyers representing contractors for the construction of these facilities have contacted our editorial office. The fact that none of the buildings as of September 14, 2022 was ready is well known. 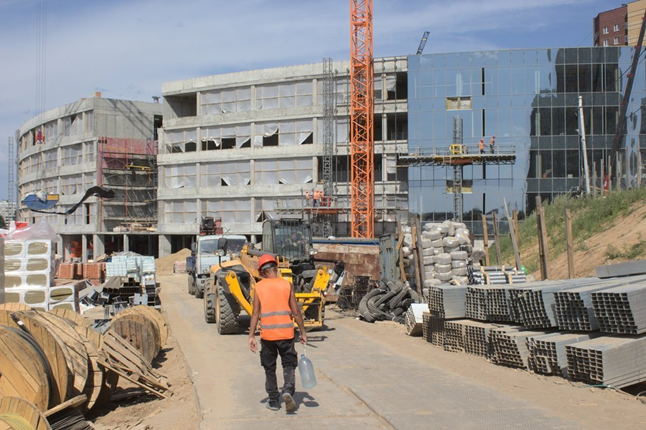 "Nedostroy" of one of the buildings of the "School 800." Photo: Anastasia Malysheva

But it turned out that subcontractors were trite "thrown" for money. Now in the Arbitration Court there are already about 50 cases related to the failure of the School-800. It is not clear whether these objects will be commissioned at all.

The general contractor is the Nizhny Novgorod Construction Directorate. The latter is a government structure. She exercised control, she could be contacted for clarification of information. As it turned out later, some of its officials could be affiliated with Mr. Sopronenko.

The construction site itself was inaugurated by the Governor of the Nizhny Novgorod Region Gleb Nikitin. According to our source, Nikitin has long and well known Otto Sopronenko. In the early tenths, they worked together in the Federal Property Management Agency. Perhaps this explains the fact that Sopronenko and his structures in Nizhny Novgorod have become almost untouchable?

In the fall of 2021, when it became clear that Nizhny Novgorod schoolchildren would not see new buildings, the city was shocked by a series of corruption scandals related to the Directorate. In January 2022, law enforcement officers finally came to the school and seized documents. According to rumors, they suspected misuse of funds. As a result of the audit, a fraud case was opened, Delovoy Kvartal wrote about this.

But long before that, in February 2021, Andrei Nechaev, the head of the general contractor, the Construction Directorate, was arrested, and in August the chief power engineer, who is suspected of receiving a bribe from a subcontractor for concluding a contract, was already under investigation. In exchange, according to investigators, he promised 600 thousand rubles and Mercedes-Benz E200 worth 6.5 million rubles in addition.

And it is she who now acts as a counterparty to dozens of lawsuits on non-payment of funds for the work done in the buildings.

"Capital of the Volga Region" is a structure completely tied to the Enlightenment Group of Companies and Otto Sopronenko. 30% is owned by his own company SB Capital, another 70% is owned by Infrastructure Childhood LLC. The latter is 91% owned by the same SB Capital LLC, and another 8.1% by First Concession Company Prosveshchenie LLC, where Sopronenko personally has 80% of the shares. All of them, by the way, are under the burden of Sberbank, i.e. Otto Igorevich walks, not at his own, but at the state.

But this is only part of the story, because Sopronenko and his people were supposed to be affiliated with the Directorate for Construction - Government. How come? The connection is very easy to trace. One of the founders of LLC SK "Capital of the Volga Region," a commercial structure, by the way, was Andrei Vladimirovich Nechaev. Yes, the same director to whom the security forces eventually came.

It is surprising why the security forces were not interested in the possible affiliation of the structure?

In any case, after the Capital of the Volga Region company merged the functions of a technical customer and a general contractor in September 2021, a lot of time passed, and the facilities were never completed.

Now the company is a defendant in 42 cases in the amount of 285 million rubles. At the same time, she also acts as a plaintiff in nine cases worth 280 million rubles. According to the lawyer of one of the structures that are suing Sopronenko's company, Evgenia Dmitrishina, the "Capital of the Volga Region" acts in an interesting way.

After a statement of claim is filed against her, she files a counterclaim, thereby delaying the process. At this time, subcontractors are sitting without money, and schoolchildren are without new buildings.

This is clearly seen in the example of the lawsuit of IP Kulakov S.N., who tried to get paid for his work on the construction of school buildings - more than 60 million rubles. And immediately he was filed a counterclaim from the company "Capital of the Volga Region." The situation is similar for many other claims against the UK. You can get acquainted with the progress of the proceedings here.

In addition, Dmitrishina claims that Stolitsa allegedly does not return to subcontractors the documents signed by her (acts of the KS-2 form, as-built documentation). "There are those who wore sets of documents 7 times, and they disappeared like in a black hole. And then the capital says that the work has not been completed, they have not received documents, "the lawyer said.

But here the situation is slightly different: the "Capital of the Volga Region" itself filed a lawsuit against the subcontractor, which demanded the return of the advance. She also received a counterclaim - the contractor claims that he simply did not receive payment for his work. There are still a lot of such lawsuits.

Where the money that was received by the structures from bank loans for the construction of schools, and which should have gone to subcontractors, is not clear.

Is the Pyramid growing stronger?

And at the same time, the "concessionaires" under the leadership of Sopronenko are actively entering other regions, trying to break through the agreement on the construction of schools there. That is, having unrealized projects and legal claims worth hundreds of million rubles, they are trying to go into the same stories in other subjects.

Does this not resemble the principle of the financial pyramid? As a result, who will be in the big minus - the "foundation" in the form of a slimmed-down budget and cities that will not receive new schools.

Earlier, The Moscow Post told how the mayor of Voronezh Vadim Kstenin refused such a "profitable" offer. It turned out that in the new economic conditions, the budget simply will not pull the "wishlist" of Sopronenko and Co.

They did not succeed in "entering" Novosibirsk. Local residents and deputies, fed up with concessions with the same VIS, quickly determined that it would be much cheaper and faster to build schools on their own. Despite the fact that concession contracts have already been concluded, they refused to implement it.

Against the background of these stories, Sopronenko and Co are actively "entering" Mari El, where they have already managed to disrupt the construction of two schools at once: in the village of Bolshoi Pamyaly, Kilemarsky district, for 80 places, and the Blue Bird school for 825 places in the Yubileiny microdistrict in Yoshkar-Ola. Writes about this MariMedia.ru.

Moreover, there are already legal proceedings related to this situation. Here is an administrative case on the claim of the Ministry of Construction, Architecture and Housing and Communal Services of the Republic of Mari El to the same LLC SK "Capital of the Volga Region." The background of the case was not disclosed, but according to our source, allegedly the company could not comply with the instructions of the construction control body.

The authorities of Mari El are sounding the alarm. Just yesterday, the head of Mari El, Yuri Zaitsev, instructed to take measures against the concessionaires, who disrupted the construction of the facilities. Writes about this "Mari Pravda."

Earlier, Zaitsev showed incredible surprise that there is silence at construction sites, workers walk in clean clothes. It seemed that construction was not underway at all! 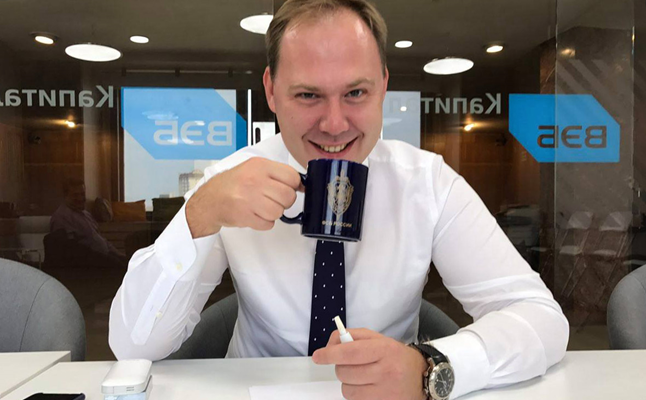 Perhaps it is even better for Mari El if someone else builds these schools. After all, earlier questions arose more than once about the safety and quality of work of concessionaires. According to the publication Hypermarket of Real Estate of Nizhny Novgorod and the Region, State Duma deputy Dmitry Kuznetsov expressed concerns that the roof of one of the buildings of School 800 in Nizhny Novgorod could simply fall on children. Our sources also spoke about problems with the quality of construction and safety at the facilities.

How in general can such a structure work in Russia, which receives money, and does not build schools. And at the same time it goes to other regions, and is it trying to crush subcontractors who find themselves without payment for their services?

Something suggests that Igor Shuvalov helps Mr. Sopronenko to get out of the water dry, through the Enlightenment Group of Companies and VEB.RF provides a dense umbrella that covers Otto Igorevich from any problems. But schools no longer become from this - let those local authorities who entered the concession with them, and explain this to their voters.