President of the Union of the medical community National Medical Chamber, Dr. Leonid Roshal, thanked  St. Petersburg entrepreneur Yevgeny Prigozhin for his concern and desire to help in the court case against Alexey Navalny. 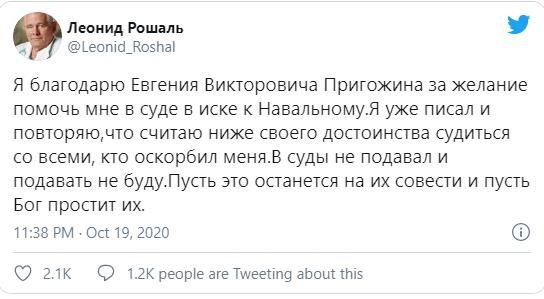 Earlier, Roshal defended Omsk doctors who saved the life of the opposition leader, and also suggested creating a joint group of German and Russian doctors to treat the man.

Most of all, the opposition leader's associates and his wife Yulia were "angered" by Roshal's request to German doctors to transfer the results of Navalny's examination to Russia, on the basis of which they diagnosed "Novichok poisoning".

Yulia Navalnaya and Vladimir Milov in response to the offer insulted the Russian doctor. This behavior outraged Yevgeny Prigozhin, and he offered to help Roshal and his colleagues protect their honor, dignity, and business reputation.

Let us recall that Roshal is famous not only in Russia, but also abroad. In the spring of this year, Vladimir Putin awarded the doctor the title of Hero of Labour. Roshal was saving children during wars and terrorist attacks. Thus, in October 2002, he negotiated with the terrorists who seized the Dubrovka Theatre Centre. Thanks to him, eight children were saved, and the hostages received water and medicine.

As for Navalny and his hospitalization in a Berlin clinic, there are a lot of undisclosed details in this case. His wife had previously insisted that he be treated in Germany. After the transportation, experts began to claim that Navalny was allegedly poisoned with a combat poison from the Novichok group. Germany has not yet provided Russia with evidence to support this rhetoric.