"Roman from Moscow" "taking measures" in the Russian MIA?

A possible Vladimir Kolokoltsev’s successor as Interior Minister Roman Plugin may be involved in many scandals, and crime under his leadership of the St. Petersburg police is only growing.

Sources close to the Presidential Administration inform The Moscow Post that Russian Interior Minister Vladimir Kolokoltsev may soon resign. Allegedly, he was supposed to leave the post in the spring of 2020, but the coronavirus pandemic pushed these plans to a later date.

Head of the Ministry of Internal Affairs in St. Petersburg and the Leningrad region Roman Plugin is said to be his most likely successor. Plugin must be close to Kolokoltsev, he previously worked as a chief of DIA in the southern district of Main Directorate of MIA of Russia in Moscow, and was even considered the right hand of the Minister.

If the Presidential Administration wants to improve the image of the police and establish order there, then replacing Kolokoltsev with Plugin is seen as getting this for that. We all remember the scandals associated with the current Minister, rumours that he lobbies for his family's business, awful cases of police brutality and more. But there may also be a heap of scandals and dubious cases behind Plugin.

Roman Plugin was appointed head of the Ministry of Internal Affairs for St. Petersburg and the Leningrad region in February 2019. The local employees, according to rumours, quickly nicknamed him in the manner of the Comedy Club "Roman from Moscow", with the subtext, they said, this was allegedly an appointee and a temporary employee.

Meanwhile, it is rumoured that Plugin is very disliked even by his own people in the Northern capital. Allegedly, as soon as he came, he immediately began to "push away" from the service possible competitors among colleagues in the management.

By the summer, the authoritative and respected generals of the St. Petersburg Central Board sich as Rogovoy, Vlasov, Abakumov and then the head of the Department of Economic Security and Anti-Corruption (UBEP) Alexey Brilliantov had disappeared. The latter was considered the main threat of corrupt officials and proved himself well in this post. RBC wrote about his dismissal.

Immediately, there were rumours that such principled people were not needed in Plugin’s team. Moreover, they almost started talking about the "raider seizure" of the St. Petersburg Ministry of Internal Affairs by Kolokoltsev’s "comrade" from Moscow: allegedly, he not only dismissed everyone, but also reserved dozens of office apartments for the bosses he was going to bring from Moscow, as if in order to form and provide a system of personal power.

But this was only the beginning for the police of St. Petersburg.

Soon Roman Plugin established the fact that many of them called "legalized slavery." This is about a document dated August 2019, which could force employees to report on their movements during off-hours. And this is in St. Petersburg, in the 21st century! Scans of the relevant document were provided by the authors of the Ombudsmen politsii telegram channel. 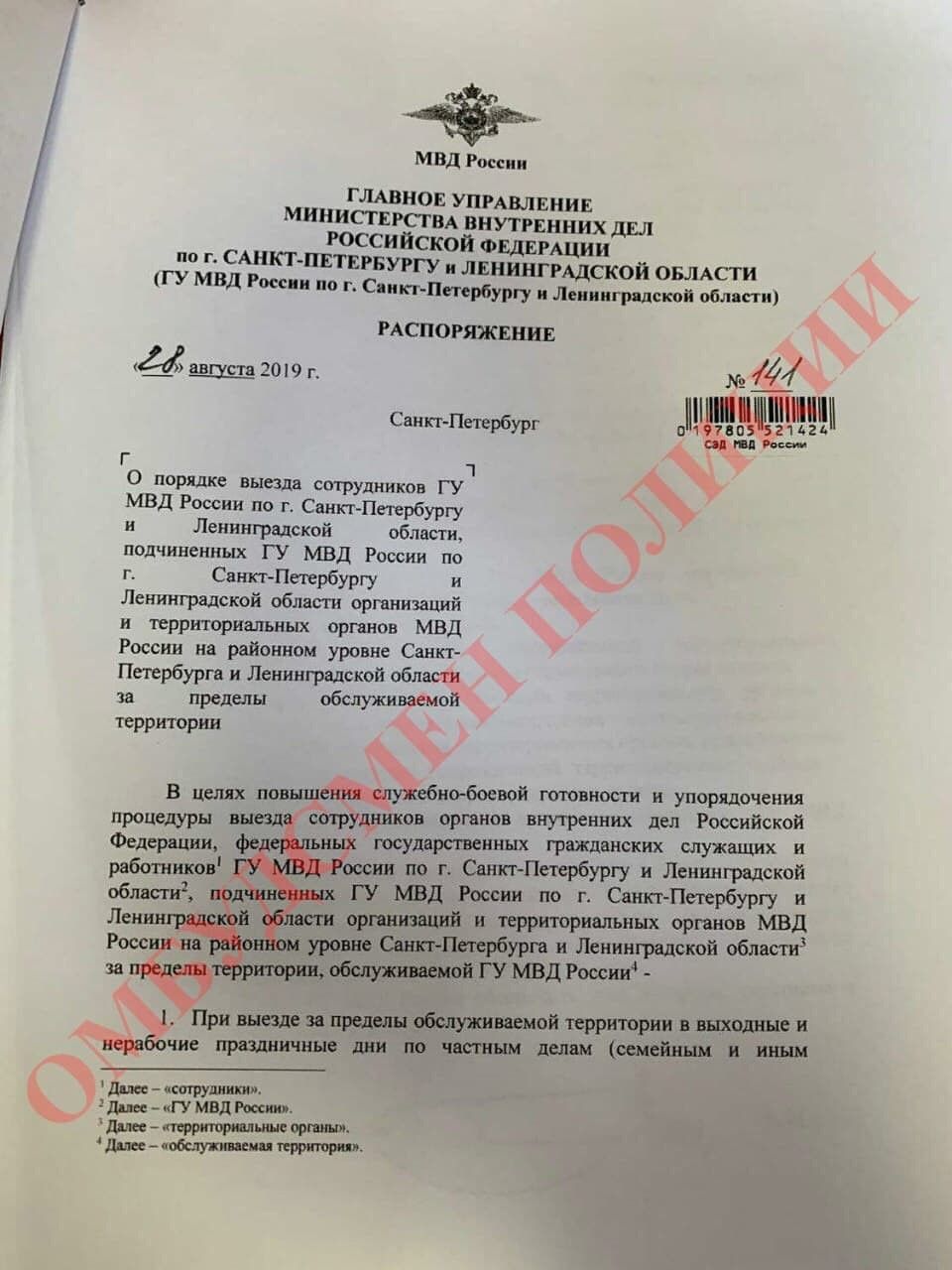 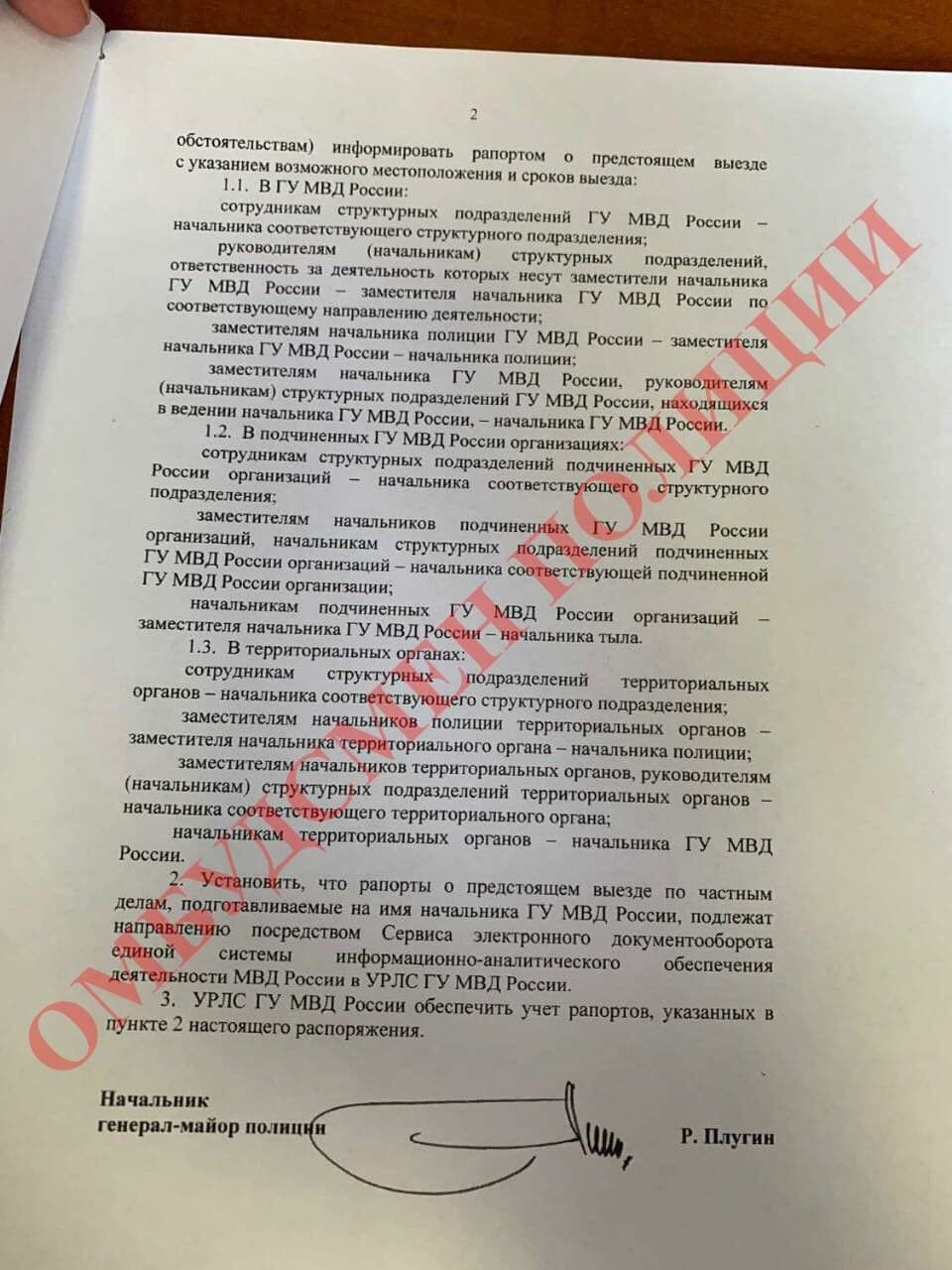 The sample of the document concerning movements of police employees during days-off. Dated 28 August 2019

Is it necessary to say that the legality of such actions, to put it mildly, is questionable, and may go against even the Constitution of the Russian Federation? Does Roman Plugin, apparently, believe that he himself is the Law? Later, other documents were leaked to the network, where Plugin does not hesitate in expressions, requiring a number of detentions. This was reported by the 47news portal.

Apple from  the tree

But all this, most likely, is just a screen and the enjoyment of power. After all, according to the blogger "K0M2375" on the Live Journal platform, Roman Plugin allegedly can be involved in dubious affairs. And can do it in the second generation. After all, presumably his father, Yuri Plugin, also served - then in the militia of the Murmansk region, and left a very bad reputation for himself.

As Kommersant writes, back in 2001, the Head of the Murmansk region's Main Directorate of Internal Affairs, Major General Yuri Plugin, submitted his resignation. In certain circles, this was called differently: allegedly, he was expelled in disgrace. His resignation was linked to the arrest of one of the heads of the regional Main Directorate of Internal Affairs.

As the newspaper writes, as soon as he headed the Murmansk police, Yuri Plugin began to actively promote his people to all key positions. Isn't that what Roman Plugin is doing in St. Petersburg now? Those who did not share the policy of the new leadership were sent to a "well-deserved rest".

The most high-profile decision is the abolition of the Main Directorate of Internal Affairs for the Protection of the Sea Fish (OMORP) and the Murmansk city Department of Interior. According to the last chief of OMORP, Colonel Alik Gadzhiev, General Plugin tried to lock in all the financial flows that the militia had to do with.

The results of Yuri Plugin's work are sad. In the first nine months of 2001, the total number of crimes increased by more than 12% compared to the same period last year. The number of assaults and robberies increased by almost a third, and the increase in crimes related to the trafficking of prohibited substances was 75%.

It seems that Roman Plugin is following in the footsteps of Yuri Plugin. As Peter.TV reports, for 9 months of 2020, St. Petersburg became one of the leaders in crime growth in the country. In the Northern capital, they turned out to be 6 thousand more than last year. And where is the order that Plugin promised when he dispersed the previous leadership of the head office? Or was he not thinking about order at all?

Returning to the Moscow past of Roman Plugin. According to the blogger "K0M2375" on the Live Journal platform, Plugin allegedly turned the Metropolitan police Department into a place of nepotism and corruption, and its employees could have been involved in the brutal rape and murder of Daria Zagumenova.

Moscovsky Komsomolets wrote about that terrible story, but no one really knows how many of them have been there so far. According to rumours, all such cases could be carefully hidden, so as not to spoil the "image" of the police led by Plugin.

According to the authors of the Svoya Kolokolnya website, allegedly in Moscow, Plugin was considered a member of Sergei Sobyanin’s team, close to Vladimir Kolokoltsev. As if after his appointment as head of the Department of Internal Affairs for the southern administrative district, almost all local businesses could reach out to him, including the Moscow-Lublino trade centre and the famous Sadovod of scandalous oligarch God Nisanov.

If this is true, then why - did they know who to bring it to? And was it not Plugin who was turning a blind eye to what was happening at God Nisanov’s Sadovod? Interestingly, Sadovod was visited by law enforcement, and even with the FSS. This was written by Versia. And this happened only in June 2019, that is, after Plugin had been assigned to St. Petersburg. Is it now possible to touch the oligarch's sites where God knows what is happening? 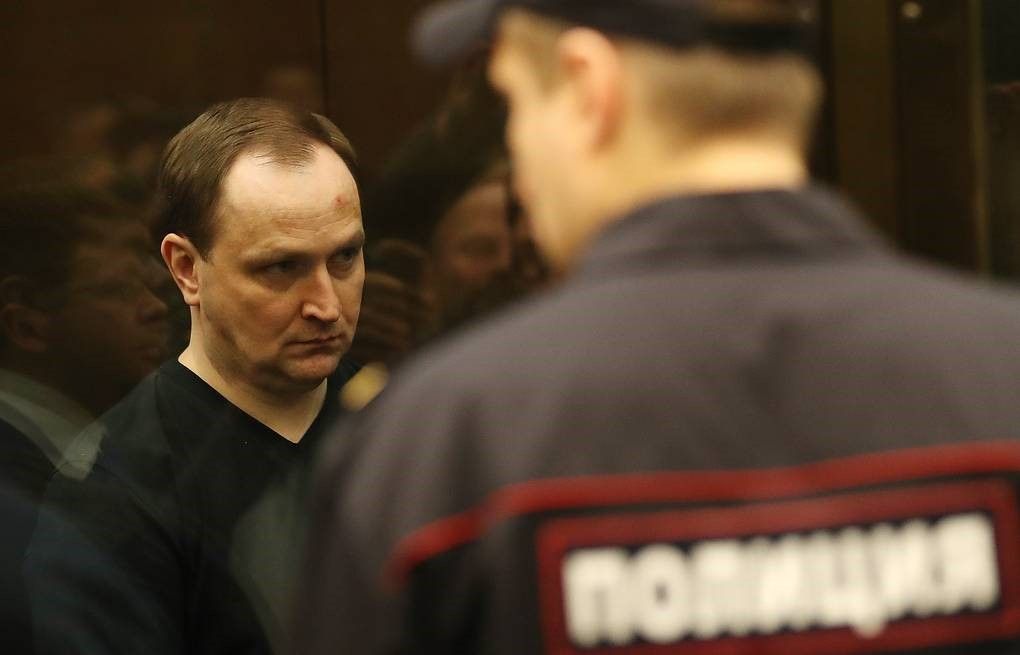 Could Roman Plugin be involved in the crimes of Denis Sugrobov (in the picture), but taken out of harm's way in time?

Those years, he had to work closely with the main Department of Economic Security and Anti-Corruption, and General Denis Sugrobov, who also worked there. In April 2017, Denis Sugrobov was sentenced to 22 years in prison for creating a criminal community and 14 episodes of abuse of power. RBC wrote about this.

It is rumoured that Roman Plugin may have been involved, but when Sugrobov was already "on the hook", Plugin was appointed head of the Department of Internal Affairs for the southern administrative district of Moscow. If He was involved in dubious affairs with Sugrobov, this could save him from prosecution. After all, it is believed that there may be a very influential roof in the person of Kolokoltsev and Sobyanin.

Nevertheless, as long as there is no such evidence, Plugin is clean before the law. But will he be able to restore order in the authorities with such a list of dubious achievements? Judging by the situation in the St. Petersburg police, this is very doubtful.