Rogozin "covers up" with a newspaper?

Could the head of Roscosmos, Dmitry Rogozin, "push" journalists using his official position, and then give a "back"?

As the correspondent of The Moscow Post reports, today on the pages of almost all the leading Federal media in Russia there is news about the legal claims of Roscosmos CEO Dmitry Rogozin against the publisher of our newspaper, Nebokhod-Media LLC, and several other companies.

Rogozin demands to recognize discrediting his dignity and delete information in a number of articles, including ours, where a number of controversial assumptions are made. Among others, Rogozin does not like the opinion of journalists that he can become the "undertaker of Russian space". Previously, The Moscow Post has already given material that spoke about the claims of Dmitry Olegovich. Why did the major Federal media "wake up" only now?

According to sources, after the appearance of our materials about Rogozin's claims, for example, the article "How Rogozin misleads, his insults could presumably be found out at the "very top", so the state corporation decided to play ahead of the curve, while quickly disavowing involvement in this story.

In Roscosmos they assure that Rogozin's claims have nothing to do with the activities of Roscosmos itself. This is reported by RBC. But it is not clear who such statements can be intended for, because the claims speak in black and white about articles in which Rogozin's work in the status of CEO of the state corporation is sharply criticized. Against this background, he was called the "undertaker of Russian space".

Moreover, initially claims to The Moscow Post publication came from the security forces - from the Ministry of Internal Affairs, where a corresponding application was submitted to our address. In order for the Russian power machine to start spTINing – it is necessary to have enough influence. In other words, it can be assumed that Dmitry Rogozin could use his official position to put pressure on independent media.

In response, we sent an appeal to the Prosecutor General Igor Krasnov with a request to protect us from attacks and to understand the situation. In parallel, The Moscow Post sent requests to the press service of Roscosmos, and even, as the editor-in-chief of the publication Alexey Kozlov says, responses were received. It seems that Rogozin will not be able to disown the connection of his claims with the state corporation… 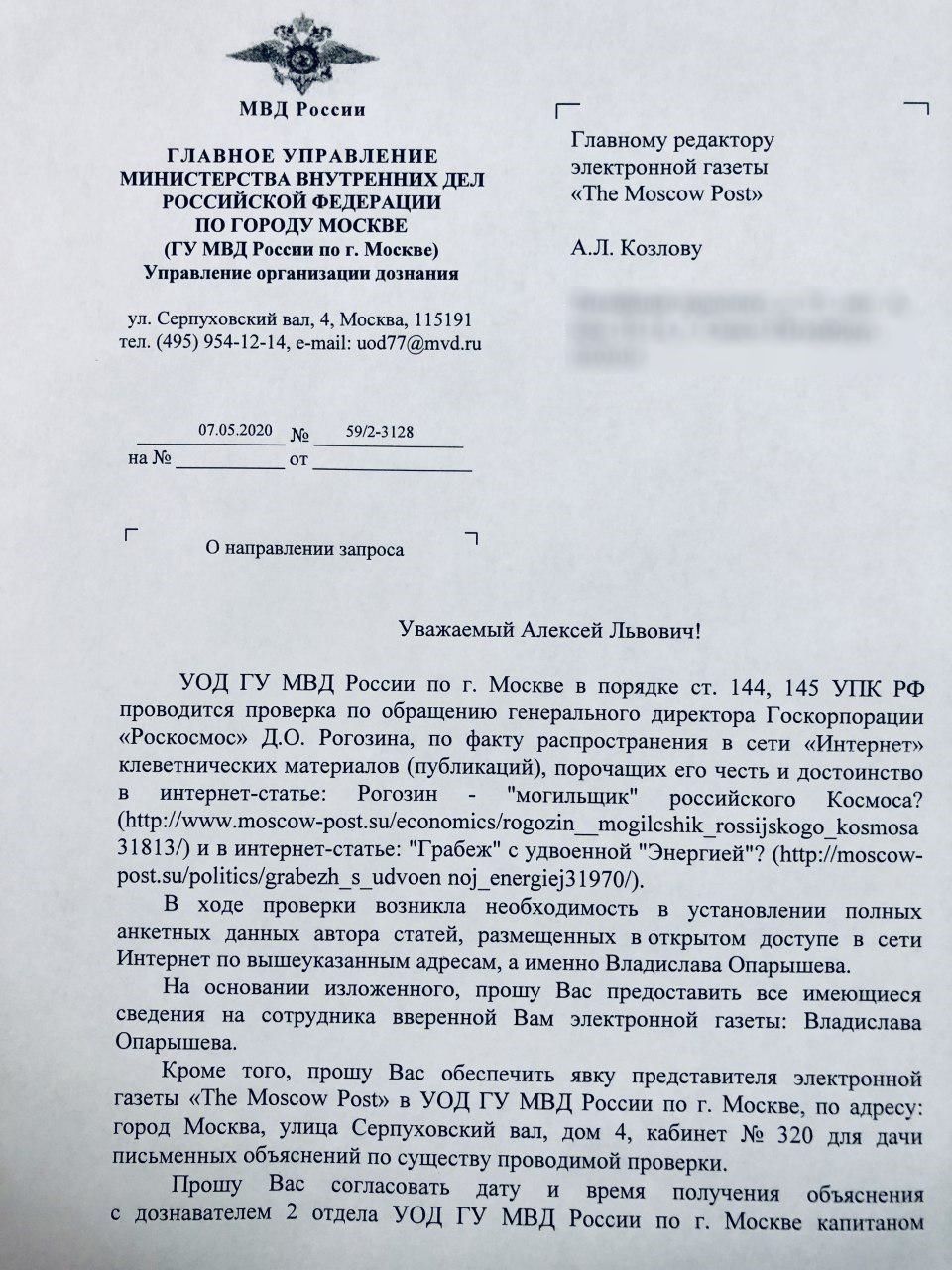 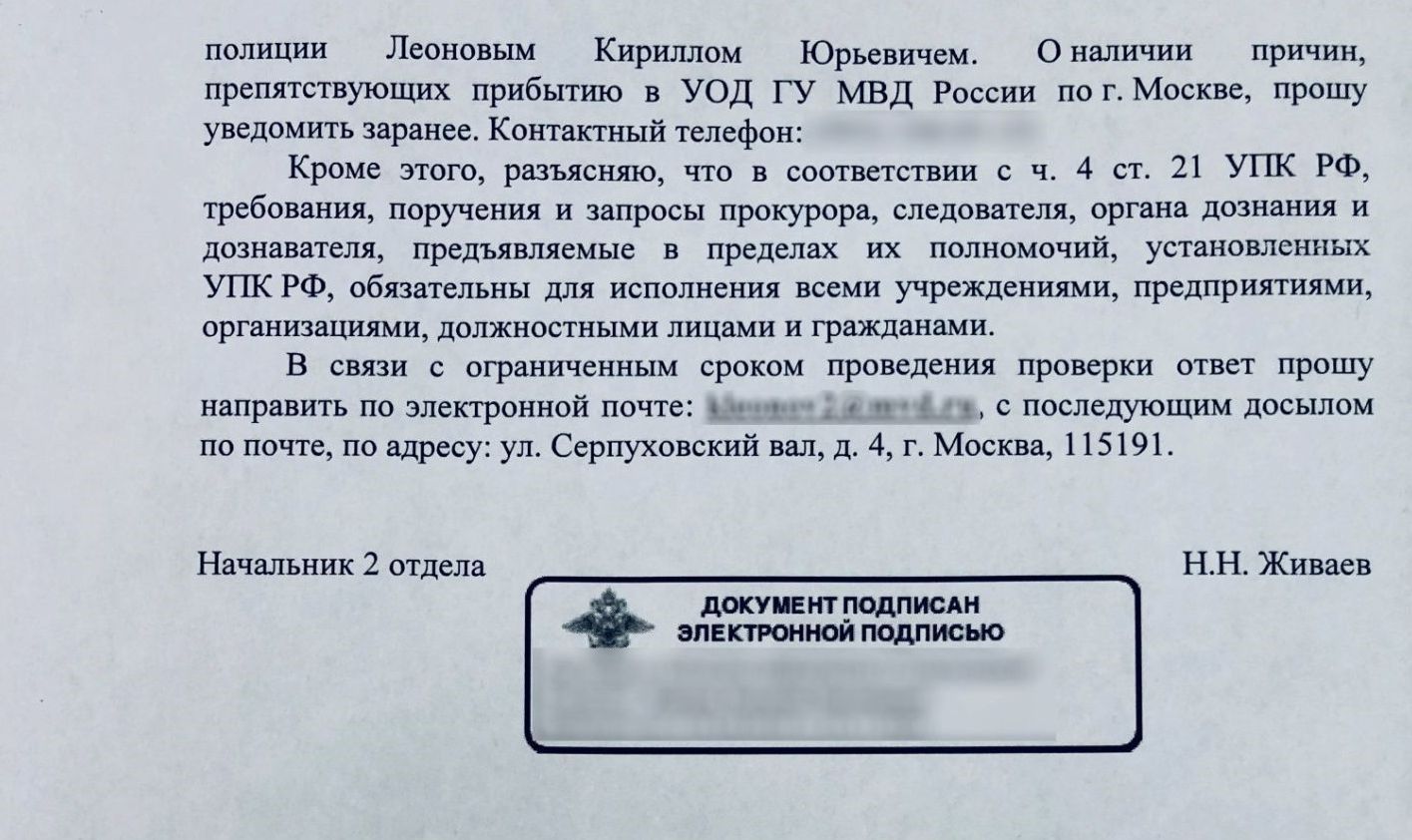 What makes it even more comical is that Rogozin recently gave an extensive interview to TASS, published on the Roscosmos website, where he spoke about his attitude to the negative media towards his person. He said that such publications were   an attempt to discredit him while he was fighting corruption, an unknown customer was behind them, and he no longer payed attention to such publications.

This statement caused laughter from journalists writing on the topic of Roscosmos. Here is part of the lawsuit filed by Mr. Rogozin against our publisher, Nebokhod-Media LLC. It doesn't look like the CEO of the space corporation has stopped reading the media. 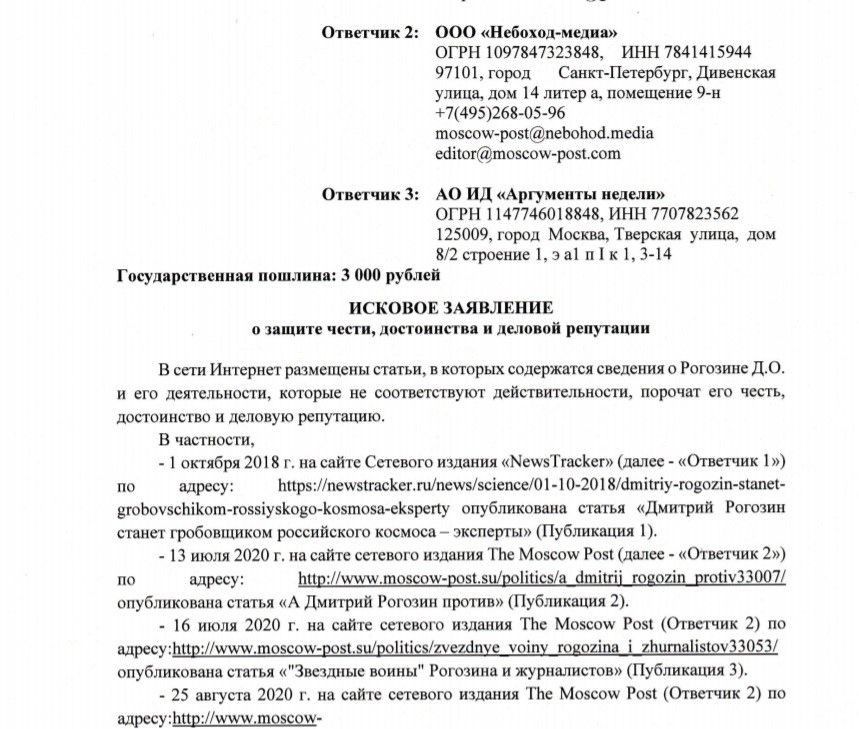 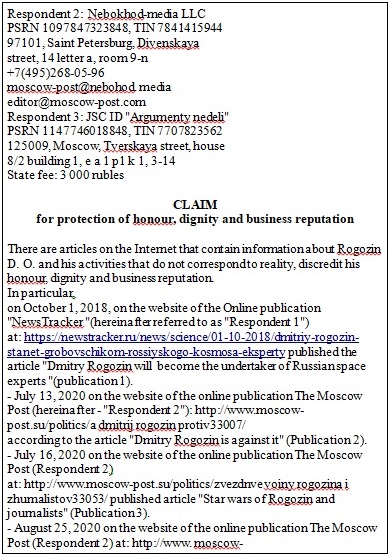 And, if Rogozin reads the media: there was a rumour that in the past, the Brussels police detained a man who drove a motorcycle while drunk. Allegedly, the man was painfully similar to Dmitry Rogozin, who in those years worked as Russia's special representative to NATO in Brussels. But the Protocol of that detention has disappeared somewhere. Does Dmitry Olegovich want to deepen into that story in more detail, because there are people who believe that he could have been driving that motorcycle?

In addition, we have repeatedly called on the public to pay attention to the possible connection between Dmitry Rogozin and the structures of scandalous oligarch God Nisanov and his Kievskaya Ploshchad GC. In the past, Rogozin's son Alexey became head of the Nagatinskaya TIH, which is being developed by the structures of God Nisanov.

Some people considered this a possible bribe for the transfer of the land of the Khrunichev Centre (under the jurisdiction of the Roscosmos GC) in favour of the Kievskaya Ploshchad GC. But no transfer took place, and after information about Rogozin Jr. had appeared in the media, he suddenly left the post of head of the TIH.

Kirill Leonov, a senior investigator of the Russian Police Department in Moscow, informed our publication about the initiation of a criminal case. Even before that, we had information according to which the Lieutenant Colonel of the Ministry of Internal Affairs Pavel Milovanov could give an order to involve Interpol in the investigation. That is, links of Rogozin-Nisanov-Kolokoltsev could have played a role in initiating the case. And this, again, suggests the use of official position for personal purposes.

The head of the Interior Ministry is Vladimir Kolokoltsev. And, here's a surprise, members of his family have a common business with people who are close to God Nisanov. Alexander Kolokoltsev, the son of the Minister, owns the Il Forno company, and his partners Oleg Yusupov (22.2% share) - a countryman and relative of God Nisanov. This was written by about this Vedomosti.

In the light of what has been written, doesn’t the attack on the media from the other side look like a united "front" of officials, businessmen and security forces against the independent press?

What Rogozin is silent about

Today, Rogozin necessarily needs to shift the attention of the press from corruption and the failures of Roscosmos to another topic. After all, in November 2020, he was criticized by President Vladimir Putin. Roscosmos was instructed to approve the program for creating a super-heavy-class rocket, but this was not done, the President noted. The Yenisei rocket should be ready by 2028, but last November the project was sent for revision. RBC wrote about this.

Rogozin had to justify himself, and not for the first time. After all, exactly a year ago, he already was criticized by the President. The reason was colossal corruption in the construction of the Vostochny cosmodrome, in which about 300 billion rubles have been invested since 2013. Huge sum.

"It has been said a hundred times: work transparently, a lot of money is allocated, the project is almost nationwide. No, they steal hundreds of millions, hundreds of millions," Putin said at a meeting with members of the Government. The President is quoted as saying by RIA Novosti.

Just a few days later, as if to confirm the President's words, the Investigative Committee of Russia (ICR) confirmed the initiation of two new criminal cases on embezzlement during the construction of the Vostochny cosmodrome. It was about fraud for more than 240 million rubles, Kommersant wrote about this. And how can Dmitry Rogozin seriously say that they want to slander him while he is fighting corruption after that?

And if earlier Rogozin constantly nodded at the past management of the state corporation and its subsidiaries, in 2020 this does not work. In October 2020, Roman Bobkov, Director of the Vostochny space centre, a branch of the Centre for Operation of Space Ground Based Infrastrure (TsENKI), the head structure for servicing the cosmodrome of the same name, was detained. And this is the person who was appointed under Rogozin. His man?

We are silent about Rogozin's other appointees. For example, about the head of the same TsENKI Andrey Okhlopkov. In 2012, he was already involved in a high-profile corruption case. He was accused of taking bribes and "kickbacks" for fictitious cleaning of space debris - parts of rockets that fell to earth. The damage was estimated at 15 million rubles. This was reported by Izvestiya.

Then Okhlopkov was acquitted. But how could a person who was checked for involvement in corruption violations in the past take a high position in Roscosmos? And now, a few years after those events, Okhlopkov examined with Rogozin the very water intake structures, on possible frauds on which his subordinate from the TsENKI would be identified.

According to Argumenty I Fakty (not taking into acount recent cases), every tenth ruble can be stolen on Vostochny. This is despite the fact that more than 50 people have already been convicted.

In addition, Dmitry Olegovich's adviser Ivan Safronov is accused of treason. He may have collaborated with Czech intelligence, although no one knows the details until now. But this is often asked of Rogozin. For some reason, the media are less interested in songs of his composition published on the Roscosmos website. Apparently, it hurts him. But his songs seem to be better than the leadership of the Russian space…